We’re in Portillo, Chile, for the latest edition of Chris Davenport’s ‘Ski with the Superstars’ camp. Scared? Us?!

We’ll spend tomorrow morning free-skiing, then we’ll put you into groups. So relax, have fun, get to know the area, and the coaches will ride with you throughout the day,”

says Chris Davenport, one of the world’s top big-mountain skiers.

That all sounds fine, except the stellar coach line-up Chris is talking about consists of Mike Douglas (the man who invented the world’s first twin-tip ski, the Salomon 1080), Wendy Fisher (one the world’s best extreme skiers for nearly a decade), Ingrid Backstrom (no introduction needed) and Cody Townsend (just downright rad; Google ‘The Crack, Alaska’ if you’re not familiar with this mad-man’s work).

We’re in Portillo, Chile, for the 14th edition of Chris’ ‘Ski with the Superstars’ camp. It’s mid-August, and while the UK is sweltering, Portillo is in the grip of a chilly drought and the snow levels are so unusually low that for the first time ever Chris has had a few last-minute cancellations.

Dinner in Hotel Portillo’s wood-panelled dining room, where ski teams from around the globe have convened to eat while summer training. There are nearly 30 ‘campers’ aged between 12 and 71 – though in the main we’re in our late 30s and 40s, avid skiers, and the camaraderie starts now.

I’m in bed, breathless from walking up three flights of stairs. In his opening talk, Chris had banned us all from taking the lift (“we’re athletes”). We’d been warned in the weeks leading up to the camp to get fit; Portillo is high (the base is at nearly 3000m) and the terrain steep. I live at sea level… While not exactly an ‘extreme’ ski camp, this week is billed as a place to ski hard – and in his pre-camp emails, Chris made no bones about the kind of shape he expected us all to be in: “No-one ever arrived too fit, and if you’re carrying a little extra post-season weight, get rid of it.” Gulp.

I’m awe-struck watching Cody ski a piste. Aggressive doesn’t cover his style; while I’m skiing a new pair of skis I bought without testing and couldn’t feel less comfortable if I tried.

I fit in with a group skiing with Wendy Fisher; she’s so welcoming, rather like a mother hen. Albeit a mad one. Skiing in Portillo is surreal, set around Laguna del Inca. There are just 14 lifts, and we’re high – the ski area extends to 3310m. With 500 hectares of skiable terrain, and a lot of hike-to nooks and crannies, it’s one heck of a playground. 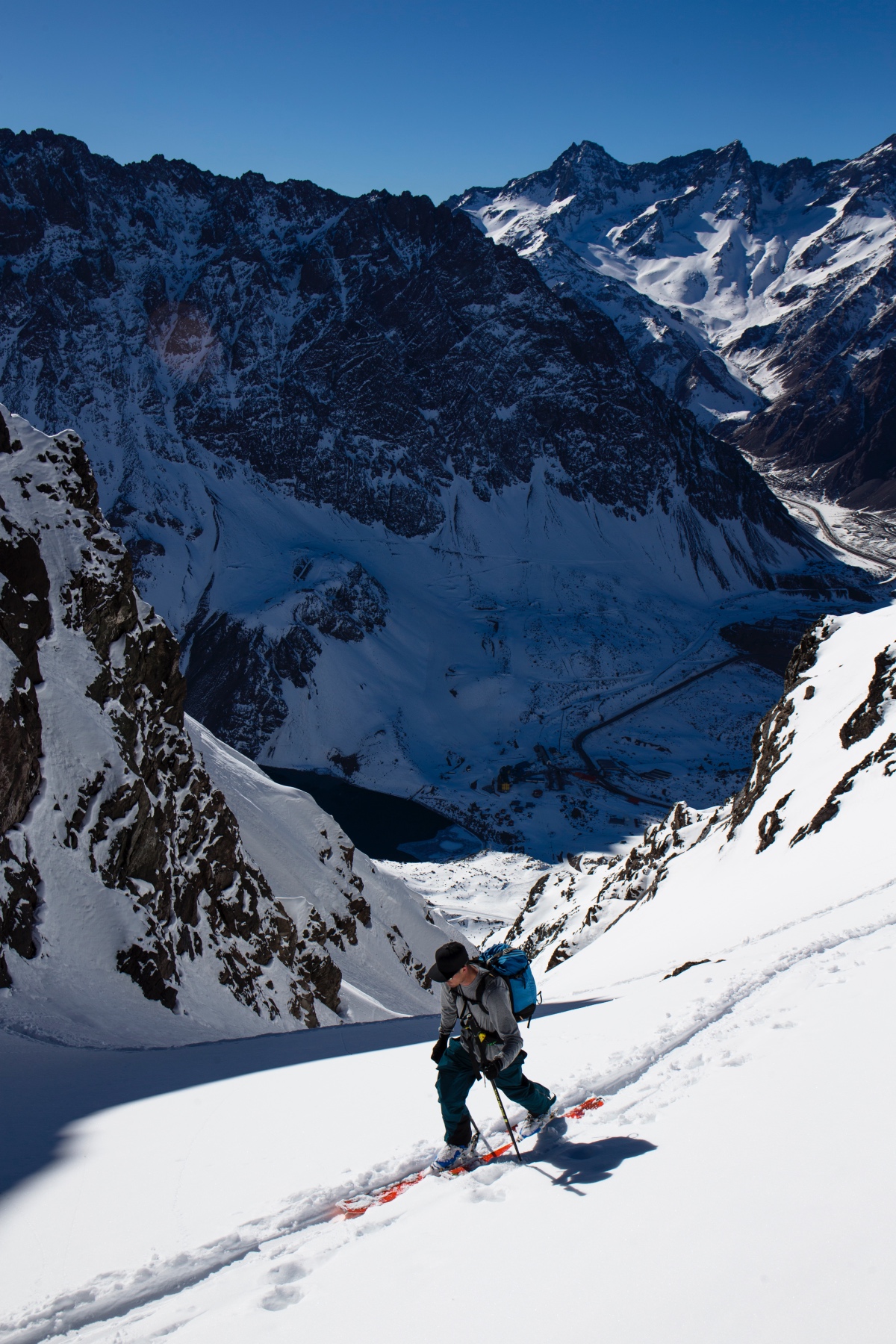 Ingrid is arriving late after a family emergency, so my group and I spend day two with Michael, a Portillo ski instructor. I’m still skiing like an idiot. He tells me to give it 100% rather than the 75% I’m currently offering – I switch mode and am encouraged by the look of surprise on his face. Feeling more confident, we spend much of the day skiing Shane’s run, a short but fun pitched run named after the late Shane McConkey – a founding coach of the Superstars camp.

I feel like I’ve been skiing with Cody forever. Yes, it’s low-tide, and the powder isn’t quite as we’d all hoped and dreamed – and there will be no skiing Portillo’s world-famous 50° Super C Couloir as a result – but we’re skiing hard. We’re doing piste drills (such as skiing with our boot buckles undone to encourage our weight forward) under Cody’s watchful eye; the man has never coached, but he’s doing a damned good job of making it up. He tells my fellow camper and now firm friend Anthony (from Jackson Hole): “Just ski harder, faster and… well, just ski better!” One of the gems of Cody’s unique teaching style.

Mike Douglas is cajoling me to go over the jump he’s built. Having had three knee operations I don’t voluntarily leave the ground these days, but the presence of such a great leaves me little option. I don’t try to ‘pop a 3’.

I’m dancing on the bar in the Hotel Portillo, with Wendy to my left and fellow camper Jacqueline to my right. Jacky (from Zurich) and I turned up with exactly the same skis and bindings, and bonded immediately. Brazilian sugar cane farmer (and shredmaster) Tici is looking on with amused disbelief – the way these Euros behave. It’s Jesse Hoffman’s birthday and we all get a little carried away.

I’m tired from the night before, but I’m not alone. Because Portillo is set so high up in the Valparaíso region of the Andes, most of us are struggling to sleep (insomnia is a common symptom of altitude sickness). Wendy Fisher is no exception: “I only manage two or three hours’ sleep a night here,” she tells me, but copes with it in the way you’d expect one of the world’s best extreme skiers to: she hangs out in Portillo’s bar, dancing on tables until 4am most nights.

It’s snowing and these coaches know where to find the goods. Wendy takes us up the Las Lomas, a type of button lift that five skiers ride at the same time, one that is quite unique to this ski resort. We are headed for powder on a gentle pitch skier’s right of the lift. Wendy works hard

at getting our group to use the front of our skis: “On a $1,000 pair of skis, $800 of that real-estate is in the tips,” she says – and pushes us harder and harder to get our weight forward. I feel my skiing growing ever more confident under her watchful gaze and encouragement.

We’re in the hotel’s cinema for a screening of Mike Douglas’ Fountain of Youth film, which is released a few months later by Salomon TV. It’s incredibly moving.

Despite making the most of the spring-like corn snow, we’ve woken up to a foot of fresh, giving us all that’s needed to enjoy the steep, wide powder bowls on either side of the valley in which Portillo sits. Chris – or ‘Dav’ – leads us across El Estadio, Travesía and Kilometro Lanzada, a series of bowls skier’s left of the Roca Jack button lift.

It’s the farewell dinner at La Posada, a restaurant across from the hotel. I choose the most enormous steak and the Chilean red is flowing. Awards are given away for excellence throughout the week. I’m sitting opposite Cody and he’s regaling all of us with his tales of hair-raising escapades once again. Someone starts to throw bread rolls… 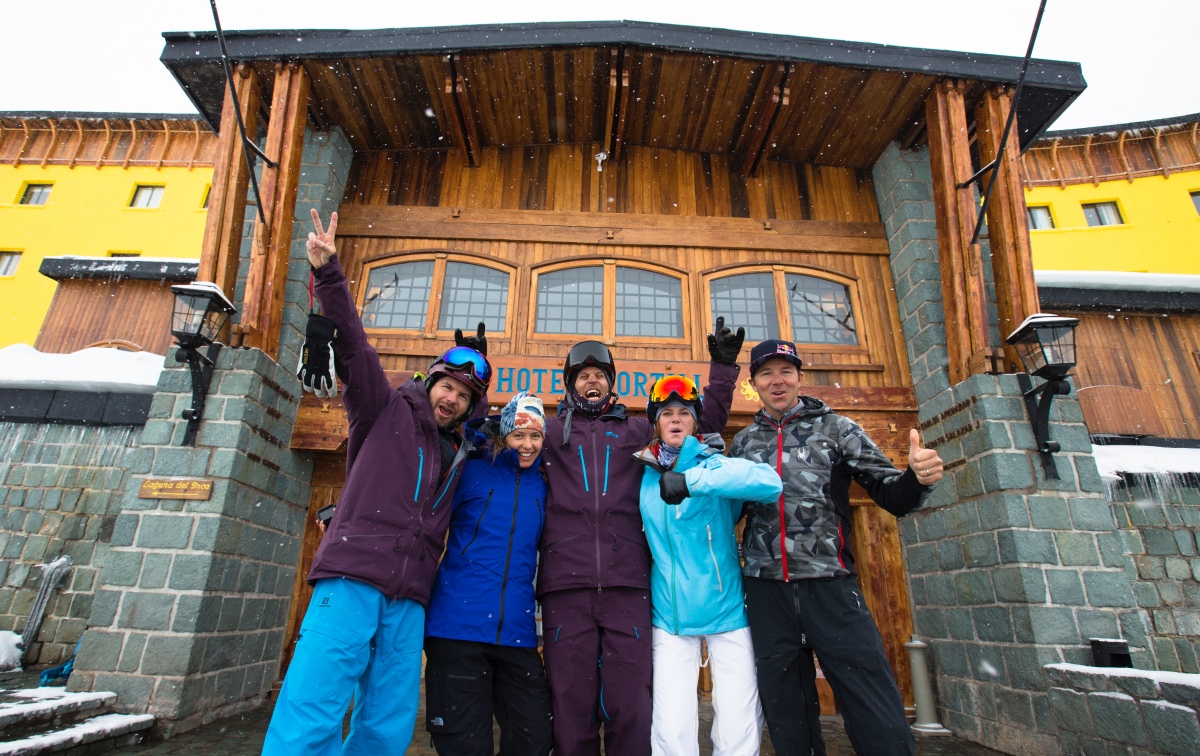 The party continues in Portillo’s bar to a live band and then onto the hotel’s night club. It then continues back at La Posada where a select few of us are still standing.

I climb into bed.

My taxi arrives and I’m not sure whether it’s the hangover, lack of sleep or genuine emotion, but I find myself shedding a tear of sadness as we make our way down the iconic switchbacks of the Uspallata Pass, joining the huge trucks transporting freight from Los Andes to Mendoza.

I know I’ll never afford to go back, but this camp, and Portillo, will remain forever etched in my memory.

The Ultimate Travel Company (theultimatetravelcompany.co.uk) offers an 11-day trip to Chile, including one-night’s B&B at Luciano K in Santiago (two hours’ drive from Portillo), a city tour, transfers, plus a seven-night package at Ski Portillo with accommodation, ski passes and all meals. Prices start from £3,350pp and include direct flights from the UK with British Airways.

Chris Davenport’s Superstars Camp costs US$2,900 (£2,070), including accommodation, meals, tuition and an epic goodie bag from each of the coaches’ sponsors. For the 2018 dates keep an eye on the Ski Portillo website and for more details visit chrisdavenport.com.

Does skiing in Chile float your boat?

Here’s what else South American skiing can offer…

HOW TO SKI CHILE ON A BUDGET

INTRODUCING THE MOST FAMOUS CHAIRLIFT IN THE ANDES