Might there be a skiing equivalent of Stockholm syndrome? Because for once – after clearly being held captive by this section for far too long – I’m desperate to be involved in the action, rather than fleeing from it, as happens most months.

Sun and steeps, plus perfect skies and powdery slots: can there be a headier mix? And as a result, whenever I look at this most glorious part of Glarus (a Swiss city and canton) from long-time Fall-Line collaborator Ruedi Flück, a maniacal smile spreads across my face, and rather worryingly the tune from The Banana Splits begins in my brain.

Is it because the couloirs look a bit like the elongated yellow fruit? Is it a mid-life crisis intent on sending me back four decades to when I was six, dancing madly in front of the TV whenever the Hanna-Barbera creation came on?

Who knows, or cares, as I don’t remember much skiing in the show? All that I’m sure of is that the middle chute would be mine – probably while singing Tra-La-La La-La-La (Google it, Millennials!) – with my long-time ski pals Zak and Trav left to fight it out over the exposed left (not keen on that drop) and risky right (is that a sneak, or does it just end early?).

To his credit, Sämi Ortlieb, the skier/supremo behind it all, does not miss a beat when I mention my, er, Banana Splits thesis. “I really like it,” says the 29-year-old, who’s at least a decade too young to have a clue what I’m warbling on about. “We have not had a name for it yet,” he adds, “but that fits really well”.

As to the work, and time, involved in getting this standout shot, let’s just say more than you might think, despite it looking one of the easier, more accessible WTF?!s we’ve featured. “Oh yes,” says Sämi, who’s no relation to the famous Alpine skiing Ortlieb family of World and Olympic champion Patrick, or World Cup winning daughter Nina. “We’ve been looking at this spot for a while. We actually first tried three years ago in spring, but the conditions were not safe enough…”

With good light and clear skies also a prerequisite for the perfect picture, as well as the aforementioned reduced avalanche risk, it was not until March 2021 that the elements aligned for another attempt. “Meet in the car park, and be ready to go by 4.40am I was told just one or two days before the mission,” says photographer Ruedi. “I had to get up at 2.30am to reach that place from my home in Meikirch, over 200km west, so it was a long day… but worth it!”

As to pitch and difficulty of the couloirs, Line skis-sponsored Sämi estimates the runs at about 300 metres with 35-40° steepness. When pressed to analyse things on the Ortlieb scale of difficulty, as I absurdly call it (with 1/100 being super easy, and 99/100 being impossible) he gives it a solid 60. “It’s more about patience with this one,” he says, “waiting for the right conditions, evaluating the risks and not letting the pressure (of getting the picture) influence you.”

Should this inherent danger have failed to dim your enthusiasm, maybe the four-and-a-half-hour skin that you have to begin in the middle of the night to ensure the snow’s stable will.

As a result, instead of feeling pride or wonder when he sees the image, our favourite Ortlieb says: “I just hear Janic (Cathomen, who skied the slot on the right) singing a stupid après-ski song at 3.30am when we are leaving the house!”

What else? Walkie-talkies to ensure perfect harmony – and timing – on the descent (“we were each in our own shoot, not able to see each other,” says Sämi), then schnapps and snacks at the bottom for the already-named crew, plus Domi Rhyer who took the left lane.

“Oh, and then we skied back down the valley and went for some kebabs to celebrate,” he adds. Hard not to be a little jealous of this one we say… 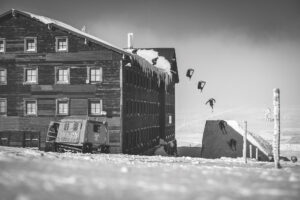 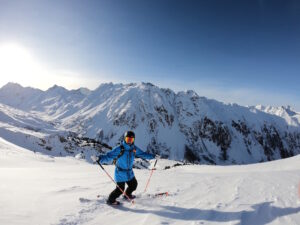 How to shoot the perfect ski photo 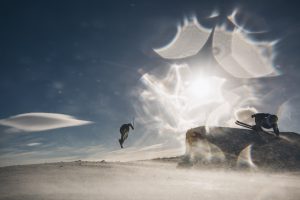