The 27-year-old made headlines when he became the first person to send Corbet’s Couloir on a sit-ski. Since then he’s been pushing the boundaries of what’s possible on snow. Matt Masson talks to Trevor about his accident, who inspires him and why he’ll always keep pushing himself 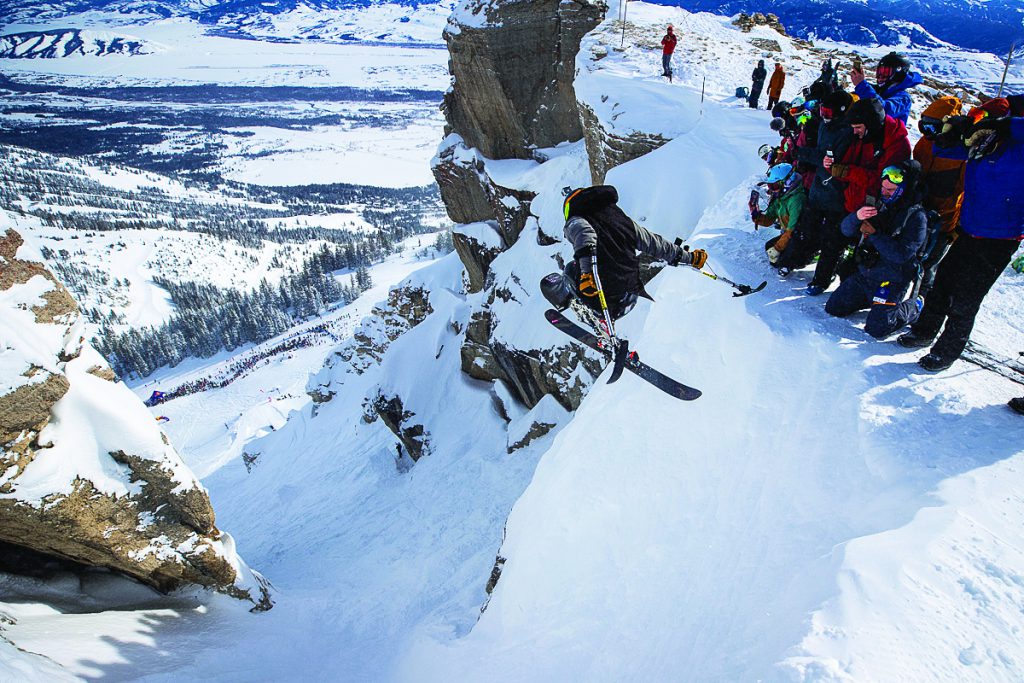 Matt Masson: How did you first got into snowboarding as a kid – what did you love about it?

Trevor Kennison: I grew up in Keene, New Hampshire. My dad first introduced me to snowboarding when I was about five-years-old. He had a snowboard and skateboard shop and I remember him taking me up to Okemo or Stratton every Friday. I obviously loved skipping school and going to the mountain, but more than anything I just really enjoyed the whole culture of it.

MM: Tell us about your accident – what happened?

TK: It was 15 November, 2014. I was snowboarding with a couple buddies in the backcountry in Vail, Colorado. It was about 3pm and we decided to build a jump, but there was not enough time and the snowpack wasn’t good. Then these kids told us about another jump further up. We hiked up to hit it. I caught an edge right off the jump, flew through the air and tucked my neck. When I tucked my neck, I ended up landing on my back. I heard a loud pop and that was my vertebrae burst-fracturing.

I lay there from 4pm to 7:30pm, in a blizzard, waiting for search and rescue to reach me. They shot me up with morphine, lifted me into a toboggan, onto the cat-track and into a sled. I was then driven to Frisco Hospital, where I found out that I had shattered my T11 and T12, punctured my spinal cord and dislocated my back. I ended up getting surgery the next day, my vertebrae were fused from T8 to L2. The doctors told me straight away that I’d never walk again, so I’m very thankful to even be alive, let alone to have what I have now. 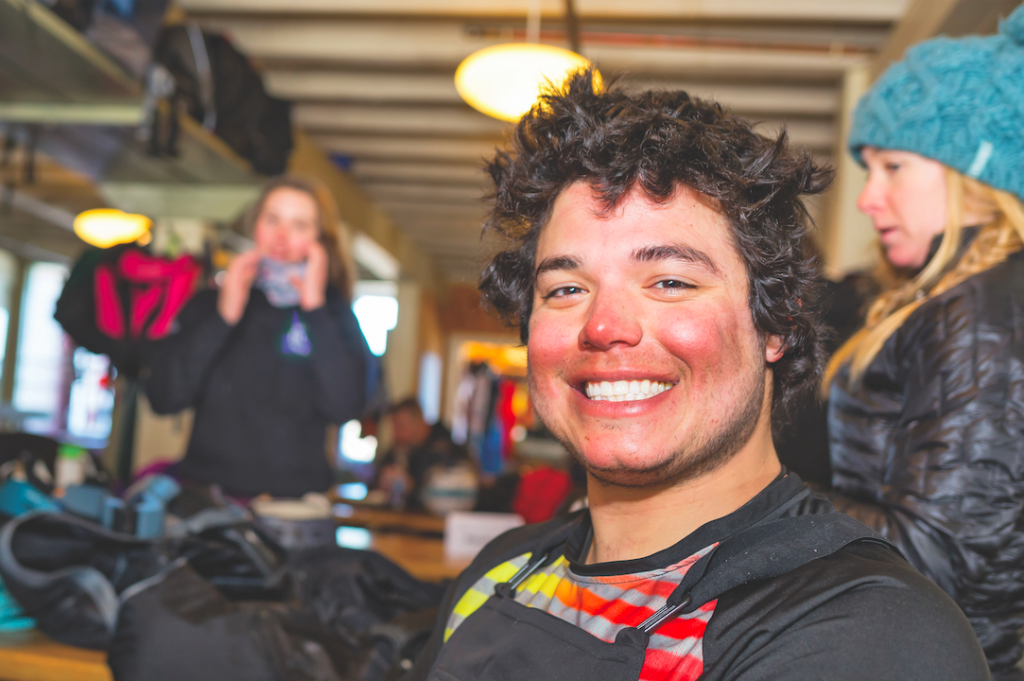 MM: What were your first thoughts, as you lay in the snow?

TK: My immediate thought was that I didn’t want to get back pain pills [Trevor had just recovered from a shoulder surgery and struggled to wean himself off the painkillers]; I didn’t want to lose my plumbing job. I had a girlfriend, and I dreaded telling her and my parents and sister what had happened. Being in a wheelchair never really crossed my mind. I just had no experience of it – I never knew anyone in a wheelchair. I just thought: ‘Oh sh*t, I’m losing all this stuff! And won’t be able to snowboard all the time!’

MM: Talk us through your recovery…

TK: I did five weeks at Craig Hospital [a specialist hospital in Englewood, Colorado, for people affected by spinal cord and brain injuries], which was a huge part of my initial recovery. After that I drove myself out of the hospital – I had already gotten hand controls fitted – and lived in a hotel for five days. I then found a room to rent back home in Keene and I started going to physiotherapy.

After that I concentrated on going to the gym to build my confidence, and to learn to stand and walk again with leg braces. 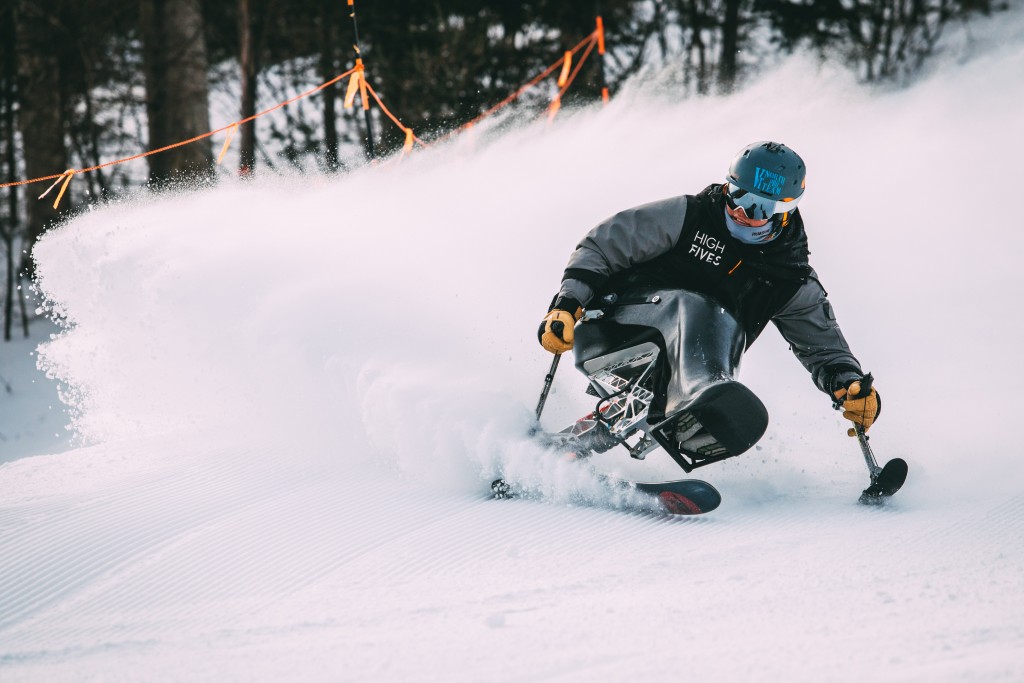 MM: How did the idea of sit-skiing came about?

TK: I knew there was a chance to get back on snow, but I was busy doing wheelchair basketball and loving it. Then, in 2016, my sister and brother-in-law got me out on the slopes for the first time since the accident; they got me a grant at Challenge Aspen, which landed me my first day sit-skiing. I wasn’t that stoked to try it – it wasn’t that I was scared to get back on the hill, but I was just enjoying basketball so much. It snowed like a foot that first day. When they got me on the slopes and had my first taste of sit-skiing, it was just ‘game over dude!’ I didn’t want to drive four hours, and pass like 15 mountains, to go to a gym to play basketball [when I could ski instead]. I ended up falling in love with it.

MM: Did you start pushing yourself fairly quickly?

TK: Well, that February I ended up going on a week-long-trip to Crested Butte, through Craig Hospital. It was my alumni trip and my goal was to ski black diamonds by the Friday. It took me three days to get on one, which was obviously awesome! The whole experience: my instructor and me learning something new, I loved it. I’m always eager to learn stuff. Even if you get very good at what you do, you can always learn something new.

MM: What were the challenges you faced when learning to sit-ski?

TK: Not standing! [laughs] The challenges were just getting confident on it, learning how to use new equipment, facing forwards instead of sideways, my arms got super-tired… Even getting ready to get on the mountain is different. You have to learn how to get on a chairlift. But it’s all worth it; now, when I’m on the ski, I feel so free and just like everyone else. I feel alive again. 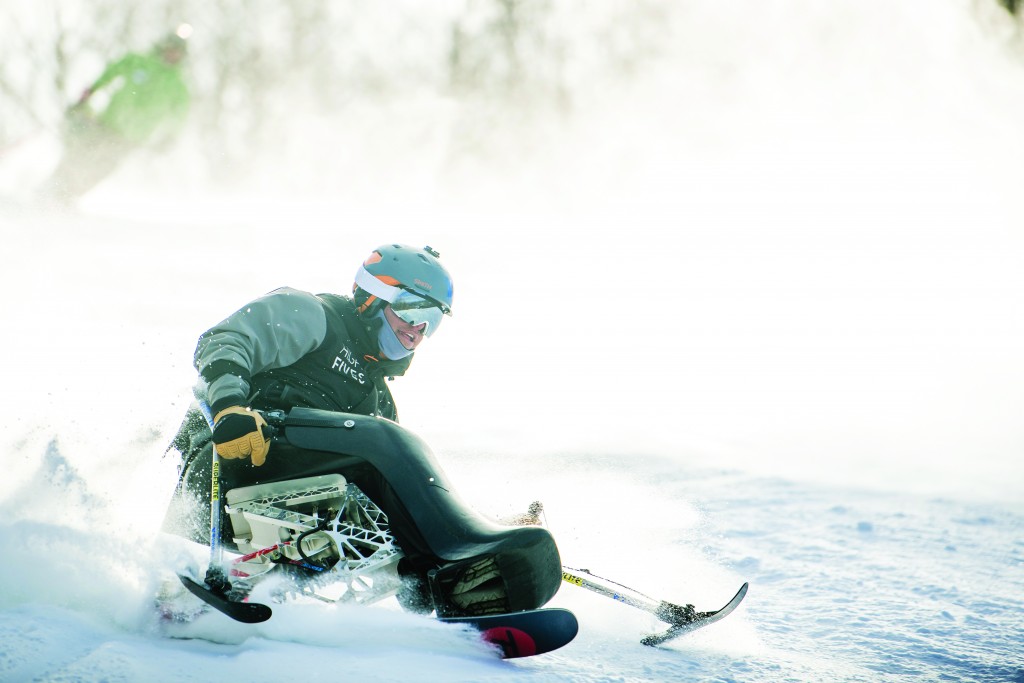 MM: Who are your idols/people who have influenced you the most?

TK: Roy Tuscany from the High Fives Foundation. [Roy is a freeskier who broke his back and started High Fives, a foundation that focuses on preventing life-altering injuries and provides resources and hope if they happen]. I look up to freeskiers Birk Irving a lot and Karl Fostvedt, and my sister also. I’ve been super-lucky to surround myself with a lot of great people. The pro skiers I’ve met, like Birk, Karl, Tanner Hall, Michelle Parker… it’s just really cool, them giving back to the sport like that.

MM: How did you earn a reputation as one of the world’s top sit-skiers?

TK: Honestly, I would just say that’s from skiing Corbet’s [Couloir]. A friend of a friend got an email about the 2019 Kings and Queens of Corbet’s contest and I ended up getting an invite. My preparations were pretty mellow – I just skied the day before and jumped off some cliffs! I wasn’t really scared at the top, maybe a bit nervous… the feeling afterwards was incredible.

Besides that, I just absolutely love the sport, that’s why I do it and that’s the only reason I do it. I heard that to become a professional in any sport it takes 10,000 hours of practice. I asked someone how I become a better skier? They told me to just put miles in; ever since then I’ve tried to ski every day for as long as possible and keep learning and learning and learning.

MM: What are your future plans / goals

TK: I would love to go down to New Zealand or Chile and just ski the whole year round. I went to Chile for my birthday last July and it was awesome. I’m also filming a two-year documentary with Josh Berman for Level 1, which I’m really excited about. 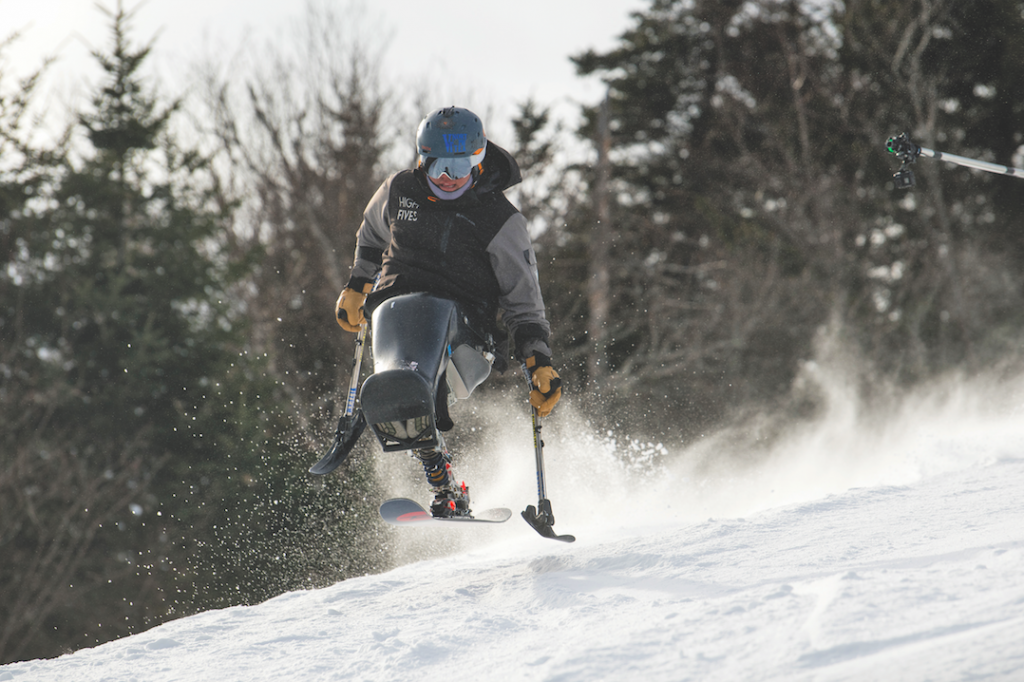