The USA ski mountaineer (not to be confused with the rock ‘n’ roll hellraiser of the same name) achieved a lifelong goal last year when he and his climbing partner Hilaree Nelson became the first people to ski the 7000-foot Lhotse Couloir, part of the Everest massif. Tristan Kennedy sat down with him find what went into it, both physically and mentally

Tristan Kennedy: Just to set the scene Jim, can you tell us where we are and what we’ve been up to today?

Jim Morrison: We’re on a boat in Svalbard, an archipelago in the Arctic Ocean north of continental Norway. Way up north. We just sailed down from the northernmost settlement in the world this morning to go skiing.

TK: It sounds pretty wild when you say it like that.

JM: Yeah, it was cool last night to be in big seas, and then this morning to wake up to the sun and have a clear day after a few days of clouds. Today really felt like being in the Arctic. You could see the different ranges when you got up high.

TK: Is this your first time here?

JM: It’s my first time in Svalbard, yeah. But I’ve been in the Arctic, up in northern Russia, and in Alaska a number of times. I’ve also been in Antarctica.

TK: How does this compare in terms of skiing in those places?

JM: It compares a little bit more closely to Antarctica actually – just in the topography of the mountains. There’s a little less snow here than what I’m used to in Alaska, where they get a ton of precipitation. The mountains here are a little different. We’re also not typically skiing right down to the bottom in those places, where as here we’re skiing right down to the water which is unique. It’s cool to get dropped off by a boat, put your skins on, and then ski right back to it.

TK: How did you start skiing, and when did get into the touring and ski mountaineering side of things?

JM: I started going to Lake Tahoe to ski from the San Francisco Bay Area, when I was six. My family made the pilgrimage almost every weekend in the winter. When I was in 9th grade I started rock climbing – I basically learned via reading books – and [by the time] I was 18 I was in the Sierra’s with rented crampons and ice axes climbing a 14,000ft peak for the first time to ski back down.

TK: How did the idea of the Lhotse Couloir (a narrow, unforgiving line, never-been-done line off the summit of the world’s fourth highest mountain) come about?

JM: I’ve been reading about the Western Cwm, Everest and Lhotse most of my life. I’ve always wanted to go to these mountains and ski down instead of just climbing up – so I’ve been working on this, truly, since I was a teenager. In 2015, Hilaree Nelson and I tried to climb and ski Makalu [the fifth highest mountain in the world at 8485m, in the Mahalangur Himalayas] with Adrian Ballinger and Emily Harrington, where we spent six weeks also talking about the Lhotse Couloir. It was only a matter of time and getting everything to line up before we finally gave it a shot.

TK: How do you prepare for something like that?

JM: I’ve been walking uphill and skiing down my entire life. Certainly we focused more on climbing up high to get acclimatised, and we used altitude tents from Hypoxico, but most of the training was just day-to-day life of playing in the mountains.

Before Lhotse I had lots of other amazing days in the mountains. Some favourites are the first American ascent and first ski descent of Papsura, the ‘Peak of Evil’, in the Indian Himalayas, then Messner Couloir on Denali [Alaska], followed by a climb off Denali’s Cassin ridge, all in a week. [Then] lots of firsts in Alaska, and a solid adventure on Mount Saint Elias, on the Yukon and Alaska border, back in 2002.

TK: Summiting an 8000m peak is already pretty crazy, but what was the actual skiing like?

JM: It was slow going at first because you’re at 28,000 feet. We would ski four of five turns and then stop and rest for about five minutes. There was all kinds of snow, a total mixed bag of tricks – three or four turns of powder and then wind-blown, and ice, and breakable crust. And then every now and then you’d look over and you’d think: “that’s Mount Everest!”

TK: You’ve talked about using oxygen on the climb, and how Hilaree was against it at first. What changed your minds?

JM: We were at a pretty high place and we were moving slowly and it just became obvious that if we didn’t use oxygen it would take a lot longer to get to the summit. I think we maybe could have done it, climbed the whole thing without oxygen and probably skied down too, but we’d been doing a lot of work in a very short period of time. We started climbing on 11 September 11 and we summited on 30 September. Putting in all the infrastructure – for a team of five sherpa and four of us (Hilaree and Jim, plus a filmer and a photographer] – that’s pretty wild. I felt like “why do we need to add another layer of risk”, and I was mostly focussed on the skiing.

TK: What’s going through your mind when you’re climbing in super-exposed conditions like that?

JM: I find I get into a focussed, present, almost meditative state when I’m climbing. Especially with exposure. You’re breathing and you’re climbing and you’re feeling your way through it – there’s not really any room for all those concerns or what we go through in our daily life; all the thoughts like “do I need to check my email”, and all the noise we live with – when you’re in that moment you have to just shed all that concern.

TK: Is that meditative state part of the appeal of a project like the Lhotse Couloir?

JM: Yeah to a big degree. I think the mountains have kind of rescued me. I’ve suffered some pretty serious loss in my life. I lost my wife and my children in a plane crash in 2011 [Jim’s wife, Katie, was piloting a light aircraft when it went down]. I only really found myself in a good place when I was back in the mountains, and I’ve continued to spend more and more time getting outdoors and getting back to that conscious, present state ever since. Planning a trip to Lhotse and doing the whole expedition put me in a really meditative, positive place. Having a target and going after it like that. I like that kind of hard challenge. Sometimes, it’s more the going after it than the actual doing it that I like.

TK: Obviously there’s the initial elation when you make it down safely, but is there an inevitable comedown, mentally, when something you’ve worked so hard on is done?

JM: Yeah for sure. I got a call from [pro snowboarder] Jeremy Jones, who’s a good friend of mine, a couple of weeks after I got home. He called to ask how I was doing, and if I was suffering from ‘PTSD’ – what he called “the Post Traumatic Stoke Disorder” [laughs]. It’s funny, but it’s very real. It’s hard to come back from an expedition. You put yourself in a whole other world and you’re very focussed on the simple tasks of melting water and cooking and hydrating and climbing and taking care of yourself. And then to come back and you see the girl at the store, and she has no idea what you’ve been doing for six weeks…

TK: So what was Jeremy’s prescription for Post Traumatic Stoke Disorder then?

JM: I think more of just taking care of yourself, and getting outside. You don’t have to be in the Himalayas to be in the mountains – you can be in the hills behind your house. There’s a quote by John Muir [celebrated US naturalist and the father of America’s National Parks] that I love: “In every walk with nature one receives more than one expects.” I get a lot out of it, especially living in North Lake Tahoe, in Tahoe City, it’s pretty nice. I’m very fortunate to live where I do.

JM: People kept asking that when I got home, and my first answer was “I just want to go and ski a lot of powder” [laughs]. And actually that’s really what I did. We went through a really exceptional winter [last season], and I skied some spicy lines.

5 couloirs you need to ski 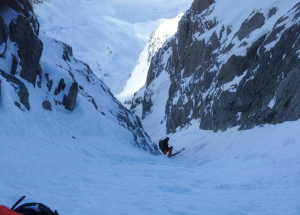 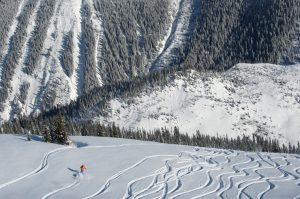