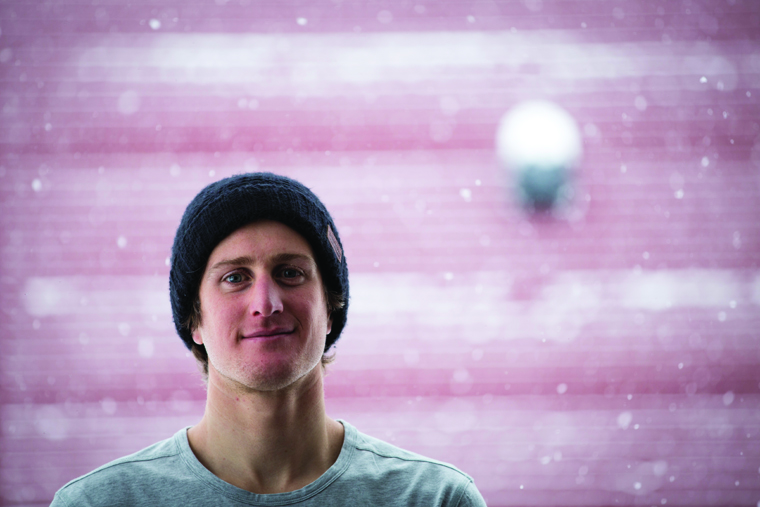 The big-mountain, big-air king from California tells Will Robson how a broken collarbone made an artist of him and shares his tips for making it as a pro skier

WR: Can you tell us about the thinking and technology behind this season’s Bent Chetler ski?

CB: Originally my goal was to create a ski that would help with any limitations I felt in my current skis by virtue of how I wanted to ski. The first generation was helping me portray the style of skiing I envisioned, so the following seasons have been an evolution of new technology that has become available, as well as improvements in performance I thought the skis could use, such as being lighter, changing flexes and performing better in variable snow.

WR: How does the ski reflect your own personality and riding style?

CB: Well, I’m not sure I’ve mastered how I really want to ski. I always have bigger  and better goals, but the ski has allowed me to be more creative and expand the way I see terrain.

WR: What kind of rider gets the most from this season’s Bent Chetler?

CB: Any powder skier, really. We were trying to create a ski that continually improved a skier’s ability in all types of soft snow. Although the ski skis great on hardpack, it is suited best to the person who is on the hunt for soft snow and natural terrain – a playful type. Tim Durtschi, Sage Cattabriga-Alosa and Nick McNutt are great examples. They are creative and talented riders with a great flow.

WR: How easy was it to persuade Atomic to let you design the graphics, not just the characteristics of the ski? Did you know what look you were going for?

CB: It came at a time when I least expected it. I was out for the early season due to a collarbone injury. So I had the time to hone in on my art skills and create a graphic.

I had never been a huge fan of my art, so initially I didn’t think I wanted the pressure of creating a graphic. However, I sent a rough version to Atomic and they loved it. It was a great lesson in finding a positive out of a negative situation.

WR: Future-gazing for a moment, can you predict which new technologies and materials are most likely to make the Bent Chetler even more fun to ride?

CB: Ha. I wish! If I had a crystal ball, I would have tapped into it sooner. I think innovation comes with limitation. The more I ski, and hopefully the better I get, I will find instances where the ski could perform better. When that happens I will bring attention to it, and discuss it with the engineers and brains at Atomic to see if we can create a solution. 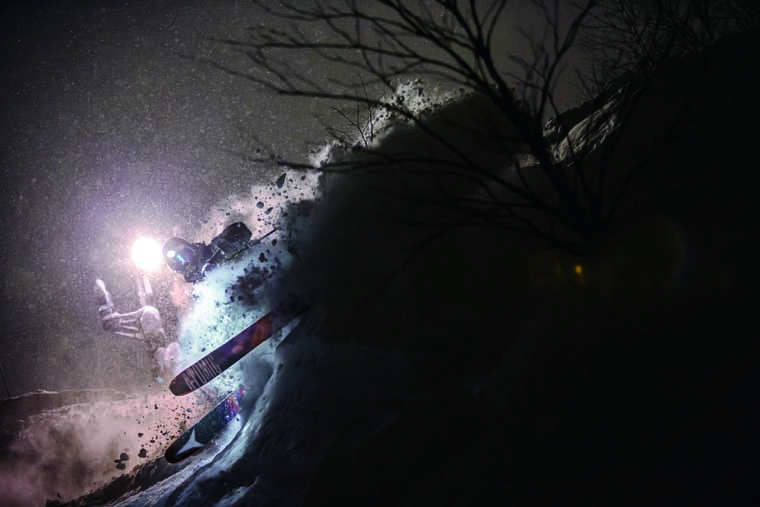 WR: How has your own freeriding style evolved along with your signature Atomic ski? Has technology enabled you to do things you couldn’t when you started out?

CB: Absolutely! There are countless landings, take-offs, butters, lines and jumps that would never have been possible without my ski. I’m not saying other skis won’t accomplish those hurdles but, for my style of skiing and my evolution as a skier, being on Atomics has got me to where I am today.

The ski has expanded my horizons and pushed me past what I thought possible. Not to mention the skiers by my side (Eric Pollard and Pep Fujas) pushing their limits, and my teammates like Sage and Tim showing me what else is possible on my pro model. All those examples, plus technology, has progressed backcountry riding.

WR: Which ski technology advance in recent years has made the most difference to what’s possible on skis – not just for pros, but for the rest of us?

CB: The twin-tip was a big one, but the rocker for sure. It has made powder skiing attainable for so many different levels of skiers. And allowed us to do so much more in so many different types of snow packs. It’s incredible. We should be thankful for minds like Shane McConkey and Eric Pollard. Those guys were at the forefront of powder ski technology.

WR: When did you realise you wanted to freeride and not downhill race? What was the attraction? Is the appeal of the park still strong?

CB: I realised it when the terrain park was built at Mammoth. I grew up with so many amazing snowboarders, my brother included, who I looked up to. I wanted to do what they were doing.

Luckily the parks came at a time when ski technology was rapidly changing, from the minds of JP Auclair and all those boys responsible for the twin-tip. I saw it was possible to do what my boarder friends were doing, using a tool I’d spent my childhood trying to master.

Today, I’d be lying if I didn’t say my park days are fading. Not because I don’t love them, but that much impact day after day, year after year, starts to take a toll on the body. And I want to do this sport for as long as possible! I love riding park on the softer days, especially in springtime.

WR: Which riders, famous figures or adventurers most inspire you and why?

CB: Oh man. So many. For so many reasons… Surfers Craig Anderson and Rob Machado for style, ease, fluidity, vision. Dane Reynolds for the same reasons as Craig, plus his pure raw talent. Snowboarders: Nicolas Muller for his vision, talent, flow, style, pop. John Jackson because I grew up looking up to him, his skill level, style, and raw talent. And Matt Hammer for style.

In the skiers it’s Eric Pollard for his vision, talent, style, art, movie-making and his fathering skills. Pep Fujas for talent, style, skill, and his ability to adapt to any style of skier or situation. Candide Thovex for skill, style and raw talent and JP Auclair for his wisdom. In the climbers it’s Lonnie Kauk for his mental strength, physical strength, and his thought process. This list could go on…

So many people have played instrumental roles in my life, whether teaching me, pushing me or supporting me. I’m thankful for everyone who has inspired me.

WR: Which film production companies and athletes are you working with this winter? Can we expect something special?

CB: Yes. Nimbus Independent. Eric Pollard, Pep Fujas and I are the main characters, with many friends along the way. It’s a two-year project coming out in the fall of 2015 and titled After the Sky Falls, with a coffee-table book as well. There are a few web series to coincide with the main production: one’s a GoPro series dropping this fall and next. Secondly, I did a trip with Sweetgrass Productions to Alaska for a unique segment that I’m not allowed to disclose. It was unlike anything I’ve done and will drop this fall. Keep an eye out for it.

WR: What freeride terrain excites you most and which mountain or range has taken you closest to the ‘perfect’ ride?

CB: Spine lines in Alaska, but I’m still searching for those epic conditions. I haven’t been as lucky as others so I’m continuing the hunt and getting a huge lesson in patience. British Columbia backcountry has given me my most memorable days. 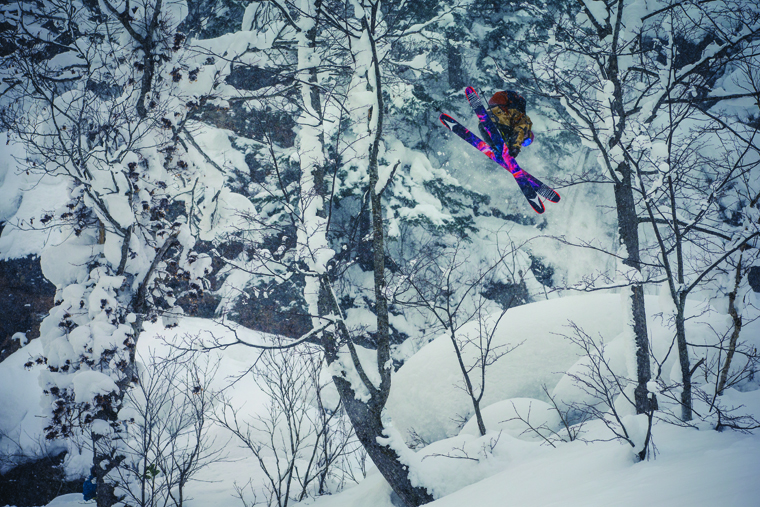 WR: Eric Pollard was guest editor of Fall-Line last year and you’ve done great projects with him. What can you learn from Eric and fellow Atomic rider Sage Cattabriga-Alosa?

CB: Eric has played a massive role in my evolution as a skier, through his vision, his films, his art. We are like-minded and often discuss our visions. We are close friends so I think even subconsciously he inspires me. He has amazing skill sets in a lot of the same fields as me, so it’s impossible not to share ideals and inspirations. His mind is non-stop. He has 20 different visions and they all blow me away.

Sage is awesome too. I’m forever grateful to him for telling me about a computer program and tablet, which is now how I create my graphics. His skiing is insane – line choice and flow are very much parallel to how I like to ski.

WR: You’re at the top of your game. Was there a moment when things came together? Or is it about talent, hard work and commitment? What advice can you give others looking to make a living from freeriding?

CB: I’m thankful for so many things. People, sponsors, filmmakers, photographers – everything plays a role. There is hard work, hurdles and everything in between – it’s also a question of learning from every situation, having a good attitude and being grateful for opportunities. If it was down to one formula and raw talent there would be a plethora of pro skiers. It takes a million pieces alongside your work ethic to make a career happen. I’m just thankful I noticed the pieces and was able to harness them.