When you’re riding first lifts with the likes of Jérémie Heitz, Sam Anthamatten and Candide Thovex, you know you’re in for a good day

When you’re riding the first lift up and the only other people in the cable car are Jérémie Heitz, Sam Anthamatten and Candide Thovex, you know you’re in the right place. Or make that ‘right place, right time’. We’re in the wild and woolly Lötschental, a region of southwest Switzerland that shares little with Zermatt and Verbier, despite being on the same page of the atlas. And it has just snowed about a metre.

The valley’s resort, Lauchernalp, is a development on the one-big-lift theme – cable car, chairlift and then gondola run in a straight line up the hillside from the 1400m valley floor to drop you on the ridge-top at over 3000m, wondering where to go next. On the basis that the Dream Team probably knows what they’re doing, we keep right on their heels so they can take us to the best stuff: through the cabin doors and out of the lift station, it’s all going well. Then they vanish, evaporating at the click of a ski binding. Probably for the best, judging by the speed they’re going when we next see them, faint dots in the distance; and they spend most of their days upside down, while their route choices are quite frankly extraordinary.

Besides, we’re with mountain guide Nick Parks, for whom the valley – just an hour from his home in Zinal – is a favourite mid-winter haunt, as it gets weather arriving from the north, which frequently blankets much of this region with snow. From the top we can see what it’s all about: abroad flank of mountainside that stretches uninterrupted from the Jungfrau in the east to the Balmhorn in the west. As you might hope, it’s possible to fan out left or right from the top lift, to find multiple lines, some taking you a long way either up or down-valley for a bus back to base.

For today, there’s so much snow we’ve got our work cut out just exploring within the domain. For a warm up, the snaking piste that heads back down the line of the lift looks to have been built for cutting corners: drop off the side for a pitch of powder, cross it lower down and repeat, several times over. We’re not the first in, but there’s plenty for everyone, and it’s mostly steep enough; this is one of those days where you won’t get far on the flatter stuff.

Back up top, we head west off the first bend of that same piste for a brief boot-up. Just a few minutes of sweat takes us into a whole world of fun below the Kleinhockenhorn, into the Schreja valley, down to the Hockenalp, then the forest and back to base station – about 1600m of vertical right there. For a final fling we head just east of the domain, taking the line of the Milibach river valley, which yields similar big results. Our route would take us easily back to mid-station, but at the end of the day the obvious thing is to ski roughly the line of the piste and summer track to valley floor, which yields plenty of tree-skiing shortcuts, passing mountain hamlets and lone chalets in the woods designed by the Brothers Grimm.

For day two we’re back to the top to traverse the length of the ridge westwards, heading to the hut on the Lotschberg pass before a long descent to the valley floor. Someone has forgotten to switch the sun on this morning, and they’ve left the door open – it’s windy enough that half the snow has blown away while the rest has changed consistency, not in a good way.

To our right is a big drop north into the Gasteretal, while the east face pyramid of the Balmhorn dominates the view ahead. Nick tells us the late Remy Lecluse – steeps specialist from Chamonix – once skied it, though we all agree a wing-suit might be a more appropriate choice of equipment. Put it this way: you’d definitely need the right snow conditions, as well as a bit of practice.

We settle for the gulley through the Stierstutz down from the hut: altogether less stressful, though a reminder of how hard it can be just to stay upright when the light’s as flat as it is today. But with a descent of this scale, nothing can takeaway from the ambience and as we drop lower, finally into multiple forest pitches, we get soft snow once more. Everything’s right with the world in general, and the farming village of Ferden in particular (our goal for the day), smelling nicely of cow manure and with ancient cobbled streets strewn with straw.

Our next stop is Bellwald above the main Rhône River valley, just 30km in a straight line (60 by road) from Lauchernalp, and every bit as Swiss-mountainy. It’s another classic adventure spot masquerading as a little family resort full of old log chalets and winding, car-free lanes. Today we’re following local guide Reinhard Bittel. We know the drill for the first bit: ride lifts until they run out, but this time, put your skins on and keep going up. After a couple of hundred vertical metres, there’s a route back into domain; keep going a little longer and a descent to the east opens up; further still and you reach options for higher lines east to pick up the massive Bieligertal. But today we’re climbing north to a ridge, punctuated with peaks, to ski down the far side to the west.

We get to the Täschehorn within a couple of hours of the lift top, from where we can see our way straight down the ‘Steinigi Chumma’. My limited Swiss German tells me the name means ‘stony something-or-other’ and though that’s what it looks like on the map – a ramp through the very cliffy flank of mountain to the east of the Fiesch glacier, 1000 metres below – today it’s ‘Snowy Chumma’.

We start with northwest-facing steep powder into a beautiful high bowl, dominated by the huge rock wall running from the 3000m Setzehorn immediately to the north. At this point, the lack of other skiers is puzzling – the climb up wasn’t hard, the descent is clearly one of the greats and the snow is amazing. But after a second and then a third bowl, you get a distinct sense, still high above the glacier, that if you keep going on this line you’ll soon be falling the last 500m onto it, rather than skiing. So bear left at the key point if you know what’s good for you.

Reinhard has it nailed, of course, but still, you don’t need to be the nervous type to get that route-finding is pretty critical around here. In fact, right until we reach the glacier, every turn is key and timing’s a bit of an issue too, with the day warming and these steep lower slopes shedding snow in runnels and sloughs; there’s even a bit of potentially time-consuming gardening involved, through brushy green alder, a sort of venus fly trap for skiers.

The glacier itself is tame by comparison, as we drop onto it right at its end; the interesting bit is uphill in the other direction for a multi-day trip into the heart of the Bernese Oberland, which we’ll have to leave for another time. But we don’t hang about – the valley here is steep and narrow with the obvious potential for rock, ice, and maybe the odd skier, to come pinging down on you. We’re soon above river, hemmed in by steep rock walls, following a rollercoaster path past a small hydro installation at the narrowest part of the gorge.

We emerge near a ridiculously long suspension footbridge, called, so Reinhard tells us, the ‘Aspi Titter’, though at 120m above the ground, it’s no laughing matter. Nor is he joking when he tells us that he built it. Quietly impressive, both Reinhard and his bridge.

Now that we’re off the serious bit of the hill, his stories start to come out: he remembers coming here as a child, when the ice of the glacier snout was metres above our heads at this very point. He’s good on geology, the mini ice-age and has unlikely stories of farming on some of the slopes we’ve just skied. When he casually drops the bombshell that he’s also a snowboarder we barely blink.

In any case, we’re having to concentrate once more, picking our way through the bouldery avalanche debriswithout which this kind of trip just wouldn’t be proper.

Just as I’m mentally preparing myself for a long walk-out to justify our day, Reinhard gives a final flourish… his car. He’s nothing if not a class act.

Book Nick Parks for your Lötschental backcountry adventure.
Hotel Breithorn has doubles from CHF170 per night, B&B. For more details on Lötschental visit the site.
In Bellwald, you can contact Reinhard Bittel +41 79 22 111 39; bergespuer.ch.
Hotel Bellwald has doubles from CHF170per night, B&B.
Guiding rates in Switzerland start from around CHF600 per day for two people. Bellwald.ch 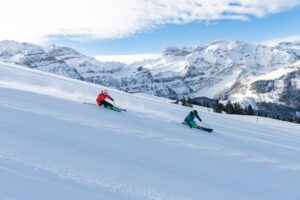 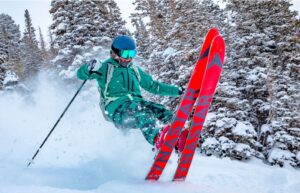 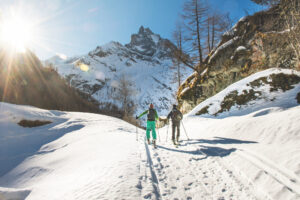