A surplus of snow left over from a good winter – which saw 9m snow totals of Canada’s best – has meant that Banff’s Sunshine Village has reopened for some mid-summer skiing. Open for a week between 28 June and 3 July, skiing and riding is back on, all in celebration of Canada Day (1 July).

After fresh snowfall mid-June, the ski area put out the idea of opening for Canada Day. Within a day the plan was hatched, inspired perhaps by Vancouver Island’s Mt Washington which opened for a weekend in early June (the first time in a decade).

“With all the snow still high in the Rockies, we asked ourselves, ‘What’s a resort to do?’ And we answered LET’S OPEN FOR SUMMER SKIING & SNOWBOARDING!” joked Kendra Scurfield, a spokesperson for Banff Resort.

Skiing is strictly confined to the groomed runs at Sunshine: “Opening for summer requires a magnanimous snow base, which we were fortunate enough to have this past winter. As summer skiing is a novelty, we are reminding all guests that the environmental integrity of our resort is paramount.”

On the west coast of Canada, Blackcomb Glacier lifts are running for the first time in three years. However the area is only open to private training camps and is closed to the general snowsporting public.

Where else in North America is open for skiing and snowboarding?

Timberline on Mt Hood volcano in Oregon has the longest season in North America usually running for 10 months of the year. This includes summer skiing on the Palmer Glacier between June and September.

Timberline also has the greatest inbounds vertical in the United States – 1,384m (summer drop is about 800m).

But head up beyond the boundaries and there’s a whole world on Mt Hood’s higher reaches (top elevation is 3,427m). Following a wet spring, local skier and photographer Alex Zimmerman found this paradise on the summer solstice.

Everything you need to know about skiing the Canadian Rockies 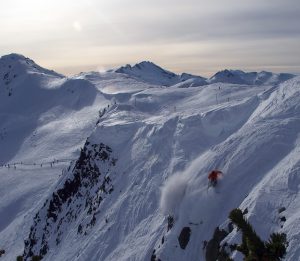 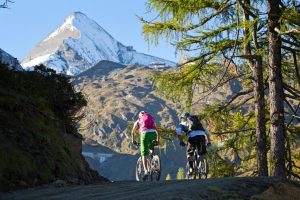