In our series ‘incredible ski photos and how they were captured’ we look at ski photographer Matteo Agreiter’s image of a skier on the edge of a precipice in Vallon, the Dolomites.

“I definitely feel happiness when I see this picture,” says skier Sam Anthamatten. “It wasn’t a line we had planned to do – as part of a Faction filming trip alongside fellow pros Simon Charriere and Yann Rausis – it was just walking further into the valley that we looked and thought… maybe.”

And according to photographer Matteo Agreiter, the exposure to skier’s right (“absolute nothingness, just a precipice”) was only part of the challenge. “The line itself is pretty steep, it could be around 60°” says the Italian. “But that’s not the only problem, because out of shot it gets pretty narrow as well, with the exit so tight you don’t even have enough room to turn the skis to brake.”

Fortunately, few combine steeps and speed with the elan of Sam, who’s starred in this section on plenty of occasions over the last decade thanks to those skills. (For further evidence, see him and Jeremie Heitz travelling the globe for the La Liste series, skiing incredible faces, incredibly fast.)

Anyway, his initial 50/50 ‘maybe’ assessment soon turned to definitely possible, when he was able to check the conditions close-up. “During the climb (which took about 50 minutes, following an initial two-hour skin) I could see how the snow was,” says the Swiss skier who’s sponsored by The North Face, Swatch, Julbo (and obviously Faction).

“I knew then it was skiable, and in a good way. In my mind it became more like 70% comfortable and 30% no fall zone. Clearly that still means danger, with no room for a mistake at certain points, but I felt on top of my game physically, and mentally in a really good flow. Days when you feel like that, things are so much easier… And I was able to take the decision to ski it a whole lot faster than I had originally planned.”

With no nerves to shake-off or superstitions to carry out – “I don’t believe in that stuff” says Sam, who simply slots in his gumshield to mark go-time – the action was  over in under a minute.

Matteo, whose father is a mountain guide, and knows the area well due to his family running a nearby hut every summer, could only doff his beanie, and grab one of the standout images of recent years. “I never imagined this could be skied” says the 21-year-old from Corvara in South Tyrol. “When you see this line, carved into the rock – you would never think it was possible.”

The most incredible ski photos and how they were captured. This image was shot by Sam Anthamatten for Faction’s Roots series 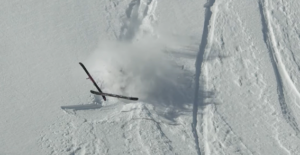 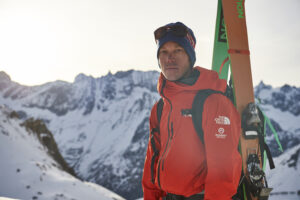 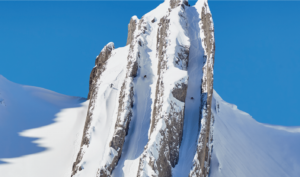