With the Arpitetta valley on his doorstep, Eric Kendall is one lucky man. Especially as he gets to bypass the resort merry-go-round and make the long climb to the Arpitettaz hut…

After moving to Zinal 12 years ago it’s taking a while to work round the valley, exploring all corners. But we keep trying. The ‘problem’ is that there’s a lot of it – plenty of trips that start from each of the four main resorts, and also bigger missions that head into adjacent valleys. And then on a good day, it’s hard to resist easy pickings from lift tops, especially when we’ve got to get back to cook dinner for a chalet-full. (Since Penny and I restored our chalet, we’ve been welcoming groups of guided skiers each winter.)

There’s a very special route that took us a while to get around to, but which has now become a pilgrimage, bypassing the resort merry-go-round and making the long climb to the Arpitettaz hut at the head of the Arpitetta valley. Long before you get there, I’m reminded why I’m making the effort: this valley is one of the most spectacular I know, ringed by massive peaks and glaciers, more Himalayan in scale than Alpine.

We’ve learnt to make an early start. The route is steep-sided and if you’re going out-and-back rather than staying overnight, you should be aiming to return before the warmest part of the day. With over 1000m of climbing, you can count on several hours up, before a picnic, followed by a wonderful ski descent.

The first couple of kilometres from the end of the village follows the Navisence river along flood plain – skinning so flat I always wonder if I shouldn’t skate it. The view south to the distinctive twin peaked Besso (3668m) is framed by a classic U-shaped glacial valley which – if it isn’t – should be in a geography textbook, and is only spoiled by the new double bridge spanning the river at the end of the plain. From there on it all gets a bit steep, though very straightforward, up a jeep track to the west of the river gorge, climbing past impressive ice falls.

We’re properly warmed up by the time the going eases at the upper bridge – another eyesore in an otherwise stunning spot – across the Navisence. Even if you started in the dark the route finding is easy to this point, but once over the bridge it gets slightly tricky: your objective is signed as a walking route, which we often follow in the summer but doesn’t work on skis. Instead, head into forest to the right of the signed way and hack through not-too-tight trees and mixed terrain, followed by an awkward steeper bit.

The way beyond climbs to the right of the Torrent de l’Arpitteta, before emerging above the treeline to pass through a narrow mini-gorge; I like to stick to high ground just to the right (to avoid things falling on our heads) to continue up-valley. Looming at the head is the Weisshorn, the fifth highest peak in the Alps, at 4506m.

The final section is just up up up, much of it steep, and by now high enough and with sufficient vertical already bagged to make my legs drag. My excuse for taking it easy up this section is that I’m checking out lines of descent; the straightforward option is to ski down roughly the route we’ve climbed, but the terrain is such (big, basically) that you have choices and can find your own line even if others beat us to the hut, which can happen, though you’re more likely to see furry wildlife than skiers.

Of course, you don’t have to go down: take glacier gear, and food for an overnight (the hut is open for self-catering visitors) and get an early start up the glacier to the dome of the Blanc de Moming at 3649m, for a massive and serious glacier descent whose steep north-facing slopes pretty much guarantee powder.

Even ‘just’ descending from the hut the way we came is pretty good. Pushing out to the lefthand side of the valley there are wide bowls to begin with and plenty of variation in aspect so we can play with our line to find the best snow. Staying too far left takes you through a rocky section just below the foot of glacial ice; with the right snow it can be fine but ideally it’s something I want to have scoped from below, on the way up.

By about the 2300m contour we’re into light brush and trees with repeated playful pitches, before dropping back to our up-track near the stream, to hack back down to the upper bridge. From here it’s track back to the flood plain – other than a short uphill, it’s pure terror (very short swings, or a solid racing snowplough), sometimes rutted and with the occasional snow-shoer to dodge, before a glide and skate back to base.

Battle of the ski resorts: Zinal 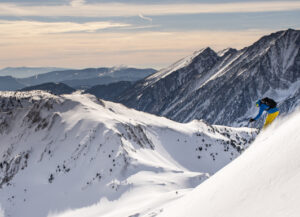 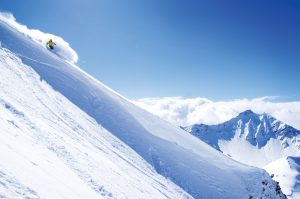 LESS IS MORE – LIGHTWEIGHT SKI TOURING KIT IN THE SPOTLIGHT 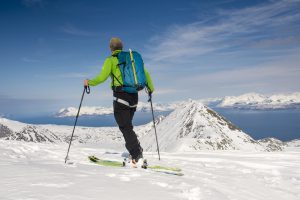 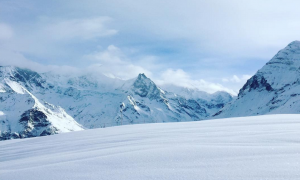