Things have changed a lot over the past 10 years. Once it was a novelty for a new chalet or hotel opening in a ski resort to claim environment-friendly credentials; these days it’s more unusual for a new build not to have at least some ‘green’ elements in its design.

Of course, building regulations, particularly in ski resorts, are ever more stringent, and the more environment-friendly projects tend to be more favourably regarded, so that helps this trend. As does the fact that ongoing advances in green energy systems and hi-tech insulation mean that once built, operating costs of greener buildings are normally much lower.

The result is that ski resorts are at the forefront of the ‘green building revolution’ (if it can be claimed one really exists). While sunshine resort destinations don’t seem to think too much about insulation to keep buildings efficiently cool in the summer heat, and instead spend on energy-wasting air con systems, it’s all about balancing the books in the mountains – designing buildings so energy efficient they don’t need much green energy to stay warm and bright.

Most of the new breed of green buildings are the beloved projects of individuals who believe in the fight against climate change. These can vary from a property like the Ecogite Esprit du Soleil – a high-value, British-owned and run environmentally-friendly bed and breakfast in three modern buildings, two made using straw bale construction, which generate more power than they consume located five minutes from the Swiss resort of Anzère (or 20 minutes from Crans-Montana) – to more ‘luxe’ properties. These include the Marmotte Mountain Eco Lodge in Chamonix, built with green technology and fully energy-self-sufficient thanks to advanced renewable energy systems.

There are, however, the first signs of bigger players moving in to the green ski accommodation market. One German group, for example, Explorer Hotels, has expanded rapidly, building six passive-energy hotels in Austrian and German ski resorts (including Montafon, St Johann in Tirol, Zillertal and Oberstdorf), in just a few years, with a seventh due to open at Hinterstoder.

Passive energy properties are so well insulated they don’t need a separate heating or air conditioning system, and Explorer claim to be unique in the hotel industry, needing 70% less overall energy to operate than hotels of comparable size (85% less heating energy), and source up to 60% of the energy they do need from photovoltaic systems. They’re also relatively cheap to stay in, from under €40 a room per night, so it’s quite the win-win.

When you think about it, mountain huts are in many ways natural candidates when it comes to green buildings. To start with it’s hard to get mains services to them, then they’re up at altitudes where solar systems work more efficiently and, of course, the more energy efficient the building the easier it is to heat. 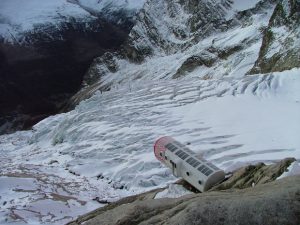 Nearly a decade ago Zermatt’s multi-award-winning Monte Rosa Mountain Refuge led the way, with a building capable of sleeping 120 but getting 90% of the power it needs from the sun. Subsequently other next-generation mountain huts have appeared, being entirely, or almost entirely, green energy powered, including the Bivouac Gervasutti, a 100% energy self-sufficient pod style hut 2835m up in the Aosta Valley.

New this winter is the Refuge du Lou by the picturesque Lac du Lou in the Belleville valley, the culmination of a €1.2m project. The part solar-powered 30-bed refuge, with numerous eco-features, will be accessible skiing off-piste from La Masse (Les Menuires) or Cime de Caron (Val Thorens).

As with so many buildings in the mountains these days, we have happily reached the stage where it seems odd, almost morally wrong, to create a new building without ensuring that it is completely (or almost) environmentally friendly from construction to operation. And that is a very good thing.

La Grave: the history of the wildest ski area on the planet