It’s no longer a secret, but La Grave can still lay claim to the wildest lift-accessed skiing on the planet. Yolanda Carslaw explores how this most raw ski area evolved – with the aid of retro Fall-Line memorabilia!

Soon after Pelle Lang and Les Harlow opened Skiers’ Lodge at Hotel La Chaumine in Ventelon, a hamlet 3km from La Grave in 1989, they wrote an article for Fall-Line, which, then as now, catered for adventurous types. Headed ‘The best kept secret in the Alps!’, it was purportedly by Gary Gibson – but had actually been written by Pelle and Les. Here are some extracts:

“As you ride up the lift under the glaciated peaks of La Meije, you notice the enormity of the ski area below you and the lack of skiers. Here there are no groomed pistes that are measured in kilometres or numerous interlinking lifts. This place is about skiing vertical and as much untracked snow as possible… Often you can ski all day with no one else in sight. Five runs in a day is what a fit, accomplished skier can expect to manage, and it has been known for novices to cry their way down…

“Until recently, La Grave has been just a rumour to most skiers. But when Pelle Lang bought the Hotel Chaumine, more interest was taken in the area. This small hotel has been bringing in guests from all corners of the world. Many are slightly ageing ski bums that have seen, heard and experienced almost everything. The common factor between them being their passion for skiing as here it is not what you do, how you look or what equipment you use, but your ability as a skier and your behaviour on the mountain…

“La Grave is the kind of place a lot of people come to ski for a day or two. If you spend a week here you get to be on first name terms with the other skiers and lift personnel, after two weeks you are invited to homes to eat, and after three weeks you are considered a local. 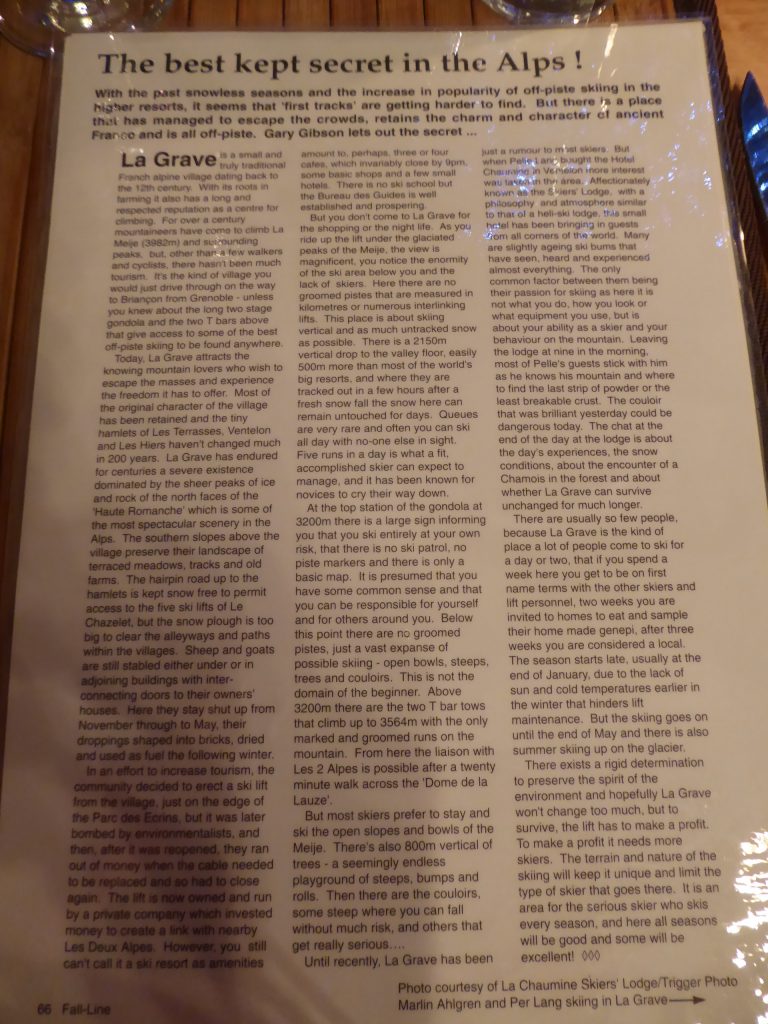 “There exists a rigid determination to preserve the spirit of the environment and hopefully La Grave won’t change too much, but to survive, the lift has to make a profit. To make a profit it needs more skiers. The terrain and nature of the skiing will keep it unique and limit the type of skier that goes there. It is an area for the serious skier who skis every season.”

A timeline of how La Grave evolved

SATA and the latest chapter in La Grave’s story

Earlier in the year we reported that SATA, the company that runs the nearby resort Alpe d’Huez, took over operation of the Telepherique des Glaciers de la Meije on 15 June 2017. The 30 year contract the signed stipulates that SATA must preserve the area’s sporty, wild and natural character, which pleased fans, though some aspects of the agreement were more controversial.

La Grave ski bum, Olivier de Souza, lives in a beat-up van in the parking lot at the base of La Meije. In this show he explains how he got there, what keeps him there, and why he has no plans to leave anytime soon.

Under the contract SATA must investigate building a third gondola to 3600m to replace the t-bar, with the aim that it would be used by pedestrians in summer too: the contract emphasises the need to attract more summer visitors. This would require external funding of at least 3.5 million euros, but could be postponed or abandoned if funding and authorisations aren’t secured. Whatever the case, a budget has been allotted to maintain the existing T-bar and piste until at least 2021.

Some locals are keen on the idea of a third gondola to 3600m, while others fear it would attract a greater volume of unguided skiers over from Les Deux Alpes, who often don’t have the skills and know-how to ski safely in La Grave’s glaciated freeride terrain.