Just being in the mountains makes a hotel pretty cool, but refusing to be your bog-standard lodging –  some ski hotels have taken things to a whole new level of awesome

Below you’ll find the coolest ski hotels we’ve come across – whether for design, facilities or their fascinating backstories, each of these properties lives in a league of its own. 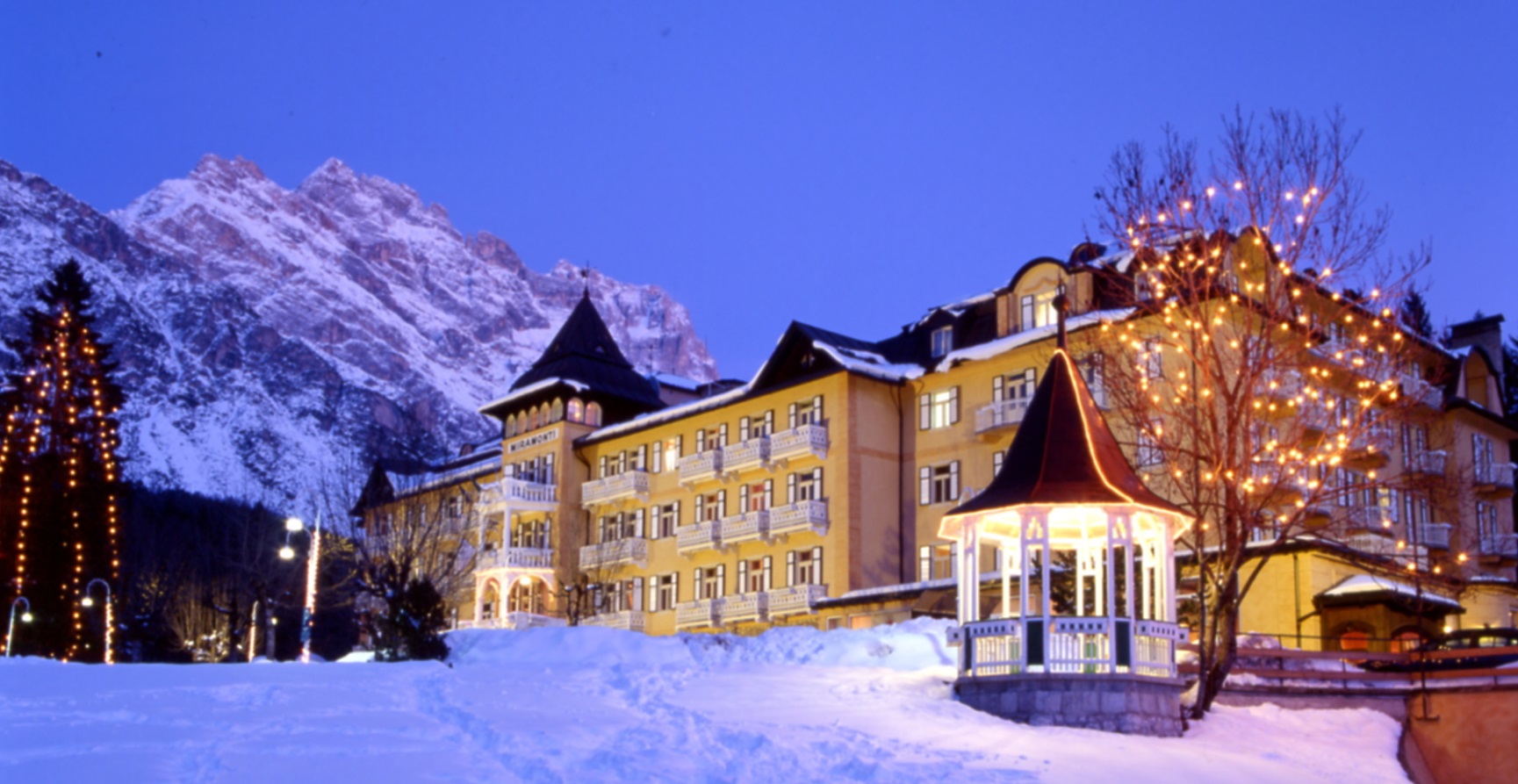 The Miramonti Majestic was built at the start of the 20th century in what could well be the most dramatically scenic spot in the Dolomites. A grand, palatial structure, painted golden yellow with elegant wooden balconies, it attracted international royals, members of the aristocracy and distinguished film directors.

Boasting more than one mention on IMDB, the hotel made its Hollywood debut in the original Pink Panther movie featuring David Niven and Peter Sellers, starred in Elizabeth Taylor’s Ash Wednesday and perhaps most famously appeared as the hotel of James Bond (played by Roger Moore) in For Your Eyes Only.

With the likes of Brigitte Bardot, Sophia Loren, Clark Gable and Ingrid Bergman as past patrons, the hotel holds onto its classic Hollywood glamour quite majestically. 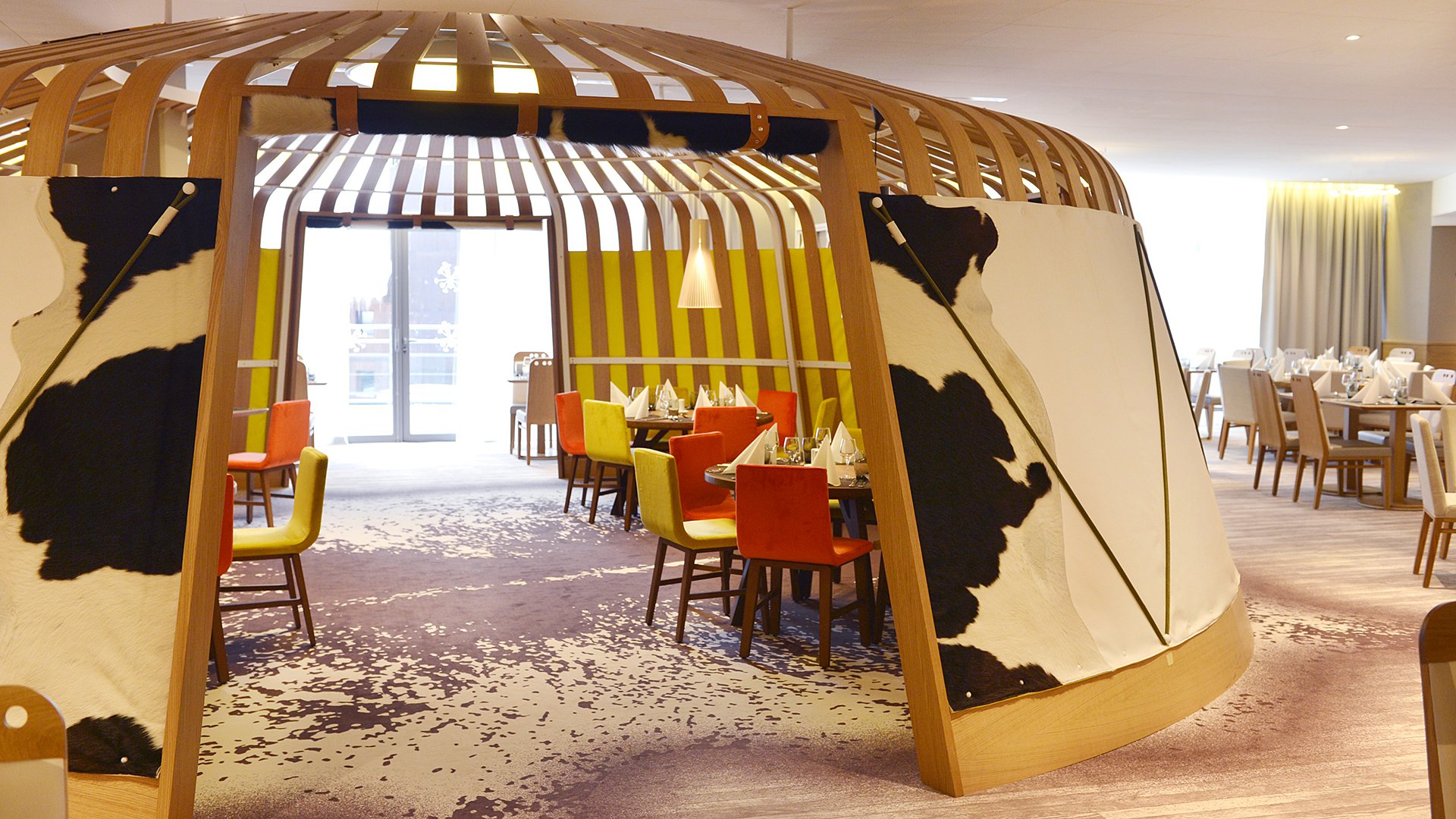 While most hotels have a team of designers, architects and investors taking charge of the main decisions, this one enlisted the help of locals and fans through Facebook. It crowdsourced decisions on everything from the hotel name to the colour palate.

Facebook decided that a 10-metre indoor climbing wall be included in the lobby, there are indoor yurts in the dining area, and guests have beer taps on every floor (with limitless access, as it’s all-inclusive). Paired with the boundless energy of staff, bonkers entertainment and bottomless food and drinks, it’s the kind of place you can unleash your inner child and have the holiday of a lifetime.

The hotel you can ski-in, ski-out and ski-ON: 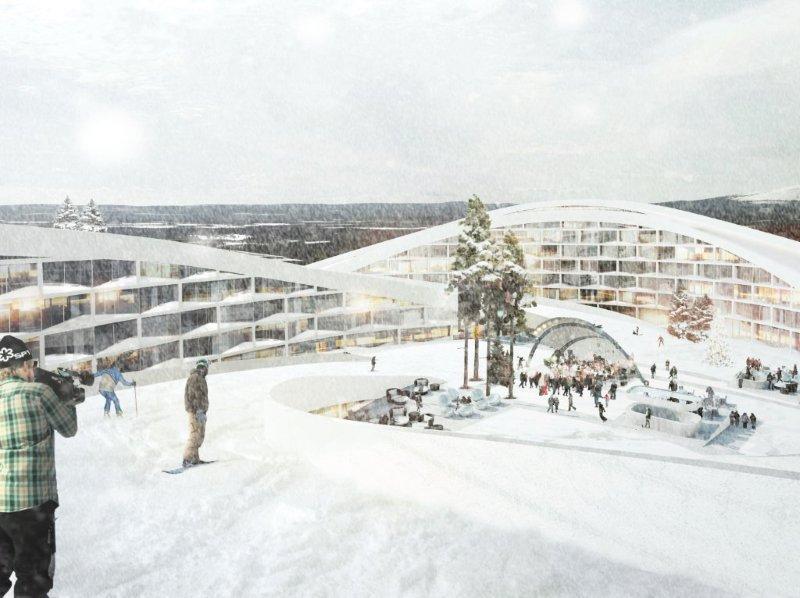 This one hasn’t been built yet, but when it has it’s going to be quite spectacular…

The Koutalaki Ski Village plans to be a crazy luxurious apart-hotel type lodging, consisting of four buildings. There will be lifts serving each of the rooftops, which you’ll be able to ski down, straight into the main ski area.

The whole thing was dreamt up for an architectural competition by the design geniuses at the Bjarke Ingels Group. They wanted to create a structure that blended into the surroundings and made the most of the snowy climate, and the dream looks set to become reality in the next year or so. 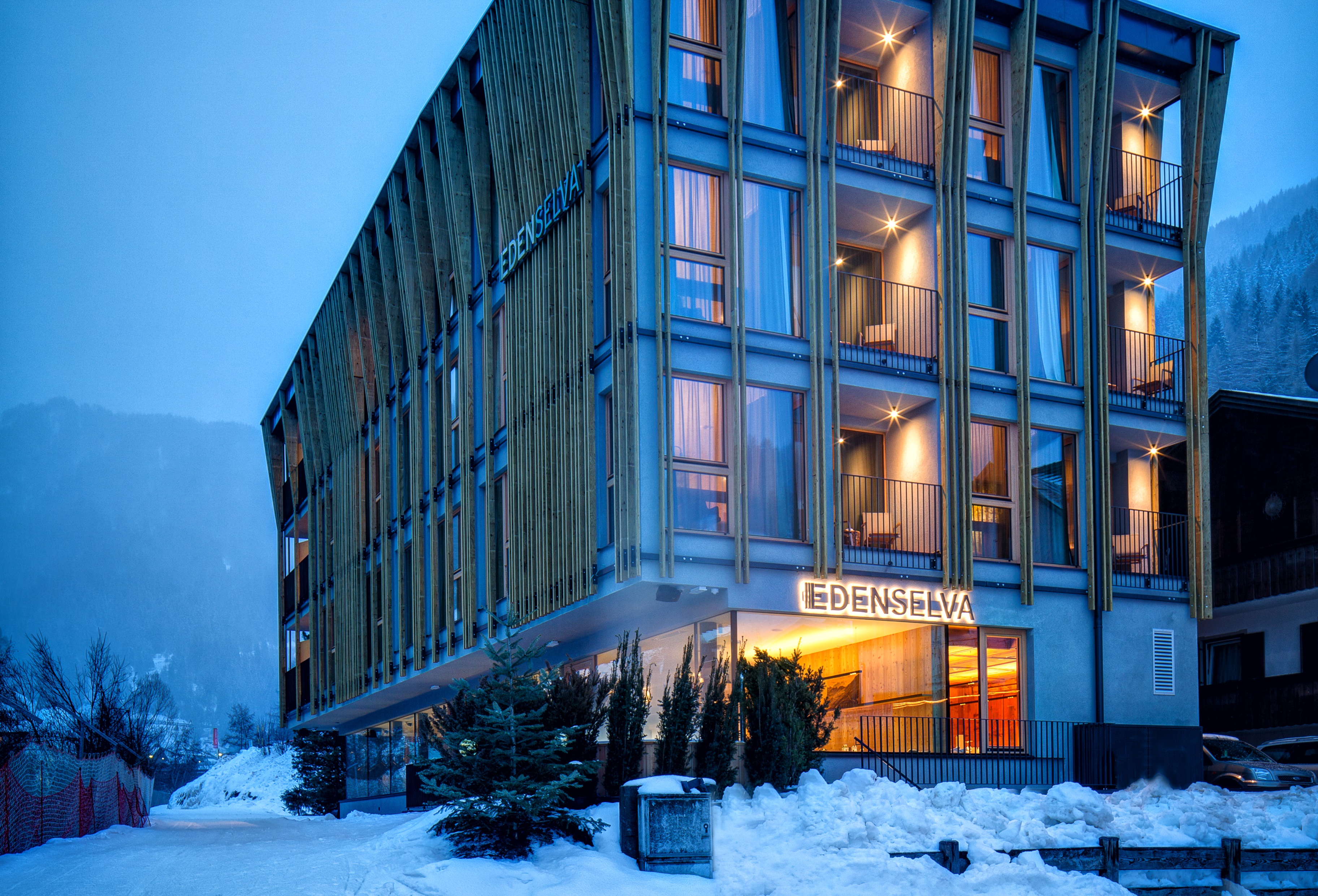 Answering the call for more sustainable tourism in Europe, Hotel EdenSelva recently joined the ranks of hotels in Val Gardena – in the most environmentally friendly way possible. If you want a ski holiday without a big carbon footprint, this is the perfect place to stay.

This pioneering property is built, insulated and furnished using sustainable materials: local wood forms the main structure and glass features a lot, with triple glazing to maximise light and energy retention from the sun. The hotel has a methane generator for minimal CO2 production and energy efficient electricals are fitted throughout. Eden’s restaurant has a ‘farm to table’ focus, making healthy meals with local produce for minimal food miles. Saving guests the temptation of driving, the building is ski in, ski out. Its exterior reiterates the building’s respect for the landscape it sits in, with vertical strips of wood as an homage to the surrounding larch forest.

Skiing in the sky with diamonds:

Koh-I Nor in Val Thorens, France

There are a lot of luxury hotels in the Alps, but this one gives ‘diamond standard hospitality’ a whole new meaning. Called Koh-I Nor after the legendary 105 carat diamond presented to Queen Victoria (also Persian for ‘mountain of light’), everything about this hotel has been designed to embody its name. It’s the highest 5-star hotel in Europe, positioned solitaire-like at the top point of Europe’s loftiest ski resort. Glass features heavily, from the upturned diamond-shaped entrance to the huge picture windows, installed wherever possible to let light flood in. In the day you have peaks as far as the eye can see and come nightfall, the whole place resembles a ‘mountain of light’, sparkling down on its surroundings. The spa’s signature treatment uses semi-precious stones to release your inner sparkle and Michelin-starred chef Eric Samson’s signature dessert features a diamond of chocolate… You might have to pawn a gemstone or two to stay here (we found a luxury package holiday on SNO for upwards of £2,800 a head!) but it’s sure to be a dazzling stay…

The ski hotel that annually vanishes: 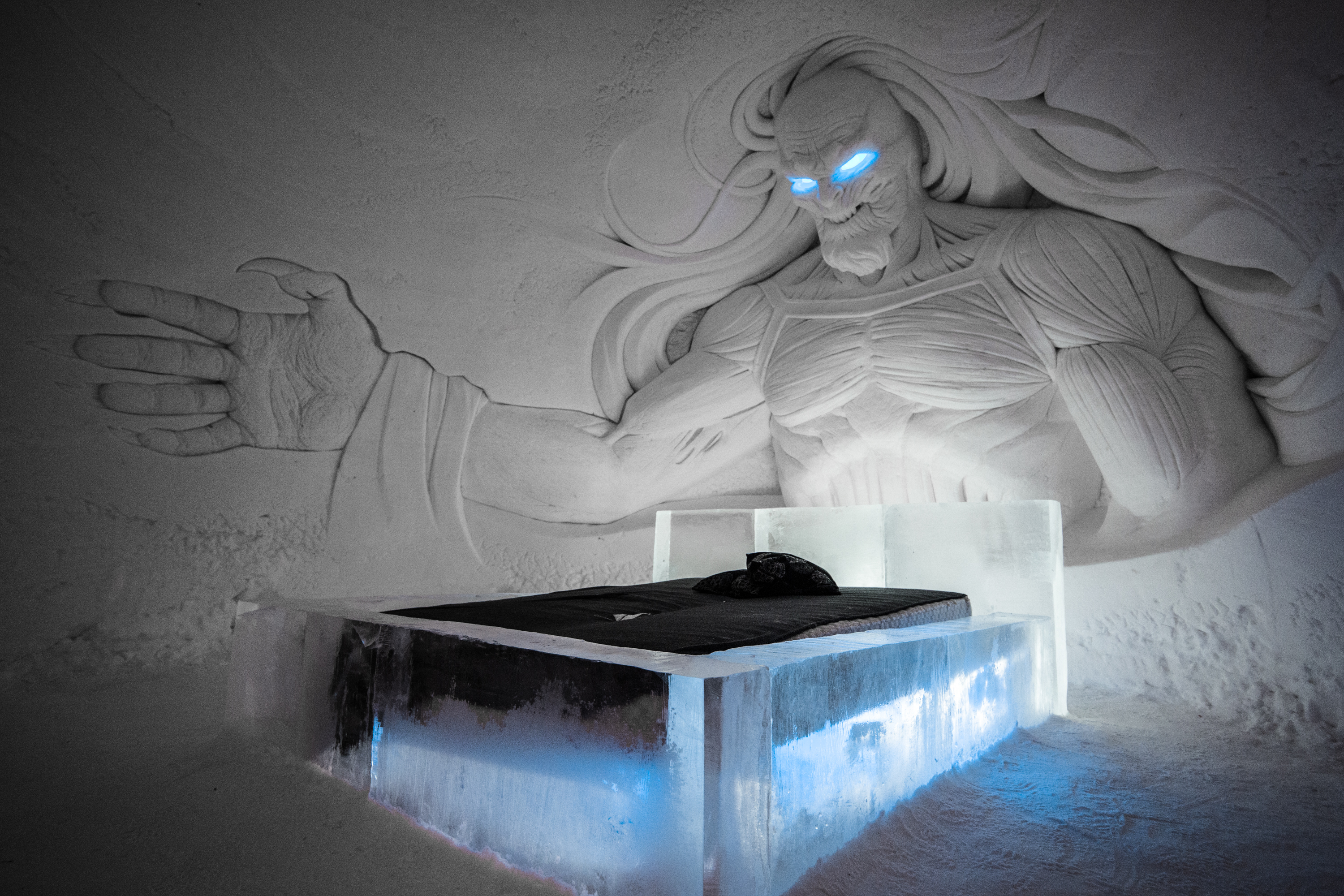 Every autumn, ice and snow experts take something like 350, 000 kilos of ice and 20 million kilos of snow to create the incredible SnowVillage near Yllas. Cosier than it looks and sounds, its Snow Hotel has 30 rooms and suites with fleece-lined sleeping bags for guests to snuggle up in. There’s also an ice restaurant, ice bar and an ice chapel for weddings.

This year the SnowVillage collaborated with HBO to give their icy kingdom a Game of Thrones theme – snow sculptors created an iron throne, Braavosi Hall of Faces and White Walker who peers formidably above one of the beds…

The entire village disappears when it melts in the spring, then when the snow returns in October, building begins all over again. 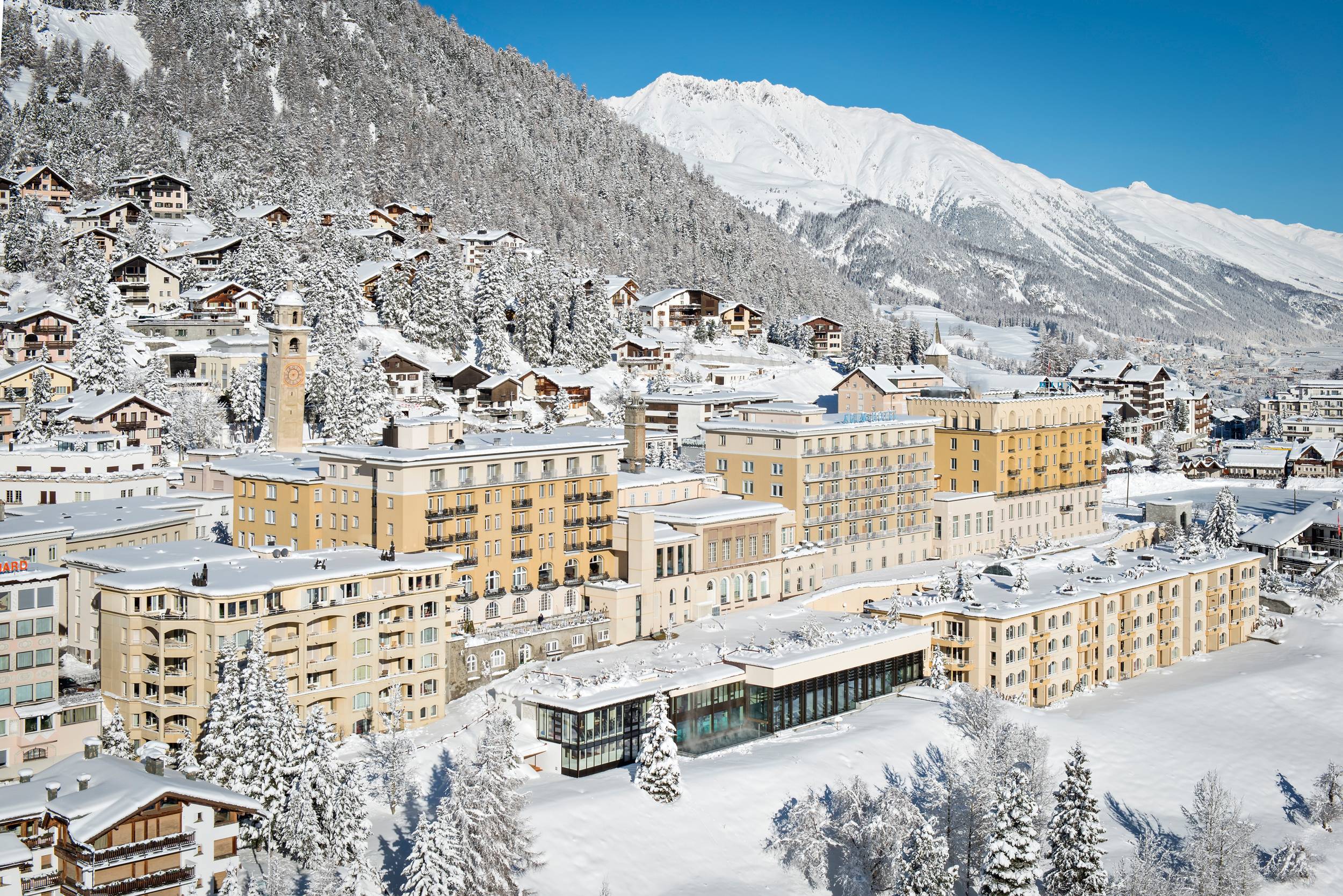 However daring the design or funky the facilities, what it all boils down to is the fact that ski hotels might have never existed if it hadn’t been for the Kulm.

If your idea of an amazing hotel is somewhere steeped in history, it’s worth booking a stay in the father of winter tourism. Back when people only holidayed in the warmer months, the Kulm’s owner, Johannes Badrutt, urged his summer guests to return in December and experience St. Moritz in snow. They had a fabulous time, went home in spring to spread the news and wintering in St. Moritz quickly became a fashionable pursuit for wealthy tourists. Enthralled by the snowy, sunny climate, Kulm guests invented sports like the skeleton bobsled which went onto feature in the Olympic Games (which the Kulm hosted the opening ceremonies for 1928 and 1948). Before long, other Alpine towns opened their doors to winter tourists – the rest is history!