Graham Bell is on a mission – ‘Mission 160’ to be precise. His aim? To be the fastest man on skis. Now all he needs is a very fast Jag and some motorbike leathers. Here’s how Graham goes about breaking records 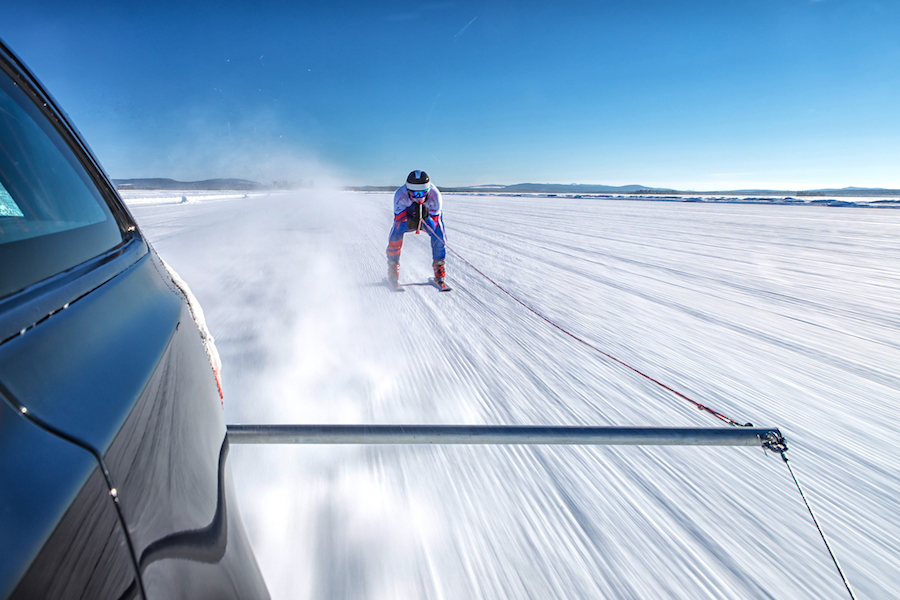 Towed behind a Jaguar XF Sportbrake

Recently, I became a very proud Guinness World Record holder for towed speed skiing, achieving a speed behind a Jaguar XF Sportbrake of 117.48mph. Although my speed smashed the existing world record of 70mph, it falls short of my own personal skiing record of 121mph, set using gravity in 2009, on a speed skiing track in Vars, France. My efforts are a long way short of Italian Ivan Origone’s world speed skiing record of 158.41mph, also set in Vars, in 2016.

I am, however, hooked on world records, and have already started planning a second attempt. The ultimate goal would be to become the fastest man on skis, using thrust to overcome gravity and set a speed over 160mph. I am going to call it ‘Mission 160’, and although I believe it is achievable, it is still very fast indeed.

I am not the first ex-British ski team member to develop a fascination with the possession of a Guinness certificate. In 2013, while recovering from a badly broken leg, Chemmy Alcott set a record for the most beer mats (30) flipped and caught in 30 seconds. Unfortunately, Chemmy’s beer mat record was short-lived, and now it stands at 42 mats flipped and caught, set by Robert Smithson in the Newcastle Crowne Plaza in 2017.

However, Chemmy does still hold a world record for the fastest mile on roller skis by a linked team, in 6 minutes 28 seconds, a quite beatable time in my opinion. Beating an existing record is a good deal easier and takes much less organisation than setting a brand new record, because the rules and criteria have already been set by Guinness.

So, before I go about trying to better my own record, I wondered if there were any existing easier options.

A glance at the Guinness World Record website revealed that the record for switch skiing sits an impressive 81.54mph, set by Elias Ambühl in Arosa last season. Ambühl competed in the Olympic ski slopestyle in Sochi and is a triple X-Games medallist, and

I can say quite categorically that I will not be challenging his world record. However I did spot a piece of low hanging fruit; American Erik Roner’s record for towed speed skiing on Tarmac using commercially available snow skis sits at a paltry 32mph! All I would need to do is grab some old skis that Terry Bartlett has lying out the back of his shop in Hillingdon and I would be away. Seriously though, as much as it would be fun watching the sparks fly careering down a disused runway, I think I will stick to snow.

So back to Mission 160, and how to become the fastest man on skis. Firstly, to paraphrase Roy Scheider; we are going to need a bigger track. The mile-long track that Jaguar prepared at their test facility in northern Sweden was the determining factor in my world record attempt. Annoyingly, because Guinness required the 100m timing section to be placed in the middle of the track, the car was still accelerating as we passed the second timing beam. Jaguar have plenty of cars that could easily do over 160mph, the tricky part is doing that speed on ice. Most studded tyres are not rated to speeds over 100mph, but in Sweden there is apparently a place to have custom ice studs fitted to performance tyres that could achieve the magic 160mph.

Drag increases with a square of your speed. This means that an increase in speed from 117mph to 160mph will mean a significant increase in the force that I’ll need to hold through the water ski handle. Skiing directly behind the car is not an option because of the ‘snow smoke’ the wheels kick up. What could work is a faring attached to the rope just ahead of the handle, which would both decrease the total drag, and create a small air pocket for me to shelter behind.

A set of motorcycle leathers with a built-in air bag and a full-face motorcycle helmet, and I’d be good to go with mission 160…

Graham Bell on the curse of the ACL

Why hasn’t Ski Cross taken off in the UK?