Monoskiers and Powder 8-ers of the world rejoice. GRAHAM BELL is on a mission to add some G.N.A.R. back into The Winter Olympic Games with these rad, left field sports

To be accepted onto the Winter Olympic programme, sports must demonstrate worldwide participation and guarantee popularity with TV audiences. It can take decades; freestyle skiing, which started in the 1970s, was accepted in 1992. Telemark skiing has been trying for years, and hopes to be involved by 2022. But what of the winter sports that will never make Olympic standard? Could it be time to organise the first Alternative Winter Olympics?

For starters, we could pick up all the potential Winter Olympic sports that have been rejected along the way. In St Moritz, 1928, ski joring behind horses unsuccessfully demonstrated its Olympic potential, but the sport still survives in St Moritz at the annual White Turf event, and the North American Ski Joring Association have been running events since 1999.

Substitute horses with motorbikes, cars or snowmobiles and you could create a whole new sub-sport. The Alaskan Arctic Man Challenge, which combines a downhill race with an uphill ski joring section behind a snowmobile, is a favourite of ex-US ski team racers Daron Rahlves and Marco Sullivan, and both have won the Arctic Man title.

In Albertville 1992, speed skiing and freestyle ballet were demonstrated as potential Olympic sports; neither were successful. Speed skiing worked in 1992 at the Les Arcs track, where Michaël Prüfer won with a speed of 142mph, but to achieve that speed you need a big mountain and a steep slope. The IOC took the view they could not guarantee that, and were proved right – PyeongChang 2018 and Beijing 2022 have struggled to find a hill big enough for a downhill track, let alone one for speed skiing. Ski ballet’s non-acceptance into the Olympic programme killed the sport, but would certainly be worthy of a spot in the Alternative Olympics.

Just because a sport has been dead for the past two decades does not mean it is beyond resurrection. Monoskiing made a comeback in 2015 when Val d’Isère started hosting the World Championships. The reigning champion is none other than ex-British team downhill racer Finlay Mickel:

“The technique is to imagine you are an ESF instructor in the 1970s, and separate at the hip like a champion. It was a relief to win last year after placing third in 2016; I now consider myself the Jean-Claude Killy of monoskiing!”

“How about combining monoskiing with another dead 1980s discipline: Powder 8s?” The practice of making short, controlled turns in the powder so your teammate can follow you down, skiing the exact opposite line so tracks of 8s are left in the snow, sadly died out with the invention of fat powder skis, but could make a come-back.

One event that will never die, but likewise will never become mainstream, is the infamously dangerous mass-start, top-to-bottom ski race. It became known in America as ‘Chinese downhill’ and gained notoriety in the 1984 Hollywood film Hot Dog The Movie.

Set in California’s Squaw Valley, the film culminates in a race to decide the best skier by way of a Chinese downhill. The plot was like Porky’s on snow, but an incredible £38m at the box office made it the most successful ski film ever. Throughout the 1990s the Australian ski resort of Perisher ran a Chinese downhill called the Dash of Cash, however it proved too dangerous for even the gung-ho Aussies.

In 2003 Squaw Valley skier and film-maker Robb Gaffney wrote Squallywood, which detailed all of the most difficult lines on the mountain. Using the book, the late great Shane McConkey invented the Game of G.N.A.R., which stood for Gaffney’s Numerical Assessment of Radness. In the game, points were awarded for skiing tough lines naked, or stopping to call your mum on an exposed section. If ever there would have been a person to take on the Thomas Bach role at the Alternative Winter Olympics it would have been Shane. 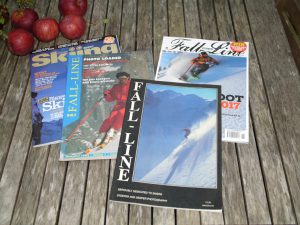 Fancy becoming a World Champion? Just invent your own discipline… 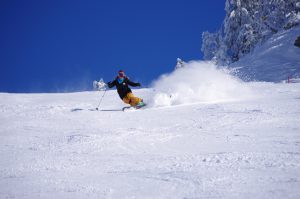 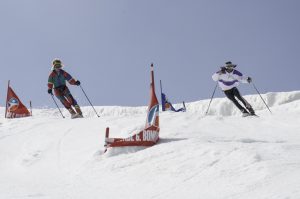