Launching yourself over big-air jumps and high-banked turns at speeds of around 65km/h sounds fun, right? So why isn’t Ski Cross thriving in the UK? Graham Bell investigates

At its debut in Vancouver 2010, Ski Cross posted the highest BBC viewing figures of the Games, at 4.2 million. The sport caught the imagination of the British armchair viewer without any representation from TeamGB, by serving up a  cocktail of close calls, crashes and photo finishes. In a country that historically prides itself at being at the forefront of dangerous pursuits and sports, surely here was a sport that could grow and thrive in the UK?

Four years later at Sochi 2014, and Britain remained unrepresented in Ski Cross. One athlete, Emily Sarsfield, who gained a start spot from the International Olympic Committee, was stopped from competing by the stringent British selection policy. After the Games she argued that had the British selection policy been applied to the French team, then bronze medallist Jonathan Midol would not have competed. 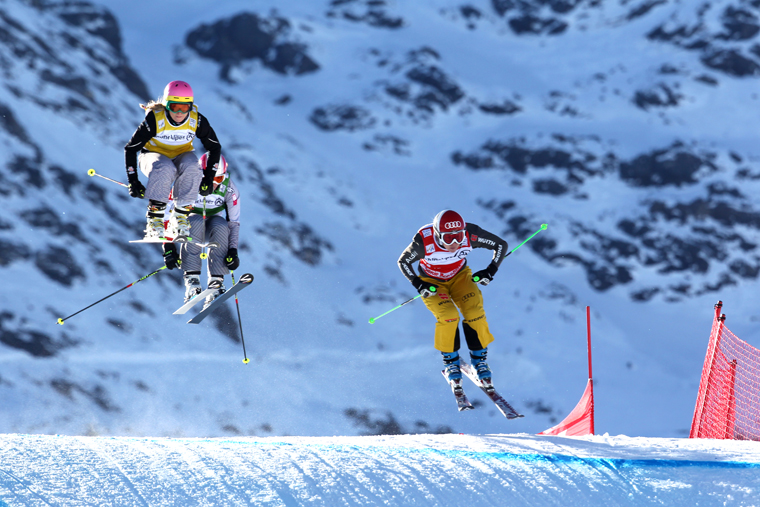 The British Freestyle Ski Cross squad is typically made up of ex-alpine skiers. Ed Drake (29), Pamela Thorburn (29), Liz Stevenson (25) and Emily Sarsfield (32) have all faced a constant battle to stay free from injury in the most dangerous of Olympic sports. Unsurprising really as they have no funding, no team coach, and no team sponsor – and little or no help from the governing body, British Ski & Snowboard (BSS) in terms of physiotherapy or strength and conditioning support.

Internationally the sport has moved on from the early days, when Alpine race stars like Kitzbühel winner Daron Rahlves could switch disciplines after retiring from a ski racing career at 32, to win the X-Games and compete in the 2010 Olympics. Alpine racing is still the foundation of the sport, but now athletes make the move much earlier to Ski Cross, to be picked up by national junior programmes at U18 level.

It would have made much more sense had the International Ski Federation (FIS) made Ski Cross an Alpine discipline when it decided to take control of the sport back in the late 1990s. But in 1997 the FIS general-secretary at the time Gian-Franco Kasper called it a “bastardisation of the sport”. Kasper was elected president of FIS the following year, and come PyeongChang 2018 will have been in charge of the FIS for 20 years.

This sense of not belonging is magnified at British level: Alpine skiing is able to attract some team sponsors, such as Delancey, and snowboard and freestyle are lottery-funded to PyeongChang with £4.89 million – none of which goes to Ski Cross. They should not feel too bad, since Snowboard Cross gets nothing either – despite the efforts of three-time Olympian Zoe Gillings-Brier.

Current British Ski Cross champion Ed Drake puts it bluntly: “The only contact I have with BSS is when I apply for a FIS licence. The Alpine racing clubs don’t want to get involved with Ski Cross and the centres of excellence like the British Ski Academy in Les Houches and Ambition Racing in Tirol are too busy trying to produce Alpine racers.”

In the summer months Ed runs the Ski X Performance Centre (SXPC) at the Snow Centre, Hemel Hempstead, in an effort to get more youngsters involved in the sport, combining this with work as an Alpine coach in order to fund his racing season. The latest thinking at BSS is to hand Ski Cross over to the snowboarders to look after.

Zoe’s coach and husband Dan Brier told me, “Since 2007 we have built the Snowboard Cross team to 14 junior athletes and 14 full-time senior athletes with no funding from BSS, and hope to do the same with Ski Cross. We held a joint training camp in Hintertux and launched the Mitsubishi Motors Ski & Snowboard talent ID Series last summer.”

If one of our current British team makes selection to PyeongChang 2018 it will certainly act as a catalyst for more young skiers to take up the sport. But if we are to seriously challenge in Beijing 2022, we must put a junior programme in place now. BSS at least have an option for FIS-registered British athletes to apply for a secondary licence for a very reasonable £35, so all it needs now is for someone to convince junior racers to have a go at racing a FIS Ski Cross. I know from experience that it’s a lot of fun, and will help develop Alpine racing skills too.  FL