Steep, deep and family friendly in the Southern Alps

A firm French favourite, ‘Serre Che’ (as it’s affectionately known) manages to slip under the radar of many British skiers. It shouldn’t do.  Eighty per cent of the ski area lies above 2,000 metres and yet tree-lined runs are plentiful – a rare combination and a godsend in poor weather. In total there’s 250km of terrain – so if you like clocking up the miles, there’s plenty for you.

The resort is made up of four villages and the vibe is relaxed, unpretentious and very family friendly. Le Monêtier is the smallest, most charming of the main villages, and Villeneuve the liveliest – although you won’t find places to really party hard.

If you’re travelling with first-time skiers, this is a brilliant choice: there are dedicated beginner zones in every sector, while Chantemerle has it’s own special nursery-slope area at Serre Ratier. When you are done with skiing for the day, you can take a dip in thermal spa waters at Les Grande Bains in Monetier.

Daytime rail travel: Depart London St Pancras on the 09:31 Eurostar to Paris-Nord, change to Paris-Lyon and take the 14:41 TGV, arriving at Oulx at 19:21. From there it is a 40-minute taxi ride.

Overnight rail travel: Depart London St Pancras on the 16:31 Eurostar to Paris-Nord, change and take the 21:22 sleeper train from Paris-Austerlitz, arriving at Briancon station at 08:30. From there it’s 15-20 minutes by taxi or bus to the other villages.

Plan your trip to Serre Chevalier at Snowcarbon.co.uk.

The family-friendly resort with a powdery secret…

If you think of La Plagne, does ‘family resort’ spring to mind? So strong is the resort’s appeal to that market, that it’s easy to forget what else the resort is brilliant for; and one of those things, is powder.

Related: top tips to save money when taking the ski train to the Alps

The resort is home to fabulous freeride terrain – arguably some of the best in the world. What’s more, because such a high proportion of the clientele are families sticking to the piste, snowfields remain untracked longer than you might expect.

La Plagne. The family resort with a powdery secret | Royer

There’s epic off-piste off the black runs descending the 3,250m Glacier de Bellecotte, while those into Les Bauches have a vertical descent of over 1,400m. The North Face of the Bellecôte provides challenging chutes and you’ll end up high-fiving in Peisey-Nancroix after a after a 2,000m vertical drop. Montchavin is another area to explore too, with its myriad of tree-lined runs – and plentiful opportunities to weave powder trails between them.

The resort is actually made of eleven separate villages, giving a wide choice of accommodation and style, from traditional Savoyard villages like Montchavin to more purpose built but über-convenient Belle Plagne.

Overnight rail travel: Depart London St Pancras on the 19:45 Eurostar Ski Train, arriving at Aime la Plagne at 05:57. From there it’s 55 minutes by bus or taxi.

Plan your trip to La Plagne at Snowcarbon.co.uk

A lofty, increasingly upmarket ski-in-ski-out base

Boasting Europe’s highest village, at a lofty 2,300m Val Thorens has skiing that reaches up to 3,230m and a season that kicks off in November and runs through to May. When the sun is shining, Val Thorens is a stunning location, with a cirque of six glaciers around it. You can chase runs all the way through the 600km Three Valleys ski domain to treelined Meribel and Courchevel, particularly good options if the clouds close in.

Val Thorens offers skiing from November to May| Val Thorens

Some of the best snow is off the 3,130m Pointe de Thorens, but check out the quieter sector around Boismint too when you are hunting for freshies. Lac du Lou has some of the best off-piste, with a 1,400 vertical descent accessed via Cime de Caron. And for a different thrill hit the 6km Péclet Funitel toboggan run – the longest in Europe.

Val Thorens’ village has, in recently years, seen a flurry of upmarket hotels and restaurants. In the evening the village has buzz galore. There are plenty of places to party, such as Red Fox just after the slopes close and later on the Malaysia cellar bar for live bands.

Daytime rail travel: Depart London St Pancras on the 09:45 Eurostar Ski Train, arriving at Moutiers at 18:15. From there it’s 55 minutes by bus or taxi.

Overnight rail travel: Depart London St Pancras on the 19:45 Eurostar Ski Train, arriving at Moutiers at 05:33. From there it’s 55 minutes by bus or taxi.

Plan your trip to Val Thorens at Snowcarbon.co.uk

Plenty to choose from in every direction

One of the Southern Alps’ big hitters, Alpe d’Huez is set in some of the most breathtaking scenery you could have the pleasure to ski. From peaks and runs, you’ll look onto magnificent views of the Oisans Valley. It’s quite something.

The off-piste on offer in Alpe d’Huez is incredible. Head up early, before the crowds, and zip to the ‘Sarenne’ run, which has some beautiful lines a short traverse away from the main piste – on either side. Locals will tell you to try the area at Grandes Rousses, and when you get there, you’ll be thanking them for them advice.

Terrain for everyone | L Salino

From the top of the cable car at 2800m the whole mountain range seems to open up and offer itself, with over more than 14 off-piste options including Perrin Sud, Perrin Nord and Couloir Fleure. The runs into Villard Reculas offer the chance for less experienced skiers to try powder, such is the rolling nature of the descents, shadowing red and blue runs. The runs tend to stay beautifully quiet too, especially at the outlying sectors of Vaujany and Auris en Oisans.

When you’ve gorged on the terrain, there are plenty of mountain restaurants  – charming places like Le Bergerie, where you can walk into from a snowstorm to find steaming plates of tartiflette and beaming faces.

Daytime rail travel: Depart St Pancras on the 09:17 Eurostar to Paris-Nord, change station and take the 14:41 TGV to Grenoble, arriving at 17:45. From there it’s 50 minutes by bus or taxi.

Plan your trip to Alpe d’Huez at Snowcarbon.co.uk

10 tips for booking cheaper train fares to the Alps 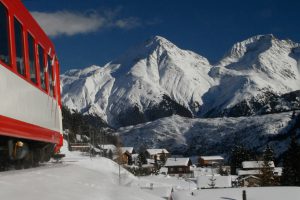 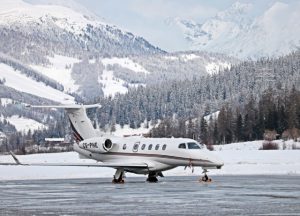 Five of our favourite journeys to the slopes 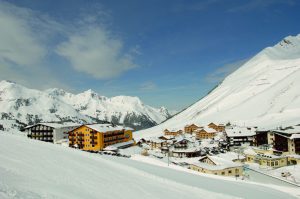