Fall-Line staff reveal their favourite journeys to a raft of European hidden gems, whether it be by chunnel, plane or train

MODE OF TRANSPORT Chunnel and car

WHY DOES THIS JOURNEY ROCK? As all Fall-Line readers know, the only place to create the globe’s most credible ski mag is the relief-free fenland area of the UK. This trip takes us from there to Kühtai, Austria, current home of the UK Ski Test.

The web says it’s eight hours door to door by plane via East Midlands, or 21 hours by train. Driving is just over 14 hours, allegedly. For pace, we’ve picked the Chunnel (though sometimes we take the ferry). We arrive early and get bumped forwards – hooray!

In France, you can choose whether to avoid tolls and nip up through Belgium, or scoot to Strasbourg and cross the Rhine at Baden-Baden (translated as Bath-Bath, named after the number of lorry divers’ cleansing facilities). 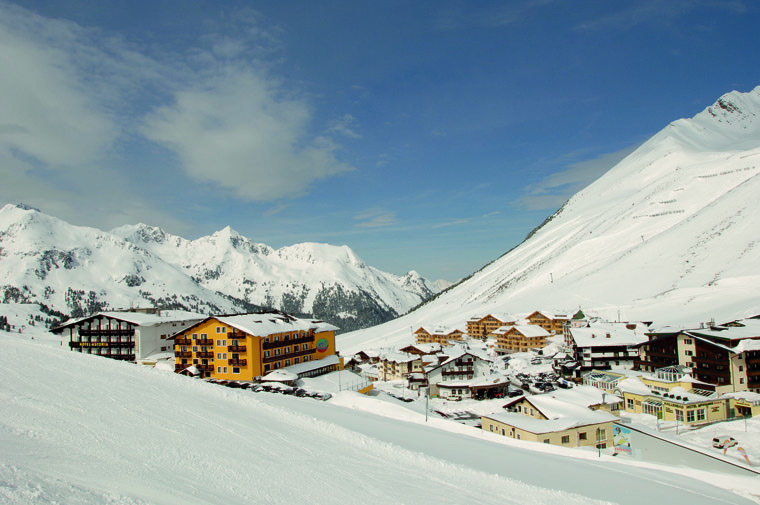 The reward at journey’s end

Whichever you choose, you head down past Karlsruhe to the next aiming point, Stuttgart. Last year we stopped there at the Mercedes museum with the family – an excellent day out for small girls, you wouldn’t think, and you’d be wrong! It’s a marvel; brilliantly laid out and full of mad old bangers and sleek uber-machines which captivated all of us, to my wife’s surprise.

We’ve run this route several times, always finding something relevant to stop at to break the journey. I recommend German Legoland – way cheaper and with smaller queues than the one at Windsor. Or the BMW museum in Munich for cars, bikes and the odd aircraft.

Petrolheads could take a detour to lap the mighty Nürburgring, the racetrack that’s now run as a toll road (€27) – a fast, one-directional toll road with umpteen nutters in deeply modified Porsches howling around it. But don’t be put off – anyone can set a lap record, it turns out. You just have to pick the right one: our family holds the record for the number of pipe-cleaner animals constructed in one lap.

Once we’ve made it past these distractions, we’re swinging past Ulm and Kempten to cross the border at Füssen. The road becomes wiggly but the passes are rarely blocked. Now we’re heading towards Innsbruck before swinging off into the Ötztal a few kilometres short of Kühtai. It’s that easy, even for us…

Last season our transport of choice was the mighty Subaru Forester. This season it’s the SsanYong Korando Sport. With roof-box and quite a lot of kit the Forester’s full, but there’s plenty of space for the off-duty driver to kip, while the passenger entertains with amusing facts, witty banter and messing up the satnav at crucial moments (take a map as backup). The other essential is a pillow – more comfortable than your fleece’s zip invading your ear as you try to catch 40 winks.

DO IT Eurotunnel from Folkstone to Calais or car ferry from Dover to Calais.

WILL ROBSON, WRITER AT LARGE

MODE OF TRANSPORT Plane and train

WHY DOES THIS JOURNEY ROCK? Southend-on-Sea to Bern-Belp is possibly a route to the Alps you may not know of. But if you want whizz through departures and arrivals in minutes, and be in resort within two hours, this could be the answer.

More specifically, if you live in the south-east and are heading to the Jungfrau region in Switzerland, and the famous resorts of Grindelwald, Wengen or Mürren, this gem of a route could save you time and money. 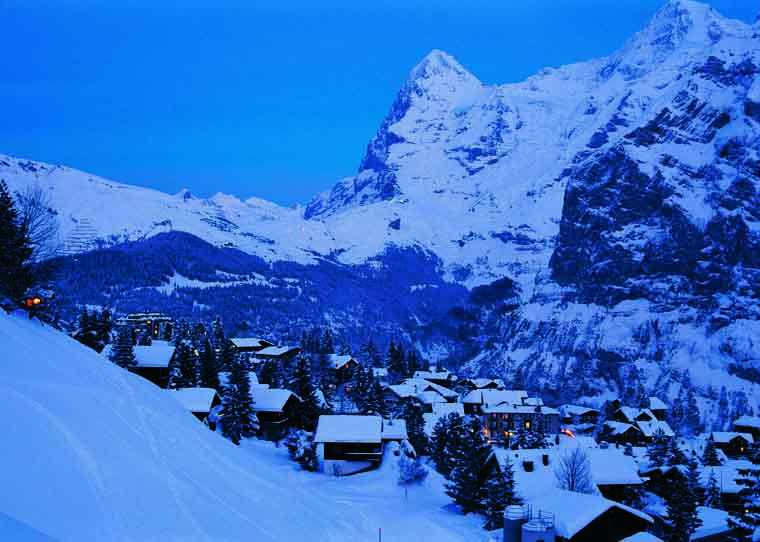 Mürren in its snowy glory

Skywork Airlines is based out of Bern-Belp, a small airport outside Swiss capital city. Sometimes this sort of airport is miles from the cheap weekend city break people want, but in Belp’s case, it’s the right side of Bern to be a mere 45-minute train ride to Interlaken Ost station, gateway to plenty of great skiing and an hour and a half faster than training in from Zurich or Geneva.

From Interlaken it’s 42 minutes to Wengen, the historic car-free resort beneath the north face of the Eiger; or an hour to Mürren’s Schilthorn station, home of serious off-piste and the annual Inferno race. A return ticket from Bern-Belp station to a Jungfrau resort averages CHF86 (£56).

Southend Airport is similarly bijou in size, but with eight trains an hour out of London Liverpool Street, you’re there in just over 50 minutes for a £30 return ticket. It’s a Skywork 1hr40min flight to Bern in a turbo-prop plane, for that more elemental flying experience. And actually you’re not restricted to flying from Southend: TopSwissSki.com run a (rather pricier) weekly charter with Intersky Airlines into Bern-Belp in January and February.

DO IT London Southend to Bern-Belp costs around £160 return with Skyworks . Flights from Humberside, East Midlands, Norwich and Bournemouth cost from £449 return.

MODE OF TRANSPORT Plane and taxi

WHY DOES THIS JOURNEY ROCK? Three words: Short transfer time. I’m a little tired of resorts who claim their two hour journey from the airport makes it ideal for a long weekend getaway. Utter rubbish. By the time you’ve disembarked, lined up at passport control and tracked down your skis in some distant outsized baggage office that “quick transfer” will turn into a hellish late-night escapade through Friday night traffic and along icy roads.

So imagine my glee when I read about Krvavec, which is just a 15-minute drive from Ljubljana airport. Actually, we think it’s the nearest ski resort to an international airport in Europe.

So how the heck had I, a ski journalist, never heard of it? I assumed it must be a truly terrible resort. But no, after a quick weekend there (five hours door to door) I can safely say it’s rather good, with every type of skiing you could want: cruisey reds, gnarly moguls, untouched lift lines, a neat little park and a smattering of trees. All packed into a 106 hectare resort. 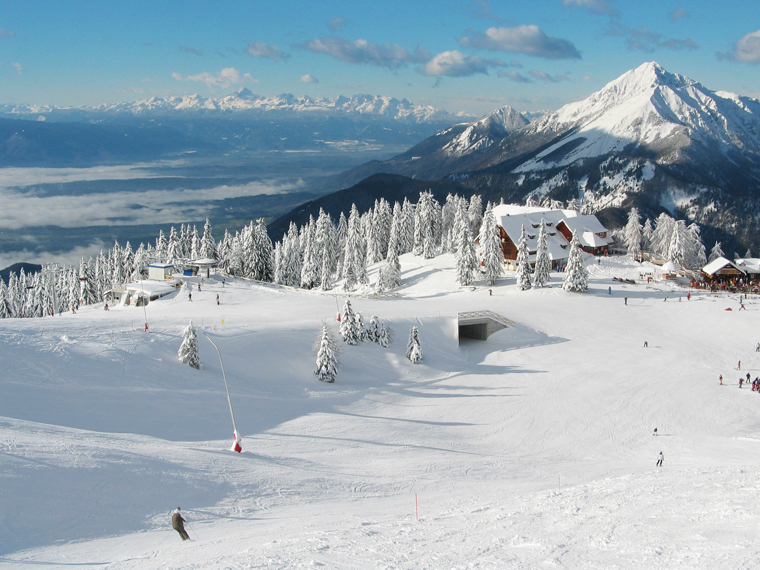 I’m not saying you’ll want to spend a week here, but three days? Heck yes! Especially when flights from Luton with Wizz Air can be snapped up for £12.99 (even in January!) and lift passes start at €26 a day… Why no Brits go there is still a mystery to me. Perhaps the name – impossible to pronounce or spell – has prevented it from spreading via word of mouth, or even Google?

One last thing: although there are a couple of hotels up the mountain, the lack of nightlife can be a downer, so spend a night in Ljubljana itself – easily my favourite European capital, with Kodak moments on every street.

DO IT Wizz Air from Luton or Easyjet from Stansted to Ljubljana, then taxi it to Kvravec gondola station for about €20.

MODE OF TRANSPORT Plane and taxi

WHY DOES THIS JOURNEY ROCK? The lid is off the Lyngen Alps. Everyone has heard, and everyone wants to go. Unfortunately, the hotels and available slopes are buckling under the pressure. So to experience all that is magical about the summit-to-sea experience, but still make your own tracks, get a boat and get afloat. Once you land in Tromso, a 15-minute taxi ride and you will be aboard the SY Destiny supping a dram (which you bought duty-free of course – this is Norway!). 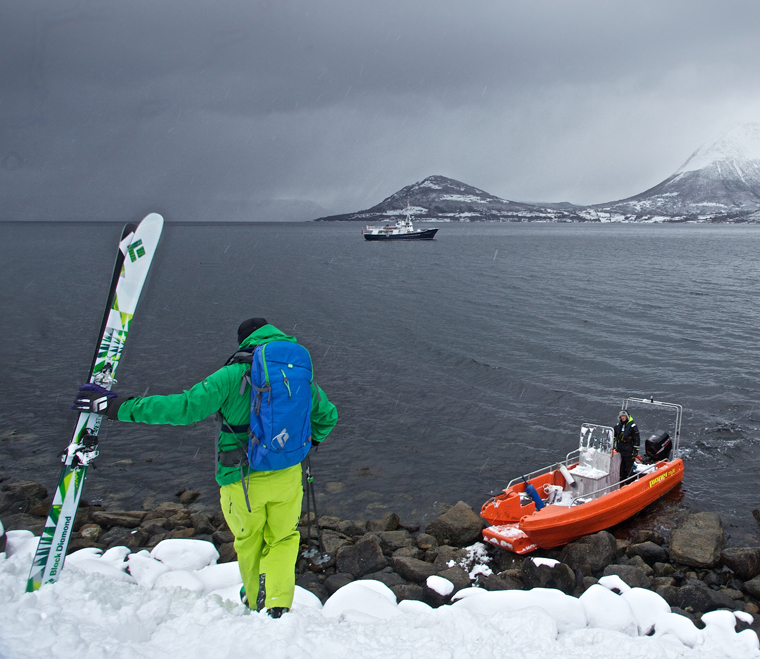 Take the boat to powder| Will Robson

Then throw yourself at the mercy of the superlative conditions on the fjords and fjells. Yours will be a continual adventure of remote landings, island traverses and virgin slopes, as you reach the parts that other skiers can’t reach. Northern lights an optional extra.

The SY Destiny is a 48ft yacht available for hire – it comes fully catered and crewed. Get involved with the sailing if you wish or stay below and eat cakes.

DO IT Norwegian Air flies direct from Gatwick to Tromso on Fridays. Then pick up a taxi. To stay on the SY Destiny see sailinghols.com, or Zuba Ski offers tailor-made boat-ski trips from February till early May.

MODE OF TRANSPORT Ferry and car

WHY DOES THIS JOURNEY ROCK? Yes, I use planes, trains and buses, and I appreciate a swift hop to the mountains at 33,000ft as much as the next skier, though I hate the faff of airports. I have loved the two train-only Euro-ski-trips I’ve done: Euston to Aviemore, and St Pancras to Zurich, via Paris, during the Iceland dust-cloud. But what I prefer is the fun and flexibility of driving to the snow with friends or family. 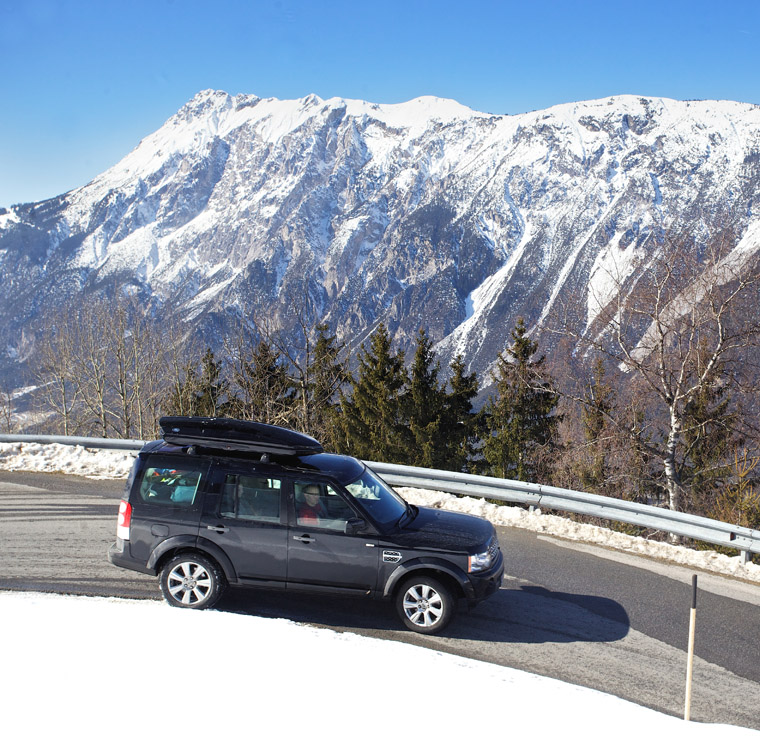 The road from Kühtai

From Peaslake in Surrey (where I lived till last year), I set off as rush hour subsides and catch a pre-booked ferry at 10ish. Read the papers, admire the sea, watch the lorry drivers eating their colossal English breakfasts. What with the time change it’s past midday as we hoon down the deserted A26 autoroute, racing through my dodgy CD collection and using a télépéage gadget to cruise through the tolls. As we pass Laon out come still-hot sausages in foil, bits of cheese and tangerines. If I’ve been organised, tea from a flask follows.

Only stopping for loos and fuel, we eat up the kilometres. Reims and Troyes slip by, though things steady up when we leave the motorway at Longeau to take the nicely straight A67 past Gray and Besançon. Then it’s over the Jura (passing button lifts and a chair), over the Swiss border at Vallorbe and down the A9 motorway into the Rhone Valley, via Lake Geneva.

We arrive in Anzère – a 20-minute snake up from Sion – in time to head to the Pizzeria d’Anzère on the square for a spaghetti du chef and a carafe of Fendant.

My route takes less than nine hours from Calais. But there are tons of places to stay on the way if desired: handy and great value is the Val Moret near Troyes, with rooms from €70 (family rooms €95), a ‘stopover menu’ at €15.80 and a pool.

Anzère – a hidden gem if ever there was one, with 55km of pistes – typically brings fabulous skiing on peaceful slopes, with a 180° view, from Mont Blanc in the west to the Bietschhorn, via many Swiss 4000ers. You can explore the trees or lap the off-piste off the Grilleses or Les Rousses chairs; picnic by a cow shed, cooking sausages on the fire inside; play on the snow-cross course or the park; tour to the Wildhorn; maybe do a day-trip to Crans-Montana, Veysonnaz or the Val d’Anniviers.

Now I live in the north I need new routes. The overnight ferry from Hull to Zeebrugge looks tempting.

DO IT Car ferry with myferrylink.com, from £35 each way for any duration. Télépéage gadget (€30 set-up plus nominal subscription and tolls at normal rate) from saneftolling.co.uk/subscription. The Val Moret is at junction 22 of the A5. In Anzère, book an apartment or stay at Hotel Zodiaque.