Tom Leahy forked out £800 for two days’ cat-skiing. His verdict? Worth every penny

I remember the first time I saw Matchstick Productions’ seminal movie In Deep. On a ski-buddy’s recommendation, I’d downloaded it and settled down on a rainy autumn Sunday to watch Mark Abma and pals throw themselves off cliffs and down chutes, and float through bottomless powder. One scene sticks in my mind: 16-year-old Sean Pettit hucking cliffs and slashing down Alaskan spines to the sound of The Who’s Baba O’Riley.

Skiing those spines myself (albeit more tentatively), or going anywhere under the heli-power that took Pettit there, was beyond my budget. But at my desk in dreary London, daydreaming about that scene, I wondered about the ‘poor man’s’ version: cat-skiing. 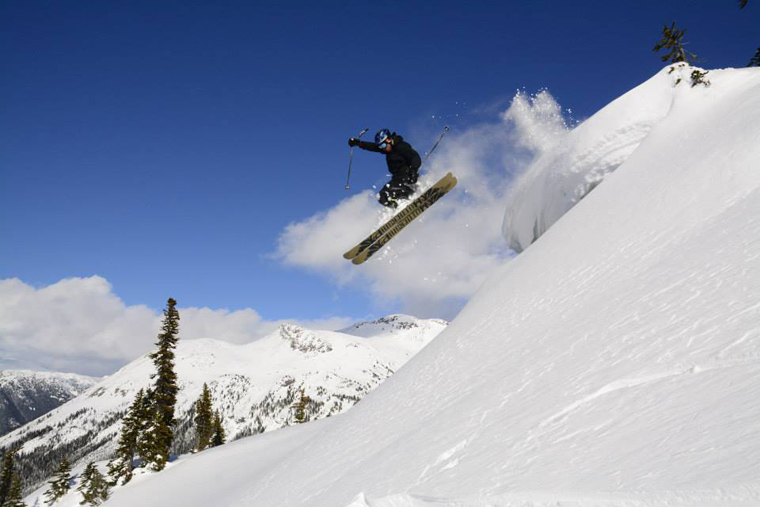 I procrastinated, then last winter a chance arose to join a trip to Backcountry Snowcats at Hurley Pass, British Columbia, with the Alltracks Academy, with whom I’d once done an off-piste course in Val d’Isère. I jumped on the idea of 15,000 acres of terrain, 10m of annual snowfall and Jeremy Jones’s seal of approval and booked up quicker than you can say awesome-stoked-ripper.

Alltracks runs instructor courses in nearby Whistler, so to get me prepped for the cat I had tuition with Guy Hetherington, their lead instructor and two-time winner of the Whistler Powder 8s.

Guy is the go-to man there if your skiing needs fine-tuning and I floundered in his wake as he swept down in a series of aggressively elegant turns. We hit Couloir Extreme, Chainsaw Ridge, Bushrat, Jersey Cream Bowl and Pakalolo, finishing with a hike up Spanky’s Ladder and into Sapphire Bowl, where we found fresh tracks days after snow. Almost a day-trip of a lifetime in itself, and after tips on technique, trees and steeps, I was good to go.

Access to the Backcountry Snowcats lodge is via snowmobiles from the end of the Tarmac north of Whistler and Pemberton. After 90 minutes of sledding, we pulled up at a low-slung prefab building on the valley floor. Next to it sat the shiny red cat.

After an early night and pancakes with bacon for breakfast, it was outside for the safety briefing – marking the start of the bluebird powder day I’d been dreaming about since Sean came into my life. Which tune did I pick to rev me up as the snowcat roared up the mountain? Baba O’Riley of course, and Roger Daltry’s screams of ‘teenage wasteland’ were still pumping out as the cat jerked to a halt, pivoted 180 degrees and disgorged us into paradise.

The avalanche risk – thanks to plenty of fresh fall – meant we wouldn’t be skiing far above the tree-line. That suited me nicely: trees are part of the reason to cross the Atlantic after all. We started with mellow slopes before getting steeper and deeper, and soon we were riding glades, gullies and chutes, dropping off every terrain feature in sight.

Mid-afternoon, towards the back of the group, I stood at the top of yet another drop. My heart somewhere in my mouth, I asked Jerome, the tail-guide, what he thought. “Huck it!” came the response, more instruction than request. I channelled my inner Pettit, dropped, landed and dived through the trees, whooping and hollering. 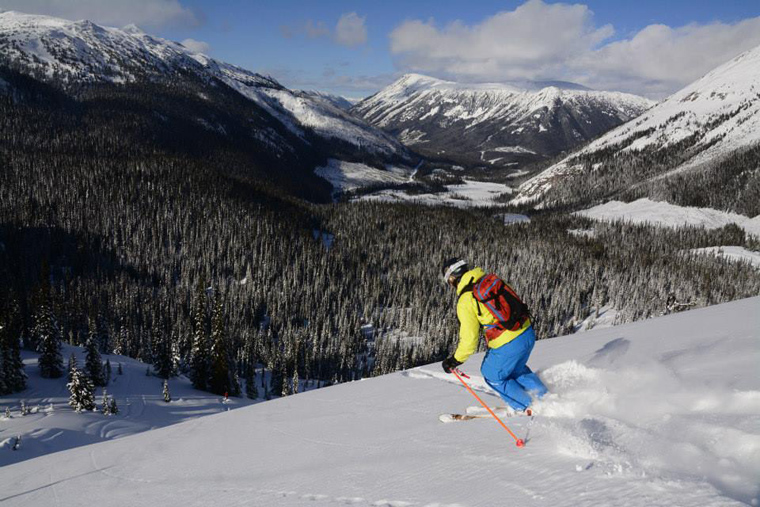 With a fast group the guides reckon you can manage 15 runs a day. We were quick-ish, and after time posing for photos we got 13 untouched, perfect powder runs.

Back at the lodge, sinking a few snow-chilled pale ales in the hot tub, I watched the sky turn from blue to pink to black and I couldn’t stop smiling – I was only halfway through!

On day two blue sky was in short supply. But the turns weren’t, and we had another nine runs of powder joy. With more of Jerome’s encouragement – “Just huck it!” – I hit my first pillow line and watched Alec, our own Pettit lookalike, nail a 40ft tabletop.

Time flies when you’re having fun and it was over too fast. But you know what? I had enough powder turns to last me… not a lifetime, but the long summer. The two-day trip to Hurley Pass cost £800, which is as much as most of us spend on a week’s skiing. But for the moments and memories, it was worth every penny.