Who can knock the Austrians off their World Cup thrones, asks Graham Bell

It is a fallow season with no World Championships or Olympic Games in 2015/16, so all eyes will be on the World Cup titles, and it will take something very special to wrestle the Overall prize out of Austrian hands. Marcel Hirscher has won the last four and Anna Fenninger the last two.

On the Men’s side it is really hard to see who, if anyone, can challenge Hirscher if his dominance of the technical disciplines remains strong, and Fenninger will have been buoyed by the news that her great rival, Tina Maze from Slovenia, has opted to have a whole year off. Maze at 32 years old reported that her body had taken much longer to recover from her season’s efforts, which saw her take two golds and a silver medal at the World Championships in Vail and narrowly miss out on the Overall World Cup title in the last race of the season. It is an interesting move that has never really worked in Alpine ski racing, where technical skill and equipment set-up count for so much. 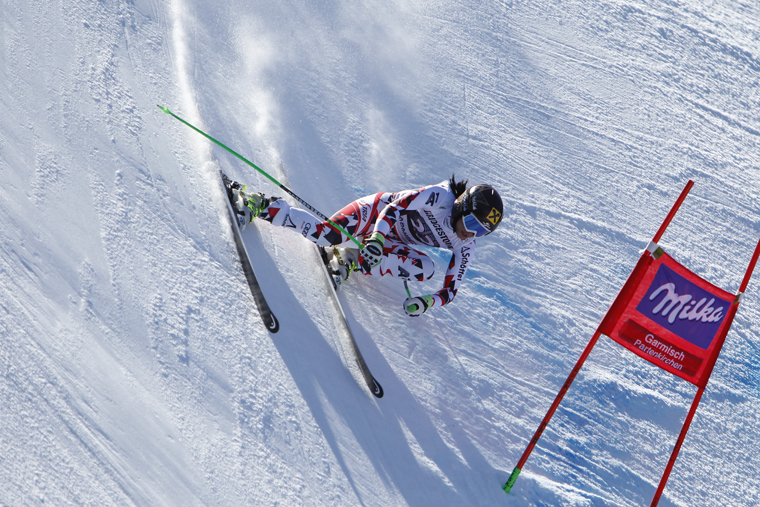 Fenninger chases down that elusive Milka bar… | Courtesy of Head

The Lindsey Vonn winning machine got back on track last season, after her enforced year off through injury. The World Championships in her home town of Vail may have come just a little too soon, a single bronze deemed a disappointment by her standards, but she finished the season in style by winning both the downhill and super-G titles. In the process the 30-year-old Vonn equalled the great Ingemar Stenmark’s record of 19 World Cup titles; she is now homing in on his record of 86 World Cup wins.

At 67 wins Vonn could theoretically wrap that record up within a couple of years. Vonn’s win average, apart from her injured year, sits at nine wins per season since 2009. Vonn will no doubt be looking to challenge Fenninger for the Overall title, but she will need to be on top form in the speed events, as Fenninger is quite capable of picking up wins in every discipline but slalom.

Mikaela Shiffrin, the young pretender to Lindsey Vonn, at 21 years old, has already won almost everything possible in the sport – Olympic and World Champion plus World Cup title winner in slalom. Shiffrin won her first GS in the World Cup opener in Sölden last season, but had a shaky start to the last season in slalom. If she can start this season strongly in both the technical events, do not be surprised if she were to add the occasional super-G to her race schedule, much as Marcel Hirscher did last season.

Pyeongchang 2018 is still three seasons away, but I’m sure we will see Shiffrin slowly add the occasional downhill too, with an eye on the Olympic combined event.

Marcel Hirscher put on some beef in the gym last season and it had a very positive effect on his GS form; he even recorded a career best fourth place in super-G at the World Cup finals in Méribel. His biggest threat to technical dominance will come from the young Norwegian Henrik Kristoffersen, who notched up a first career win in GS and remains fast and exciting to watch in slalom.

In the speed events it will be interesting to see how Norway’s Aksel-Lund Svindal comes back. He shares a pool of Head race skis with his team mate Kjetil Jansrud, with the better ranked skier having first pick. In Svindal’s absence, Jansrud wrapped up the downhill and super-G titles last season and gave Hirscher a run for his money in the Overall; this season his biggest challenge will most likely come from close quarters.

However, never rule out the Austrian downhill team led by veteran Hannes Reichelt and Olympic Champion Mathias Mayer. They posted a clean sweep of the podium in Saalbach at the end of last season, and will look to capitalise again this year. Finally, USA’s Bode Miller has still not hung up his boots. The 38-year-old has unfinished business on the Hahnenkamm in Kitzbühel; victory there would be the ultimate fairytale end to his career.  FL

*Note: Since this was written Anna Fenninger injured her knee in training, and is likely to miss the 2015/16 season