From K2 Fours to Salomon Axe Cleavers, Simon Ashton reflects on the long evolution of skis. And no, before you ask, he’s not quite old enough to have learnt on leather boots and wooden planks, thank you very much

I’ve been skiing for 36 years, which in itself is a frightening thought, but during that time I’ve been lucky enough to play with many new innovations as they were introduced to the market – although my first ventures into skiing were not exactly cutting edge.

I used to laugh at other skiers who claimed they’d learned how to ski in leather boots and on wooden skis – how absurd in the age of plastic! But that began to date me, especially when my dad recently started digging out the school letters inviting me to join ski trips from the early 80s. 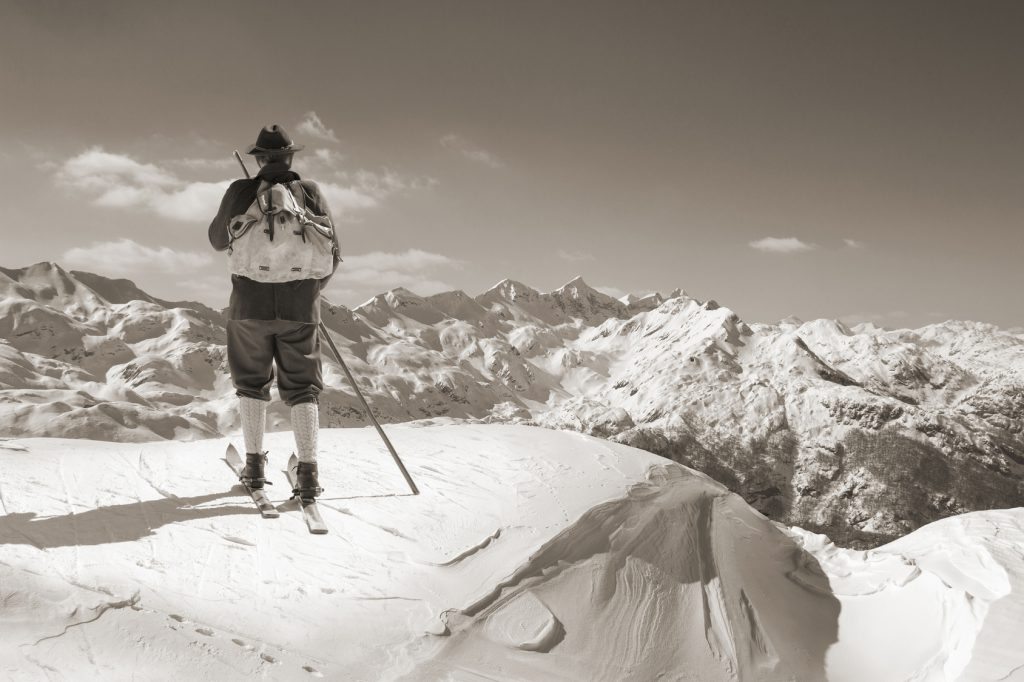 Simon Ashton scopes out a line… (we joke Simon, we joke) | Fotolia.com

My second ski trip, for the princely sum of £189, included everything a working class kid from Sheffield needed to venture into the snowy wonderland of the mountains. I was 15 then, but that wasn’t my first trip; I’d been introduced to skiing in Norway at 11, and running up to that particular trip had pored through every book in my school library on Norway. Well, when I say every book, it was actually ‘the’ book (the library was neither extensive nor had a particular focus on Norway).

Nevertheless, Norway looked amazing and according to ‘the’ book, everyone wore traditional ‘bunad’ and kept reindeer. If skiing, people wore frail-looking leather boots that only just covered the ankle – these looked pretty dangerous to me and allied to bindings that didn’t release at the toe gave rise to all of those boot top breakages that now populate any cartoons on skiing.

Imagine how disappointed I was when we got there and I found no one wearing bunad and not a reindeer in sight. On the plus side, the boots weren’t leather but big sturdy plastic blobs secured by long wires connected to grooved clips – much like Full Tilt’s current design. The skis were compacts but the bindings were plate bindings, a 70s fad particularly liked by ski rental shops.

In ‘97, the K2 Four hit the UK market. This was a revelation to me as the first shaped ski I came across. Until the early 90s, skis were painfully thin and straight, taking a very skillful skier to get anything like a carve out of them. In the late 80s and early 90s Elan started developing skis with deep sidecuts for GS racing with some success, while Kneissl developed a recreational ski on the same basis. But K2 was the first really major manufacturer to jump on this particular bandwagon – with their first success with the Four on the feet of a young Bode Miller.

Now it wasn’t a super-radical shape with a 22m turn radius in a 195cm, but compared to skinny skis it was a revelation turn and grip wise. Finally, carving was achievable to all! I went out and got me a pair of Salomon X-Screams, a brilliant ski of the same ilk, which I could get straight from the manufacturer.

Many smaller ski shops were left with unsold stocks of skinny skis as shaped skis became the must-have, with deeper sidecuts and more radical shapes. I picked up some Salomon Axe Cleavers in 152cm, which carved a 10m radius and I hooned around Sheffield Ski Village seeing how far I could tip the skis over before burning the material of my ski pants against the slope bristles. After a couple of years the shapes began to mellow and FIS started regulating sidecut, length and stand height of skis. Instead of Axe Cleavers my carvers became Factory Atomics in a longer 165cm and 14m turn radius, still short but nowhere near as radical.

In ’98, while I was pestering Davee Mercer from Salomon for prizes for a dry slope mogul series I organised, he gave me a video featuring the New Canadian Airforce (Google them) ripping terrain that had been the preserve of snowboarders on a strange pair of orange and black skis called the Salomon 1080, which had – wait for it – a tip at both ends so you could ski AND land backwards without the risk of catching the tail. Wow, why hadn’t someone thought of this before?

Well they had (Olin Mark IV – I hadn’t heard of it either until I researched twin tips a few years ago), but Salomon were the first to market it successfully as a ski to spin and land switch. After watching the video 20 times in a day – it was only short – I begged Davee to sell me a pair when they reached the UK, which he graciously did and the world of park and pipe opened up to me.

Sadly lacking in skill, courage and youth I was never going to be one of the leading skiers in the ‘New School’ movement, but at least I could coach and manage people who were actually good enough. Those orange Salomon skis set me on a fantastic journey with those talented skiers who could make the new wave of twin tips perform in the way they were designed.

In the 90s I worked for Interski in my spare time teaching school kids. On a few occasions when I had time off, I followed a very talented boarder, Dave White, out into the ‘backcountry’. I tried to follow Dave’s turns on my skinny Salomon 2S skis. My skis really weren’t up to it and it took manufacturers to produce fatter skis with reverse camber before I could make the same sort of surfy turns as a boarder.

It all started when the late Shane McConkey persuaded his then sponsors, Volant, to produce a ski with minimal shape and a crazy rocker – an idea he’d come up with after skiing a bent pair of skis. This new shape and camber only began to take off in the mainstream when he moved to K2 and developed the Pontoon and the rest, as they say, is history and rockered skis began to proliferate in the late noughties.

Simon Ashton is the chair of the British Freestyle Ski Team.