All it took was a three-word text, “Brenva is good”, to motivate my Italian friend Enrico Mosetti to jump in his car and drive seven hours from the Italian-Slovenian border to Chamonix. It would be the first route of my Alpine Trilogy Project, taking advantage of the short 10-day window for skiing big steep mountain lines in late May, without a heli or external assistance. 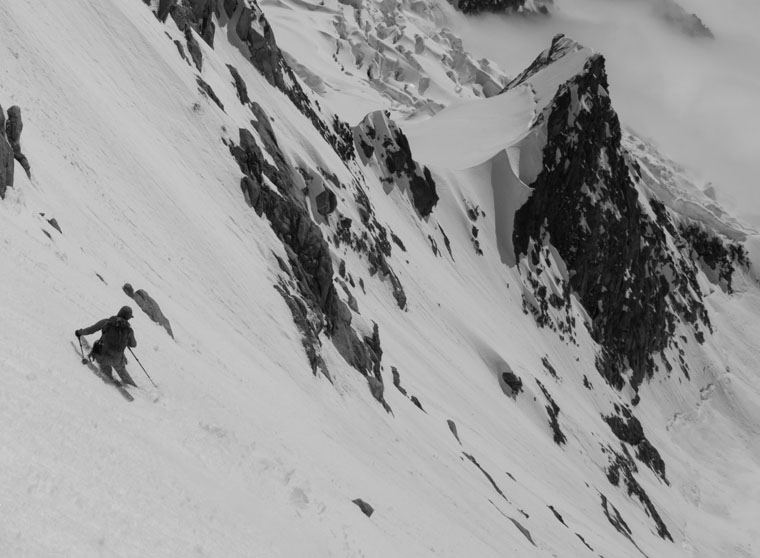 The reward: an epic descent (in this case the Brenva spur)

The project was simple: a personal challenge to ski and photograph three of the biggest, baddest and hardest ski lines in the Alps: Switzerland’s iconic Matterhorn, the Himalayan-sized west face of Mont Blanc, and the notorious Brenva Spur on the east face of Mont Blanc. This project would prove to be a challenge enough just to ski, but to carry the extra 2.5kg of my SLR and take photos of my partners on these steep faces would add another level difficulty that had me second guessing my likelihood of success from the off.

A 3am alarm tore us from our dreams in the Cosmiques refuge, located at 3613m and accessed from the Aiguille du Midi cable car – gateway to Mont Blanc. After forcing down as much food and water as possible, Tom Grant (pro rider and Chamonix local), Enrico and I headed out into the night to ski down the Vallée Blanche, Europe’s most famous off-piste descent. 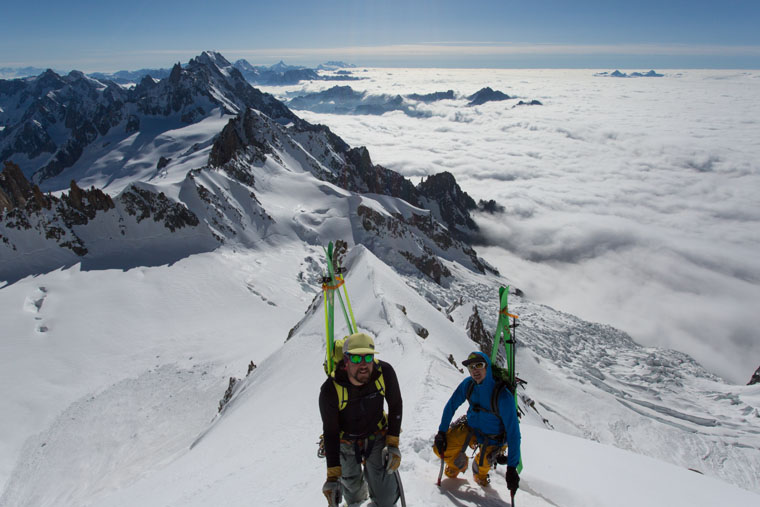 Up, up, up: Enrico Mosetti and Tom Grant during the climb to the Brenva spur.

It was ink black and the usual summit reference points were cloaked in darkness. My torch beam seemed to be absorbed by the dark rather than lighting up my path. Suddenly something unfamiliar started to appear out of the darkness. We hung a left to ski parallel to the chaotic jumble of ice blocks that were up to 4m high, now aware that the serac under Col du Diable had dropped.

We continued down the Vallée Blanche parallel to the avalanche, adding distance to our day. Eventually, after nearly a kilometre, we were able to ski round the toe of the debris and start back towards Cirque Maudit. Our friends had passed this way the previous afternoon, so we knew this biblical-sized serac fall had happened in the last few hours.

At Col de la Fourche the sun peeped over the eastern skyline. In front of us the Brenva face revealed all its greatness to us in a scale that was difficult to judge.

Crossing Col Moore at 7am we stashed all excess kit to reduce our pack weight before starting up the route. Estimating the snow would be soft enough to ski by 8.30am gave us a leisurely 1.5 hours to bootpack 700m.

Soon we joined the curling arête of the Brenva Spur and covered the final few hundred metres to the pyramid rock tower, gatekeeper to the serac exit onto Col de Brenva. Stamping ledges in the snow we swapped crampons for skis and took in the epic surroundings. The vast east face of Mont Blanc lay to our right, a crazy mix of couloirs, buttresses and tumbling seracs.

Boot-deep, sun-kissed powder over the glacial ice waited for us on the upper section, but how would it ski? After the first turn revealed no surprises we skied some cautious turns, allowing our sluff to run in front until we had passed a section of really shallow snow over the ice. As the angle eased, we opened it up and a dozen sensual turns took us to the arête. I took a few more pictures before we met wide open slopes holding perfect spring snow, dropping a couple of hundred metres in five or six swooping turns. As Col Moore came into sight we all skied down together with smiles on our faces.

Three days later we were back at the Cosmiques hut. Once again the alarm pulled me from sleep at an ungodly hour, but my spirits rose as I looked outside and was greeted by the rest of the twinkling galaxy. After a speedy breakfast, I stepped into the cold predawn air joined by three of the strongest ‘under the radar’ skiers you could meet: Mikko Heimonen, Jesper Petersson and skier-journalist Guilhem Martin Saint Léon.

For the next few hours we just needed to keep to time, eating and drinking on the move and avoiding unnecessary stops. As we skinned up Tacul (4248m), the glaciated peak that dominates the foreground view from the Aiguille du Midi, the temperature continued to drop and the wind increased in strength, making it feel pretty hostile. On Col du Maudit the wind was driving snow and we stopped to put on all our spare clothes. 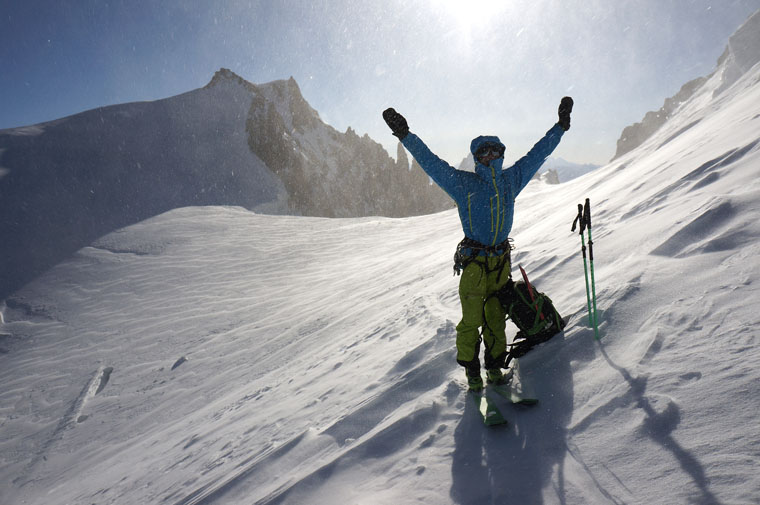 We plodded on, feeling the altitude and trying to keep our extremities from freezing. At the top it was a relief to drop down the Italian side a few metres and get out of the wind. Mikko made the understated comment: “That took the prize for the worst day of the season.” Below us the west face rolled over out of sight in vast featureless snow slopes and we were filled with anticipation.

The top few turns were scratchy, with ice underneath, but after 100m we got onto good snow alongside a buttress, then skied a fantastic long pitch on what must be the highest spine in Europe. We worked hard, trying to keep to time, knowing that would be the only way to pass safely through the glaciers 2000m below.

A traverse over a rock rib took us into the south-facing Saudan line, a 50° couloir that fell away below us for 1000m. Now that the exposure had eased we could relax and enjoy good consistent snow which continued all the way to the lower apron. As we crossed the bergschrund we had been skiing hard for an hour and half but we were still above the top of the 3424m Petit Mont Blanc. 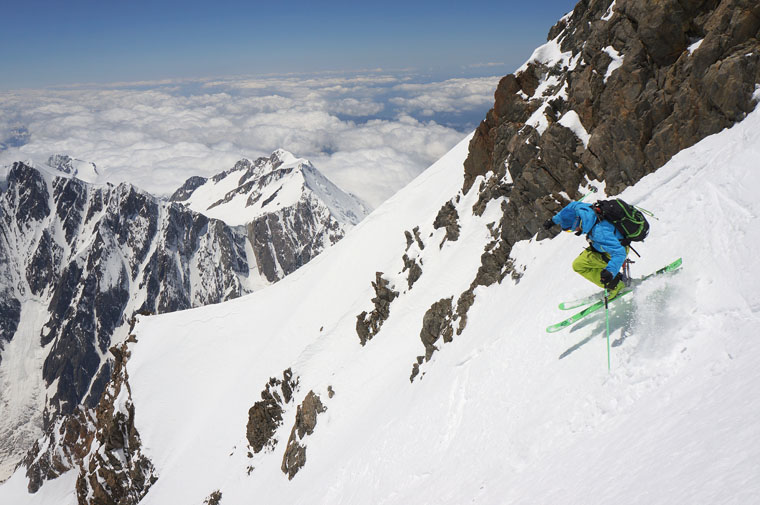 Our route was to skin to the shoulder above the ancient Quintino Sella bivi hut and then ski the west-facing couloir to the Dome glacier. Our timing was perfect and we found creamy spring snow in the 600m couloir which we skied the whole way together without stopping in under five minutes. The Dome had been a worry but after roping up it only took a few minutes to cross and the uncertainty lifted. A few hours’ more effort got us to the road where a friend picked us up.

The final objective. We headed in the hard way. Because the Hörnli refuge was closed for renovations, Mikko and I were carrying a tent, sleeping bag, stove, and a gallon of water each on top of the usual stuff. It was hard to know what to expect on the face, as so few people ski it. A local guide had told us it wasn’t very steep, but looking at it from our campsite made the nerves jingle.

The alarm sounded at 2am. We packed up and set off. The tip of the Matterhorn was the first thing to be hit by the rising sun and it resembled a blade with blood red streaks on it. This brief morning Alpenglow was soon replaced by a golden light. We climbed the face using ice axes and crampons in a slow rhythm aiming for the central couloir that ended at the rocky headwall. I was aware temps were rising fast, which would eventually make the face unsafe; speed would be our friend. 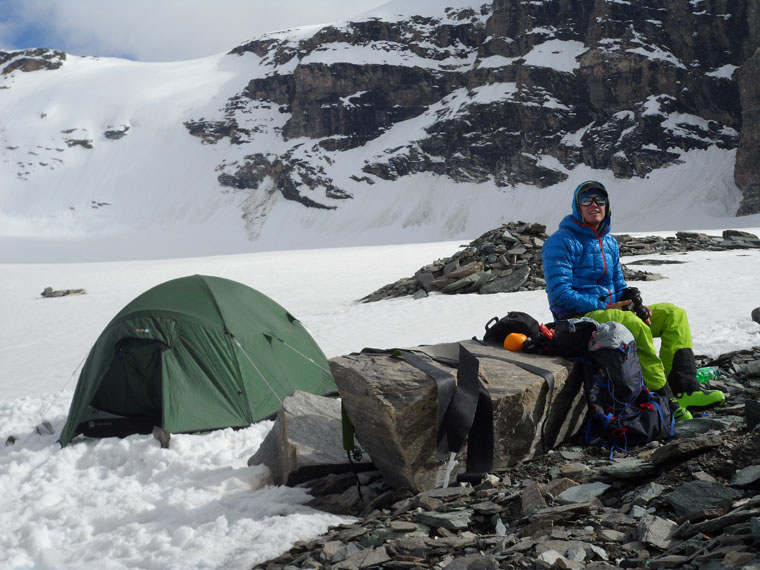 From the top of the skiable terrain the first turn would be on unforgiving 55° spring snow. Simply standing still and holding an edge had every fibre in the body working overtime. I was still clipped to my ice axe for security while I adjusted my camera settings. Mikko left the sanctuary of his ledge and with axe and pole in one hand committed without hesitation into a series of beautifully linked chop turns that you’d have been proud of on a lift-accessed Midi North Face run with fresh legs.

My turn. I was excited but nervous. The face was very exposed looking down uniform rock slab covered in some snow for 1000m. I had been focused on locking my body into a stable platform to shoot from and now I needed to loosen my muscles and refocus on skiing.

After side-slipping a few metres to get the feel of my skis underfoot it was time to commit… no problem, this will be fine. As the angle eased to 50° the snow softened, and when we entered the central snowfield, where the angle is 45°, we had a lot of fun skiing fluidly and playing with the sluff down to the lower rocks.

The angle increased here and it took time to find our bootpack to lead us through the lower slabs. The lower crux traverse led through a peppered icy zone to take us to the schrund. All too soon it was over and all that remained was to get clear of the face, which would soon start shedding thousands of tonnes of snow in the heat. We rappelled through the lower rock band and then skied to our camp that we had left 10 hours before.

Somehow we had pulled of the Alpine Trilogy Project in 10 days. It hadn’t sunk in, but I had an enormous sense of satisfaction. As we packed up our tent, the searing temps started to strip the rock slabs of their snow and I knew they would be my last turns of the season – and some of the best of my life.