Want to ski some of the 4000m-plus peaks that surround this glacier-swathed Swiss spot? Here’s how to do it… 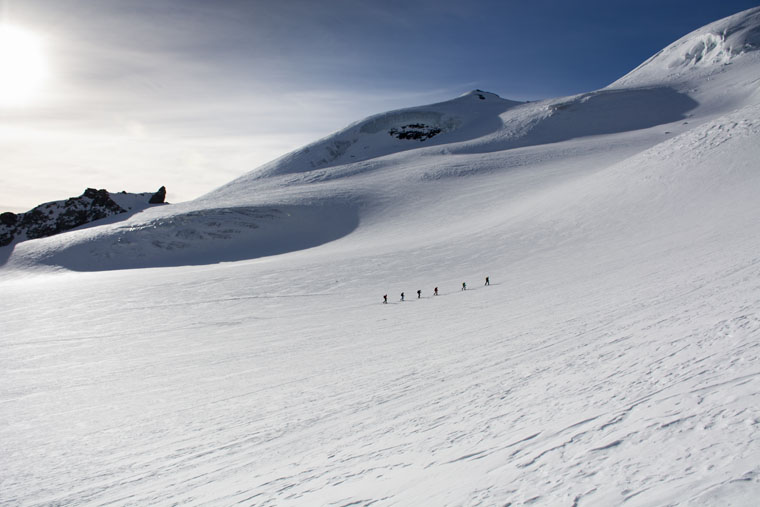 Saas Fee is in the heart of Switzerland’s mighty Pennine Alps. Known in recent years as the place to go for summer snowpark training, what it really does best has remained unchanged for the past few millennia: big mountains. Eighteen peaks over 4000m for a start, and many of them the perfect shape for climbing up and skiing down.

True, some of the descents may not be the gnarliest in pure skiing terms, but when you put everything together – the top-of-the-Alps altitude, views so huge you’re looking across several countries, and glacial ambience – it takes some beating. At this altitude you can’t expect powder snow to hang around for long – there’s wind, sun, storms – and conditions under-ski can frequently be what is politely called ‘challenging’. 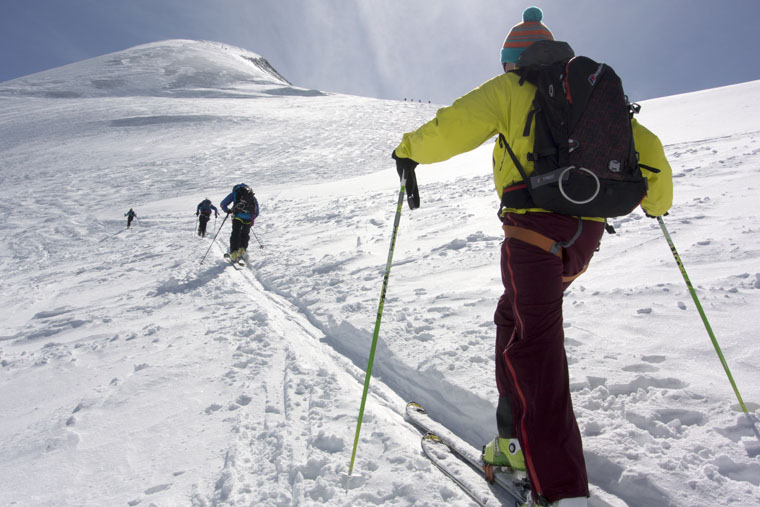 But that only makes the good stuff even better when you find it, which you will at some point during your day. And when you throw in the resort’s powerful, super-high lift system for speed and convenience, and one of the handiest high-mountain huts you could imagine, the Britannia, this place should be at the top of your list if you want to experience high-altitude touring, glacier travel and big descents.

For a quick hit

Short of time, fitness or experience but still want to hit the magic 4000m mark? Start with the Allalinhorn: by lift to the Mittel Allalin at 3500m, pausing for a coffee in the rotating restaurant (if your head’s not spinning already from the rapid ascent, it will be after that). It’s then a short traverse and a skin to get you to within staggering distance of the top. Depending on the conditions, you might not even need to put crampons on for the last bit. 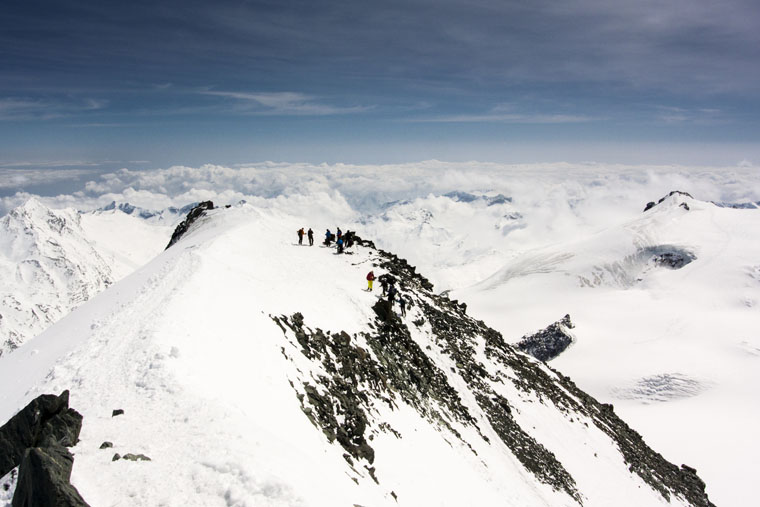 On the 4027m summit of the Allalinhorn | Penny Kendall

The ski back down is a good one. Nothing terrifying but some good pitches over the wide glacier you’ve just ascended. Just don’t confuse this introductory jaunt with the tricky way up from the other side – an entirely different proposition, even if you end up clinging to the exact same summit cross for your photo.

If maximum skiing is your aim, the 3795m Fluchthorn is worth a look. Take the Alpin Express lift to reach the world’s highest subway: the Metro Alpin funicular. It has a request stop, leading to a small tunnel which exits handily out of the cliff through which the train climbs. Definitely not recommended for anyone with a fear of heights, it’s a cracking way to start your ski day once you’ve broken through the often snowed-up exit above the glacier. 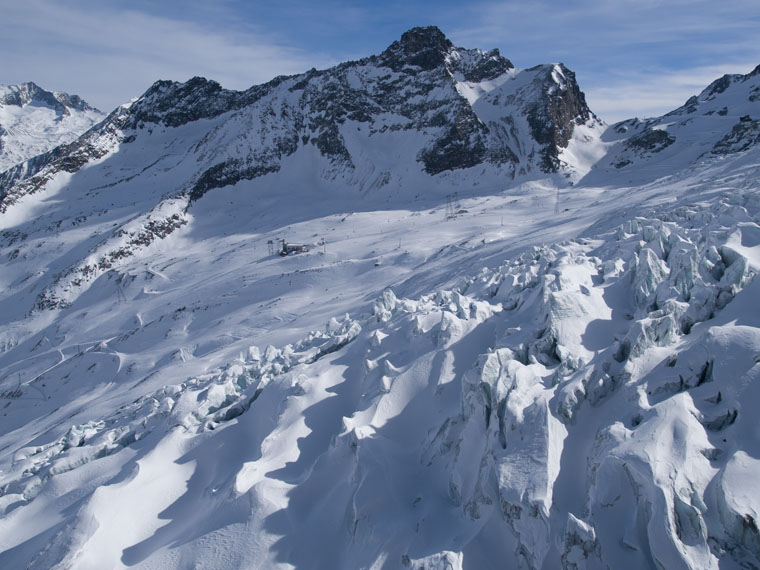 Glacial terrain on the way to Fluchthorn | Penny Kendall

That leaves an uncomplicated skin – climbing about 500m – to your summit. A frequently icy last pitch means you’ll want to cache skis on the Fluchtpass before heading up for epic views of the Monte Rosa massif, and a sandwich, before down-climbing, de-skinning and getting going asap. Because the only sensible thing to do from this point is to ski down to the Mattmark dam, 1600 glorious metres below.

That kind of vertical on the north-facing Allalin glacier ought to give a little bit of everything in terms of snow conditions, including powder somewhere along the line – the glacier is, after all, a massive deep freeze in the lee of huge mountains to the west, where the weather generally comes from. The scenery isn’t half bad either, with epic icefalls halfway down and yawning deep blue open crevasses (sensible skiing required here).

F0r a descent into Zermatt

Of course it’s not just about peaks. If you’ve forgotten your money for the bus and need to get to Zermatt, the ski down from the Adlerpass is without doubt more rewarding than hitching round by road. A mere 600m up from the lift-top gets you nearly 2200m of descent into Zermatt, through some of the loveliest scenery and a growing view of the Matterhorn. Definitely the cool way to arrive, and a chance to experience (in reverse) part of one of the ultimate ski tours – the classic Haute Route (see pages 62-67): though this usually goes from Chamonix to Zermatt, purists push through to Saas Fee, just to prove a point. 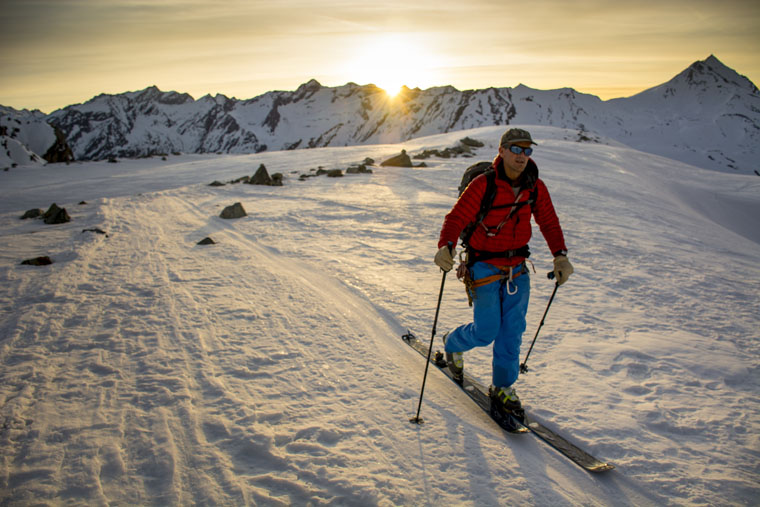 Or with half the climb but a similarly grand descent, to Täsch, one stop before Zermatt, the tour over the Allalinpass gives a lot of bang for your buck and could be the perfect warm-up for one of the toughest ski touring peaks above Saas Fee, the 4206m Alphubel. Thanks to the lift system, it’s ‘only’ a 700m climb but a tricky one in places. Your reward is 2300m of skiing back to town.

For overnighting in the Britannia hut

Saving the longest till last, the 4190m Strahlhorn merits overnighting in the Britannia hut. Not for nothing is the mountain known as the Stroll-horn, as it’s a very long walk, and a mostly gentle one if you could disregard the altitude. But you can’t so there’s no option but to get up before sunrise, knuckle under and plod your way across acres of snowy vastness before digging deep for the final 500m of climbing which becomes a) noticeably steep and b) a long way from breakfast.

But it’s worth it: the view south is not just across swathes of the Italian Alps but right over the plains. And of course, there’s a good ski back down. 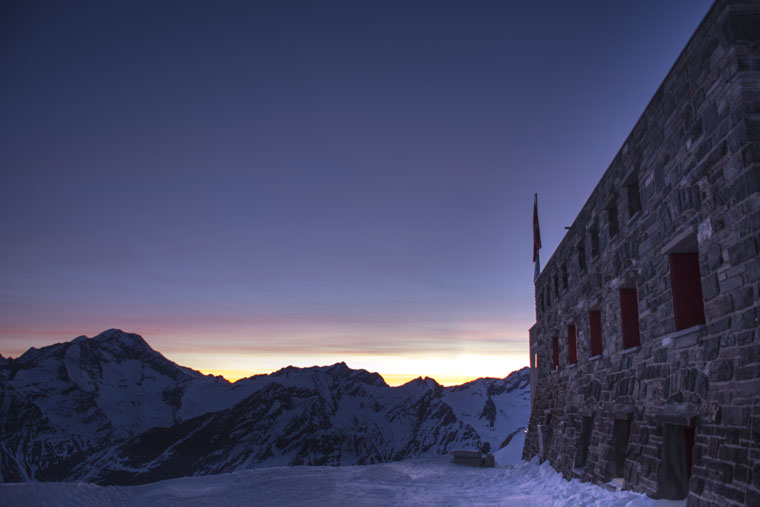 The hut has strong links with British alpinists who funded the first hut in 1912, in thanks for the hospitality they had received from the Swiss. | Penny Kendall

It’s basically back the way you came, heading along the ridge before launching down a slope with the occasional (usually) well-bridged crevasse; in a normal year, taking the standard line, there are no obvious holes at all. It soon mellows for a smooth run across the high-altitude snow-plain of the Allalin glacier, with just enough gradient for swooshing turns in anything but deep powder, eating up the hard-won climb in a matter of minutes.

The sting in the tail is a final skins-on and climb of a few metres back to the hut and a very well-earned drink and hearty rösti. But if you’re tackling this trip relatively early and cover is good, you can bypass the hut to ski the big descent to the Mattmark dam a good 800m below the hut.  FL