From 1915 to 1918, World War One came to the mountains, with the Italian Alpini battling Austrian and German forces. To mark the centenary, Jonny Richards picks up the trail in Cortina

The Great War tour is more realistic than I’d imagined. Francesco and I are dug in, taking pot shots at one another. Metaphorically at least. I want to do the tour in its entirety (taking in 80km of Dolomite scenery, and the ski areas of Cortina, Alta Badia, Arabba and Civetta) while he’s set on solely skiing the Marmolada, together with its lusty 12km-long La Bellunese run and good sized war museum.

I’m not sure how it came to this. The night before we discussed the route, doable in a day without a guide and using buses. We agreed to meet at 9am at Cinque Torri, from where you can see the trenches, and, well, get on it! 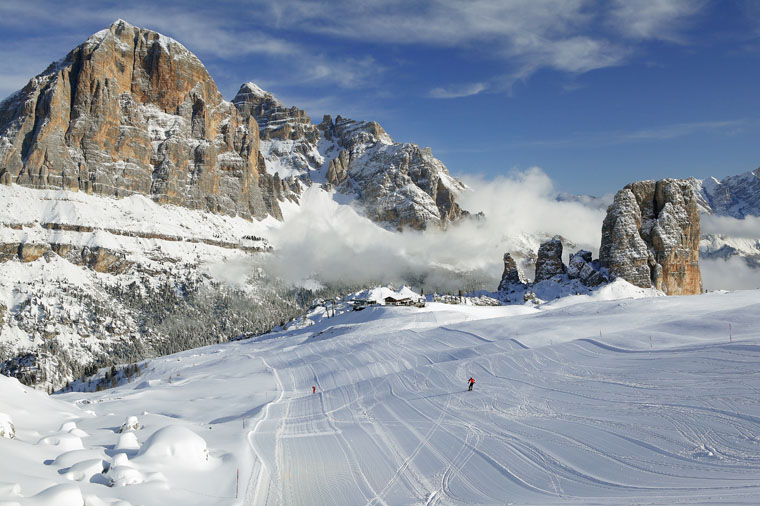 But the opposition is more battled hardened than me. And Francesco knows that one of the keys to getting the upper hand is to unbalance the enemy. He does this by turning up late, declaring it will take too long to drive 15km to Pescul (where I hoped to start our loop) and adding that his car is about to run out of petrol.

Now we’re making an hour-long circuit to Cortina to fill up. It does not take a genius to work out the reason we have no time to get to Pescul is because some Melvin (maybe not a real WW1 term) forgot to fill up his Fiat Panda.

As we reach the shadow of the enormous Lagazuoi, which looks wonderfully Where Eagles Dare, and was held by the Austrian Gebirgsjäger and German Alpine Corps, while the Italians dug up from below trying to blow them up, I snap. “Stop!” I shout, “Show me exactly where we are going.”

Now it’s Francesco’s turn to be knocked off his stride, as I’ve given it my best Your Country Needs You finger point and Lord Kitchener boom. I feel guilty as he has just given up smoking, plus he’s already nearly spun the car trying to hurry. But war is not for the faint hearted! So I press home my advantage. “We will see the whole tour apart from Pescul today, won’t we?”

“I do my best, but we maybe run out of time,” he says. “OK if I put R.E.M on the CD?” Hmm. Must work on my military boom. And with that we’re rattling the 20km or so cross-country to Arabba.

For anyone not keen on a day of light sparring with a nice if disorganised guide, the best way I suggest tackling the tour, with the fewest buses (three) is: Cortina, to Cinque Torri, to Lagazuoi, to San Cassiano, to Corvara, to Arabba, to Malga Ciapela, to Alleghe, to Pescul, to Fedare, and up a chair back to Cinque Torri. But now isn’t the time to nit pick. We have skiing to do, and massive guns to see!

We race up the cable car to Porta Vescovo, me snapping pictures of anything that says Grande Guerra, and fly down some nice, if busy, snow to the 2944m Serauta gondola and its Marmolada Great War museum.

There was fighting here for two years and I can’t quite believe the pictures on display of crazily exposed walkways, tunnel networks, and evidence of carved-out rock holes (barely big enough for one body) that men were expected to spend days in. 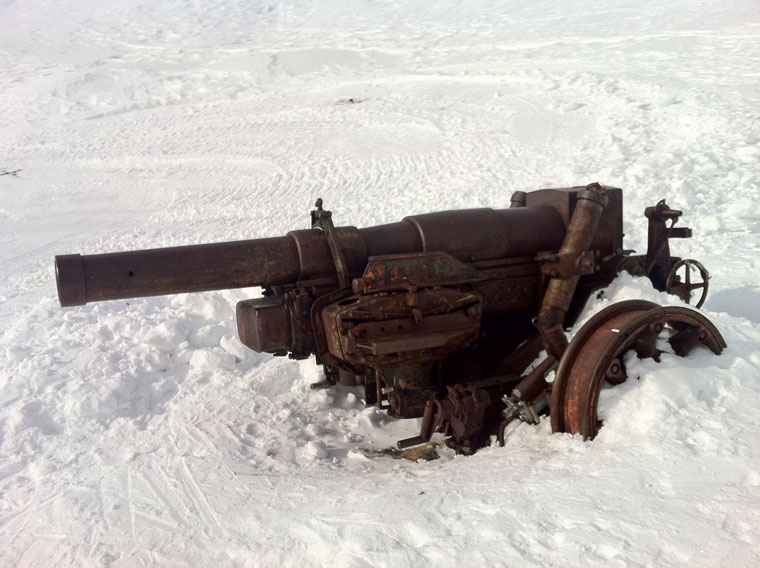 It must have been hell with the wind and snow whipping in, while opposition fighters tried to shoot you, or blow you to kingdom come with monster artillery like the cannon I see at Passo Padon.

As we make the frankly fantastic 12km descent to Malga Ciapela (no wonder Francesco was so keen to get here) I begin to feel like David Starkey on skis.

Back at Arabba we cross the road and river, ignore the snack vans (no better way to punish a tardy Italian that make him miss lunch) and surge back onto the Sella Ronda circuit before heading for La Vizza at 1760m.

The scars of war are all around, from cannons to machine gun posts to craters from explosives. But we’re not dawdling, with me keen to see as much as possible.

The aim is San Cassiano, then Corvara, then the car. As I skied the Super 8 the day before, which takes in Cinque Torri plus Lagazuoi’s machine gun post, officers’ shack and Armentarola descent to the Badia valley, I’ll have done everything on the tour bar a bit of Pescul and Civetta.

As we come to halt above Arabba’s kebab and pizza vans, both of us with big smiles, I feel fantastic. “The snow in Civetta’s bad and there’s not much to see,” says Francesco. Bless him. A few hours ago, I’d have wanted to whack him round the head with a ski pole. Instead I buy him a beer. FL

Base yourself at the very decent Hotel Panda in Cortina (seven nights’ b&b from €390). To get there fly from Manchester to Venice with Monarch (returns for less than £100) like Jonny, or Easyjet it from London, before taking the two-hour Cortina Express bus to resort (€54 return).

Jonny Richards was not paid for this feature. Instead a donation was made to the Poppy Appeal. We will remember them.