At the edge of the Arlberg lies the village of Warth – well linked to Lech, Zürs and St Anton yet master of its own sweeping north-facing slopes and home to cheaper lodgings and nosh. Oh, and it claims the greatest average annual snowfall in Europe, at an epic 10.5 metres…

10:35 Landing at Innsbruck is an exciting start to a trip – steep, curving descent, then mega-engine roar as we hurtle to a halt.

10:05 We’re bowling towards the Fernpass. Blue skies, fresh snow… and limited time, as this is a cheeky weekender. It’s hard not to bust the speed limit and my buddy, Abi, is kph monitor.

11:30 Picnic is scoffed and the villages are getting cuter as we approach our destination, Warth. Never heard of it? Me neither, until it linked up with Lech two years ago. Don’t know how to pronounce it? Me neither, but it’s ‘Varrt’. Actually everyone should have heard of it: Warth and neighbouring Schröcken claim Europe’s greatest snowfall, averaging 10.5m per season. Plus Warth was home to Father Müller, who was the first to ski from Warth to Lech and helped prompt a ski craze in the Arlberg for which we are truly thankful. The priest practised on his Norwegian-imported planks at night before using them by day in case people laughed at him. 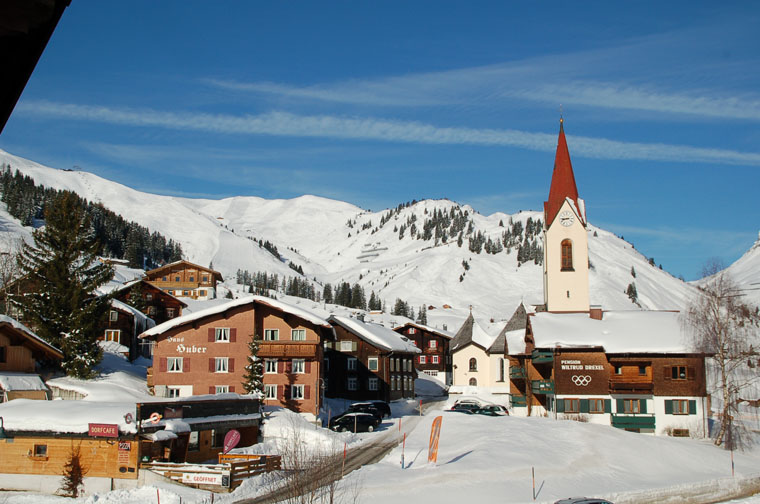 Pretty and powdery: the town of Warth | Yolanda Carslaw

12:25 We’re here! Warth is tiny: a few places to stay and eat plus essential shops, strung along a valley at just under 1500m. We’re near the Hochtannbergpass (1679m), beyond which is the Bregenzerwald, with dozens of ski hills far off British skiers’ radar.

12:27 We’re sprinting into Hotel Walserberg, ready to pull on our kit.

13:15 From the Steffisalp chair we’re surveying acres of north- and north-east facing freeride terrain. Last snow was yesterday and there hasn’t been much traffic. Most of Warth’s 70km of pistes range along the steepish north-facing side of the valley, with the Lech link round the corner beyond some gentler runs. The terrain- to-lift ratio looks amazing (few lifts; masses of terrain), and three main high-speed chairs rise from different points on the road (each with car park and restaurant).

13:35 It’s fluffy, it’s light… and that’s just the piste. We warm up down a short pitch to the Wartherhorn Express, which will take us to the Jägeralp Express, the middle main chair.

13:58 This Jägeralp is the business: sun on our faces on the way up; powdery sidecountry on the way down; trees towards the bottom. And barely a soul: perhaps they’re deterred by the Walserschuss, Warth’s second-steepest slope at 60%, on black w27 (w for Warth; the map is shared with Lech).

15:15 The Salober-Jet chair, which rises to Warth’s highest point at 2050m, beckons. But we’re having too much fun lapping the Jägeralp, and if we go we might not have time to stop at that hut we spotted earlier…

15:55 There’s still sun on the Punschhütte and we have glühwein and apfelstrudel outside gazing at Warth’s ‘home mountain’, the Biberkopf. Twenty-four hours ago, it was a drab March day in England… 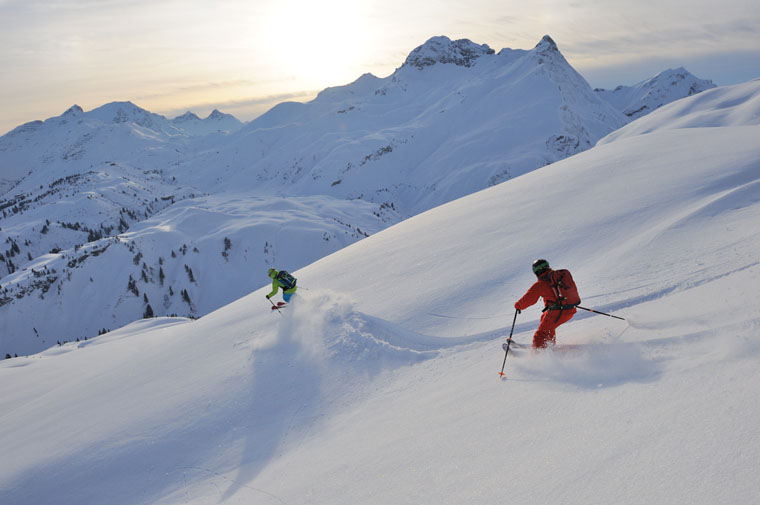 16:30 We’re hammering down and I can’t believe the snow quality for a last run. Northerly aspect + no crowds = awesome snow, although I imagine it might be sunless in deepest winter.

16:37 We find the direct way home by veering past a nursery slope and skating towards the church. Although Warth is strung out, it looks like you can ski to most lodgings. We halt opposite our hotel and next to what looked like a buzzing bar but turns out to be a party on a balcony. Never mind: we’ll postpone après-ski till after our off-piste day tomorrow.

09:00 Riding up, Silvia tells us her family runs Warth’s Lechtalerhof hotel, which they built in 1980 after ‘emigrating’ from Zürs. Her brother – also ex-Austrian team – is setting up a ski resort in Turkey, and her father raced too. When Silvia stopped racing she’d had 14 knee ops. Abi has had knee ops and they compare notes. Knee talk… yawn! Probably interesting if you’ve been unlucky enough to have surgery…

09:30 Silvia’s checking our powder capabilities while warming us up. She points out a party putting on skins. “They’re going on the Pfarrer Müller freeride tour,” she says. They’ll follow the tracks of the 19th-century priest to Lech and back.

10:05 We’re staying put to seek the stashes for which – locally, anyway – Warth is famed (on cue, a Zürs instructor appears with his expert group).

10:18 We’ve peeled off a ridge near the Jägeralp to find acres of powder. Cue yipps and hollers as we follow Silvia’s perfectly balanced form towards the trees. Though seemingly unfrequented and unmarked, this is a ski route called Wolfegg. 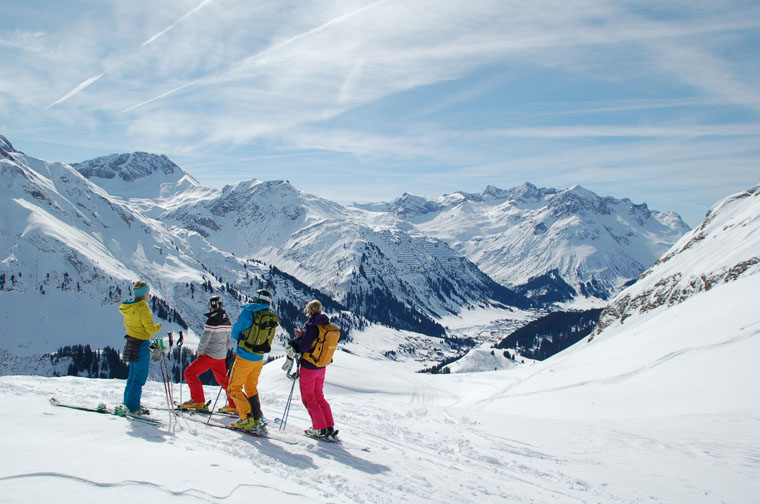 At the Wartherhornsattel, looking down on Lech | Yolanda Carslaw

10:23 Silvia pauses. Pointing at the road below, she says that in a good snow year you can continue to the ‘Galerie’ (an open-sided tunnel protecting the road from avalanches) and leap off to reach the road. “You throw your skis down, then it’s six or seven metres, maybe,” she says, smiling at the thought. Slightly relieved it’s not a good snow year.

10:31 Instead we traverse to Steffisalp on the Salzstrasse, where salt was once transported, and see a white hare streaking off ahead.

10:46 Silvia spots her sister, Martina. We decide to team up for a few runs and head for the Wartherhorn Express.

11:15 An ex-racer too, Martina, in classic bossy-older-sister style, takes charge. We traverse behind her and Silvia to the Wartherhornsattel, spacing out (the avi risk is three, but was recently four). From the saddle we overlook Lech, with Bürstegg and the route of the Pfarrer Müller tour in the foreground.

11:35 In the powder towards Warth Martina spots a cornice. She flies it, lands without a wobble and tears on down, slaloming round bushes in wild but brilliant style. Silvia skis round, wisely saving her knees; Abi makes a heroic effort and stays upright. I take photos…

11:44 We weave down a gulley that meets a snowy road. Abi arrives too fast and flies off the lip, stopped from head-firsting into the continuing gulley by a snowdrift. We grab an arm/leg each and hoist her back up.

11:55 With temperatures rising, Silvia is anxious about how the snowpack will be later, so we go all-out before lunch. We lap the Salober-Jet off-piste: beautiful rolling terrain.

13:50 We’ve nailed another Wolfegg before heading for Skihütte Hochalp, where Abi and I share a proper Austrian feed of germknödel (yeast dough dumpling, filled with spicy plum jam and served with custard), washed down with Almdudler (a grape and apple soda drink). Silvia and Martina are flabbergasted by our un-British choice.

14:40 Time for technique tips on the Wartherhorn chair. Silvia also points out a pinprick hole in the rock at the top of a couloir that leads to the ridge between Warth and Lech. Sometimes you can boot-pack up, pass through the hole and ski down the other side.

15:50 Silvia is excited about showing us something. It’s her ‘home run’, a meadow opposite her family’s hotel. It’s well worth the hype – lush, untracked powder at a flattering angle. A perfect end to a perfect day.

16:05 Not quite the end. We’re catching après-ski at Sporthotel Steffisalp, which hosts a band on Saturdays. The drink to be seen with is glühmost, like hot cider. It goes down pretty smoothly.

09:00 We set off on a visit to Lech, to try the link lift, though we suspect the snow is better here. 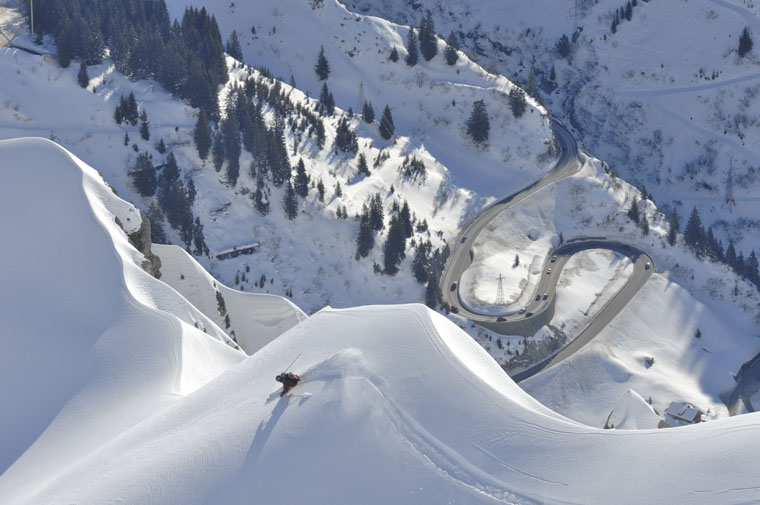 Lech: Easily accessed thanks to a new link | Sepp Mallaun

09:35 Three chairs and a run later we’re on the Auenfeldjet gondola. As we penetrate further into Lech’s area the furry-collar and diamanté-detail count rockets.

10:20 There’s a massive queue for the Steinmahder chair, the pistes are crowded and off-piste is tracked and hard. But the views towards Zürs are impressive and it’s great to have such easy access to this vast area – plenty of potential for big circuits.

11:00 Coffee at rustic-chic, super-busy Rud-Alpe just above Lech. As we wait for the bill we’re impatient to return to quieter Warth.

12:05 Phew! Back on ‘our’ side. Ticking off the sunny, gentle pistes close to the link lift, we spy a dual slalom. A perfect pre-lunch challenge!

12:15 We surely felt faster than we looked but never mind, because the Auenfelder Hütte is a schuss from the bottom. And it has my favourite – spinach dumplings.

13:47 After a wrong turn we’re on w9, skating past the romantic-looking Berggasthof Körbersee hotel. A cat-track leads down and it’s ever so pretty, though a contrast to the Wolfegg route. No matter that we don’t find powder – this is a peaceful run with great photo opps.

14:05 At the bottom in the sun there’s a cheap-and-cheerful drinks and sausage stall. Since we’ve just eaten, better find the bus stop.

14:20 On the bus are a group of knackered-looking Swedes with a mountain guide. They’ve come all the way from Sonnenkopf, using skins and lifts, and taking in much powder along the way (after a hard night, we suspect). The link lift will take them back: they look like they couldn’t climb another step. 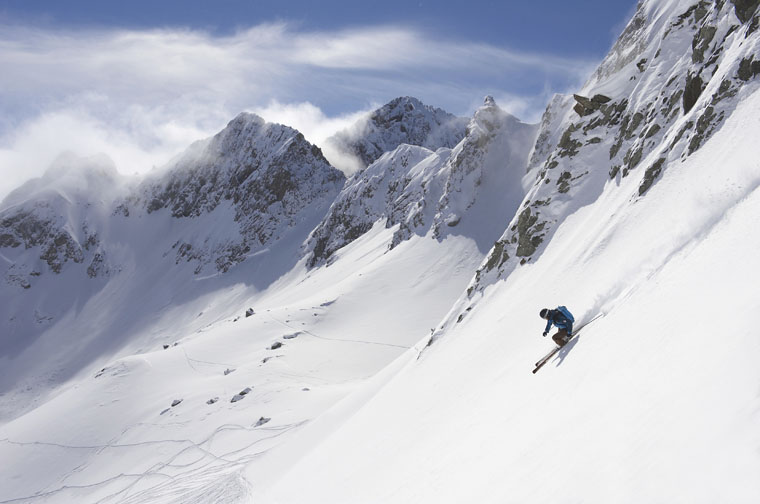 14:30 Time to lap a few favourites before meeting the Brenner sisters for a drink at the Lechtalerhof hotel bar.

16:15 They in their dirndls – on hotel duty now – and we in our ski gear toast an awesome weekend. We’re drinking the house speciality, Schlavendula: lavender syrup, Prosecco, soda, mint leaves and lime. As unknown as Warth itself, and just as satisfying.

Friedrichshafen airport (1hr 45 by car to Warth), Zurich (2hr 30) or Innsbruck (2hr 30) are most convenient. A stay in Warth can be easily built into an Arlberg ski safari. Fly into Innsbruck and take the train to St Anton, stay there or in St Christoph or Stuben then reach Warth via Zürs and Lech. You can ski back to St Anton from Warth in an afternoon.

Hotels in Warth offer exemplary Austrian standards at far cheaper prices than Lech, Zürs or St Anton. We stayed at Hotel Walserberg (walserberg.at), a friendly, 50-room place a few minutes’ walk from the lift (with a run almost to the door). Including the best breakfast buffet I’ve sampled (the family owns a bakery), plus a five-course dinner, rates are from €93 per person. Apartments and b&bs are also available. There’s an accommodation list at warth-schroecken.com

€51 per day for the Arlberg area pass, with 340km of slopes. A six-day pass is €252. A Warth-Schröcken-only pass (70km) is only a few Euros cheaper. To explore the Bregenzerwald resorts too, check out the ‘Three Valleys’ pass (€216 for six days in high season) giving access to Warth-Schröcken, 40 other Bregenzerwald hills, Montafon (Fall-Line’s resort of the year 2015/16, see FL135), the Großes Walsertal and the Tyrolean Lechtal (not the same as Lech). This season Warth-Schröcken is open till 10 April and the Arlberg area until 24 April.