For us winter lovers, few places can match Innsbruck – and the great value Ski Plus City Pass makes it all happen so easily

Can’t decide between a city break and a ski holiday? Head to the heart of Austria’s Tirol and you can have both! Surrounded by more than a dozen world-class ski resorts, Tirol’s capital city Innsbruck is the ultimate city and ski destination.

So you can split your trip between getting active on the slopes, or getting cultural in the city, with all the entertainment of a cosmopolitan city available on tap – and you can access all of it with just one ticket.

The Innsbruck Ski Plus City Pass (available from two to 21 days) covers 13 ski areas and 22 city attractions and sights, such as the Imperial Palace, the Bergisel Olympic Ski Jump and the Swarovski Crystal World, all accessible on free ski and sight-seeing buses. It’s great value – a six-day pass will set you back just €284.

Skiers of all abilities are catered for with a total of 300km of pistes and 50km of ski tours – here’s just a taster of what’s available:

Austria’s highest ski resort, Kühtai has guaranteed snow right through to mid-April and all the accommodation is ski-in/ski-out; attractions include the popular KPark with its Freestyle Area and SnowCross course along with a large Kid’s Park.

Hochoetz, located practically next door, has an extensive range of activities for families, such as the new WIDIs play and snowpark, along with more challenging skiing, including a new black run connecting the Balbach ski area with Ochsengarten.

Only 19km from Innsbruck is the Axamer Lizum, aka Innsbruck’s ‘White Roof’, with over 40km of slopes served by 10 lifts, including legendary Olympic runs and the newly designed Golden Roof Fun Park, along with Austria’s largest covered sun terrace.

The Muttereralm is a small family friendly ski area accessible from the villages of Mutters or Götzens that’s also extremely popular with ski mountaineers looking to really get away from it all in the high mountains.

Meanwhile, at the opposite end of the scale is the Nordkette Freeride Lounge, accessible from the city centre via the Hungerburg funicular and the Nordkettenbahnen cable car. Beginners can practice their first turns on the Seegrube, freestylers can show off their skills in the SkylinePark, while expert skiers can take on the Karrinne, Europe’s steepest ski slope with a gradient of 70%!

On the other side of the city is Patscherkofel, with a large beginner’s area and children’s playground, along with a challenging World Cup and Olympic downhill run and the 7km ‘Valley Run’ descending over 1000m. The ski slopes are floodlit every Tuesday and Thursday until 7pm; likewise, at the charming Rangger Köpfl ski area just 15 minutes from Innsbruck, the family friendly slopes are floodlit until 9:30pm on Tuesdays and Fridays.

Forty-five minutes’ drive from Innsbruck is Austria’s largest glacier skiing area on the Stubai Glacier, with snow-sure slopes rising up to 3200m and spectacular views of over one hundred 3000m peaks.

Closer to the city, at the entrance to the Stubaital Valley, are Schlick 2000 and Serlesbahnen Mieders, both offering great skiing for all levels of ability, with the easy blue slopes of Serlesbahnen Mieders being especially good for families and beginners.

Further along the Stubaital Valley, Elferbahnen Neustift has practically guaranteed snow and wide, open ski slopes, while over at Glungezer there are new, state-of-the-art facilities including the Tulfein Express, a super-modern combined gondola and chairlift, as well as a new panoramic toboggan run.

And finally, there’s the Bergeralm in the Wipptal Valley, where small is beautiful – expect excellent early season snow conditions on the resort’s 30km of perfectly groomed pistes, which are ideal for families and novices.

To make it as easy as possible, the free ski bus service takes visitors from Innsbruck to all the above ski areas and back. Just check with your hotel reception about the closest bus stop and departure times and you are ready to go.

Keen to take a break from the slopes? Days in the city can be spent strolling Innsbruck’s warren of medieval streets, pausing for a pastry in one of its traditional coffee shops and visiting some of its historical attractions.

With your Ski Plus City Pass 22 sights are included.

Highlights include the Golden Roof in the old town – a splendid alcove balcony that gets its name from the 2657 fire-gilded copper tiles that adorn the roof – and the 16th century Ambras Castle, picturesquely perched on a hill high above Innsbruck.

Meanwhile nature lovers should make a beeline for the Alpine Zoo, which provides a home for animals native to the mountains.

Or, if you still need your winter sports fix, check out the Bergisel Ski Jump above town and ask yourself ‘Would I dare?’ The 50m-high ski jump tower also features a panoramic restaurant and viewing platform.

The hop-on hop-off Sightseer bus is included in the Ski Plus City Pass, allowing you to enjoy these and many more attractions without a car, and the pass can be booked from two to 21 days until 8 May 2022.

Whether it’s skiing or sightseeing, nowhere offers more for winter lovers than Innsbruck, and the Ski Plus City Pass makes it all happen so easily.

Or, if you simply want to fit in a day’s skiing during a short trip to Innsbruck, check out the Ski Break Package, costing from €135 per person for two nights. It includes a one-day ski pass in one of three selected ski areas.

Check out the best holiday offers in the Innsbruck region at: innsbruck.info/package.

For us winter lovers, few places can match Innsbruck – and the great value Ski Plus City Pass makes it all happen so easily

Battle of the ski resorts: Innsbruck 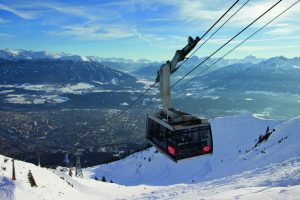 A local’s guide to Ischgl 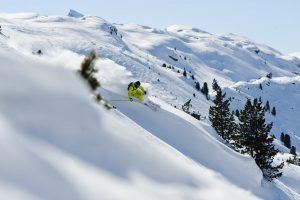 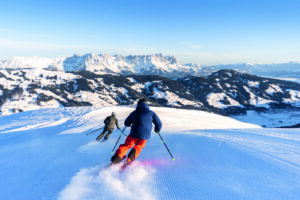