Innsbruck combines city life with access to huge amounts of skiing but how will it fare in our Battle of the Ski Resorts?

The airport is 15 minutes out of town, and Innsbruck resorts are amazingly well linked, but the airport’s connections to the UK as one of THE major ski hubs could be better. The 10-hour drive is straightforward, with just the Fern Pass to negotiate.

Sense of scale and epicness 7/10

Axamer Lizum and Schlick 2000 are home to the Dolomite-like Kalkkögel; Nordkette has the steepest run in Europe, and Stubai and Kühtai have big, bold mountains in every direction. Altogether, there’s a huge amount of terrain, but it’s hard to remember that when you’re just skiing one area at a time. 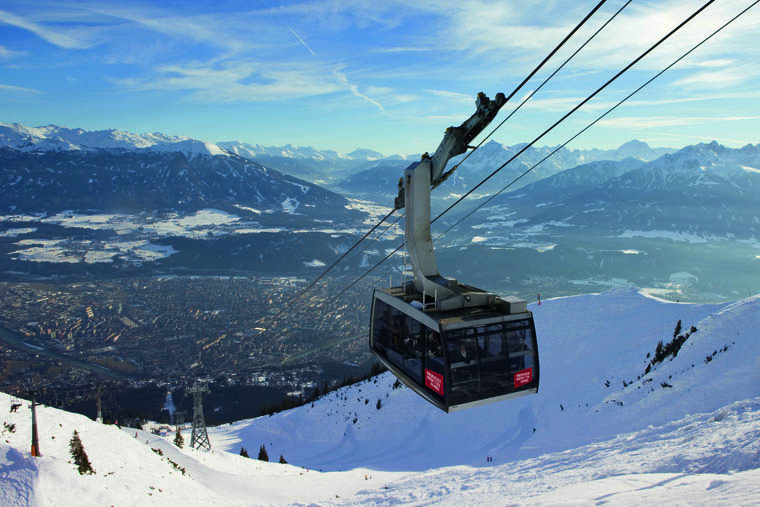 Variety and quality of the pistes 8/10

Muttereralm and Igls score big for beginners with their rolling blues; Schlick 2000, Glungezer and Stubai are intermediate playgrounds, while Axamer Lizum, Nordkette and Kühtai will challenge the boldest of riders. The park at Stubai draws in the world’s best, especially in the early season.

Innsbruck has dubbed itself ’Freeride City’ in its German-speaking promotions. Not surprising considering the reputation of Axamer Lizum, Kühtai, Nordkette and Stubai, with their steep and plentiful ski routes. I’ve found the off-piste at the quieter spots better though. The trees at Schlick hold powder for days, and hardly anyone touches Glungezer.

The 70% gradient of the Hafelekarrinne, off the top of the Nordkette, is worth picking over a few times, as are most of the runs at Axamer Lizum and Glungezer.

With the exception of Stubai and maybe Kühtai, this is about as cheap as Eurozone ski grub gets. Local classics like Kasespätzle (a cheesey pasta dish) and Tiroler Gröstl (hash) rarely cost more than €8 and can happily feed two. Glungezer’s Tulfein Alm is great value, especially if you’re partial to Knödel (dumplings).

This is not your typical ski town. There are a couple of umbrella bars at mountain bases, but Innsbruck itself does not get going until the early hours. But it’s a student city, so the crowd is young and the drinks are cheap. The best spots include Tribaun for craft beers from around the world, and Cococabana for karaoke.

Not only can you ski all nine ski areas on the OlympiaWorld lift pass, but it’s the best base for exploring the rest of the Tyrol. Both Kitzbühel and St Anton are easily reached by train, and the Zillertal is just an hour away. Touring is extensive and the Stubai glacier means you can don your t-shirt and ski well into summer, too.

Muttereralm and Igls are both first-rate family resorts with great facilities for kids. But lugging them up from Innsbruck in time for ski school every morning? Not ideal, though there are plenty of off-slope activities to make up for it.