Relax. If you can… That’s Ischgl’s official tagline, and they’ve got it spot on. For this is a resort that brings action on all fronts. You’ve probably heard the stories: drunk teutonic types propping up bars, or outright dancing on them. And, as with all stereotypes, they are based on truth.

Oh yes, there are many riotous nights awaiting you, with oompah bands, euro tunes and general après rowdiness at bars like Kuhstall and Niki’s Stadl. And then there’s the pole-dancing club… Well, strictly speaking it’s a “table dancing club”, complete with GoGos and an “upscale ambience”. Delightful.

Twice a year, the partying reaches an almost Glastonbury-style level, with the Top of the Mountain concert drawing in the likes of Elton John, The Killers and Robbie Williams. This winter – calm yourselves – James Blunt will take to the stage on the 29 November to celebrate the start of the season, which allows us to segue nicely onto our next point: Snow. With most of the skiing over 1,800m, Ischgl benefits from one of the longest seasons in Austria, lasting until early May. Plus, with most of the powder hunters scrambling for lines in St Anton, on the other side of the Verwall Alps, here you can bank on finding stashes days after a snowfall.

It’s big, too. Not exactly Three Valleys big, but with 250km in Ischgl (including cross-border links to Samnaun in Switzerland), plus Galtür and Kappl down the road, there’s plenty to sink your skis in to. This year Ischgl have invested €40 million into their lift system, replacing the 24-year-old Pardatschgratbahn with the longest tri-cable gondala in the world, and last season they opened the Piz Val Gronda cable car, opening up swathes of freeride territory.

And that’s what we like best about Ischgl – the après is there should you want it, but underneath the party town facade, it’s a skier’s resort at heart. Just ask local boy Hannes Walser.

Stick to the cruisey blues around Idalp, in the centre of our ski area. There are usually untouched stashes to dip into and find your powder legs.

TO FIND FRESHIES DAYS AFTER A STORM

Head to the new Piz Val Gronda cable car, which opened last season. It’s a dedicated freeride area with runs of 700 vertical metres and around 700 hectares of skiable terrain, so there’s nearly always fresh tracks to be found.

This is the best thing about Ischgl; you can take advantage of the brilliant lifts and let them do the hard work, then finish off with a short bootpack or tour to the top. Then enjoy the looong and lonesome descent back into the valley. I won’t go into specifics, because the best way to find the good – and safe – spots is to hire a local guide. Try schneesport-akademie.at or ischgl-guides.com for recommendations.

That’s easy! Being able to ski and snowboard five months every winter. Our season starts at the end of November and carries on until the first week of May, so I can ride nearly half the year! It’s good for visitors as well, because you can feel confident there will be good snow even in the low season.

WHAT’S THE BIGGEST MISCONCEPTION ABOUT ISCHGL

That is all about the après ski. We are famous for it here, and we do have a really impressive nightlife, which I’m very grateful for. But in reality, the main thing that draws people here is the ski area. It’s much more impressive than any of the clubs or bars!

There are so many options, but I’d recommend heading to Paznauner Taja or Vider Alp for both Tyrolean food and general flair. The local cheeses and sauerkraut at Paznauner are not to be missed, and the Vider Alp puts on spectacular grills.

FOR DINNER IN TOWN

We’ve got a good selection of Italian restaurants, my favourite being La Nona, next to the church. The pizza is the standout dish, but meat dishes like Wienerschnitzel are good as well. I also like Allegra – it’s an American-style bar with great burgers, music and drinks. Best of all, they have a pasta “happy hour” in the late afternoon, which is perfect after a hard day’s shredding.

FOR AN APRES SKI TIPPLE

We have so many bars and clubs. There’s everything from an Ice Bar in Hotel Madlein to the rustic Kuhstall. If you like live DJs, try Feuer & Eis and for cocktails it’s got to be Guxa, in Hotel YSCLA. There is only one way to find out which you prefer – go and check them out! FL 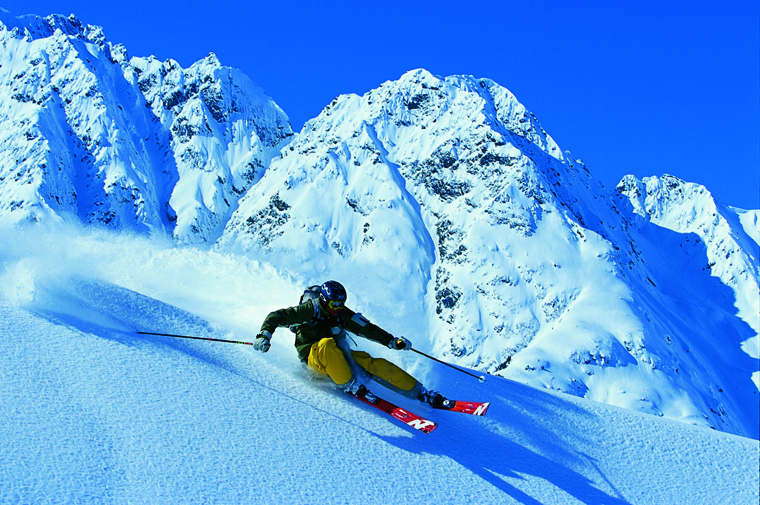