It turns out, after a lifetime of being incorrectly assembled in the first place and then smacking the long suffering joints around, I need two new hips. What I don’t particularly want is a new career – I like Fall-Line, and I like being part of it. Prognosis for skiing after hip replacements differs – the first surgeon I saw suggested I’d be better moving to a different activity sport, for example whist. Now, exhilerating as that may be around suburban sherry tables, with the added frisson of strip-whist if your leg bends far enough, I felt it would be sensible to get a second opinion… from a surgeon who just happened to like skiing.

After showing him the magazine, he flicked thoughtfully through it and sucked his teeth. “I don’t think we’ll get you doing that”, he apologised. I looked dejectedly at him until I realised he was on the WTF spread with Cody Townsend shooting down that couloir. Once we’d agreed that a) it wasn’t me in the picture and b) I promised not to do anything like that again [??? -Ed] we had a plan. Apparently, all going well, he reckoned I could ski three months after a total hip replacement. I needed two, which meant both had to go well and the first would need to be booked in ASAP. 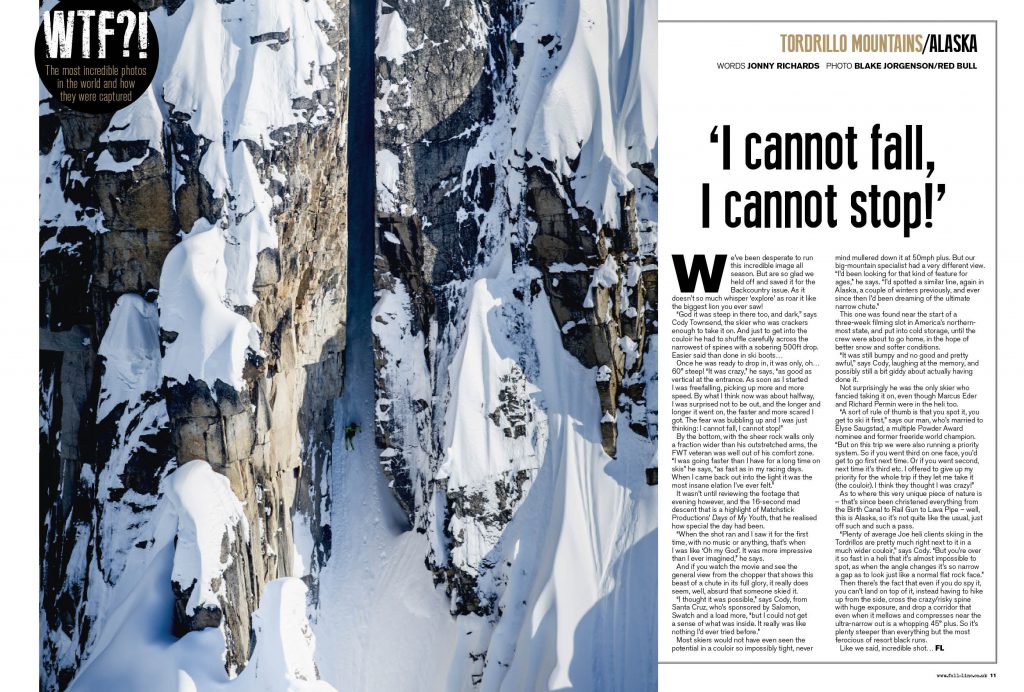 Recreating Cody Townsend’s line through this narrow chute is not okay, according to Dickie’s surgeon

The first op is now done: there’s an option for local anaesthetic which I took, and it was an interesting if disconcerting experience:

“I think I can still feel someone stroking my leg – are you sure it’s working?”.

To which the answer is yes, because the top of my femur has just been sawn off… Hospital was a bit of a blur and rather enjoyably institutionalised – how nice to be so thoroughly checked on a regular basis, and how alarming to be lobbed out to the tender mercies of one’s family who don’t have blood test facilities, special drugs to make everything better or, as it turned out, the knowledge to put on a wheelchair brake… 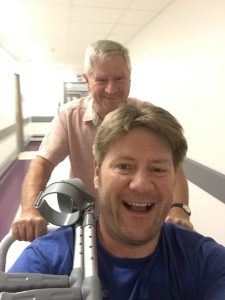 Fincher Senior on way to push Dickie under a taxi. How we laughed!

My father kindly scooped me up on home-delivery day because my wife had thoughtlessly broken her ankle a few weeks before and couldn’t drive. At least we have plenty of crutches in the house. Anyhow, he parked me on the hospital forecourt and went to get the car.

It suddenly became clear that his attempt to put the brake on the chair wasn’t as thorough as it could have been, as I rolled down the ramp into the road. With my good leg wedged onto the footrest under my bag, and my loosely attached leg flailing at the ground to stop, I squawked royally with each impact as the recently reattached leg skidded uselessly along the ground. Ah well, at least I was in the right place to be put back together, again, as a taxi swerved around me.

I admire a driver who doesn’t ride the meter for anyone’s sake and would have tried to get his number for upcoming station transfers, but was distracted by the upcoming ambulance – a class of vehicle with a better known history of getting a rattle on. Maybe they were already full; maybe they realised that I was about to spring an almost biblical miracle and suddenly find my feet. Anyhow, I leapt clear with all the power available – think ‘chihuahua’ rather than ‘panther’ – and avoided the humiliation of being readmitted before the ink had dried on the discharge papers.

And so, I’m now two weeks back after hospital. Everyone I’d spoken to had said the first couple of weeks were tough because of the lack of sleep, mainly because either painkillers run out at the same point you need a pee, you can’t sleep on your side or your temperature control goes bananas. I ticked all the boxes, and the lack of sleep chews away until you’re in tatters. But… It’s getting better. Doing the bizarre micro-exercises has gone from strangely impossible to “is that leg actually moving in this direction – I haven’t seen it do that for two years”. So that’s good. Three weeks to the surgeon’s verdict on when I can have the next op…

To find out the continuing tale of the hip: