We’re suckers for trawling old Fall-Line Mags – time and time again, we come across features, that whilst the prices and exact products may be a bit dated, the story still resonates – Our Road Trip series covers some epic Fall-Line adventures…

Cometh the time, cometh the van.

If you’re heading a long way with a lot of people and stuff, the equation stacks in favour of van-based vehicles. Add in the increasing comfort inherent with the latest generation of plumber’s favourites and an awful lot of families are starting to consider the Caravelle and other vanny sorts.

We used this one to head overseas and on a long UK trip. Pretty well every time we opened the doors dozens of people flocked inside, with a selection of family members, skiers and various hangers on heading off in all sorts of directions. It was a case of:

“have Caravelle, will travel”

So we went to Scotland as a family and Italy on the ski test.

What seems to strike most people with this large, van-like vehicle, particularly if they’re about to drive it and have come from a normal car, is that it’s quite large and van like. For the first few corners, and when wriggling through town, you’re always aware of the size. Then you remember that a million white van men have taken the same route at 90mph and realise that it’s not impossible.

Inside is where the space counts, and the interior can be shuffled around quite significantly. It is biased towards commercial operators so the seat-moving levers are hefty and need a bit of technique to make everything go where you want. This version had two seats behind the front seats which could turn around, but it also had a table which needed to be moved out of the way before that would happen, so the whole process is a bit of a Rubik’s Cube.

This is the long wheelbase version, so it’s bigger again than a regular van, but for the ski trip every inch was used with five people plus gear inside. To make best use you’d probably fit a roofbox for regular trips, as well as cycle racks and other accessories. That way the inside stays clean and relaxing, and doesn’t get scuffed up. After all, you’re paying a huge premium over a standard van to get decent back seats and good sound insulation, so it’s worth keeping it in good condition.

The best way to trash any car is to fill it with children, but boy do they do love travelling by Caravelle. The seats are high so they can see out, and the space works to let them play without fighting. It’s almost relaxing.

Driving it is easy because the controls are light, so even first-timers had no issues with this aspect. It’s fairly comfortable, though there wasn’t any lumbar support in the seats on this model which limited driving to two hours before needing a stretch. We had the 140bhp engine – there are more and less powerful versions, but this was fine including scrabbling ovCer mountain passes, loaded up. It was also fitted with winter tyres so we made it without having to fit chains, which was a relief. Given that it’s a very long, rather unwieldy vehicle it coped surprisingly well, though we drove it more carefully than a car given the same conditions.

On the Italy trip it did around 29mpg including a couple of mountain passes, and up to Scotland it did 33mpg, so given the loads, the general comfort and the fact that both trips would have otherwise taken two cars, it worked well. The main gripe we have is the price – a base model VW van with the same engine is about £22,000, whereas this is around £36,000 as tested. 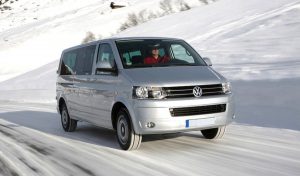 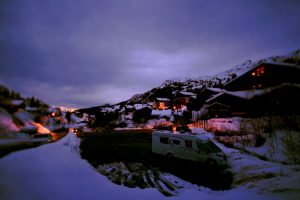 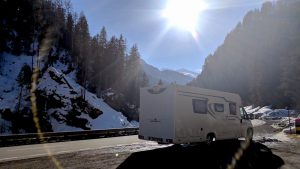 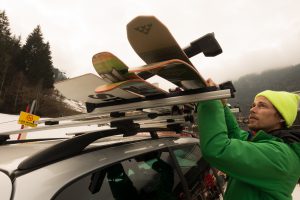