We are standing at less than 1000m, it’s March and the snow is good. We are going to travel 1300m up, and nearly 3km along, in a little under 12 minutes, a surprisingly short period of time for which we will soon be grateful.

The lift station at Kronplatz’s base sits next to several bars, which increase in enthusiasm as the day lengthens, delivering first enlivening coffee, then excellent pizza, then perhaps a refreshing beer. Knowing we have this and more to look forward to, let’s sup up that macchiato and go for a ski.

The early-doors queue, even at half-term, is dispensed within minutes. The lift is large and child-friendly, with lots of central ski stowage. No-one stands. We are very quickly into the trees and note how dense they are, and how little of the runs we can see. Some bold souls have bounced down the under-lift line, but it’s a messy affair with a wire-roped footpath to add confusion to tree trunks and sudden gullies.

The mid-station is quite a long way above the middle and feeds skier’s right to part-way down Hernegg, one of the resort’s three definitive black runs (two of which run off Kronplatz 1). 25% of Kronplatz’s runs by length are black, and I’d class them as legitimately steep and challenging, rather than a sap to glorifying the piste map. We can see glimpses of Sylvester, the other big black piste, over to our right. Because the view is directly across there is a pitch that looks remarkably steep, covered in sprawling ants and is, come the afternoon, alarmingly/perfectly (depending on your knees) mogully.

We pop out above the tree line at about 1800m and the last 450m are over a wide, smooth moonscape. Measuring this resort’s in kilometres is misleading. The odd thing about Kronplatz is that the entire top of the mountain through 270 degrees is piste-bashed for nearly a kilometre, meaning the ‘runs’ are essentially one 5km-wide piste with the arbitrary ends picked out by the handily scattered lifts. It can make navigation a bit tricky for the first few runs because everywhere is… white.

Time for a warm up. Drop under the lift on either side and stay skier’s left. We’re now on the 5km Sylvester, which has several feeder routes. You can ski the area into the mid-station as a red piste, dodging some black pitches, and bring progressing skiers along for the ride, but there are still a few steep pitches to keep it real. It’s mostly very wide, even on the paths, which is the same for the whole resort and makes it a fine place to adapt to steep slopes because there’s always space for everyone. We shall head far left and see if the watersplash is in place, though it’s unlikely before April. (Have a look at our YouTube channel to see it in action)

The piste is in great condition this early, and speeds stay high along the path to the next series of pitches. Every run off the top has this series of layers, though the runs are long enough not to have large clusters of concerned skiers in over their comfort angle. Scheizen! What was that? Ah, a cluster of very unflustered instructors doing the same thing as us, but faster. Let’s tuck in behind them and get some lines.

They ski it like a GS course, using the terrain to adjust speed and set up their corner entry. Our legs start burning down the snaking S-pitch, which we twig is the one visible from the lift. Let’s be a stylish ant, and to hell with the burn. It can’t be much further, surely? The instructors’ ingrained knowledge edges them relentlessly ahead and suddenly they plummet out of sight.

There aren’t many 5km black pistes to compare this with and the run keeps on giving. Were we to our right on Hernegg, this would be where a startlingly steep inside line appears before a wide path for the last kilometre and a half. That final pitch comes much closer to the end on Sylvester and pings us straight to the right of the lower learner slopes and a small jib park. That final cruise delivers a well-needed warm down. We are back at less than 1000m altitude, and the snow is just fine.

Time to pop a few vents and pick a drink stop to aim for before recycling ourselves. Three runs an hour? Just about. 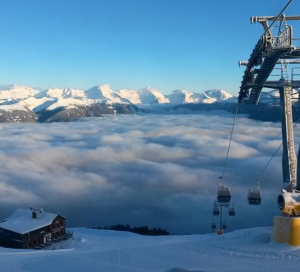 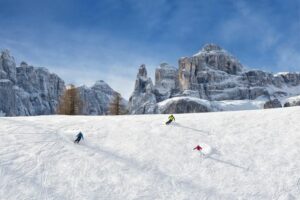 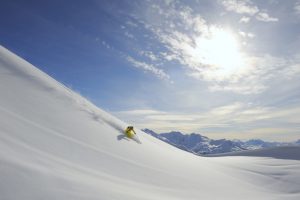