It’s one of the best kept secrets in the Alps, with the powder and terrain to compete with its big-name neighbours, but without the crowds. 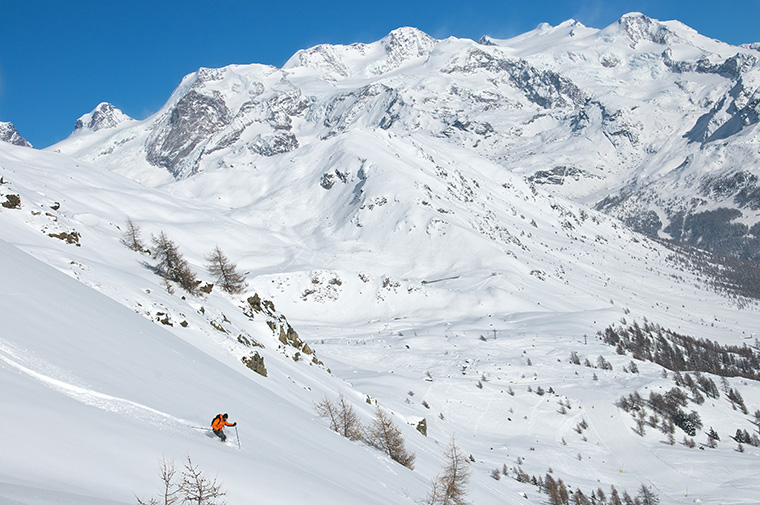 The place is rife with powder pockets \ Marco Spataro

We’ve heard whisperings of a magical place for many a year now. A ski area that offers high-mountain touring to rival Chamonix, snowfall to rival the Arlberg and food to rival, well just about anywhere else in Italy. Yes, we’re talking about Monterosa, a ski area in the Aosta Valley that offers up endless juicy freeride lines and backcountry playparks.

Named after the Monte Rosa massif, which is the second-highest mountain in the Alps by the way, the area is surrounded by classic resorts – Saas-Fee, Zermatt and Cervinia, to name but a few. But somehow its three villages, Champoluc, Gressoney and Alagna, have remained firmly off the radar, cast into the shadows by their famous neighbours. We’re not sure why. The pistes are extensive, sprawling across three valleys and connected by 75km of thrilling descents. Combine that with the unconnected areas of Brusson, Antagnod and Bieltschoke – which offer quiet, tree-lined and bad-weather friendly alternatives – and you’re looking at 170km of groomed, varied terrain.

But what gets snow-hungry tongues wagging about this overlooked gem is the off-piste action. From the forests of Frachey to the shady bowls behind Alagna, the place is rife with powder pockets just waiting for freeriders and tourers to claim them. But, now, here’s the really great thing: nobody has. While everyone’s busying themselves rappelling off the Aigulle du Midi in Chamonix, or chasing powder over the border in Zermatt, Monterosa remains more or less empty, especially mid-week.

And it’s not just the trackless couloirs that show signs of desertion, each of the villages possess a ‘once upon a time’ feel. Good if you’re here purely for the mountains, not so good for anyone looking to party as hard as they ski. Stick to Ischgl, if that’s what you’re after. Or, you could settle for Hotel Castor’s infamous music night, run by our local, Herman Buchan.

Music-maestro and wine-buff Herman Buchan quit London life 18 years ago and now runs a hotel in Champoluc with his wife, three kids and two dogs. 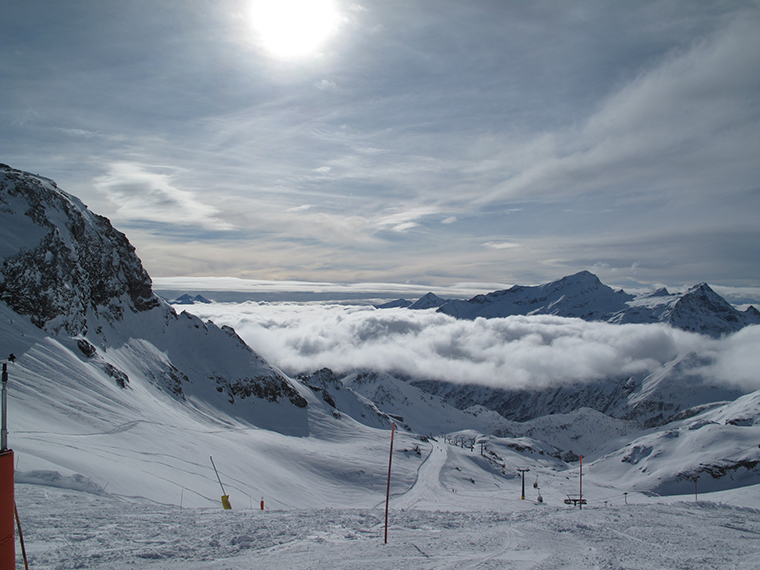 The pistes are extensive, sprawling across three valleys.

Best run for a warm up

Follow the early morning sunshine. There’s a long, cockle-warming red run that takes you from Sarezza (2702m) back down to Champoluc. On the other side of the valley is Antagnod (connected by ski bus), which gets the best morning light and is typically quieter. Though there is the women’s World Cup downhill run there if you’re feeling brave.

The forests in Frachey are always fun in powder, or in the Gressoney valley there’s a fantastic area between the pines around Jolanda. Antagnod can be surprisingly good as not so many experts head there, plus the low pitches means it’s one of the safer areas. We usually get a local guide, Stefano Percino, to take us out. He has a nose for the best powder even when it’s a little scarce.

Where to start? There are fantastic options here for all levels. After 16 years living here I still ski something new every winter. One of my favourite itineraries involves a hike or skin up from Col Bettaforca to Bettaforca Alta. This gives access to a long ski down to Pian di Verra, past an icy-blue lake before hitting the village of St Jacques at the head of the Champoluc valley, where I usually treat myself to a well-earned mulled wine and Nutella crêpe at the Fior di Roccia restaurant.

Another backcountry must-do is the Lost Valley glacier – a traverse from the top Indren lift station followed by a skin to the crest. From there, it’s a 100m rappel down a steep, narrow canyon to the glacier.

Going heli-skiing. The local guides  can take you up to Col de Lys or Col de Felic, with a fantastic descent over the glaciers of Monterosa’s north side down to Furi in Switzerland. Then it’s back home via the lifts of Cervinia and a ski down the Cime Bianche, which takes you back to the Champoluc valley. A long but unforgettable day! 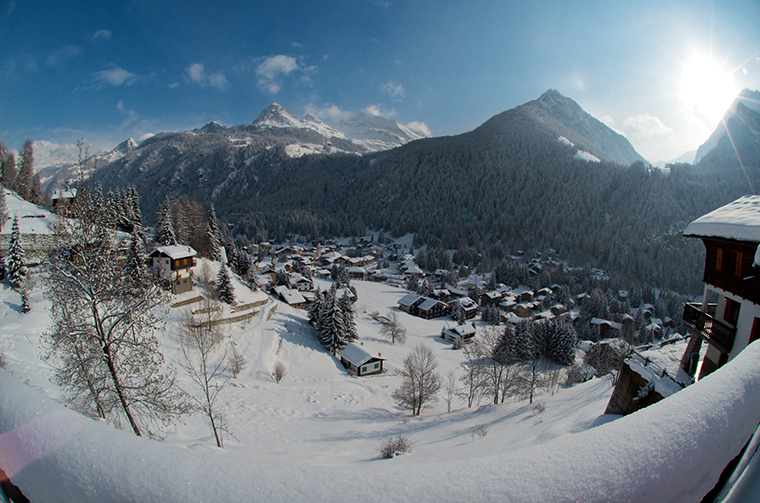 Itself. It’s still undiscovered and relatively quiet, but great value for money. There are three spectacular valleys, suitable for all levels with fantastic off-piste that could challenge even the hardiest of riders, an uncomparible Alpine panorama and an ‘untouched’ feel about them.

Over at Frachey try La Mandria, noted for its local specialities. I’d opt for a platter of local cured meats and cheese to start and the Zuppa Valpellinentze (cabbage soup) to follow, washed down with a local Enfer (which means ‘Inferno’) red wine.

For dinner in town

Le Petit Coq (+39 0125 307 997) is a great restaurant located between Champoluc and Frachey, with a romantic, rustic style to it. It has mountain specialities including raclette, pierrade, fondue and bourgignon, as well as excellent local wines. In Antagnod, Il Cadran Solaire (+39 0125 304 051) has a cosy atmosphere – do leave room for dessert.

Bruno’s! It’s just to right of the run down to Champoluc. For live music and a relaxed mulled wine try Mauro, close to the lift station, or soak up the last sun of the day over the road on La Bistro’s terrace. If you’re staying in Gressoney, there’s the famous – and lively – Castor Lounge.

Golosone (‘the Golly’) is known for its great beer, cocktails and atmosphere, or for a wilder night head to Pachamma, the local disco, Don’t miss Music Night every Tuesday at Hotel Castor, starting at 9pm with yours truly on the keyboard, a guitar and a base.