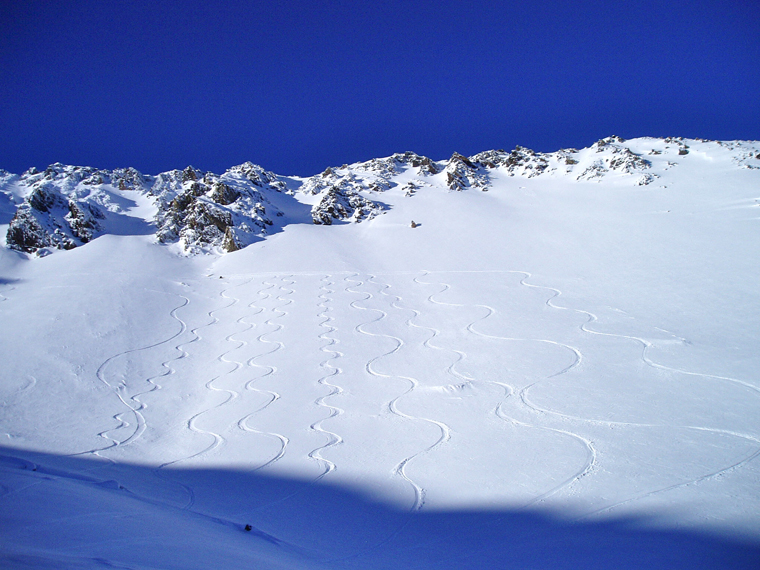 Below my ski tips, a narrow chute edged with spiky greywacke rock sheered away at a vertiginous angle. I shivered – it was August, mid-winter and a south-facing gully, so there was little sun.

Everything is strangely topsy-turvy in the Southern Hemisphere.

Even more surreal – I was on a mountainside in the middle of nowhere, skiing lift-serviced backcountry. I began to wonder if I had taken a wrong turn through a wardrobe, and then a green parrot swooped in. It stamped about and cocked a flirtatious, beady eye at me. I stepped back, prepared for its mischief-making. Known as the ‘clowns of the mountains’, Keas are the world’s only alpine parrots. They like to charm unsuspecting visitors with their cheeky strutting, then steal whatever their deft, hooked beaks can grab.

While the parrot and I had our stand-off, a couple of skiers scooted past, nutcrackers swinging jauntily between their thighs (I’ll explain that later) and dropped in. It sounded icy. They looked like pinballs in a machine, pulling off each desperate turn just before they crunched rock. A whoop echoed up from the bottom.

Just an average line at Craigieburn Valley. If you’ve heard of New Zealand’s little-known ‘club ski fields’, you’ll know Craigieburn is the legendary one. It’s like the heli-skiing in ski films, only you can get a rope-tow up.

On the map, a couple of Craigieburn’s runs are labelled ‘more difficult’. Most are ‘expert’ or ‘tricky’ and a handful are insouciantly ‘suicidal’. Back in the day, Craigieburn was second home to the mohicaned pioneer of freeskiing, Glen Plake. He loved it here. 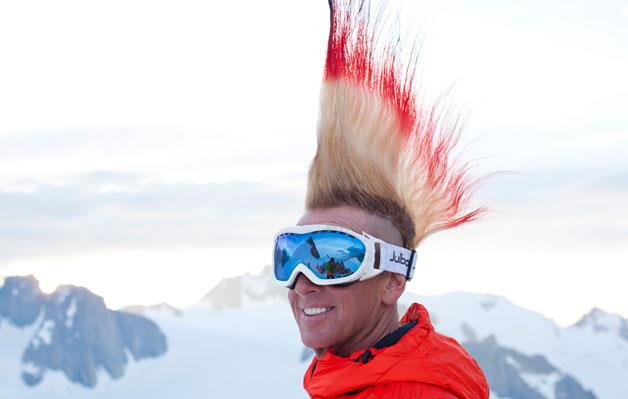 These were all scary thoughts but, for now, I was happily distracted by the view. Snow-capped Southern Alps stacked behind each other in every direction. The bluebird day brought the nearest peaks into vivid focus. Scree-slopes tumbled down their mountainsides into dense beech forests. Below the tree-line, veins of water on the valley floor would eventually merge to form the turquoise waters of Rakaia Gorge. In the distance we could see the Grey Range and New Zealand’s highest peak, Mount Cook (3754m). I was a tiny human speck on a mountain. My hand crept for my avalanche transceiver.

Seeing my nervous face, Sloppy, my guide, laughed. “Let’s save that line for later, when it’s had some sun, and warmed up.” We schussed further along the ridge. You can reach all the famous drops of Middle Basin, from wide open bowls to steep natural halfpipes, by traversing from the top ski tow. The terrain is rarely tracked out as there’s so much of it and, even if it is, a 30-minute hike further along the ridge finds similar lines at Castle and North Peak.

We picked an interesting gully, 35° and filled with wind-blown powder. The chalky, naturally-groomed slope skied fast. Emerging breathless on the wide main face, we raced all the way to the creek, stepped over and continued down to the access road, from where it’s a 10-minute hike back to the access tow.

I was having the time of my life exploring New Zealand’s club ski fields. Imagine staying in a wooden lodge perched on a remote mountainside surrounded by basic ski tows, which give you rides up to surrounding ridges, gullies and powder bowls. A bit of hiking or skinning gives access to even more wild and untracked terrain. 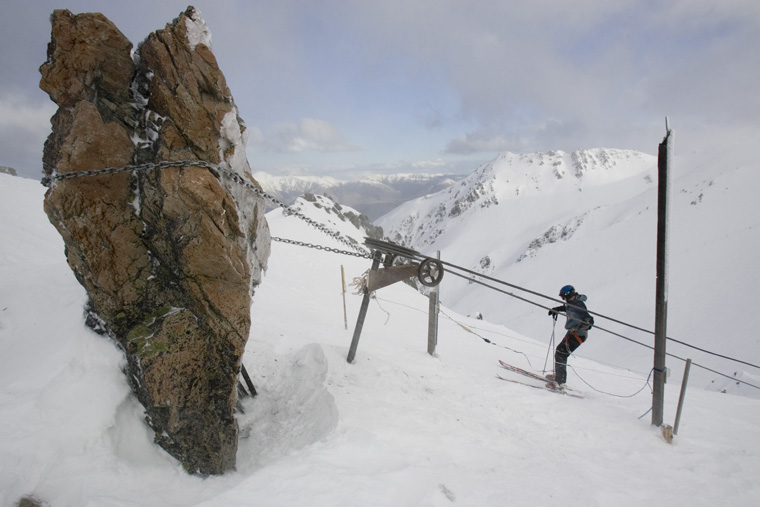 In the evening you share tales of adventure, hot dinners and drinks with a handful of like-minded guests, before slipping into your cosy, wood-panelled room. Sounds expensive? Around $40 (£20) per night; even cheaper for a week package.

There are around 15 club ski fields in New Zealand; most lie on the South Island. Six of the best ones, known as the Selwyn Six, cluster near each other in the Southern Alps. Each has its own character. From Craigieburn we hiked over a ridge to Broken River, the neighbouring club’s patch. This field has a mellow, family atmosphere with easier angles and a terrain park.

Over lunch at Broken River’s club hut I chatted to some founding members, now comfortably grey and refusing to own their age. Back in the 1930s, they explained, groups of winter sports enthusiasts had explored the Southern Alps for good places to ski. Then they’d pooled their skills as builders, plumbers, farmers; hiked up mountains with poles slung from shoulder to shoulder carrying tractor generators, timber and rope. They’d built the club lodges, ski tows: everything. Now their grandchildren ski here.

Back in the day, Dick told me, they used to hike up and potter along ridges, visiting other clubs’ ski fields, just as we were doing now. “Craigieburn Club was men only back then,” cut in Margaret.

“They told us gels get yourselves over that hill, there’s a perfectly good little basin over there you can have… That’s Conversation Knob”, she added, pointing.

“We’d often sit and chat there. And that’s Nervous Knob up there. We used to race down that narrow gully on our 215cm beech skis with leather boots tied on. If you broke anything back then it was usually your leg. We were quite nervous waiting our turn.”

Still mainly run by small clubs on a non-profit basis, the ski fields retain their adventurous soul and community spirit. They extend a relaxed Kiwi welcome to visitors, as long as you can master ‘the nutcracker’. These look like over-sized household nutcrackers, and they provide excellent crowd control. You use them to grasp the ski-tow rope. Time after time I flipped the steel arm, the rope spat me off and I slid back towards clanking cogs and a tractor-powered generator whirring in a wooden shack.

“Relax,” said Sloppy. “Look around you, there’s no rush. Who’s gonna steal your line?” And I was gone, onto stage two of my initiation ceremony: desperately trying to keep the handles together and my shoulders in their sockets as I clanked up towards the ridgeline.

Against the setting sun, Sloppy was a glowing silhouette atop Hamilton’s Peak (1922m). Looking down, I could just spot the Whakamaru Day Lodge, camouflaged by rocks on Kea Ridge. Further below lay the thin ribbon of the mountain access track, where there were maybe five cars parked.

After watching alpenglow spread across the mountain-faces, we broke the silence with the click of bindings. After a long descent down the wide face, we disappeared into the dusky gloom, along a track winding through the tree-line to Craigieburn’s Koroheke Lodge, just in time for happy hour at the bar.

The ski season runs from June to October.

Day lift passes cost $75. Varying week rates including accommodation are available. An unlimited season pass accessing up to 13 NZ ski areas is available from chillout.co.nz and costs around $1375.

More on Skiing in New Zealand: