Until last spring Graham Bell only skinned up in exchange for a decent downhill reward. But then a request arrived from Blue Peter…

Abfahrer. Descendeur. Downhiller. The word has only one meaning in sport: someone who races downhill on skis fast. It’s also what I called myself for 16 seasons of ski racing on the World Cup tour. So could a dyed-in-the-wool downhiller like myself explain the booming popularity of a sport where skinning up is as important as skiing down?

Ski touring has seen a massive growth in recent years, and ski mountaineering or skimo, the competitive side of the sport, is also on the up. In April 2014 the International Olympic Committee granted the International Ski Mountaineering Federation (ISMF) preliminary status as an Olympic discipline. It’s early days but skimo could make its debut as early as the 2022 Games in either Beijing or Almaty. In the UK, skimo is supported by the British Mountaineering Council (BMC), with a competition series organised in Scotland by Skimo Scotland.

Janine Frost organises the British Team through the BMC and is our highest ranked UK women’s competitor. She says that skimo is attracting athletes from sports such as triathlon and running who are looking for a winter challenge and more keen on the up than the down, and thinks the only way for Britain to challenge for the podium is to increase the skiing level of our young athletes. The ISMF are running an international junior training camp this season in Austria and have allocated three places for youngsters from the UK, which should help with that.

Up until last season my own ski touring experience was confined to skinning up with fat powder skis and heavy touring bindings with a high enough DIN setting to cope with some air-time on the descent. I enjoyed the peace, tranquility and exercise offered by the uphill, but the descents were always the carrot that got me to the top. Then a request from Blue Peter changed all that.

The presenter Lindsey Russell was looking for a ski-related challenge and I could think of none greater than racing the Patrouille des Glaciers (PDG). The 53km from Zermatt to Verbier, with 4000m of vertical ascent, is a long day out in anyone’s book, but for Lindsey it would be a huge challenge. 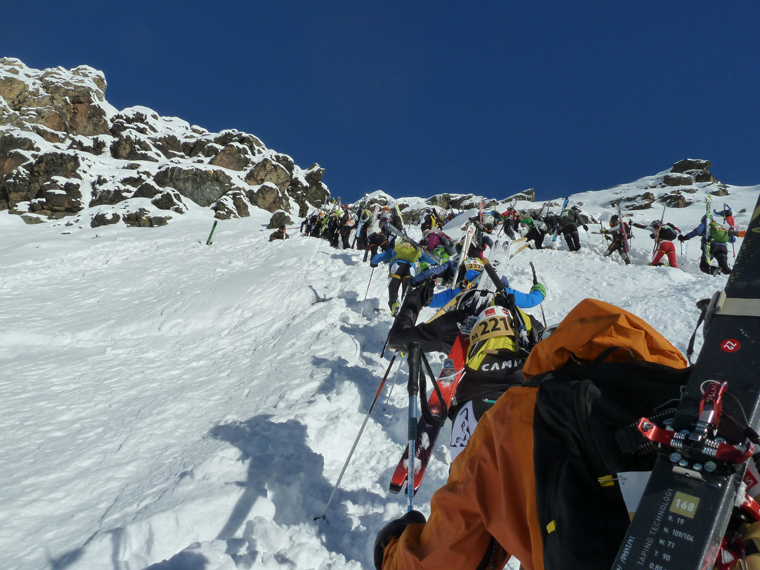 Janine Frost’s husband, mountain guide Graham Frost from Evolène, was brought in as team leader, and the process of training Lindsey began in November 2013, five months before the race. Lindsey was already an advanced skier who could tackle off-piste and black runs, but skimo requires so much more both physically and technically.

Graham taught Lindsey the most efficient way to skin up, and we worked on skiing off-piste on skinny skis and lightweight boots, both roped together and in the dark. We also worked on the technical aspect of removing and re-applying the skins as we wanted to minimise time lost on the changeovers.

Lindsey worked hard, running and fell walking, to get her fitness up to a level that could cope with 17 hours of non-stop exertion. It can take years to improve the body’s aerobic capacity, but with help from fitness coach Greg Whyte we got Lindsey to a level that put her finishing on the cards.

There were a few tears and close calls along the way, but we made it to Verbier in 17hr 20min in 376th place. Yes, we were considerably slower than the winning team – who posted 6hr 1min – but we were happy to avoid the fate of the 126 teams that did not make the finish at all. FL