When I posted my customary Facebook status update at Gatwick, to gloat to my office-trapped friends that I was en route to the snow, I wrote “Heading to the mountains again,” a little embarrassed to admit I was bound for Andorra. I was, in fact, going as a favour for a PR friend who insisted the place was worth a look, and for whatever reason I wasn’t expecting great things.

It was a bit of a different story two days later, when back in my hotel, exhausted in the happy way that only a big day on the slopes can provide, I triumphantly uploaded a picture taken from the run-out of a nice gnarly couloir, announcing I’d been skiing steeps and drop-offs, and adding: “Andorra eh, who knew?”

I had spent the day tearing around a little place called Arcalis, trying to keep up with Pascal, a former member of the Belgian ski team. Tucked away at the head of the long Ordino Valley, with no accommodation at its base, Arcalis is an hour’s drive (or free bus) from nearby Pal/Arinsal, with which it shares the Vallnord lift pass, and also an hour from Soldeu (on a different pass).

It’s the kind of place that smacks you between the eyes and blows away the naff reputation still clinging to Andorra, the teeny, peak-ridden land sandwiched between Spain and France and known for its beginner slopes, duty-free status and pub crawls. There are 12 lifts (four chairs, eight drags), the pistes are mainly reds and there’s a modest 685m of vertical. But that’s not why people come here.

Arcalis holds a secret – serious off-piste terrain, and this season it will host a leg of the Freeride World Tour (FWT).

The El Dorado freeride comp has been held in Arcalis since 1998, and has been a qualifier for the Tour. But this season
(14 February 2015) it is one of the five venues for the FWT proper – and damn right it should be, too.

Pascal collected me from the base “lodge” where I’d enjoyed a €1.50 coffee and pastry (another reason to love this place), and I asked him why a few people around us were turning on their beepers. It was 18ºC and had been for several days – but this area faces north and north-east, with much of the skiing in the shade until later in the season, and the spring-like conditions on the March day of my visit were glorious.

Arcalis is like one, big, natural fun park. Take the chairlift up Pic L’Hortell (no need to queue) and skier’s right is a ridge, plus nicely spaced trees to give run after run of freshies on a powder day. 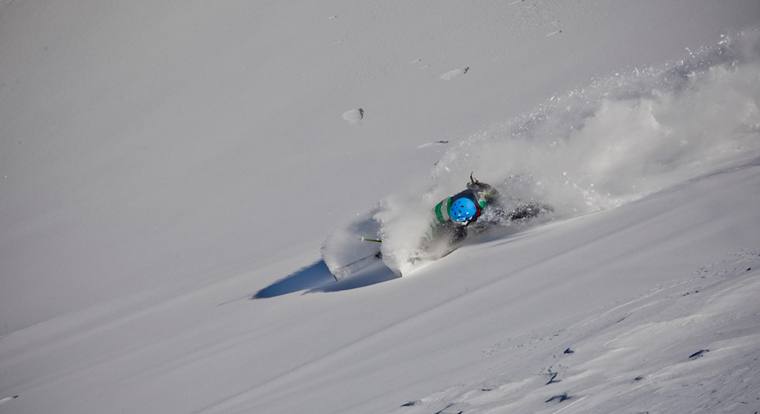 Pascal took me down couloir after couloir and off small lips, cliffs and cornices. Ropes are fixed to some of the rocks to help you climb, and the vast bowl off the back of Les Portelles (2552m) was criss-crossed by a school group ski touring up the highest peak, Pic de Cataperdis (2824m).

Andorrans take their skiing seriously, with the state funding lessons and giving kids regular time on snow during the
winter term.

At the top of the Les Portelles lift is Refugi les Portelles, the only on-mountain dining in Arcalis, and a winning spot, with scores of deckchairs to soak up the rays. It is owned by the friendly David Alonso who also has a freeride shop in Sornàs, one of the pretty stone villages on the road up to the ski area base. David stocks Zag skis, and his mountain hut is a freeriders’ hub during competitions.

The blacks in Arcalis are never groomed, and there are two large – and patrolled – freeride areas, with their very own ‘piste’ map, in which you can more or less ski anywhere. Mixed in with the steeps are gentler parts for novice off-pisters.

Andorra is beginning to grow in popularity with the Brits once again, and the inclusion of the El Dorado in this year’s FWT will no doubt put Arcalis on the map. Go now, while things are still quiet. FL