Phillip Ingle, a seasoned mountaineer and ski instructor, describes how he was caught in an avalanche in Scotland earlier this season

In mid-January I was up in the Cairngorms for a bit of winter climbing. Conditions were blustery, with winds up to 50mph and flurries of snow. We trudged up to the Coire an t’Sneachda to see what was in condition. There were a few bods about, three largish groups, from centres or clubs, and a few pairs of climbers.

Alladin’s Mirror Direct (Scottish grade IV) looked good so we headed up that. The main ice pitch was great. It was steep as the ice had not banked out much, but the ice was positive and we cruised on up. At the top we battled our way through the wind to the descent down the Goat Track.

It’s known as bit of an avalanche black spot so we didn’t take the decision lightly. From the base of the cliff we had seen that the majority of the gully had been stripped of snow by wind and that there were just isolated patches of snow here and there.

On the way down we set off following raised ribs of rock and heather, but we ended up running into a dead end where two gullies of loaded snow on either side of us met below us. 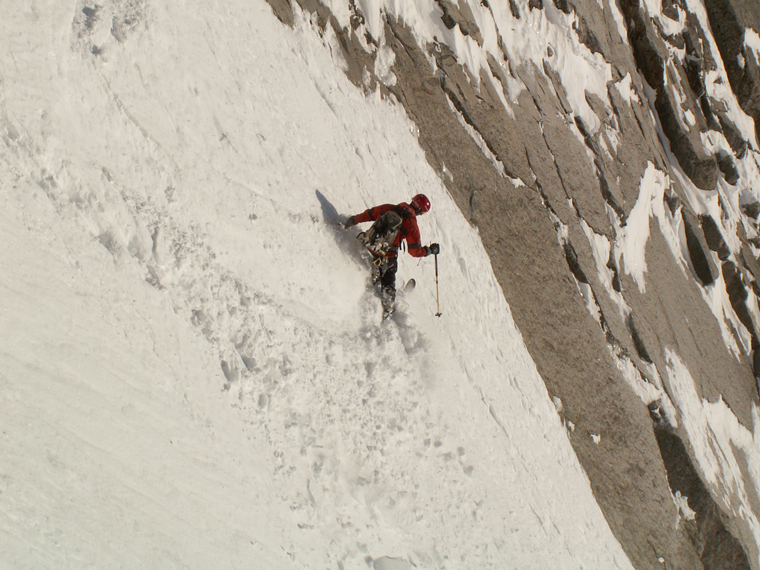 We decided to use the rope to cross safely. The gully to our right was 4m wide, so I paid out 5m of rope, gave Frazer the end to tie into, and tied him off to a boulder I was on. As he set off across I started to look for the other end of the rope to tie onto so he could secure my crossing.

The next thing I knew I was engulfed in snow and sliding down the hill. I swam as hard as I could to stay near the surface, but I was slowly dragged further and further down. I was wearing an Avalung backpack, but I couldn’t get hold of the mouthpiece.

I was starting to think I would die, and getting quite upset with myself about it, when all of a sudden I was airborne. I was in the air long enough to get concerned about what would happen when I landed, and then some. I really started to get scared when there was a bang, I saw flashing lights and felt pain all over my body. I was still under snow, but it felt like there was less of it now. Then I went weightless again for a short time.

This time I landed in a boulder field. I was bounced from rock to rock. Then I was sliding in snow again. I could sense the surface and a slightly bluer coloured snow, so I swam towards it.

As the slide came to a stop I was on the surface and could breathe. I was so happy to be alive that when Frazer shouted down I shouted back, “I’m all right,” when I was not that all right.

My knee wouldn’t bend; my collarbone and hand felt broken and my hip felt sledgehammered. My helmet had a hole in it.

Frazer had taken a small swing on the rope, which had held him, and he was fine, but shaken. He had to sort out the ropes then make his way down to me without triggering further slides. Which he did.

A guide and a trainee guide came down the same way shortly after us, and between them and Frazer they carried my gear down and I made my way down with a pair of poles. The mountain rescue met us at Cairngorm ski resort. Miraculously, all that was broken was a bone in my hand. The rest is massive bruising and some strained joints.

I am still not sure how I ended up in the slide. As Frazer crossed, the slope had gone, as we expected it might. Either snow from above knocked me off, or the rope caught me as Frazer swung below. Either way, I’d miscalculated the safety of the spot where I was standing.

Want to improve your avalanche awareness? Courses are available through companies such as Jagged Globe, Mountain Tracks and Glenmore Lodge