Hooray! We have won the Euromillions. Well actually we haven’t, but where would we go if we did? And which trip has so far come closest to a trip of a lifetime for us? The Fall-Line staff reveal their idea of paradise

I’ve had plenty of time to think about this! Because when people find out you work for a ski magazine, it’s usually not long before they ask: “What’s the best place you’ve ever skied?”

I warm them up with a quick double tap: Utah and Jackson Hole. The first is my favourite road trip, packed with giant, mythical must-ski mountains, and in a good year enormous pow. The second, bloody hell! It’s a proper, steep, crazy hill and I’m pleased not to have to drop Corbet’s every season. Hello 20ft mandatory air! Gulp. It’s by far the most frightening and rewarding thing I’ve done. 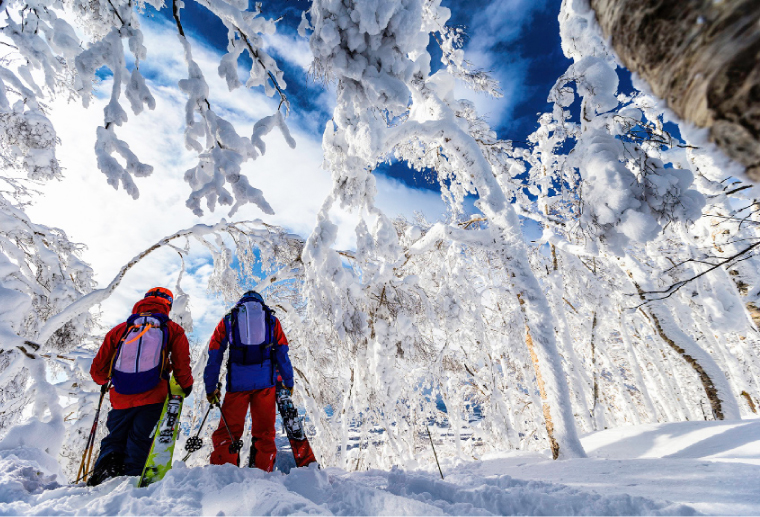 But my all-time favourite is Niseko. And just on the other side of mighty Mt Yotei, Rusutsu (google Supernatural terrain park for instant inspiration). I’ve spent a shade under nine weeks skiing both in the last three seasons, with the trip that really got me hooked in 2014. Setting out on my own, for just short of a month on 1 January, felt like some sort of absurd New Year’s resolution. But it snowed and snowed and snowed. I think the stats were something like day one 90cm, day two 40cm, day three 60cm, day four 30cm… And it went on and on!

For someone like me who lives to ski powder, it was unbeatable and incredible. Yes, it is a long way compared with the Alps – and even North America – with Hokkaido two flights away, but boy is it worth it. And if you’re freshie-obsessed you can’t argue with an annual average snowfall a shade under 16m. That’s twice as much as anywhere in Europe can usually claim and right up there with the world’s snowiest resorts of Baker and Alyeska.

The latter brings me neatly to the absolute dream, money-no-object destination: Alaska. Every year I say I’m doing it. Getting older, got to tick it off. But it never seems to happen. 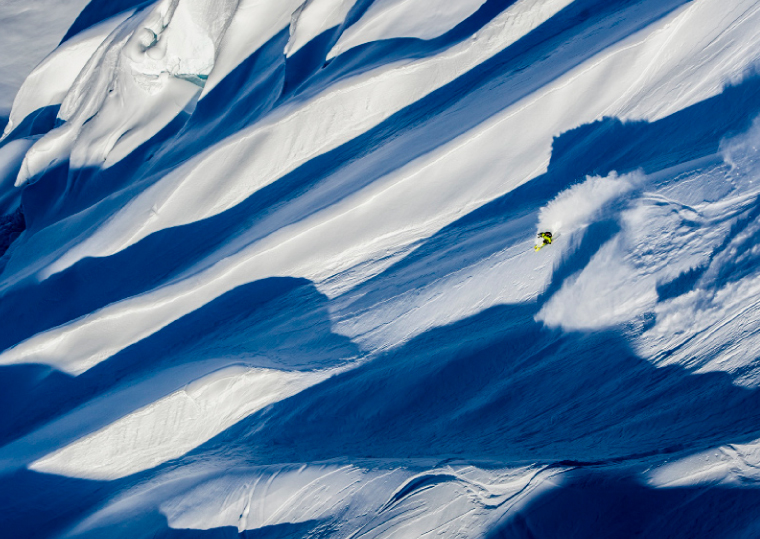 Partly that’s because of the Niseko love-in (absurdly cheap lift tickets, so friendly, amazing food) but I live in hope that Fall-Line’s dear publisher will win the pools and take us there as a thank you for all our moaning about poor wages, Apple Macs from 1986, and him eating all the biscuits. Stranger things have happened. Or have they?! 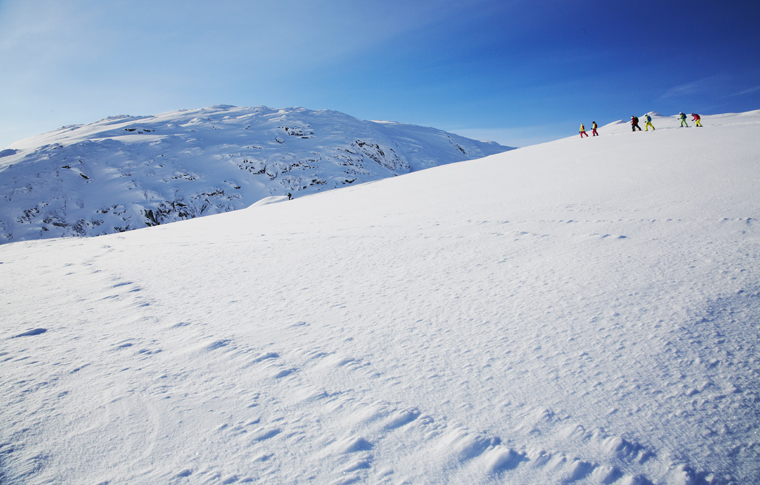 Are we at the Arctic Circle yet? | Haglofs

But the skiing? I wasn’t too sure. We spent the first day exploring the resort, all 15km of it. What it lacked in size it made up for in every other aspect. The snow was crisp and untouched. The terrain a perfect mix of mellow meadows and rocky faces. The views; white wilderness.

The next day we ventured further into the hinterlands where a few hundred metres of skinning unleashed long, track-free descents. The only thing that made me want to leave was the price of a beer at the hotel bar…

My dream trip will take me 6000km south of this, to the war-torn Indian region of Kashmir. Despite the tensions in the region, its ski resort of Gulmarg has become a cult destination, famed for its vast backcountry (accessed by the highest ski lift in the world at 3979m) and three-day-long snow storms. But that’s not the only reason I want to visit.

During WWII, my grandpa was one of the many British Army officers to visit Gulmarg on skis while on leave from combat in the region. There were no lifts – he made do with sealfur skins and 2m skis, but even then, Gulmarg was the spot to visit.

I don’t know much about the details – just vague memories of rambling anecdotes and one sentence in his memoir – but I know he stayed in Nedou’s Hotel which, amazingly, is still running, so that’s where I’ll stay. I’ll take skins (nylon, probably) so I can venture beyond the lift line, and perhaps unknowingly follow my grandfather’s long lost tracks.

Are we at the Arctic Circle yet? | Hagloefs

Purely from a powder perspective the three weeks I spent in Fernie, BC, as a Ski Club of GB leader four years ago ranks top. It barely stopped snowing and I got to know the fantastic steep terrain inside out, in epic conditions, showing mostly very experienced skiers around.

A vital element, however, was missing: close buddies! I made a handful of nice new ones, but exhausting myself so thoroughly each day meant that après-ski past about 6pm was impossible and I felt a little lonesome in my lodgings – a basement room in the holiday home of a sometimes-there older couple.

For all-round brilliantness and harmony, top of the tops was a ski tour in the Bernina district, on the Swiss-Italian border, with my cousins. Long April days, sunshine, a superb guide (Michele Cucchi from Alagna) and deserted mountains. From day two to five we were alone save for a fitter Austrian group on same route who threw in a daily peak.

Our challenges included entertaining roped-together descents, a practice crevasse rescue with me as victim and climbing Piz Palü among chattering Italians, some in jeans and trainers.

The huts had small dorms and good food. Nobody snored. The day before our Palü climb we had the luxury of a shower in the hotel-like Diavolezza hut, and we descended into springtime off the Morteratsch glacier, fit, tanned and satisfied.

I’d book two weeks off and gather my husband, sister and a couple of fun buddies to get a last-minute flight to wherever in the Alps conditions and forecast look best, erring towards Austria, Switzerland or Italy.

We’d join up with a guide: why not Fall-Line’s own Martin Chester? Failing that, Nigel Shepherd, Thomas Grichting (Zermatt) or Michele Cucchi.

We’d do a combo of lift-accessed backcountry, day tours and the odd overnight tour. We’d pile our stuff into a seven-seater so we could chase the snow (CDs loaded with cheesy Alpine music), and book a few nights at a time, staying in b&bs and rounding off each day with something like a rack of ribs in a sweaty hut full of noisy Teutonics, some cheesy après-ski with lashings of DJ Ötzi and/or Bobo, or one of those fab Italian bars where you order a glass of wine and a giant plate of free antipasti magically appears too. 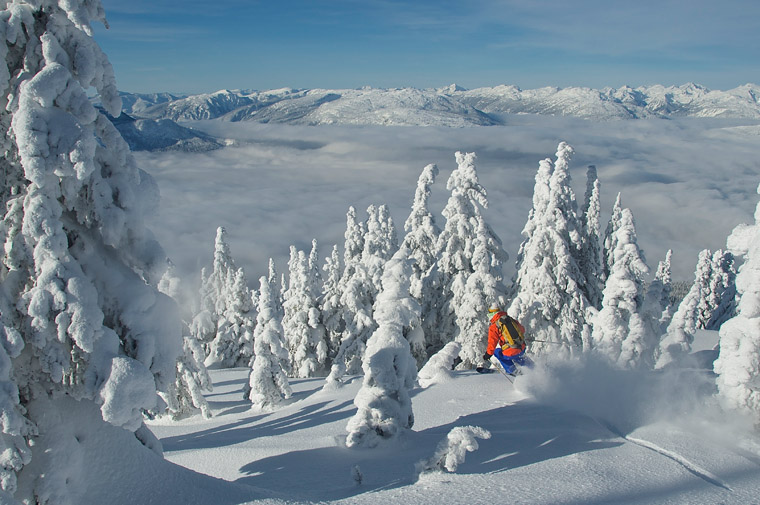 Nicola ripping Revy on her best trip yet | Chrigl Luthy

It’s not the forests of trees, laden with recent snow and perfectly spaced in parts. Or the steep, narrow chutes that line the North Bowl, all in pristine condition. It’s the mean-looking descent under the gondola, Kill the Banker, that I think about most when I reminisce about my 2013 trip to Revelstoke. It was on day two, as I slithered between the monster moguls and steep boulder-strewn pillow line, heart pounding, legs burning, that I realised I was having more fun than I remember ever having on a pair of skis.

I’d read dozens of articles about this place (“All hail North America’s longest lift-accessed vertical!”), but nothing could prepare me for just how awesome this 3121-acre play park is. And play we did, first lift to last, never once having to queue; this railroad town is so remote (a six-hour drive from Vancouver, deep in the Selkirk Mountain range) that it is the preserve of those willing to make the effort to reach it.

We didn’t need the heli skiing. Really, we didn’t. But when on day three the opportunity arose, it seemed rude to say no, so up we went. What ensued was six hours of cheek-cramping fun, scribbling down immense, untracked bowls, thigh-deep in powder. My favourite line? Our sixth and final drop. A run called Serac, due to the giant ice formations that sweep its shoulders, with its runnelled spines of weightless powder.

I have not skied powder as light and perfect since that trip. But I am sure that if I ever make it to Japan – top of my dream-trip list – I might find something close to it. How much snow is it that Niseko gets each year? Fifteen metres? With 2000 square miles of terrain, that is a lot of powder. I hear that its forests of slender silver birches take tree skiing to a whole new level.

I’d hire some local ski guide guru to show me the best spots – the secret lines that only those in the know know about – and a videographer to record it all on film, so that years later, when those lines seem like some wild distant dream, I’ll have the proof that I was really there. 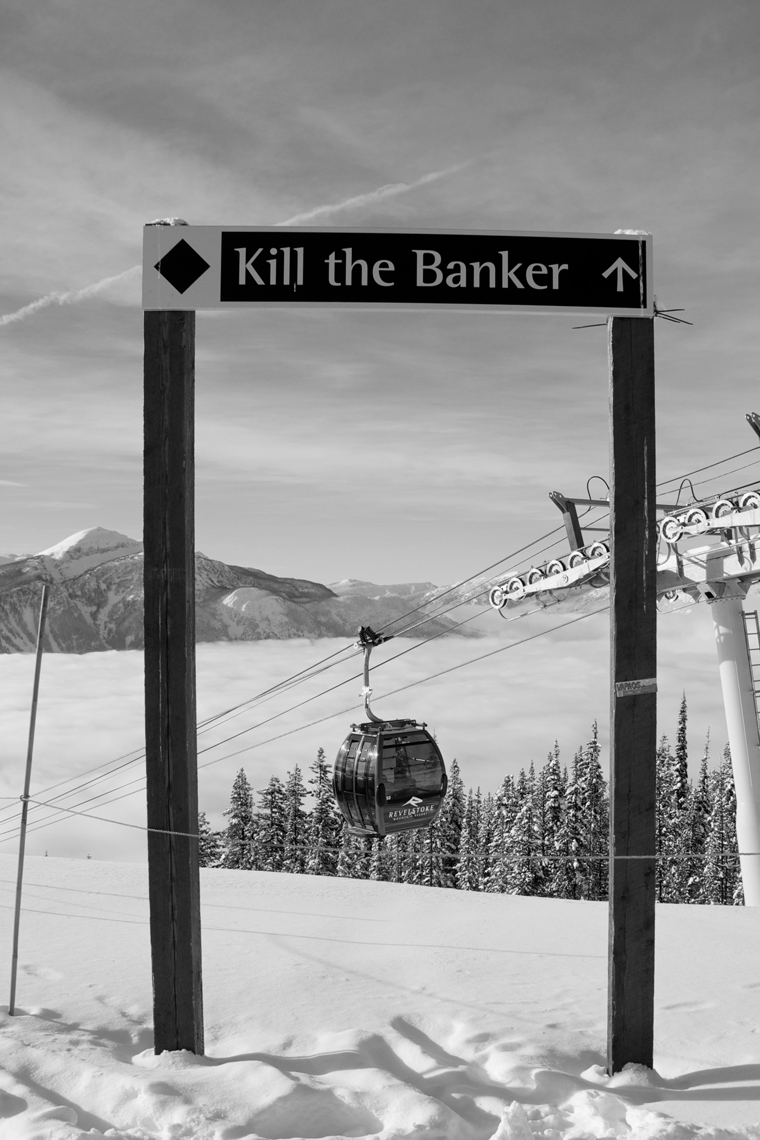 There are two I’ve done that stand out; one in Utah and the other in the Dolomites. Both were whistle-stop road trips around several resorts, and both had decent enough conditions to get a real feel for the regions. But it’s the first time I’d been to the Dolomites that gets my nod, for reasons that initially won’t become obvious.

Anyone fancy doing 13 resorts in six days, towing nine members of a youthful snowsports team around for photoshoots for a travel feature? Me neither. It meant nightly changes of hotel, constant van-loading and herding alternately enthusiastic and knackered riders up hills, away from terrorising the pistes and into photogenic locations which, as I cast my eyes upward finally, appeared to be everywhere.

After a couple of relentless days’ shooting, hiking, positioning and grumbling there came the point where we looked through some of the photographer’s shots and everyone realised we were about to deliver a stunning set of features.

This was also the point when we looked back at the accommodation we’d stayed in, the food we’d eaten, the uplift, the closeness of the resorts and realised that we might have stumbled on the best European location for a proper ski safari. Then we did the Sella Ronda a couple of times and realised you could knock off four proper sized resorts plus some of the best backcountry around from one base.

Our shots stimulated event organisers to look again at the area, and we’ve used them again and again for features. I’ve since taken and steered friends to Selva, Arabba, San Martino, Cortina and Corvara on effortlessly successful holidays.

The most enduring legacy for me is that Kronplatz (or Plan de Corones – everywhere is bilingually named) is where my children have learned to ski, and we’ve pointed dozens if not hundreds of families there. All they have to do is make the effort to book hotel, flight and lessons rather than taking a package.

And that’s why Brits rarely get any further than Selva in the Dolomites, because the family hotels don’t work with package companies. To paraphrase the words of Johnny Cash: I’ve been everywhere, man – and the Dolomites are worth the tiny extra effort.

For a journey to dream about, it has to be one of those sea-to-summit fjordy-type explorations; I spent my early life sailing and linking it with skiing would feel complete.

Everyone has to have concerns about turning dreams into reality but mine centre almost entirely around having several pairs of drying ski socks in a small cabin.