Emily Sarsfield, the UK’s number one Ski Cross athlete, chats to Graham Bell about finally making it to the Olympic Games and being part of the ultimate team.

In PyeongChang 2018, Emily Sarsfield became the first British Ski Cross racer to compete at an Olympic Games. At 34, she finally achieved her ambition of becoming an Olympian. Like so many Ski Cross athletes, Emily had competed as an Alpine ski racer in her youth, switching to Ski Cross in 2005. A serious knee injury ruled her out of Vancouver 2010, and she missed selection for Sochi 2014 after the British Olympic Association turned down a quota spot that would have allowed her to compete.

A couple of top 15 World Cup results in the 2017 season had given Emily a chance of selection for PyeongChang, but after previous disappointments she was not taking anything for granted: “I only got the selection phone call a couple of weeks before the Games began. Up until that point I’d been focusing on my racing and not trying to think about the Olympics too much. Once I knew I was going, it was just a crazy whirlwind of getting kitted out and flying off to Korea.”

Once at the Games, Emily had time to attend the Opening Ceremony and settle into the Olympic Village, as Ski Cross sits in the second week of the programme. The BOA have become very good at creating a winning mentality at the Olympics; the confident team spirit established at London 2012 and Rio 2016 now exists at the Winter Games. “Team GB brings everyone together as one big family, and for someone like me, who so often has to train alone, it’s nice to be part of a team. Lizzy Yarnold was so supportive, and it was great to see Dave Ryding as we grew up ski racing together.”

Competition day for the Women’s Ski Cross saw a rare occurrence in PyeongChang: a dump of fresh natural snow. It slowed the track down, but didn’t make it any easier. “We only had two training runs before the qualifying run, and no-one wanted to come up short on any of the jumps, so I asked Ophélie David if I could follow her down.” It seemed like a good choice as the 41-year-old French skier is a legend of the sport with four X Games golds and a World Championship gold. “About half way down, Ophélie got twisted on a jump and crashed right in front of me. I thought she might be hurt, but with only two training runs, I didn’t stop to find out.” (Ophélie had torn her ACL and was out of the competition.)

Emily placed 22nd in the qualifying run, and was drawn in a first round heat against Alizée Baron of France and Canadian India Sherret. “I was so pumped for the competition I pulled hard out of the start, jumped too far, and landed in the flat bottom of the first wu-tang [the initial steep terrain features]. I lost all of my speed and was having to play catch up.”

Luckily (for Emily) India crashed, allowing her to pass and progress. “Stupidly, in the quarter-finals, I did the exact same thing out of the start.” But this time Emily wasn’t able to overtake, and was knocked out of the competition, recording a respectable 16th place. She hopes her experience at the Games can help inspire the up-and-coming members of the British Team.

“The British Team is more professional now than it’s ever been; at the last training camp we had 17 athletes training in both Ski and Snowboard Cross.” The employment of former World Snowboard Cross champion Guillaume Nantermod as head coach has proved a wise move by GB Snowsport. Last summer, Ollie Davies won the Ski Cross World Junior Championships in Cardrona NZ, and last autumn World Cup winner Charlotte Bankes switched nationalities from the French to the British team. Confidence is running high in the Cross disciplines.

If they can replicate the results of the GB Park and Pipe programme, expect more success in the mountains.

A look at the 2018 Winter Olympic site 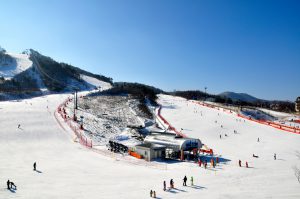 EMILY SARSFIELD – QUEEN OF THE WU-TANG 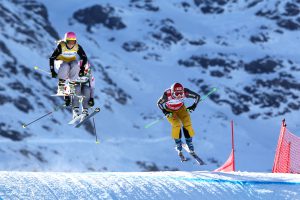