Fall-Line’s tame medical student Elliot Marshall has fled the UK for snowier climes in New Zealand. This is the first of a six part blog documenting his experience as part of Mt Hutt’s Medical Rescue team

Mount Hutt, or Mount ‘Shut’ – a largely affectionate nickname coined by local residents of the Canterbury plains from which it imposingly rises – is a 2190m mountain on New Zealand’s South Island. The uppermost snowy basin of this formidable peak houses the ski resort to which the mountain owes it’s adopted name.

Mount Hutt is the most accessible ski field for residents of the island’s largest city – Christchurch. However, its exposed location on the very eastern flank of the Southern Alps also leaves the mountain particularly vulnerable to extreme stormy weather fronts approaching from the coast. Combine a popular ski resort that rhymes with a synonym for ‘closed’ with raging inhospitable winds that force ski lifts to stop running; a nickname is born.

The reason for me relaying you these facts is twofold:

Firstly: 3 months ago I was a fourth year medical student with an all-consuming drive to be in the mountains and a medical elective to organise. Accordingly, following months of dead end email strings and disappointing no-can-do’s for equally ambitious mountain-based medical electives, I was thrilled to find out that I had been accepted as a member of the medical rescue team at Mt Hutt ski resort.

Presently: being holed-up for 48 hours in a camper van due to aforementioned storms flooding many of the Island’s main roads and preventing access to skiing for 3 days isn’t a situation devoid of irony given my location.

Flying over the Southern Alps to land in NZ ? #newzealand #southernalps #mountains

However, there are positives to be drawn from this time spent in confinement. Torrential rain on the low-lying Canterbury Plains is precipitating rather nicely as a metre of fresh snow at the considerably greater altitude of Mt Hutt. Further to this, I have had ample time to reflect on my first week (albeit 3 days on, 3 days ‘rain stops play’) with Medical Rescue and hash together the first in a series of six weekly blogs outlining my time spent at Mt Hutt. Here goes…

I would like to start by stating that being captive in a camper van for 48 straight hours in a storm is not representative of my experience travelling New Zealand in the winter to date. My good friend Stuart (a fellow Medical Student and mountain enthusiast) and I have spent the last two weeks touring the beautiful and staggeringly contrasted landscapes of the north part of South Island (a mouthful – I apologise). From isolated, idyllic beaches of the Abel Tasman national park to tramping (New Zealandish for hiking) on the snowy, windswept ridge tracks of the Lewis Pass, we have been greeted with blue skies and sunshine most days.

Don’t mistake this imagery for warmth though – the South Island is devilishly cold in winter most of the time. Add to this a low number of tourists and you have a stunning plethora of wilderness exploring at your disposal – given you bring the right gear to be safe.

As the Medical elective at Mt Hutt drew closer, we were greeted with the welcome news of fresh snowfall – half a metre at the resort! Two days later, we arrived excitedly at our new base for the coming 6 weeks, a charming camping ground just outside Methven, the town with closest access to Mt Hutt.

Logistically, skiing in New Zealand is most comparable to skiing in Scotland. Ski fields are generally small compared to their European or American counterparts, with no accommodation in-resort. Notoriously dicey access roads are long and most frequently uncleared. This owes in-part to the relative isolation of smaller resorts served by local towns connected by single, long roads and also to the sparse population of the huge South Island itself! 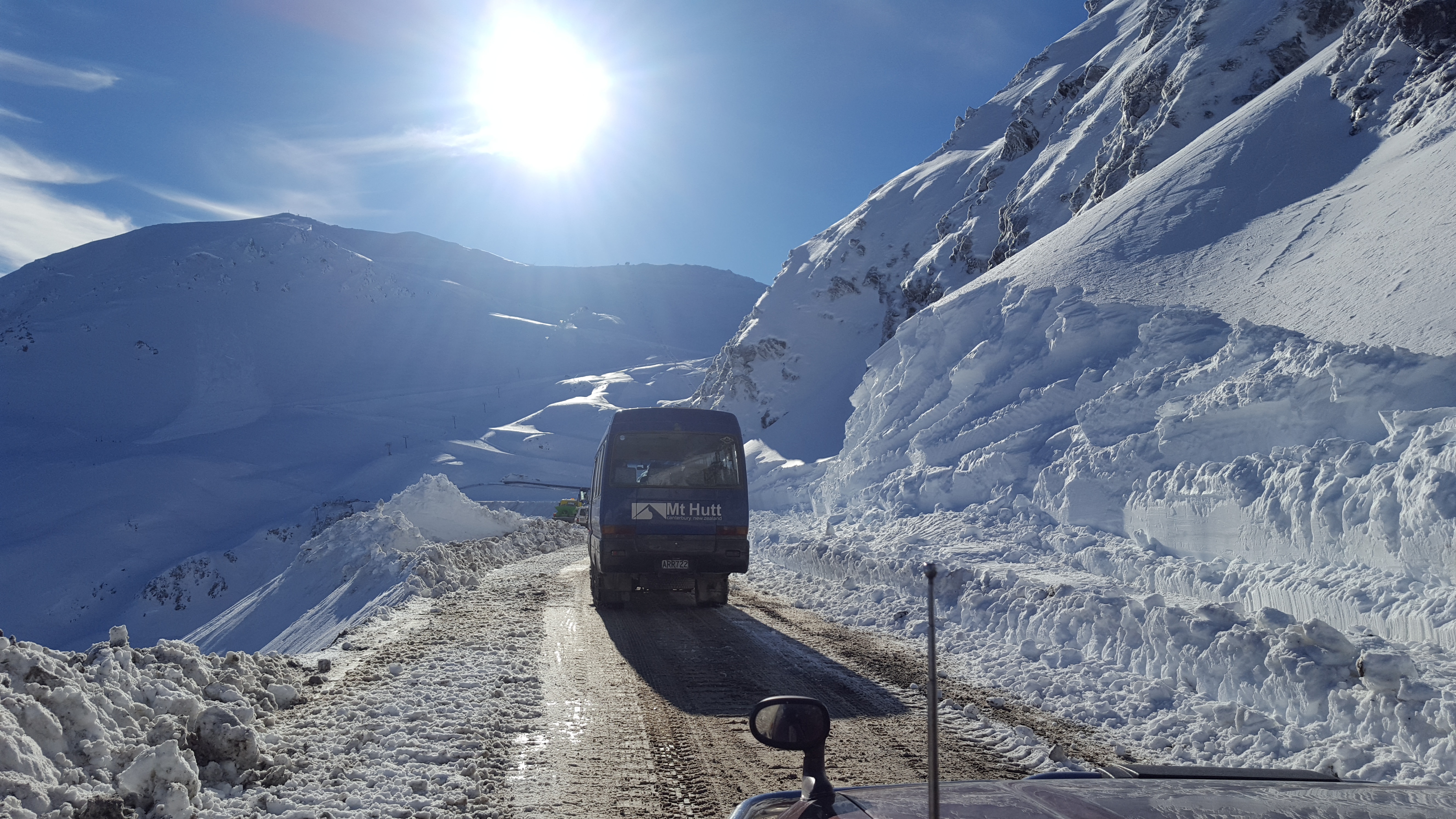 Collecting our ski passes, we enquired about the staff shuttle – to be taken with a pinch of salt – which would crawl us and our fellow mountain staff up the 16km narrow gravel access road each day. A 7am bus would necessitate a 6am wake up – an alpine start for two hitherto holidaying medical students – the horror!

Nerves and excitement punctuated my first morning. I had little idea of what our jobs on the mountain might exactly entail: despite mentioning fresh snow on two occasions already, don’t allow me to lead you to believe that I’m a skiing aficionado. I’m a mostly competent skier if somewhat lacking in style, but by no means a powder hound yet!

The ride up to Mount Hutt was breath-taking in two ways. The road, whilst protected by metal and occasionally snow barriers, cuts an incredibly exposed line through steep slopes to access the snow field. Despite this exhilaration, the timing of the sunrise was otherworldly. The darkness of a cold, cloudless morning was vanquished just as the bus climbed high enough to see all the way east to the coast. The Canterbury Plains, green and vast, are laid before you as the sun begins to reflect off the huge, snow capped mountain above.

On arrival, we met the Medical Rescue team and were introduced to the clinic and equipment we’ll be working with. The medical centre is staffed by a doctor and a nurse, both with considerable experience of trauma and emergency medicine. Some necessary but mutually boring introductory points are covered – commonplace with starting any medical placements. You can take a clinic up a mountain but you can’t take the red tape out of the clinic. With our boots and skis in the correct corner of the storeroom, the doctor took us through what is likely to be an average day. The variety of ailments and injuries we are likely to see is exciting, and the chance to provide medical help to people so shortly after injury is also novel! 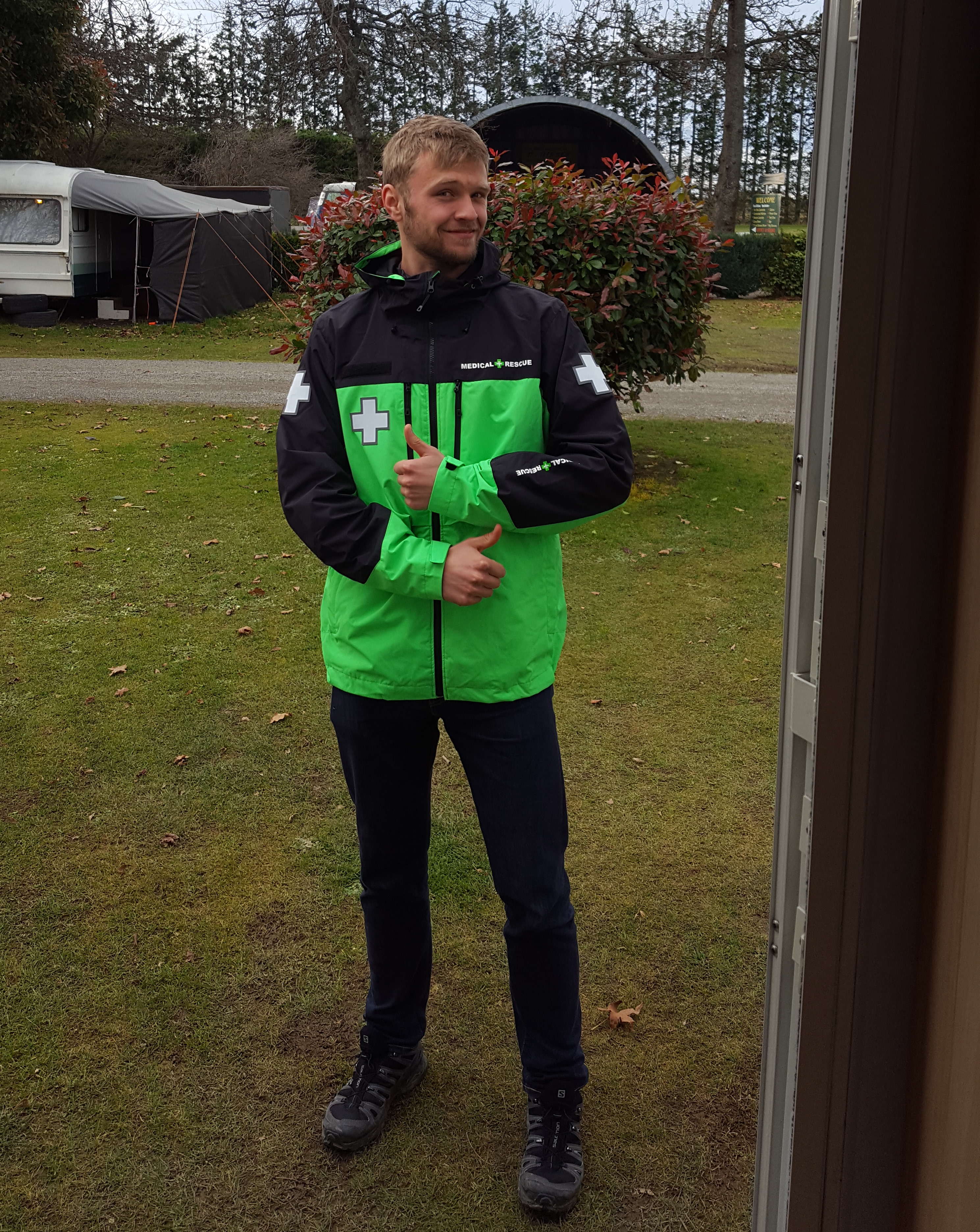 A morning on the mountain starts with a debrief from the ski patrol team. This consists of incredibly detailed reports about the snowpack in all areas of the resort, weather and avalanche risk, and delegation of the vast amount of tasks which the team tackle every day. I make a mental note to read into these further and to look at predicting how busy the resort is likely to be on any given day. All of these factors will impact on the clinic workload. I am excited to hear that we can help ski patrol with setting up the resort each day. This means skiing with some incredibly experienced mountain professionals, and, of course, fresh tracks on the snow!

I hop eagerly on the summit six chair lift, which covers 400m of vertical ascent from the resort base to summit, and report to the dispatch hut at the top. This is where ski patrol co-ordinate responses to challenges that arise during the day, including the delivery of patients to the medical clinic.

Back on snow, Kiwi style!

The first run of the season is an intermediate slope, ‘Fascination’.  It is exhilarating and reassuring all at once. I can still ski! I hope that this illogical concern isn’t one that only plagues myself on day one of a skiing trip. Despite accruing several skiing weeks and various relevant pieces of evidence to the contrary over the last few years, I find that I am unable to rid myself of the creeping suspicion that I have completely forgotten how to ski until I’ve finished the first run in one piece.

After a more complete medical induction in which we discuss common injuries which we are likely to see, and importantly the limits to which our competencies allow us to participate, we are told to go out and ski – to familiarise ourselves thoroughly with the mountain and get our ‘ski legs’ back. Doctors orders!

Mount Hutt ski resort is a large basin extending and widening from the summit ridge of the mountain down 600m to the snow line. Many marked runs wind gradually or plummet spectacularly down the basin from the 3 chair lifts which feed the mountain. The whole resort, if deemed safe by ski patrol, is an open canvas from which you could pick hundreds of unique lines! 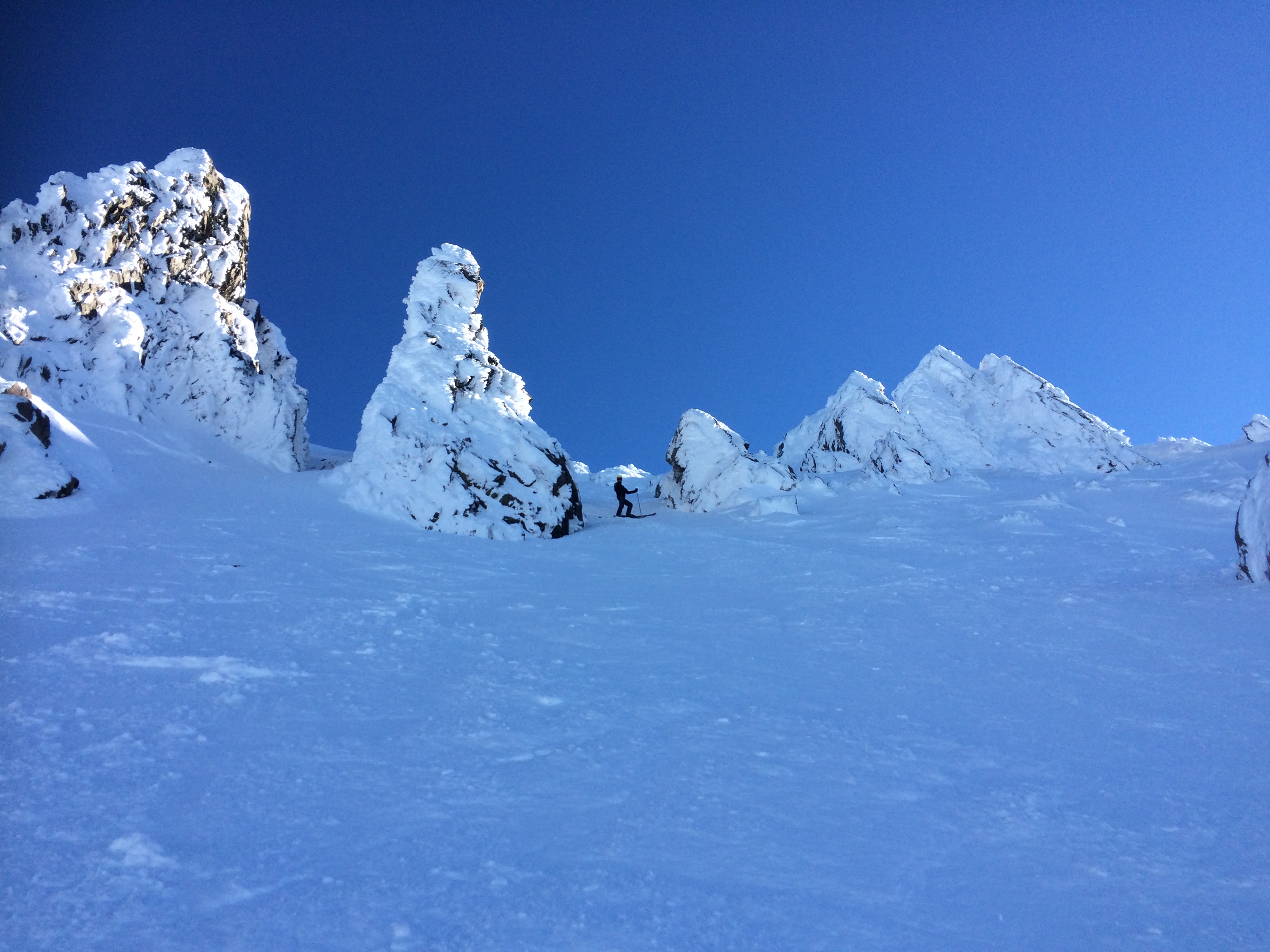 There is also some spectacular off-piste (or trail, as they’re known in New Zealand) skiing. The ‘Towers’ trail really stands out in my mind. A traverse along the south ridge from the summit brings you to the top of a large, steep snow field. Along the top of this field, vast pillars and stacks of rock thrust out of the mountain. Once these have been navigated by weaving a path through the narrow gulleys between the looming rock towers, the claustrophobia is obliterated as the slope opens up to a wide, steep and lengthy powder field. It is both thrilling to ski and to see.

Our first 3 days were largely spent skiing. We help ski patrol with easier tasks such as closing off areas of mountain deemed unsafe for the public, complete a mountain sweep to ensure everyone is safely off the slopes at the end of the day and debrief before piling on the bus to head to the pub in town.

One medical experience does stand out to me from those first few days. A teenager wandered into clinic having fallen without wearing ski gloves, and had grazed his finger slightly. Having assessed his ‘wounds’ as minor and applied some clean dressing, he confided in me that he might be suffering from frostbite! Shocked, I asked him to show me the area he was concerned about. He pointed to the same fingers, warm and well perfused, that I’d applied plasters to seconds before. My first reaction was relief, and then to stifle a smile that threatened to betray my explanation that it was a very understandable concern, but that he had nothing to worry about; he could reasonably expect to keep his fingers.

That evening, as we bunkered down after a night out called ‘skiflix,’ in which resort workers compile funny footage from the previous two weeks to make a low-budget film, drizzle started steadily falling, followed by the storm which still rages outside as I write this. Occasionally our camper rocks with a strong gust of wind, and the rain pelts the windows so loudly it can be hard to fall asleep.

That’s all okay though: more snow is forecast tomorrow with more hospitable weather on Sunday. We’re likely to head up the mountain to a new blank canvas to ski. I’ll keep you posted.

Words and photos by Elliot Marshall. See more of his adventures on Instagram.