Fall-Line’s tame medical student Elliot Marshall has fled the UK for snowier climes in New Zealand. This is the second of a six part blog documenting his experience as one of Mt Hutt’s Medical Rescue team

Words and photos by Elliot Marshall. Read the first instalment of his blog here. See more of his adventures on Instagram.

Medical Elective blog 2 – When it rains, it pours

A somewhat clichéd title to my second blog post seems fitting, given both the current weather as I write this, and the somewhat clichéd cliff-hanger fashion in which I signed off on my last entry. As I reflect on the events of my second week working with medical rescue at Mt Hutt ski resort, a steady drizzle has converted itself into an even steadier rain outside the adopted home on wheels that my friend Stuart and I have called home for almost four weeks. Fortunately, this rain is unlikely to turn our campsite into the Olympic-sized aquatics complex which formed around us shortly after I started writing last week’s instalment. Unfortunately, the relevance of my chosen title – not solely confined to the weather which has preceded both blog writing efforts – will become more apparent as I relay the events of the past week…

As the 48 hour deluge ceased, a trip into town for coffee was the perfect antidote to the cabin fever which had begun to brew within the confines of our camper van. As we mulled over plans for a mountaineering excursion within the coming week, Stuart was messaged an invitation to the local climbing wall from one of the ski patrollers. Built by a different patroller from a previous season, the climbing wall consists of a small, overhanging bouldering wall and a taller, top-roping section – all built within the town office, a ramshackle corrugated steel warehouse in which the Mt Hutt resort staff buses are housed! 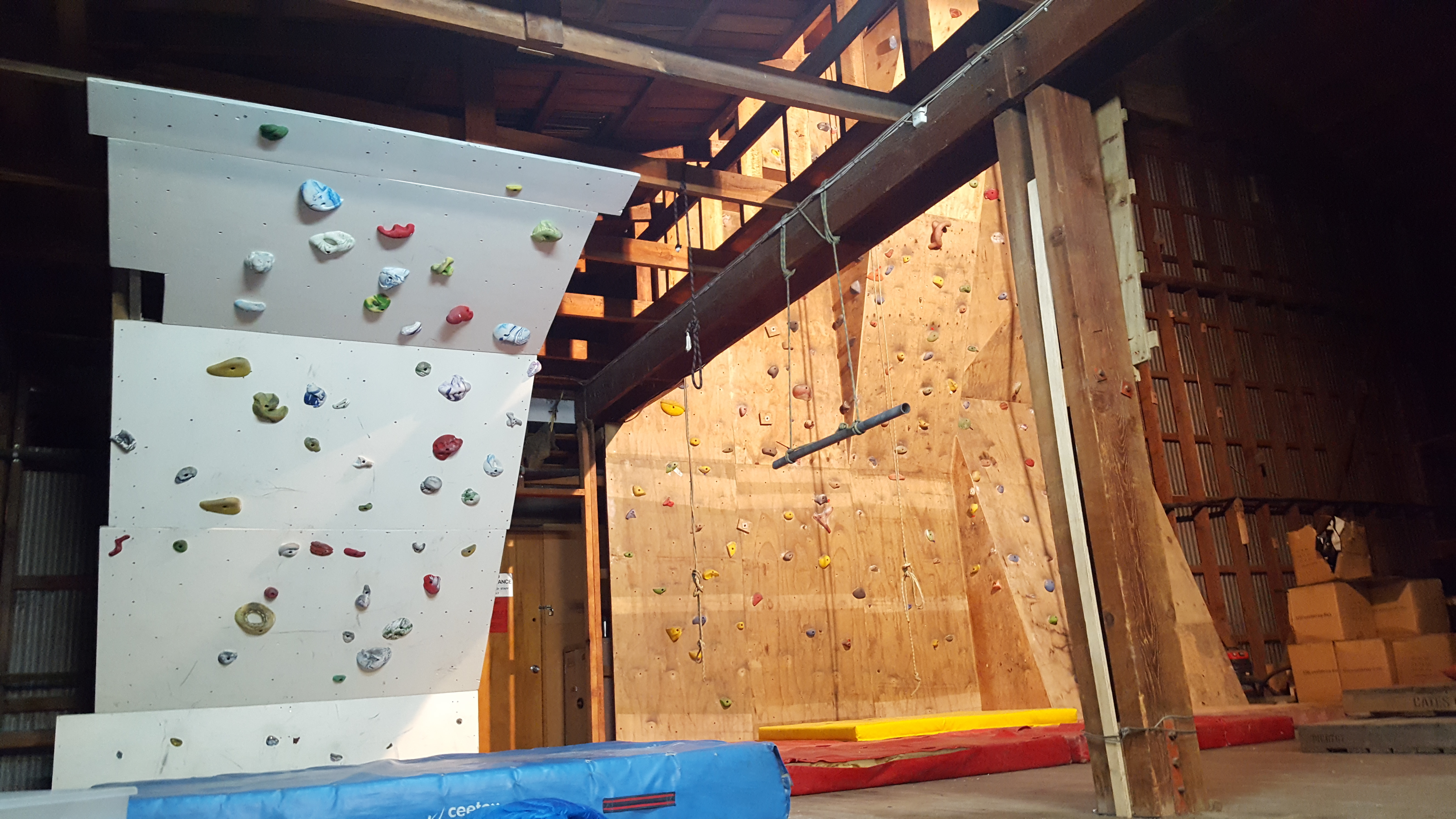 Excited to exercise after days of thumb-twiddling, we put on our harnesses. As Stuart reached the top of the wall, an uncharacteristic string of profanities preceded an abrupt order: ‘Get me down!’ As I belayed him to the floor, I could see Stuart cradling his right arm with his left. Even his thick fleece couldn’t hide the characteristic squaring and drooping of his right shoulder. As he reached the floor, Stuart confirmed the news I had started to suspect, ‘It’s out mate.’ Stuart is no stranger to shoulder dislocations. His left shoulder has required surgery to stabilise the joint after dislocating it several times previously. Never before had his right side shown any signs of weakness. This time, a relatively inconspicuous climbing move had sufficed to painfully dislodge the head of his humerus from his shoulder-blade.

Frantically, I gathered his belongings and untied him from the rope. Another climber, more familiar with the local area, informed us there was a medical clinic in town – we could commandeer the ski patrol jeep to get Stuart there. Fuelled by adrenaline, ever increasing pain and a growing list of expletives; Stuart bolted from warehouse to make the journey on foot. As those who have dislocated their shoulders will attest, the longer one has to wait before receiving help, the more pain one feels. On arrival at the clinic, one nervous minute blurred into the next as simple manoeuvres failed to reduce the limp arm back into place. Thankfully, a generous dose of intravenous morphine and a strong sedative had decreased Stuart’s pain by the time a further manoeuvre gave rise to a relieving ‘clunk’. Owing to being highly sedated, Stuart has no memory of this moment. Those present, myself included, are unlikely to forget it in a hurry.

Stuart spent the next few days recovering at the house of the Medical Rescue doctors, who had kindly offered for him to stay as long as needed. A course of physiotherapy was immediately planned to strengthen his weakened joint, but this would be a gradual process. I trudged back to the van. Sleep was not to be forthcoming that night. The ramifications of the day’s events on Stuart’s trip were cruelly highlighted by the emptiness of the van which, hours before, had been our safe haven from a storm which raged for two days.

On the staff bus the following morning, the mammoth effect of the storm on the mountain – and the ensuing marathon effort of the road staff and ski patrol to allow public access – was staggering to behold. Vast snowdrifts towered above the buses which slowly ascended to the resort. Thick snow coated every slope down to the very base of the previously dusty access road, which had required excavating along it’s entire length. The summit basin had required continuous monitoring and explosive avalanche prevention, windswept ice had to be clubbed from the chairlifts and a metre of fresh snow was redistributed around the slopes. Despite the new, foreboding character the mountain had taken on, a huge collective human effort had weathered the storm. Mt Hutt would be open for the last day of the weekend! 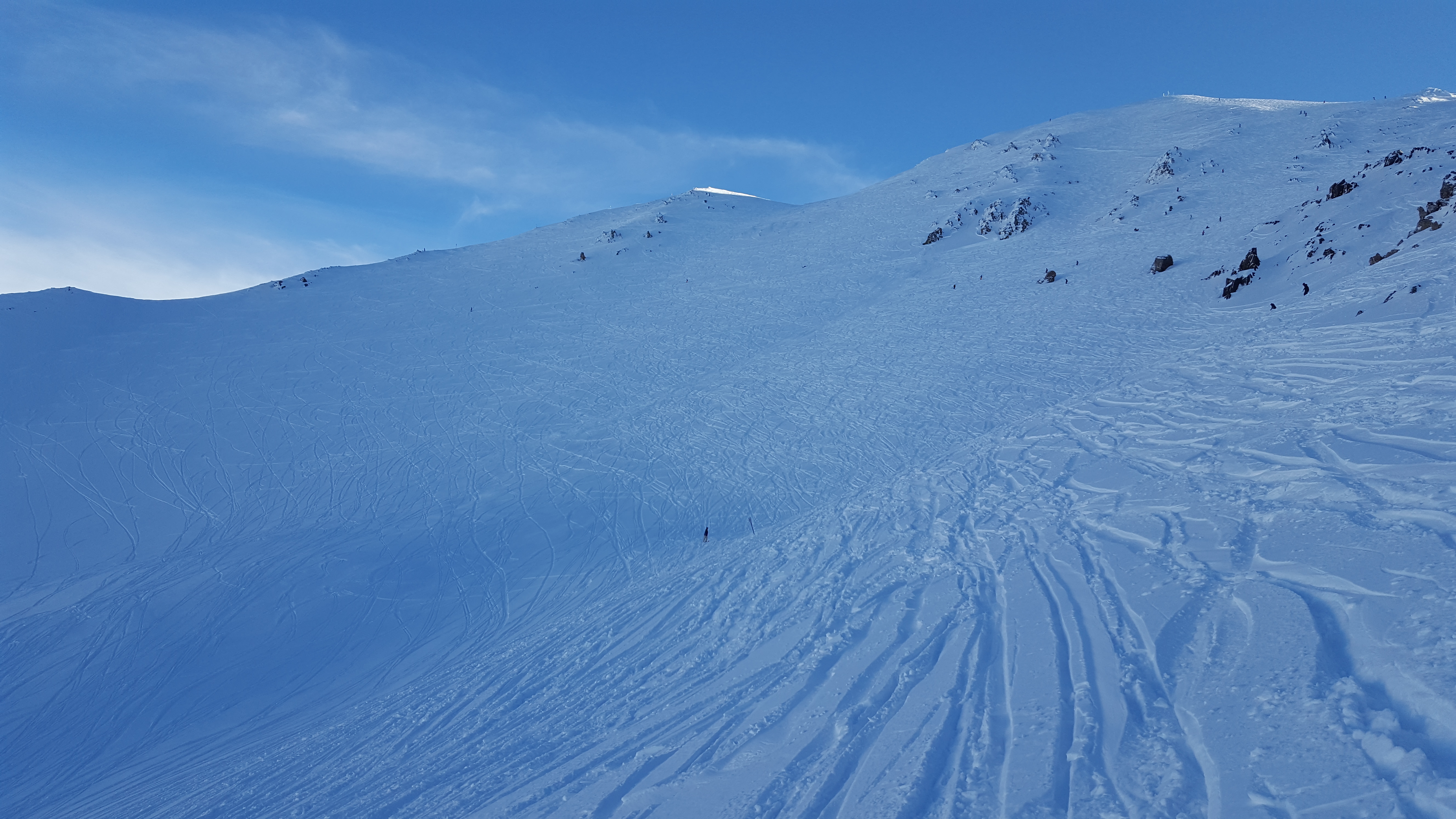 The following day, the mountain was abuzz with whoops and cheers from delighted powder hounds putting down fresh tracks in deep snow. Skiing powder, I discovered, is both less and more forgiving than skiing on a pisted trail. Any imbalance in technique threatens to sink the tips of your skis into the snow, quickly stealing your forward momentum and throwing you further off balance until, inevitably, skier meets snow in a sometimes lengthy and often comical battle. Thankfully, I’ve also found the landing to be soft, a luxury which groomed hardpack fails to offer.

Despite the many falls on my part, the thrill of successfully linking my first few turns on the soft stuff cannot be understated. The fizzing of deep snow under-ski and the plush, cushioned feeling of rhythmically shifting your weight to float down an untouched section of mountain felt magical. The allure of ‘fresh tracks’ and ‘pow days’ was no longer an alien concept to me. I was instantly hooked. 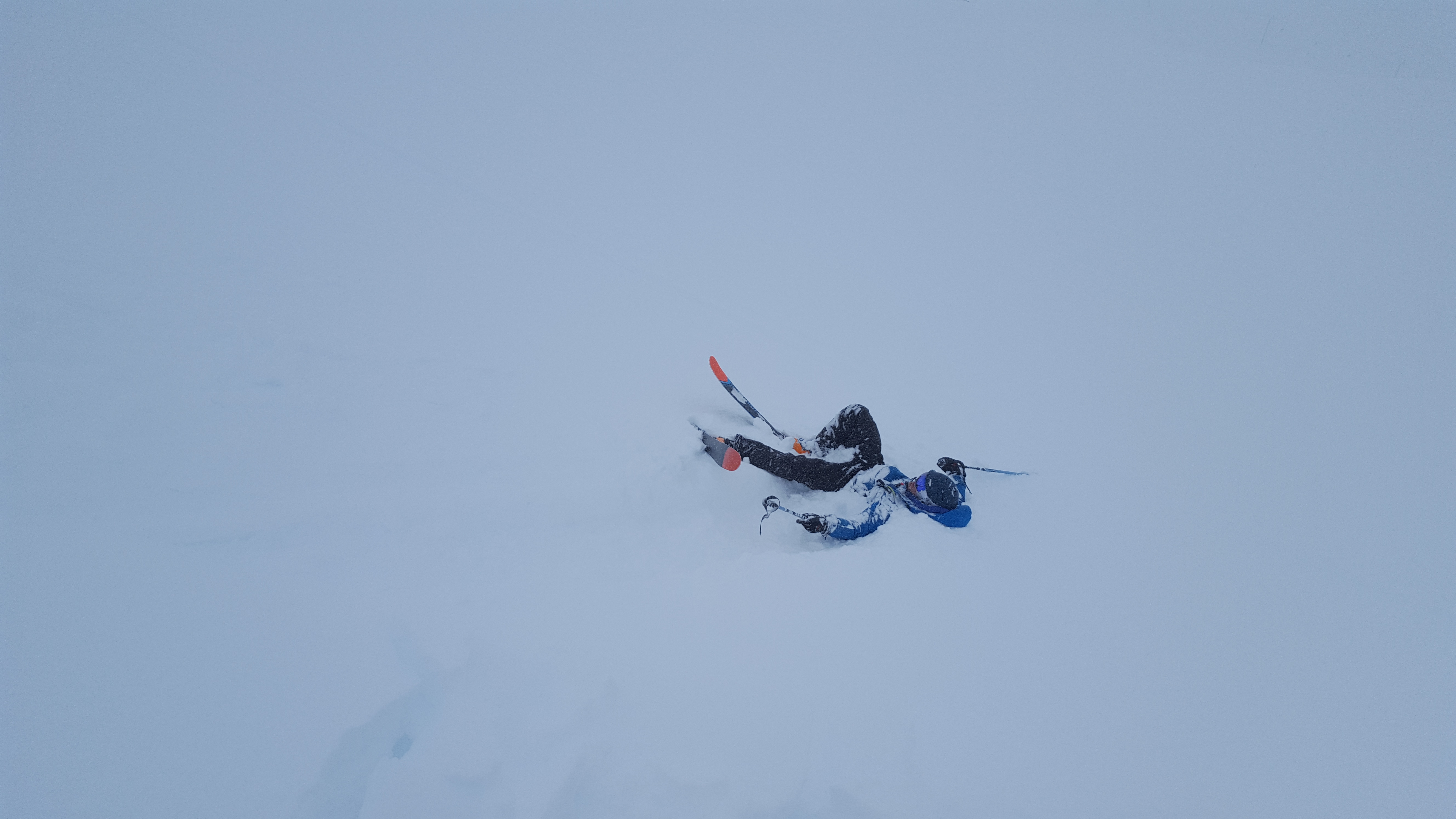 Later on, I was greeted by Stuart at the campsite. Following a surprisingly positive physiotherapy appointment, he had decided to move back into the camper, and relayed me his plan for rehabilitation. After a week of recuperating and light exercise, he would be able to re-join the medical team in the mountain clinic and ski gently once he felt comfortable! Whilst being gutted that our plans for the trip may have to change slightly, he remains upbeat and stoic in face of the adversity which accosted him!

Very few patients checked into the clinic in the following days. The mountain is generally much quieter midweek, and it wasn’t infrequent for there to be no patients to see in the med-room. One morning, I commented on this trend to the clinic nurse, and was met with swift rebuttal. ‘Don’t mention the bloody ‘Q’ word or you’ll anger the trauma gods!’. In these quiet periods, I try to make myself useful at ski patrol dispatch. This is a cabin on the summit of Mt Hutt resort from which the response to emergencies on the slopes is co-ordinated. I was recruited by ski patrol to help complete some tasks outstanding from the weekend. Ski lift tower pads needed to be dug out of deep snow, and perimeter fences which had vanished in the storm needed to be replaced.

Something which I ought to mention at this point is the complexity of communication within the working environment of a ski field. Lift crew, terrain park crew, maintenance, medical rescue, ski patrol and admin (to name but a few!) must overcome the difficulty presented by the geography of the mountain area to safely keep the resort running. As such, all staff are given a radio with which to communicate. A multiplicity of signal frequencies and call-signs have been implemented so that important information is always shared with the relevant and necessary teams. Throughout the day, work chatter never ceases to flow from the handset of all staff members in the resort. However, one call trumps all others in this torrent of conversation.

A code 3 refers to a possible life threatening emergency on the slopes, which necessitates the immediate presence of the medical rescue Doctor. Despite my preconceptions, the incidence of the Doctor attending a medical call on the slopes is very rare. Ski patrol are trained in triage and immediate assessment of patients, and often provide the quickest access to healthcare by skiing patients down to the clinic in a ‘rig’. As such, when a code 3 is called, everybody stands to attention.

It was on one of the aforementioned ‘quiet days’, that I experienced my first code 3 call. An unresponsive woman had been found by ski patrol after falling on the slopes. Head injury and wrist fractures were suspected. The response was precisely coordinated and staggeringly quick. Within a few minutes, a snowmobile arrived outside the clinic doors to collect the doctor, who had already discussed a plan of action with the nurse to equip and ready the clinic for any eventuality. I assisted in preparing a bed space, setting up monitoring machines and readying nitrous gas pain relief as the nurse prepared drugs and IV access equipment.

Once in clinic, the lady became more responsive, and detailed the events of her fall. Upon clinical evaluation, it was decided that the probability of a head injury was minimal. Unfortunately, deformities in both forearms revealed that she had indeed broken both wrists, and required urgent helicopter evacuation for x-rays to be taken at the nearest emergency department, 90 miles away in Christchurch. Given the challenges posed by medical emergencies taking place in isolated mountain environments, the cohesion and preparedness of the ski patrol and medical rescue team is paramount to providing the safest possible area in which members of the public can enjoy skiing.

A short amount of time has lent valuable perspective to the events of the previous week. I have seen medical emergencies in both my role as a medical rescue student and as a travelling partner and friend. It has been both an intense and exhilarating mix of new experiences and learning opportunities. I am both thrilled that Stuart can start to make the most of this trip again soon and amazed at his ability to remain positive.

Hopefully the rain will subside alongside my use of tired clichés in the coming week. I’ll keep you posted…