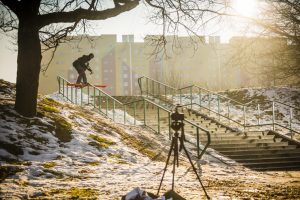 You don’t have to go to the mountains for good skiing if you’re creative and possibly a little crazy, like the brilliant Dan Hanka

You might not think of this pretty city for skiing, but I was filming for Faction’s web series last winter and this was the first stop. As you can see from the photo here, the snow situation was awful, but the rails were very good! The police were no problem, unlike some places, and wow, the people have tremendous heart. There were about 20 all standing and cheering as another team skier, Tom Granier, and I had a session here.

A cool place as it’s so, so pretty. Like London you have a cool city and a real atmosphere. Plus they get more snow than the UK. I’ve skied here when the snow wasn’t great and thoroughly checked it out. It’s a good city for rails and ledges to slide and I’ll definitely be back if the weather is right to film a web episode this season.
I fancy doing something in the Old Town that looks totally different to the usual ski shot. Maybe a wall ride…

You may look at places on ski films like Detroit and not be keen to go there yourself. It might look pretty sketchy and dangerous before you even ski! But London is perfect. I was here for iF3 this year and if you’ve got the snow there are some real good spots. The pick? Probably on the Thames. I like the idea of a wall ride and there’s definitely some things that are hittable and possible.  night shot, with Tower Bridge in the background, would look pretty good.

My hometown, so where better to go skiing? It’s close to Czech’s highest mountain, Krkonose (1600m), but I’m always waiting for snow down below too. And from autumn onwards I’m walking around the buildings planning and getting excited about what I can do. The town centre is historical, so that means great walls and good rails to try. I’m not hitting much now – just walking and watching – but soon I’ll be skiing it!

Eastern Europe is so different to everywhere else in terms of look and feel; I really want to ski more of it. Slovakia I’d like to try, but… Moscow would be better! And Red Square would be pretty interesting, too. I doubt anyone’s ever skied there, right outside the Kremlin. It’s pretty flat and empty for all those military parades they
do, so you’d need lots of snow for the run-in and rails and everything doing. But I think they have the resources, right? And Putin likes skiing! FL

Dan Hanka was filming on the Faction Collective web series – see it at
www.factionskis.com