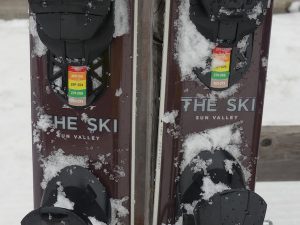 The inspiration comes from Sun Valley, if not the weather on the day this was taken

Scott have been making skis for decades, which is one of the reasons why this model harks back through the years. Back then the first model of The Ski was innovatively delivering all-mountain ability from a single model. Nowadays that’s less of a story; the go-anywhere ski is the go-to concept for most skiers.

Turning this into a must-have, or at least a should-try, is what Scott have got right in the second generation The Ski. Oddly, given all the hoo-ha  about this, when I first popped a pair on a trundled off down the piste there was a moment of ‘is this it?’. The ride was very smooth which isn’t exactly what I was expecting because the skis Scott has delivered which we got excited about were lively as hell. These deliver a damped ride and seem to behave exquisitely on piste, despite being low-90s wide. Time to explore the spec.

There’s a full wood core with a cunning elliptical upper, an elongated nose sporting a little rocker, and a double radius sidecut. The ride quality comes from the first bit, because everything else is perfectly standard (if pleasingly bang up to date) tech. So, the curved topsheet stiffens the ski along its length and the added material delivers the damped ride. It also delivers more torsional stiffness which is apparently a good way to get edge grip. I went skiing; it works. 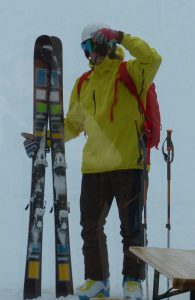 Turn-in is rapid for a semi-fat ski and as the edge is found, The Ski feels sucked into the turn and locks down. Everything from hardpack to slush is dismissed in tight as you like carves with eager flicks of the knees. This is the multi-radius tech in action, working hard. Now time to edge off into the crud. As regular readers know, stiffer skis make fine crudbusters and all that’s needed is good response to adjust the direction snappily. I put some grunt into The Skis’ tails and they drove back hard and fast, making me do the running to spin them around.

Verdict: Insanely adaptable, sound value, a ball to ski though it responds best to a bit of work.