ARCTIC 12 documents Freeride World Tour veterans Jackie Paaso and Reine Barkered and IFMGA guide Erin Smart and Benjamin Ribeyre as they set out on a huge expedition to be the first group to summit all 12 x 2000m+ peaks in the Swedish arctic.

Travelling hundreds of kilometres under their own power, the trip took the crew more the 21 days, and saw them encounter unexpected environmental and human challenges along the way.

The expedition group set out to travel by human power – using sleds, cross country skis and ski-touring set-ups – to connect the 12 tallest peaks in Sweden and discover the least known skiing the Scandinavian mountains have to offer.

The 12 peaks lie within the Sarek National Park and Stora Sjöfallets National Park. Up until 2016, it was believed that only 11 peaks over 2000 meters existed in Sweden. However, with glaciers melting and the environment changing, it was upon remeasurement that it was discovered that there are actually 12: the newest addition to the list being Sielmatjåkka at 2004 meters.

If successful they could be the first crew to climb and ski all 12 peaks in one go during winter conditions.

SAUVATGE – WILD IN THE PYRENEES 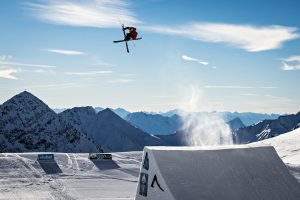