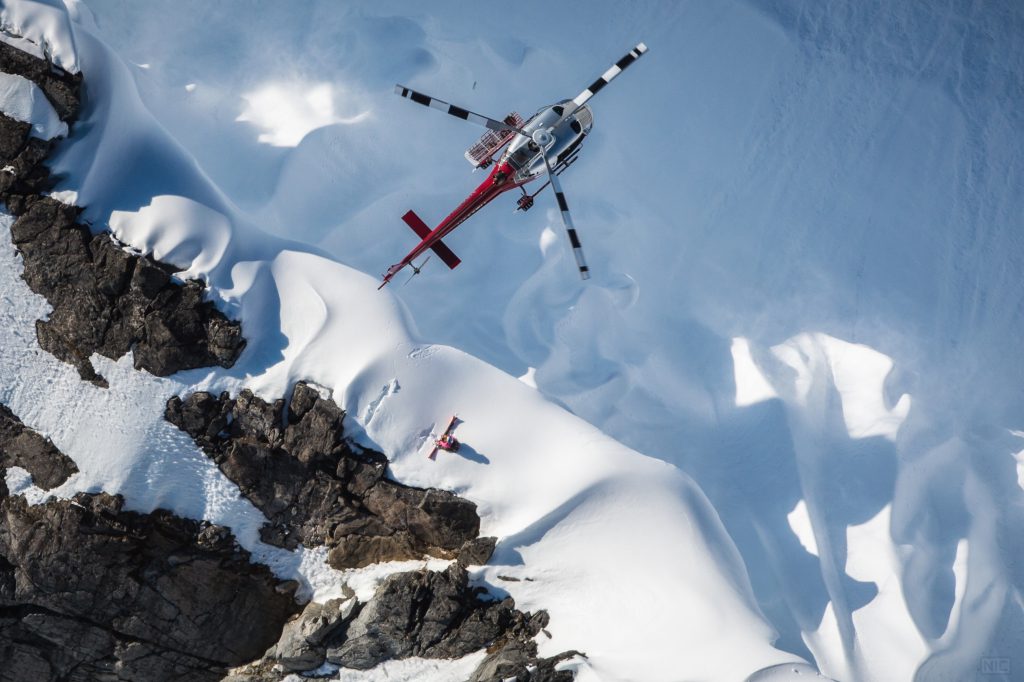 The weather gods didn’t want me to reach Valdez. Storm Emma had rolled into the UK causing chaos. Thankfully Heathrow was clear of snow, but it didn’t stop Virgin cancelling my flight the day before I was due to leave. Apparently it wasn’t Emma that was the problem but storms hitting the US. At least I was going to get into Anchorage the day I’d planned (Friday), but via Minnesota rather than Seattle. From Anchorage I was to take a connecting flight to Valdez. But before I’d even left the UK they cancelled my early Saturday flight into Valdez and rebooked me on an afternoon flight, which left me with time to kill.

As luck would have it the Saturday was the start of the Iditarod, the world’s greatest dog sled race. If you don’t like seeing the skins of small and not-so-small furry animals draped across people then this is probably not the place for you. The dogs were bouncing around in their harnesses barking with excitement. It was a welcome surprise to catch the start – and made up for much of the stress of the prior couple of days just trying to get to Alaska. 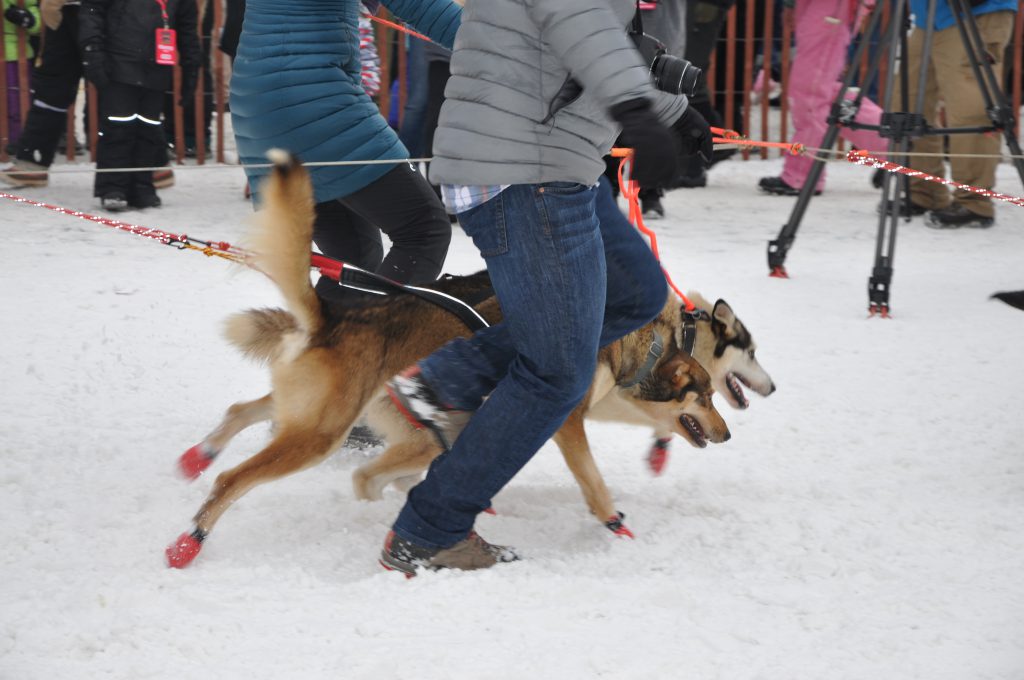 GETTING INTO THE GROOVE

I’d spent a long time researching where I wanted to heliski. This was one of my only chances, dictated more by the availability of sufficient holiday than anything else. You can heliski in Italy, Switzerland, Sweden and Iceland, all close to home, but Alaska was top of my list. Partially due to the recent ski films showcasing the steep and exciting lines that Alaska has to offer; and partially due to Gregg Stump’s 1991 film Groove Requiem in the Key of Ski.

Stump’s final sequence was a visit to Alaska, right at the start of helisking in Valdez. The team skied amazing snow in a stunning mountain range musically backed up by Seal’s Crazy. I was hooked. Though maybe I should have noted that they were trapped in their lodge for days by a heavy snowstorm; a portent of what my own experience would be…

From Anchorage it’s an easy 40-minute ride to Valdez, or would be if the planes were flying. Sitting around the terminal for my 5pm Saturday flight, Ravn announced a flight delay due to high winds. My new Sunday 11.30am flight was also cancelled; I rebooked for the 5pm flight and eventually we all trooped on board – a mix of miners, Valdez locals, heliskiers and Native Americans.

I spent a lot of time researching who to ski with. Chugach Powder Guides operates out of Alyeska resort, and on the Friday when I arrived in Anchorage I’d looked longingly at their heated minibus as it picked up clients from outside the airport. But I shook off my envy, knowing that I’d made the right decision in choosing Dean Cummings’ H2O Heliski out of Valdez. Founded in 1995 by Dean and the late Doug Combes, it’s the oldest Alaskan heliskiing operation, with a licence for the largest amount of terrain in Valdez.

Valdez is a small town of 4,000 and, as we landed, it was literally buried in snow. We were greeted by the H2O team and some of the skiers we’d be sharing the week with in the small airport building. They’d driven in the day before when their flight had been cancelled; it had cost them well over $2,000 for the taxi but at least they’d got to ski that day. 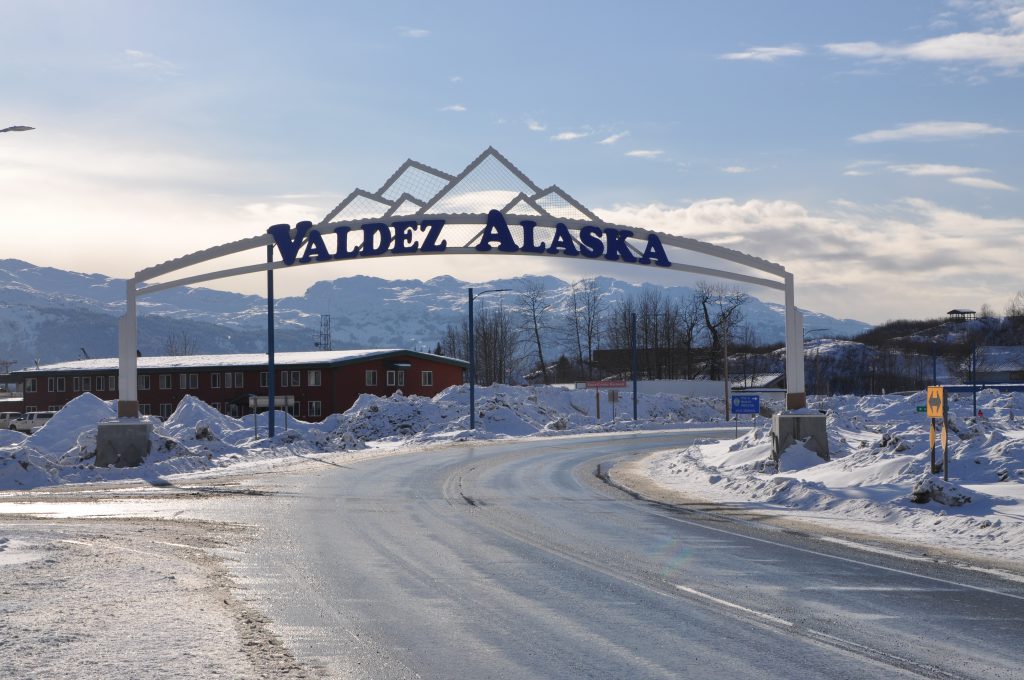 ONE MORE SLEEP… OR NOT

Much of Alaskan heliskiing is in glaciated terrain, and on arrival at our hotel the H2O team briefed us on the risks. The snow is maritime snow, not as light and fluffy as the dry US stuff. It means it’s stickier and will hold better on steeper terrain. Because it’s steeper there is more sluff; enough to knock your legs away. So we were told to ski spines, or keep moving diagonally so the sluff would fall away from us.

We also went out to the heli to practice loading and unloading. It was getting exciting and that night I checked and rechecked all my equipment. But there was bad news at the 7.30am briefing: the high winds that had prevented us getting in had blown the snow off all the peaks. Fortunately, with their licence, H2O can go deep into the Chugach to find snow, and so we were told we’d be returning to the area the other guys had skied the day before. The heli could take four skiers, and to save rotor time they flew one group straight from the airport while the rest of us would be picked up from a car park staging point in Thompson’s Pass. This would reduce flying time and speed up rotations. The small Eurocopter we used was nimble and we had an excellent pilot; we threaded our way through the peaks.

The guides mark the landing zones with twigs to make it easier for the pilots to see (their backpacks are full of them). So we all hurried out and squatted in front of the heli while the guides removed our skis and packs.

The area we were going to ski certainly wasn’t the steep spines that I’d travelled to Alaska for but a large glacial plane. At least the snow was good. As we worked our way down it became a little breakable, but we stopped at our pick-up point before it got unpleasant. Our guide didn’t like the snow so we switched to the other side of the peak where the snow was creamier. As we skied we could see the indents where crevasses lurked, keeping well away. After four runs the weather started rolling in and we beat a hasty retreat back to our staging point, the pilot swirling the ’copter over a young moose as we came in to land; the wildlife is something else. 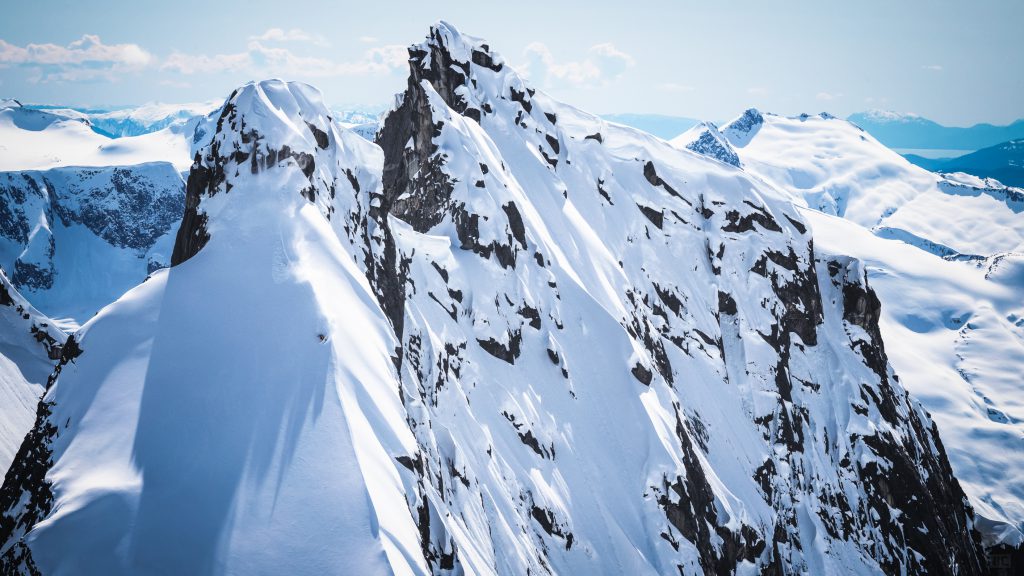 The next day was a washout with low cloud and poor visibility. We were on standby most of the morning, but by lunch all flying was cancelled. To keep the disappointed skiers occupied the team organised a visit to a local salmon ‘ranch’; interesting in a school trip sort of way but not heliskiing.

The following day there was still no flying, so we went cross country skiing. The local town council had invested in some new Rossignol kit that could be loaned for free, and had also marked some interesting circuits.

The next day the same story, so we headed out to a frozen lake with an iceberg that had carved off the glacier and climbed it. It was amazing climbing the blue face of the berg. To be honest I was pretty poor, but I kept going until my forearms burned. I’d like to say that the next couple of days we got to ski, but nope: the weather was too bad. A couple of the guys tried to organise a trip with another operation but they weren’t flying either. 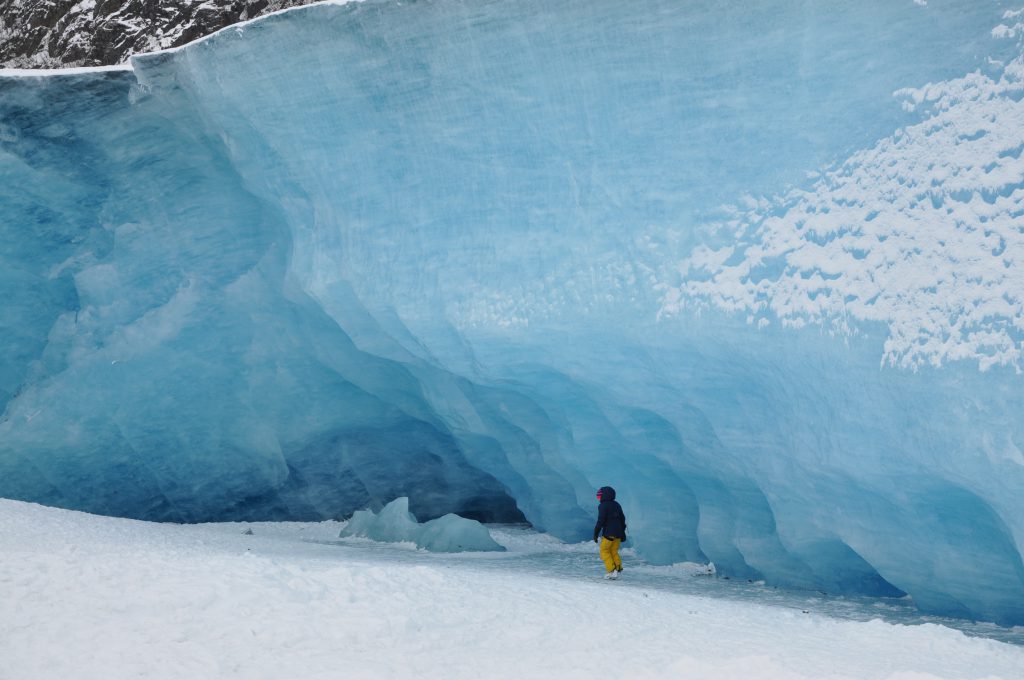 The next day dawned bright and clear – it was our last morning and it looked like we’d get to ski some of the fresh snow that had fallen over the preceding days. The routine was that the team would put up the day’s plans on a board in the hotel corridor around 8am. But there was nothing there.

A little later Dean arrived – the first time we had seen him that week. He told us there would be no skiing due to the weather, as although it looked fine outside it was going to close in again. We all agreed we would ski the local rope tow, which opened every Saturday, so Dean went off to organise it. Shortly after we learned that all the staff except the pilot and his mechanic had quit that morning. Even if the helicopter could fly there was no possibility of heliskiing.

Now, rightly, everyone got pissed off by this and there was plenty of talk of having it out with Dean. Muggins here ended up being the one to call him out over whether the staff had actually quit, and whether that was the reason we weren’t flying (he insisted it was). Funnily enough we decided not to ski the rope tow, and if the weather really was closing in not to rely on the unreliable plane service.

All but one of us climbed into a chauffeured minibus we’d hired and got the hell out of Valdez for the seven-hour transfer to Anchorage. The road was amazing and we pressed our noses against the windows looking at the amazing lines the Chugach had to offer.

The weather did roll in but not until later in the afternoon. I am certain that if the staff had been available we could have flown, but we’ll never know.

Our minibus arrived at the airport around the same time our flight would have landed. The flight was a bit of an anti-climax, other than a fairly long stop-over in Seattle, and I had plenty of time to reflect on the last week.

I thought about telling you how much the whole thing cost, but then my wife might see it and I don’t particularly want to have that conversation. The reason why? I’ve got the bug. Despite the lack of skiing, the whole experience was amazing. The animals, the people, the scenery, the two hours or so spent on the equivalent of an off-piste blue run, and all those lines that if only we’d been a little lucky we’d have been able to ski…It’s very addictive and I reckon in a couple of years I’ll have to try it again. Perhaps not with the same heliski operation mind you. 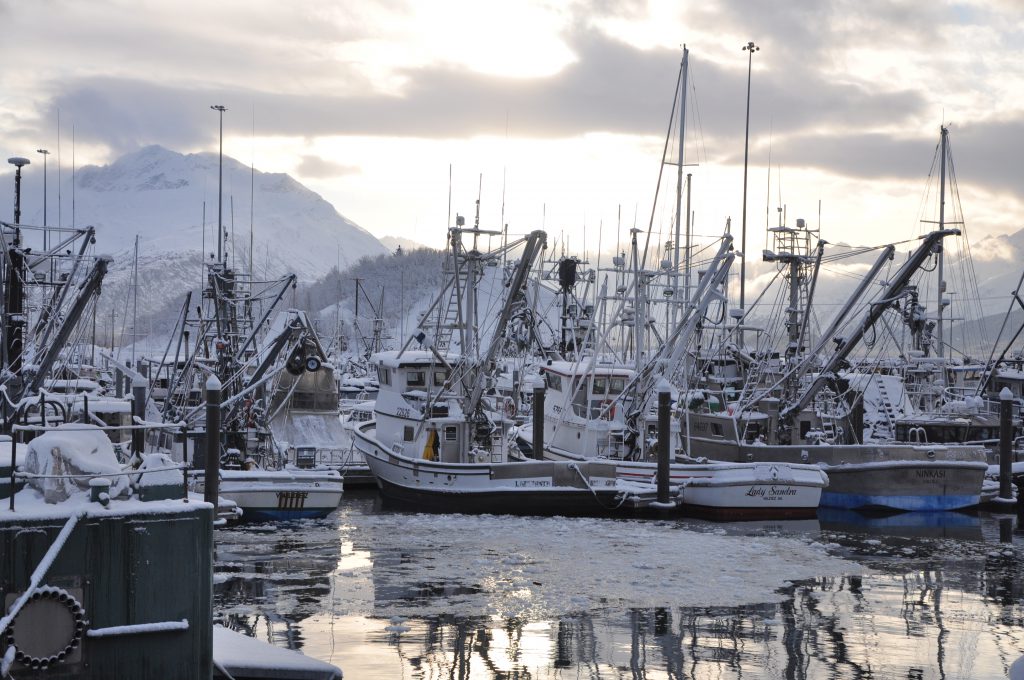 Fly to Anchorage; from there drive or take a transfer for the five-hour drive to Valdez, or hop an an internal 40-minute flight with Ravn for around $320. Or you can stay local and heliski at nearby Alyeska Resort.

SIX PLACES YOU CAN GO HELI-SKIING IN EUROPE

HELI AND CAT-SKIING: ARE THEY WORTH IT?

Everything you need to know about planning a heli-skiing trip