No one on planet skiing appears to have more fun, or better adventures (exploding volcanoes or North Korea anyone?) than the former Freeride World Tour winner. This is a tour of his home turf.

For 30 years now: maybe I should have another 30th party!

Why base yourself in Verbier?

I met Beanie (The North Face team-mate and Xavier de le Rue’s wife) in Wanaka, and she invited me out to Verbier, claiming it as a freeride paradise. So I came out in 2006 and have been doing seasons here since. The lift accessed freeride terrain is second to none, with some of my favourite mountains, like Mont Gond and the infamous Bec des Rosses where they hold the finals of the Freeride World Tour. Getting to run laps on these mountains has done so much for my skiing. Plus Chamonix is just an hour away, which is incredible.

My first season I was so poor, I was on my friend’s couch for six weeks, with two other broke Kiwis doing the same. We couldn’t afford lift passes so we borrowed them off English army boys who’d visit for a fortnight and then leave their passes behind. I remember competing in the Verbier freeride comp in 2006 with a black moustache drawn on my face, which I couldn’t get off for days!

How many days have you skied Verbier?

Man, I am not so hot on the old counting thing. I’m all about quality over quantity, but it would be a whole bunch considering the 12 years I’ve been here.

Tell us about your best day ever skiing Verbier.

There have been a whole bunch of best days out here. One of my favourites was touring out to a hut on top of a mountain in the backcountry. We skied a few lines on the way and arrived in time for sunset beers and a fondue around the fire. Then toured across a frozen lake and up to this huge north wall, full of blue ice and super steep.

Well, I have had a few good wrecks. I have been flown out with a suspected broken back, another time with a suspected broken neck – thankfully both weren’t broken – and have had to evacuate at least five friends. It’s a pretty wild place for sure. The (injured) back involved tomahawking down a line and bouncing off a rock wall. None of the crew saw and skied off. I had to drag myself out of the hole I made and down to ski patrol, who flew me to hospital. I spent the afternoon there before they cleared my spine for fractures. I spent three days unable to get out of bed while my mum, who was visiting, gave me acupuncture and physio treatment. The fourth day was the FWT finals so I finally got out of bed and slowly climbed the Bec, as I was in the running for the overall FWT final. As soon as I made two turns I realised my body was rubber and pulled out of my line, but near the bottom I was so mad that I couldn’t properly compete I hit a pretty big cliff, backslapped hard and hurt my back even more.

I have never been chased by ski patrol, that’s not really a thing that happens here, the attitude is pretty much ‘do whatever you want’, if you mess up they’ll patch you up and ship you home. I love that the responsibility here is on you to make smart decisions. It’s a really easy place to get into trouble if you’re not careful.

Which is your favourite Verbier ski lift?

My favourite lift would have to be Mont Gelé – there are so many fun lines and cliffs it’s unreal. The showboat lines are amazing and I love scaring the punters by climbing   the fence and dropping in right by the lift.

Tell us something we don’t know about Verbier

The awesome hut tour I mentioned, off the back of Mont Fort, that takes in all the 4 Vallées.

What’s good to eat in Verbier?

Best is still the Farinet après bar. The place goes mental, packed wall to wall with people crowd surfing; babes pouring liquor straight in your mouth via shot ski, everyone singing and just sending it to some great live bands. What’s not to love?

The local Finns used to have this superstition that if no one cheered when the Jumbo lift swung over its top lift tower, they had to go home and start drinking immediately, no matter how good the day was. I have no idea what it was based on, but thought it was pretty funny.

Avoid the school holiday queue to get up the Medran lift by going early or waiting until mid-morning, or else you could queue well over an hour.

Sam Smoothy is a member of The North Face athlete team. Visit thenorthface.co.uk or follow @the northfaceuk to keep up to date with all their athlete expeditions.

Battle of the ski resorts: Verbier 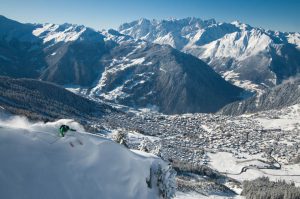 A local’s guide to Verbier 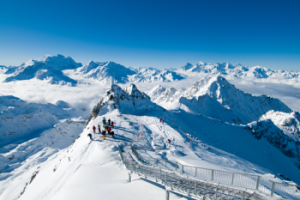 Did Sam Smoothy just ride the FWT’s best ever line?