In Finnmark, a mountainous county in northern Norway, Tore Karlstrom, a 53-year old ripping telemark skier is a local legend. This dairy farming ski guide embodies the soul of skiing in a region of Norway that overflows with a grassroots skiing vibe

I live on a farm in Longfjordbotn, population 20 max. This small village has been my home since 1991 and sits at the head of Longfjord, in the county of Finnmark in northern Norway. My grandparents first settled here and began farming before World War II, but they were forced to leave temporarily when the Nazis retreated near the end of the war and burned everything – farms and machinery.

Our family came back and now my brother and I are third generation dairy farmers. My brother’s passion is dog sledding, mine is skiing and I guess that’s why they call me the “off-piste bonde” (‘bonde’ means farmer in Norwegian.) Being a farmer and a skier in Longfjordbotn is kind of a dream. I can put my skins on and ski right from the front door of the farmhouse across pastures and up into the mountains. The peak right behind the farm is called Storfjellet, but it’s also known as ‘Tore’ – named after me.

There are couloirs, big lazy rambling ridges, steep bowls and faces right in my backyard. There’s also great tree skiing in the forest that has been thinned and gladed for reindeer habitat and migration. Throughout the winter I do about 12 to 20 days of ski guiding because I love skiing and skiers are usually very nice people. It’s a subsidiary income for the farm. I also teach some avalanche courses. In total I ski between 80 and 100 backcountry days a year plus another 14 days of lift-based skiing.

We host visiting skiers throughout the winter and when you stay with us you’re staying on a working farm. One section of our farmhouse serves as a guest lodge. There’s a set of moose antlers above a woodstove and a long wooden table where we eat family-style meals  – if you’re lucky, some whale or reindeer meat. The morning ritual for me in winter is pretty simple; get up and milk the cows, maybe fix some machinery if it needs it, then plan my day in the mountains if the weather and conditions are on.

Finnmark is relatively unknown as a skiing destination, which is what makes it an amazing place. Most skiers are familiar with the Lyngen Alps in the neighbouring county of Troms. The Lyngen have received a lot of attention in the ski media, so people tend to drive right through Finnmark without even stopping. The mountains in Finnmark are perhaps a little less striking than the Lyngen Alps – the summits are more rounded and not as jagged – but there are many, many unskied lines. That’s why I love it. It’s a sparsely populated region as, with so few skiers, most people tend to stick to the easily accessible roadside stuff. However if you’re willing to ski a little farther up the valleys and ridges, or boat across the fjords, you’ll find lots of potential first descents.

Let me give you an example of why I think Finnmark is special. Last winter I skied a new line with some visiting Canadians, next to a line called Nedre Tverrelvtind that was skied for the first time last year by some French men. You can see this couloir easily from the road where we parked and it takes less than an hour to skin up to the base of it. However nobody has bothered to ski it before because it terminates in a rock wall and there are plenty of other chutes to ski with straightforward entrances.

This is how good the roadside riches are here. After a 20-minute drive from the farm we started skiing at the crest of the low pass connecting Jokelfjorden and Bjurforden. On either side of the road lie 1800 metre summits, with entertaining ridges, wide open bowls and splitter couloirs. The light was flat so we wanted terrain with a little more relief and features for reference. That’s why we were drawn to a pair of narrow couloirs arranged in a ‘V’ and splitting the steep face of Tverrelvtind Renna. The line on looker’s left was the one that had never seen a descent, but we opted first to ski the Frenchmen’s line, Nedre Tverrelvtind.

Half an hour of easy skinning brought us to the fan of snow at the bottom of the chute. When the snow got firm and too steep for skinning, I stomped out a platform beneath a boulder and we switched modes, strapping skis onto packs. As we bootpacked upwards into the couloir, rock walls on either side gave the illusion of sudden exposure and steepness, but my clinometer showed it to be barely 40°. It was a low snow year, so rocks at the top of couloir blocked the narrow access to the ridge top. We decided to descend from about three-quarters of the way up the couloir.

After a few hundred vertical metres of steep, no-fall zone, corn skiing we were back at the base of the chute, looking at the as-of-yet unskied couloir angling diagonally across the rock face to where it meets the bottom of the line we just skied. We started climbing. Shafts of orange and purple light pierced a hole in the sky and illuminated Jokelfjorden in the distance.

After another half-hour of steep bootpacking, we ran out of snow where a steep rock face capped the couloir. Each of us found a level spot among the rocks where we fumbled to click into our bindings. From this airy perch, the line we just climbed looked sketchy but as soon as I made a few turns I relaxed. A wind scoop of snow skiers’ right allowed us to dump speed, even though the snow was hard; hard enough that a fall would have been difficult to arrest. I remember thinking, ‘we’re too old for this’. When we regrouped at the bottom, I decided to call this couloir ‘The Canadian’.

So in less than a four-hour round trip from the farmhouse in Longfjordbotn, we managed to tag a couple of couloirs, one of which was a first descent. That in essence is skiing in Finnmark. The opportunity for adventure here is huge.

After a day of skiing, I head back to the farm to tend to the animals. If we have guests staying with us, or some skiing friends, we’ll have some beers, eat some reindeer stew and plan another day of skiing. I might drive into Alta with my wife for dinner or to hear some live music. Then it’s off to bed, to be up early to do it all over again. 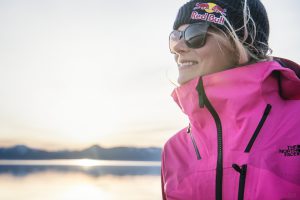 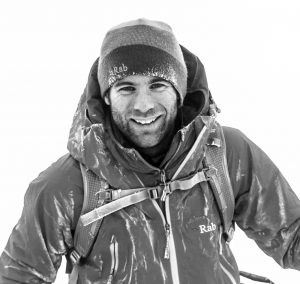 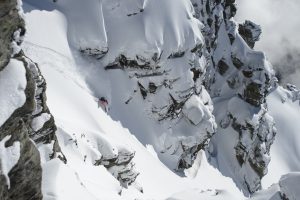