Earlier this winter we hopped over to ISPO in Munich to check out all the new gear for next year. If you’re looking for a brand spankin’  freeride and/or backcountry rig to launch your 2021 season then you’ll be pleased to know there’s heaps of new skis to get excited about.

From lighter, more playful and even more powerful freeride rigs to entire new touring-specific ranges from some of the industry’s biggest brands, here’s a sneak peek of what’s to come next winter. 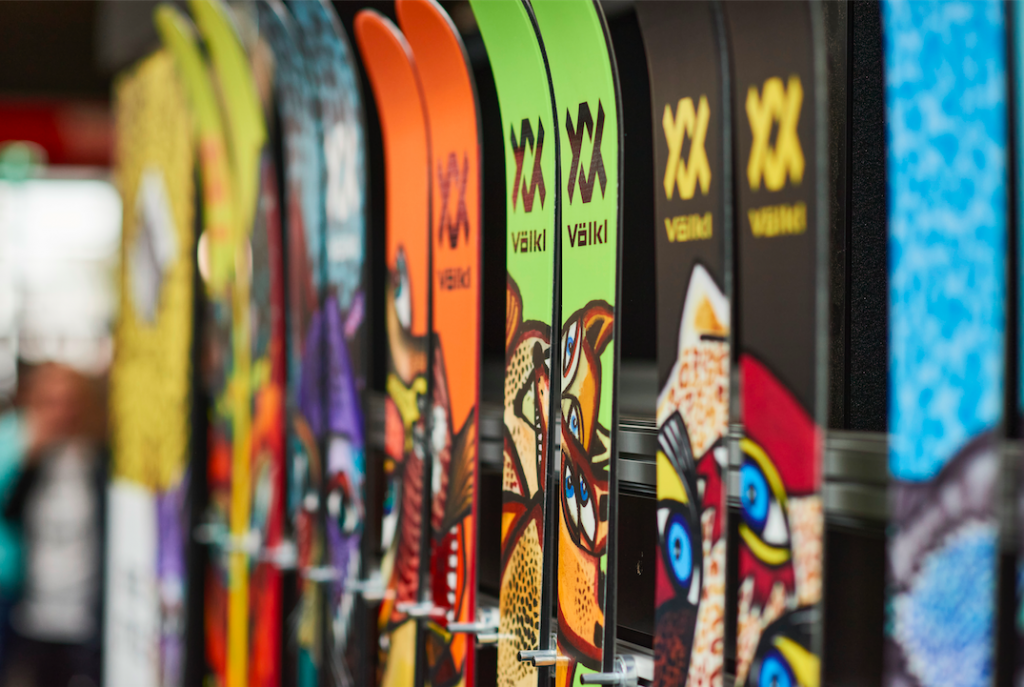 To keep things simple, we’ll work through it all in alphabetical order….

Armada have put a couple of their freeride models through a rigorous weight loss and strengthening regime with impressive results. The women’s-specific super fat ARW 116 VJJ gets a new ultra lightweight core for 2021 that sees it’s overall weight reduced by 19% while the ARV 106 receives strength-increasing updates and the addition of new Smear Tech at the tips to provide better float. Another one to keep your eye out for will be the new Stranger – a progressive freeride/freestyle ski packing 100mm underfoot.

Big mountain news out of Chamonix is Black Crows’ overhaul of the Anima family. The men’s version has been updated (larger tips, lengthened tail, longer side lines, refined flex all designed to deliver improved performance in hard/mixed snow) and a women’s-specific Anima Birdie joins the fold. The new Anima Birdie will feature the same construction as the updated men’s version and will be available in 176 and 182cm. 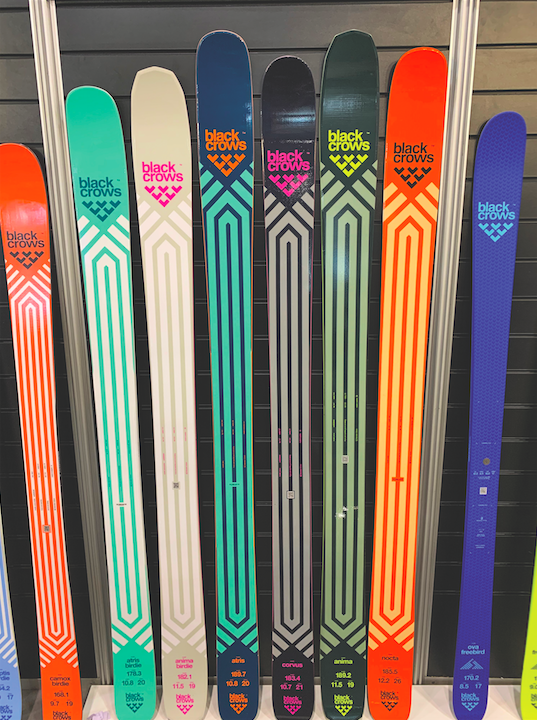 Fellow Frenchies Dynastar have totally overhauled their freeride line for next winter. The Legend series has gone and all their freeride/touring skis now come under one new umbrella – M-Line. We’ll deal with the backcountry-specific Tour and Vertical skis later but from a straight up freeride perspective the M-Free and M-Pro lines are the most relevant. The new M-Free skis (M-Free 118 and M-Free 108) are two playful progressive and powerful skis designed in conjunction with Richard Permin and the M-Pro range (M-Pro 105, M-Pro 99 and M-Pro 90) is made up of three fast and powerful directional skis designed to charge in the big mountains. There’s also a women’s M-Freeski White that comes in at 88mm underfoot. 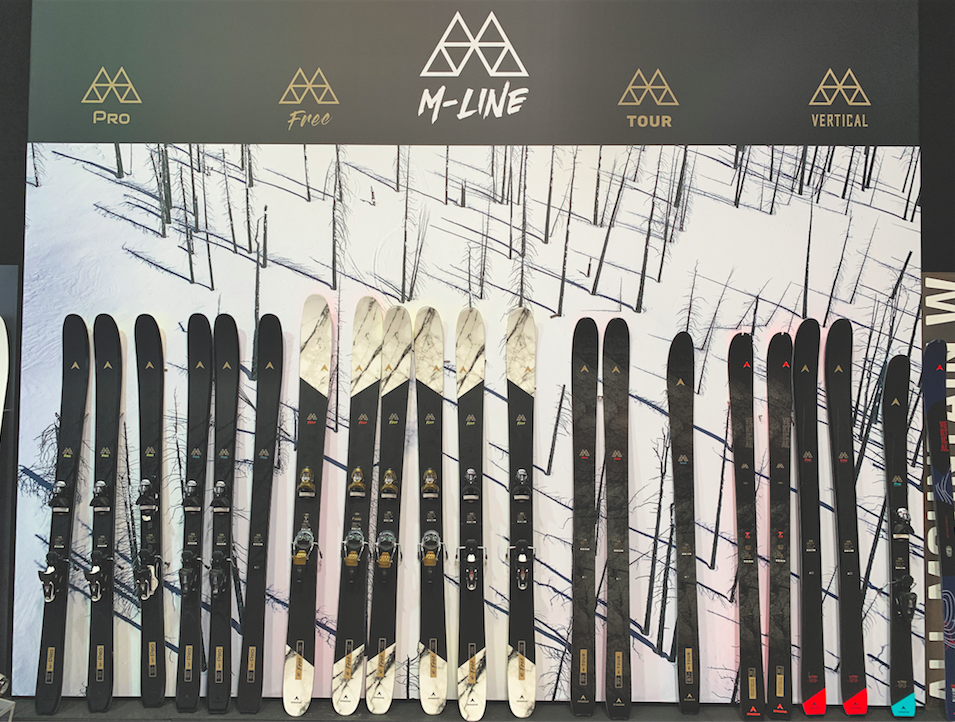 Elan’s now legendary quiver killing Ripstick series look set to charge faster and harder next winter thanks to some significant updates. The new carbon construction, beefier and stiffer tips, and slightly shorter lengths should eliminate any chatter that you may have experienced when travelling at high speeds. We can’t wait to take ‘em for a spin at this year’s SIGB Ski Test.

Tweaks and updates are also the order of the day over at Faction as the fast and furious Dictator series expands to include a big-mountain ski for women – the Dictator 3.0X. The Dictator 4.0 gets a re-design (new elliptical radius) for easier turn initiation when blasting down the mountain at supersonic speed. Elsewhere in the range, it’s au revoir to the Candide’s CT 4.0 and bonjour to a burlier, more durable construction in the CT 1.0, 1.0X, 2.0 and 2.0X.

When it comes to ski categorization, Fischer have turned the whole male vs female thing on its head by making their entire 20/21 range ‘genderless’. Instead of putting us blokes and birds into separate M & F boxes, they’ve decided to offer their skis in a choice of colours because apparently ‘passion knows no gender’. We reckon the pick of the bunch from a style perspective is the shocking pink Ranger 102 FR which should appeal to anyone who self identifies as a freerider. 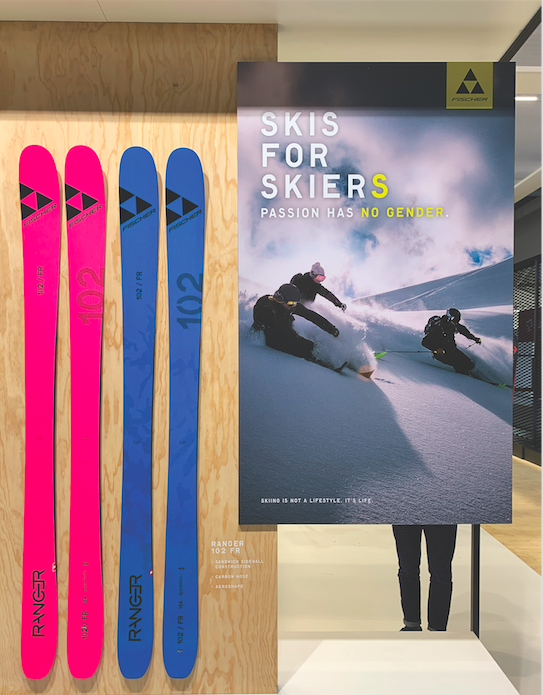 It’s a case of ‘if it ain’t broke, expand it’ over at Head where the enormously successful Kore collection grows even larger next winter with the addition of an 87mm version for both men and women.

Fresh off the rip roarin’ success of last year’s Mindbender series, K2 have added another awesome looking line of skis to their freeride offerings – the all-new Reckoner series. A collection of proper playful looking big-mountain slayers, the Reckoners – Reckoner 122, 112 and 102 – are considered by many to be the rebirth of the late Shreditor series and will replace the existing Catamaran and Marksman. 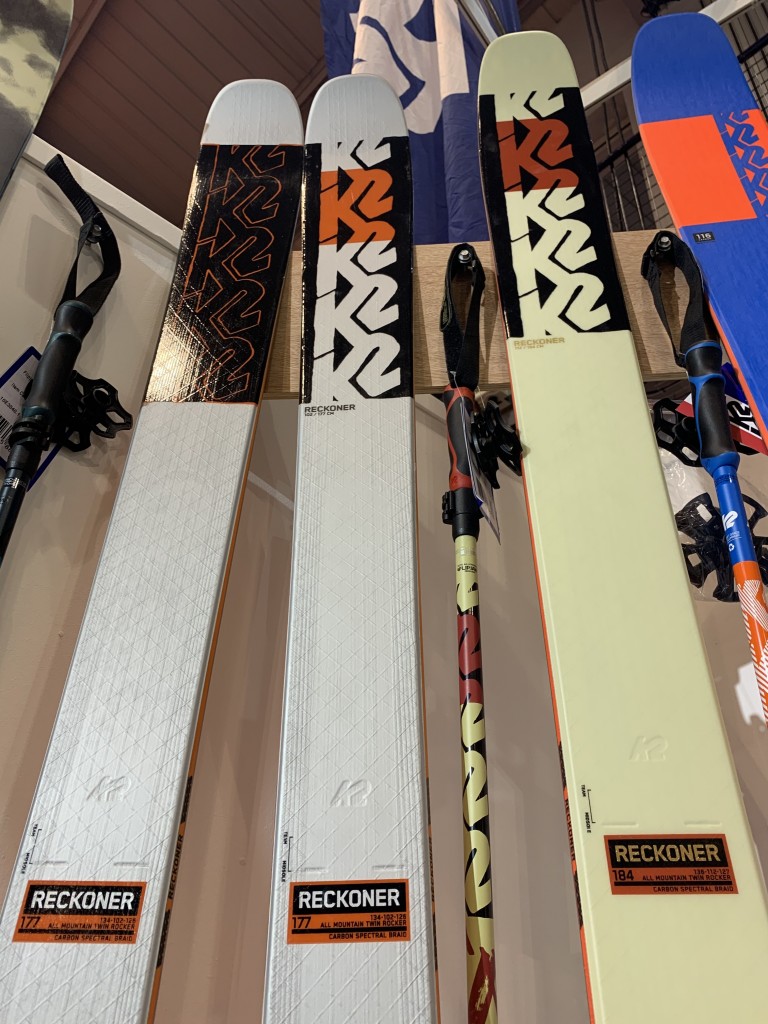 There’s a heap of new stories coming out of Kastle this winter including glow-in-the-dark skis and the introduction of the new ZX 108. Designed to broaden the brand’s appeal to a younger audience, the ZX 108 features stealth-like cammo looks and offers a more affordable option than other existing freeride specific models in the brand’s current FX line.

We’re massive fans of Nordica’s Enforcer and women’s-specific Santa Ana skis (hello 2020 Skis of the Year) so were excited to hear of updates and additions to both line-ups for next winter. Whilst the Enforcer 104 Free,110 Free and 88 return unchanged for 2021, the all-new Enforcer 94 and returning Enforcer 100 will feature the brand’s True Tip technology and carbon chassis, both of which were introduced this winter in the Enforcer 104 Free, the Enforcer 88, and Santa Ana 88. Another mega addition to the line is the new Santa Ana 104 Free which we feisty Fall-Line females are super excited to try out at the SIGB Ski Test in a few weeks. 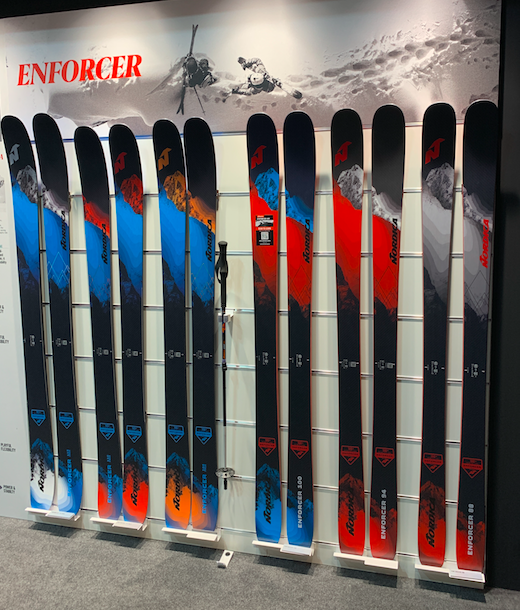 Big news over at Rossignol is the departure of the legendary ‘7’ series and the transition of Black Ops from an underground cult ski into an entire line and mainstream marketing story. The new Black Ops series features 5 men’s skis (the 118m Garner, the ISPO award-winning 106mm Sender Ti, the 98mm Holyshred, 106mm Sender and 94mm Escaper) and 5 women’s skis (102mm Rallybird Ti, 102mm Rallybird, 98mm Blazer, and 86mm Trailblazer). These Black Ops skis are part of Rossi’s larger ‘Ride Free’ collection that includes equipment and apparel designed so you can rock the same freeride style from head to toe. 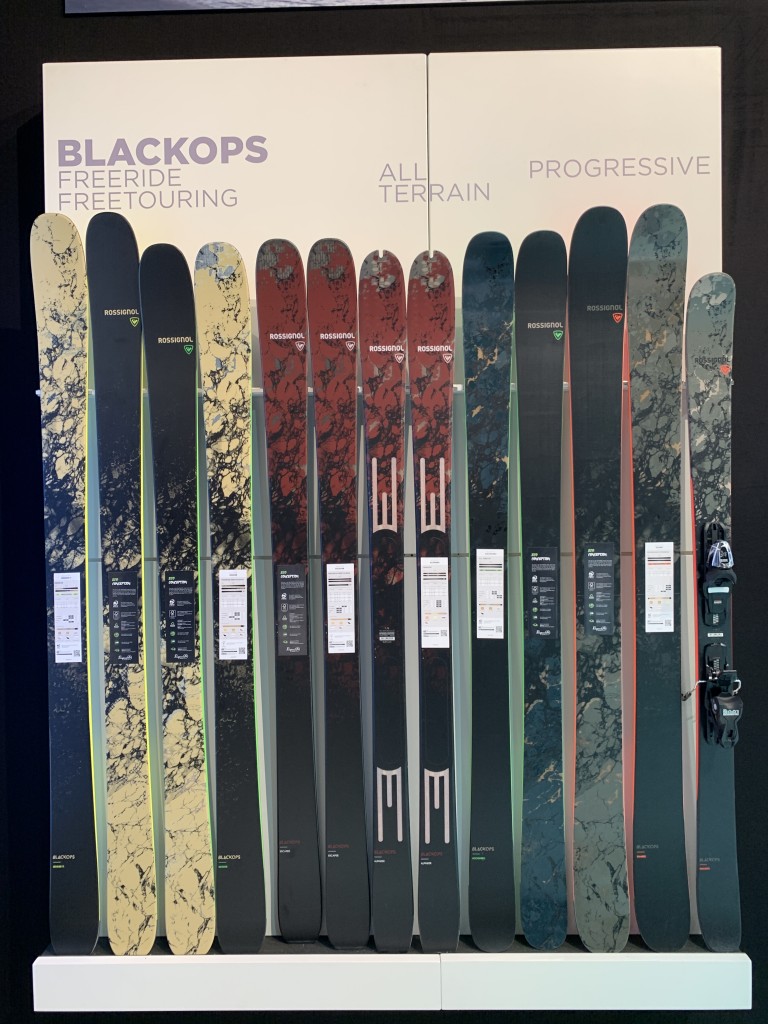 If you’re looking for a whole new freeride series to align yourself with this winter then Völkl ‘s new Blaze series (94mm and 106mm for men and women) is well worth a look. Replacing the 90Eight and 100Eight, the new light, playful and versatile Blaze skis will feature Völkl’s infamous 3D Radius sidecut technology designed to deliver fast long GS-style turns or short snappy turns as required. Other new freeride skis of note to look out for next winter will be the new Revolt 104 – part of the athlete collaboration ‘Built Together’ Revolt series – and the Katana 108. 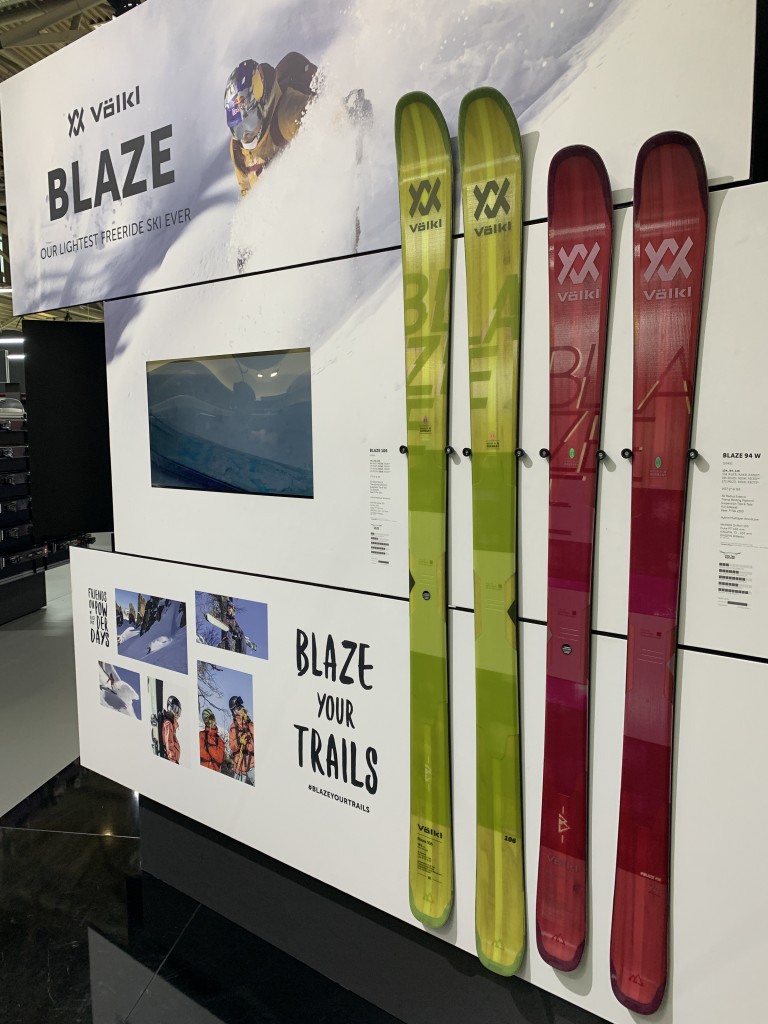 And when those deep days do finally arrive, we suggest jumping aboard one of the new and improved skis in ZAG’s freeride-specific SLAP line. With a new construction for winter 2021 (including paulownia/poplar core and semi cap sandwich construction), the SLAP series look set to be more floaty and playful than ever. 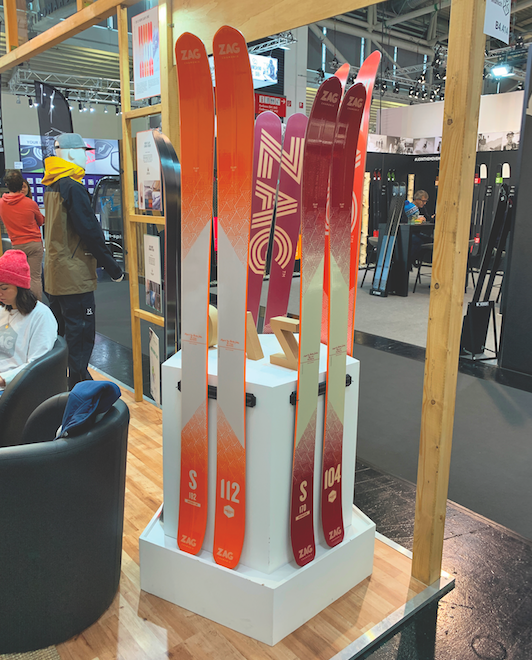 Beyond the ropes is where it’s at for us at Fall-Line so we’re really excited to see so much continued growth and activity in the touring ski sector.

It’s hard to argue with Armada’s women’s free-touring Trace skis when it comes to downhill performance and with a new ultra lightweight core for winter 2021, they’re positioned to go uphill at speed too. The 2021 98mm Trace will weigh in at 1,475g per ski (164cm).

Other wicked-looking winter 2021 weapons for women include the new women’s Backland 98 and Backland 107 from Atomic. The 107 looks set to be a powder-charging backcountry beauty, weighing in at just 1,450g per ski it definitely won’t hold you back when you’re hiking for fresh.

Another powerful touring ski to look out for next winter will be the updated Corvus Freebird from Black Crows. With a less pronounced rocker, more tail taper, elongated sidecut and titanal mounting plate underfoot, the 2021 version looks set to be more aggressive, precise, and stable than ever before. 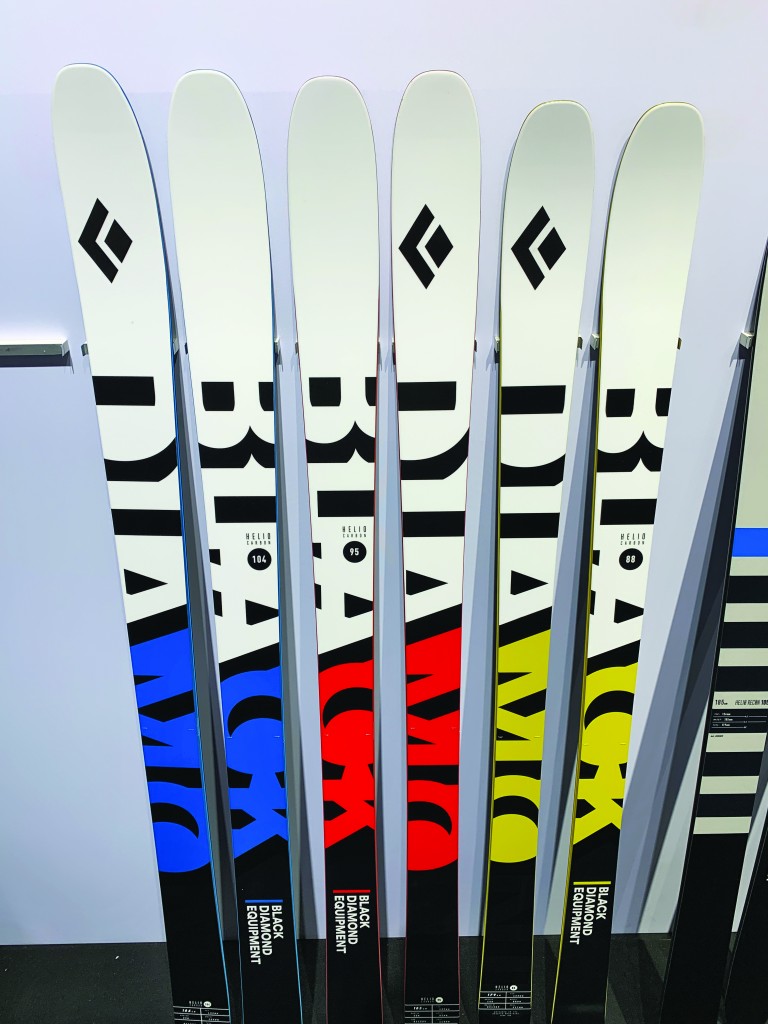 DPS Skis may be venturing onto the piste for the first time next winter with their Pagoda Piste line but they sure as hell ain’t abandoning their backcountry roots. The all-new metallic style Pagoda Tour series combine DPS’s proprietary new carbon laminate with a combination of ash and paulownia woods and a purpose-built, aerospace-grade foam. The result? ‘A special alchemy of power, energy and dampness.’ All aboard we say. 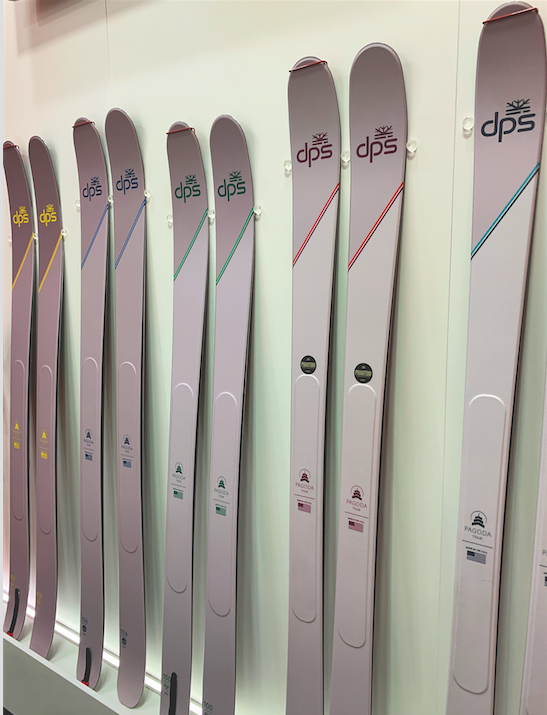 Fast and light backcountry specialists Dynafit have a host of new product planned to hit the skin track next winter. The stand out story is the new Blacklight Series of ultra-lightweight, minimalist skis designed to facilitate speedy ascents in the high mountains. The flagship model – the ISPO award-winning Blacklight Pro – is an 80mm underfoot, 910g lean machine that will appeal to technical ski mountaineers and features Dynafit’s unique three-quarter skin and new Pin-Skin attachment system. Other stories of note include pre-packaged Seven Summit Ski Sets for both adults and kids (Sets include skis, bindings and pre-cut skins) and weight saving across the board. The popular Tour 88 and Tour 88 W shed 50g for next winter and our personal faves – the Beast 98 and last year’s Women’s All-Round Touring Ski of the Year – the Beast 98W look set to lose a pretty significant 70g. 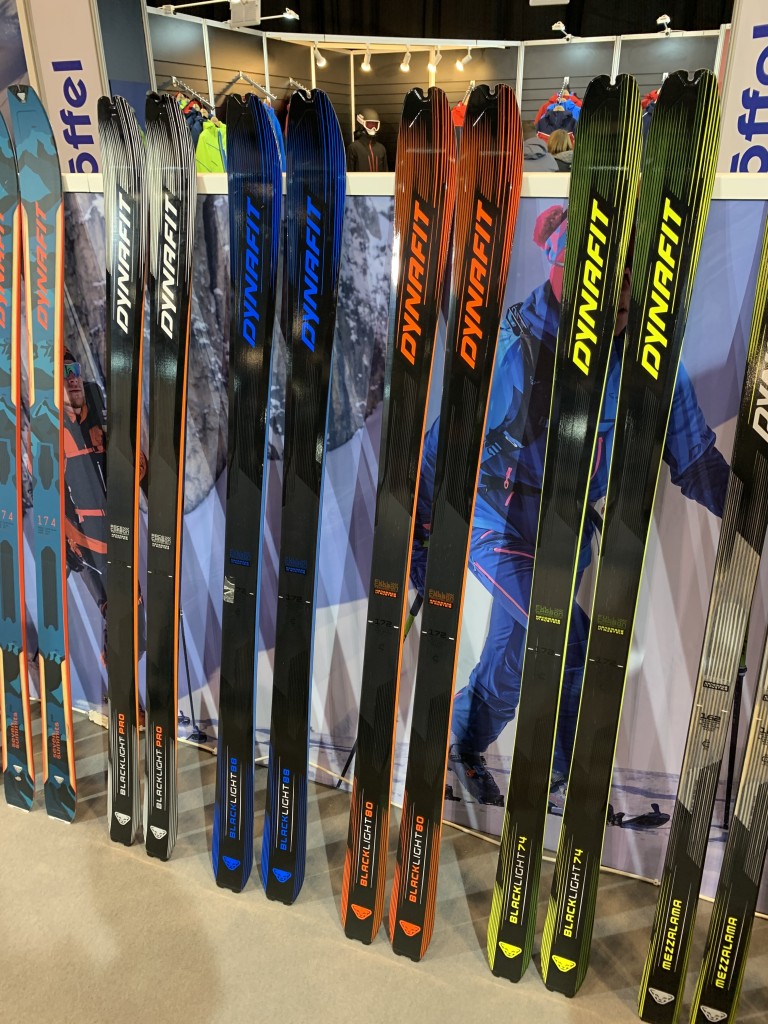 The aforementioned M-Line from Dynastar includes 3 new touring skis – the M-Vertical (88mm underfoot) the race optimised 65mm underfoot M-Pierra Menta (1320g per pair) and the pick of the bunch as far as we’re concerned – the M-Tour 99 – a cracking looking replacement for the much-loved Mythic replacement weighing in at 2600g per pair.

Across the border in Switzerland, Faction’s Agent family is set to get bigger next winter with the addition of the Agent 3.0 (106mm underfoot), women’s Agent 3.0X (106mm underfoot) and Agent 4.0 (116mm underfoot). We seriously dug our turns on the narrower 2.0 at last year’s Ski Test and are really looking forward to getting to grips with these new fatter backcountry beasts next winter. 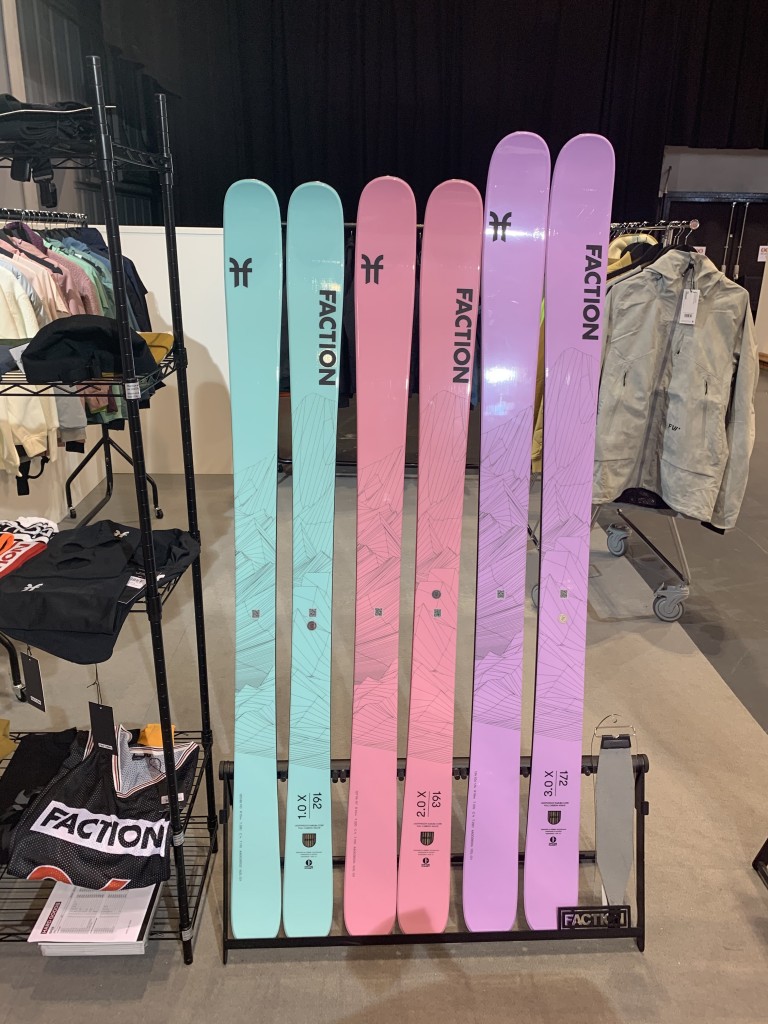 Fellow Swissies Scott are hitting the backcountry hard next winter with a new Superguide series made up of four new skis – Superguide 88 and 88W, Superguide 95 and 95W and Superguide Free Tour (104mm underfoot). With paulownia/beech cores and carbon/aramid laminates these new Superguides promise to be equal parts light, lively, damp, and stable. They’ll also be rocking Scott’s three-radius sidecut for mega downhill performance in all conditions. Publisher Dickie got to grips with the new Superguide series in mixed snow in Courmayeur earlier this winter and reckons they’re super sweet on the uphill and more than capable of holding it all together even in mega challenging conditions. Confidence-inspiring. We like it. 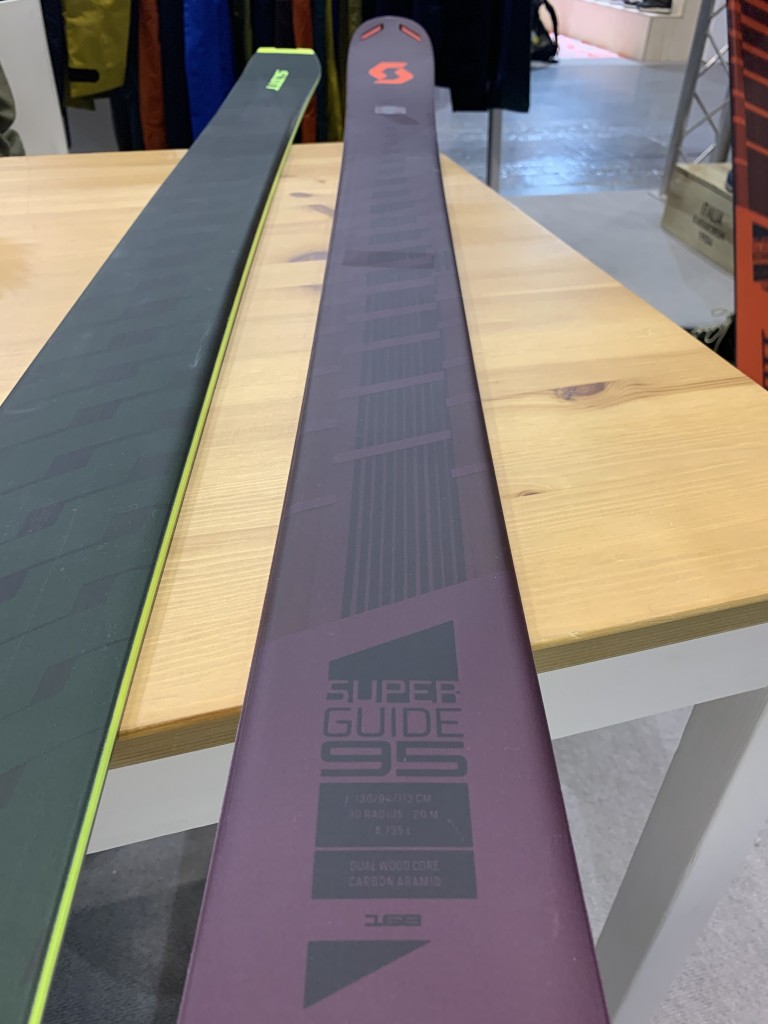 And finally, there a completely new set of touring skis to get on board with next winter – Völkl’s Rise series. The new range features six lightweight Rise skis – Rise Up 82 and 82 W, Rise Above 88 and 88W, Rise High 88 and Rise Beyond 98 (replacements for the VTA 88 and VTA 98). The Rise Up and Rise Above models feature Völkl’s 3D radius sidecut and all 6 skis come with the brand’s new skin attachment system – the Smart Skin Clip.

BE THE FIRST TO GET OUR IN-DEPTH ON-THE-SNOW REVIEWS OF ALL THE NEW GEAR FOR NEXT WINTER AND SUBSCRIBE NOW.

AND CHECK BACK IN FOR OUR PREVIEW OF THE BEST NEW BOOTS, CLOTHING, PACKS, HELMETS AND OTHER ACCESSORIES – COMING SOON!

STAY FOCUSED ON THE FUTURE: