The Fall-Line team reflect on the winter that was…

Niseko. A powder session under the lights. No one around, peachy soft, deep snow, and a gondola to lap (and keep warm in). Nowhere has better night skiing. Or beer to celebrate with once things stop running at 8.30pm. Oh yes, you can ski 12 hours straight if you’re mad enough.

Haglofs Vassi jacket, in Hurricane Blue. Pricey, at over £400, but the best 3L jacket I’ve had/tested by a mile. Everything is beautifully realised – as you expect at this cost – but it’s still marvellous and makes you think “Yes!” every time you put it on. Freeride perfection.

Niseko, Japan. I like powder, it has lots. It’s also brilliant for solo travellers like me – friendly, easy and cheap. 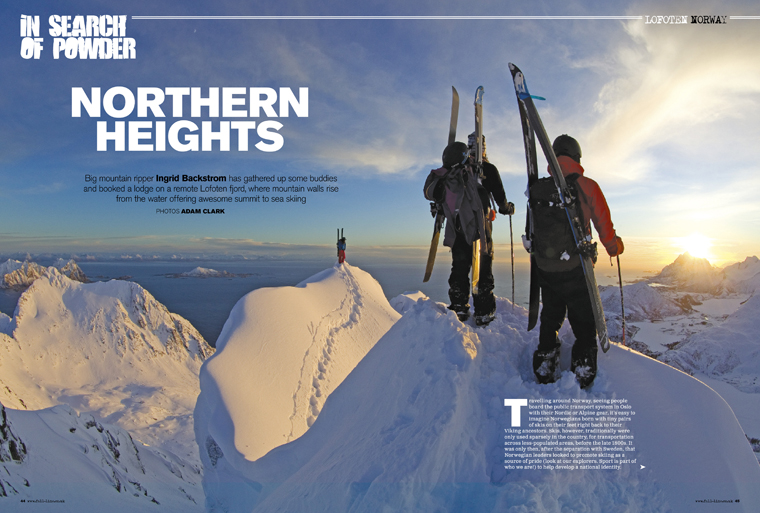 Backcountry issue. Loved the cover, sells, content, everything. What Fall-Line’s about really…

This season had so many stand-out days that we must have been blessed with great conditions. Or was it that the days spent in the white room made the sweet ones so much sweeter? I can get it down to two, but no further:

The day we found the “Gully of the Gods” (as we came to know it) on Gullmundstinden, Norway. Whilst sailing from Tromso to Alta we moored alongside in Bergsfjord to hide from a storm. The next day it suddenly cleared – so we skinned off in hope of finding something (anything) worth skiing. Bugger me – just as the sky turned blue, we found the most awesome wide gully system from nearly sea level to the summit ridge – with virgin powder sitting at 20-35 degrees all the way. Some consolation prize! 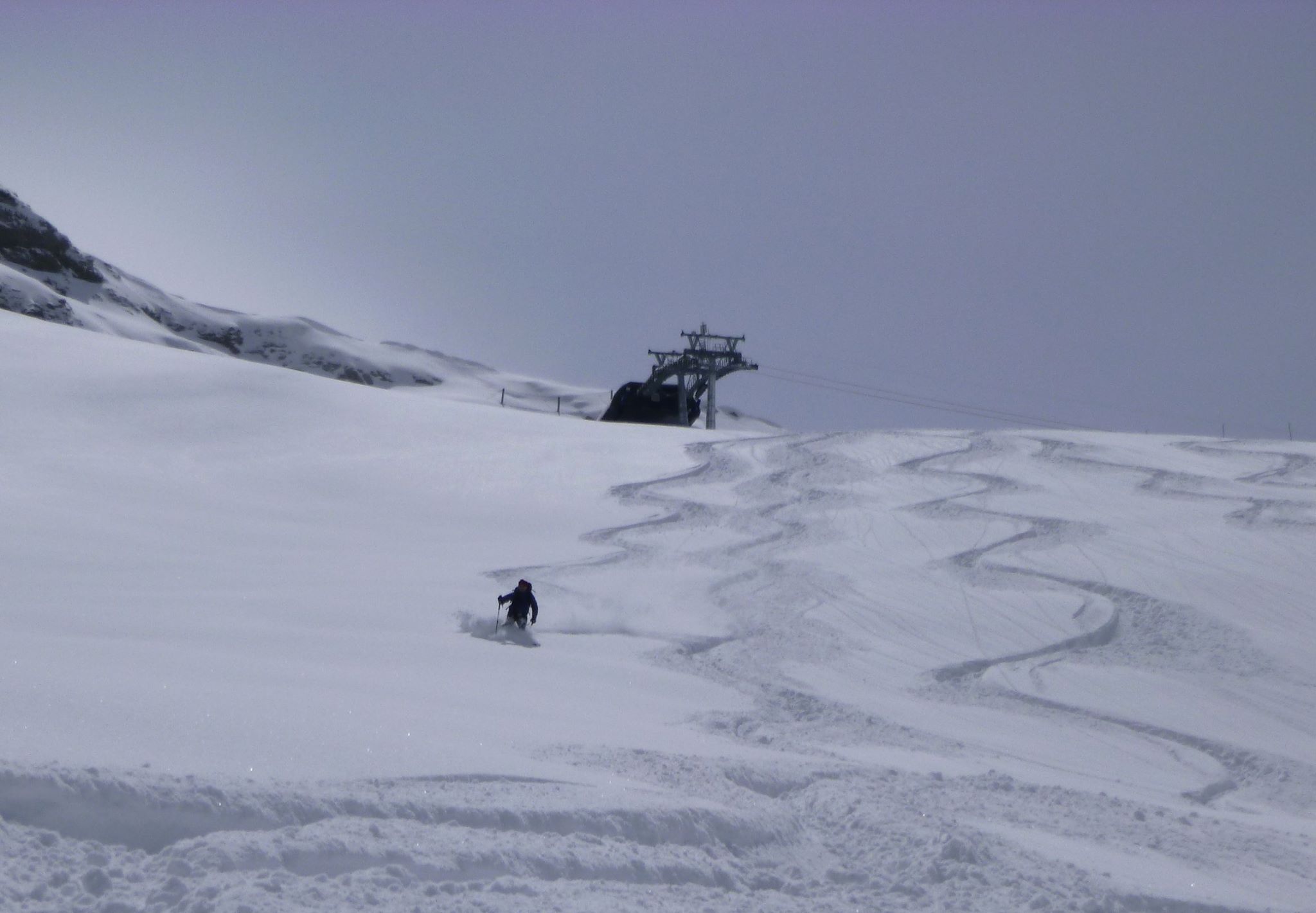 80cm of fresh snow in Grindelwald, and no one to share it with | Martin Chester

In the last week of April we decided to stay put in Kleine Scheidegg, Switzerland, rather than head up the Jungfraujoch train just to get hut-bound. Man alive – 80cm of snow later, we had the closed resort of Grindelwald to ourselves. We had to skin for every turn, but all that snow on a base of old pistes, all to ourselves? The best snow of the season, and worth every watt of effort. And all with a train to get you back home at the end of the day.

My Scott SuperGuide 95 skis, of course!

…I would save that Austrian Guide from the near-death experience we witnessed, when he triggered the cornice on Storgalten. Tips hanging over the void. And he would change his underpants!!

This winter I discovered a gem that had been on my bucket list for a long time: Val Maira, Italy. Was it the pristine valley with no lifts, trees to 2500m and a lifetime’s worth of great touring on every aspect? Was it “Grappa Time” with Alessandro Bolfi and all his enthusiastic info at the Hotel Londra? Was it the Piedmont powder and the equally good tour of the local wine list? Nope – it was the superb vibe in a valley full of ski tourers, and the great local beta provided by Bruno Rossano in his book and map to the valley. What a labour of love, and what a venue. I’ll be back next year

…was the Backcountry Issue. This one was jam-packed with really good people getting passionate about really good adventures. I enjoyed and was inspired by every single article.

Three things I learnt this winter…

Will Robson, writer at large

Hooning about Verbier with the irrepressible Ed Leigh. There was enough powder up high for me to follow him where I probably shouldn’t have gone, resulting in our glancing off each other at high speed. Beers and laughs all round later in Pub Montfort – a good day.

The Canon G7X camera in a Lowepro ‘Dashpoint 10’ case is a great little combo – high quality pocket camera with a secure case on your backpack’s shoulder strap.

It would be more skiing and deeper snow – good conditions were rare on my schedule last season.

Callaghan Valley out of Journeyman Lodge, near Whistler, BC. Eight-mile skidoo ride into some fine Canadian backcountry.

The Powder issue. Always a goodie and this season’s didn’t disappoint (and not just because I’m in it).

I had the best powder day(s) of the season (and possibly my life) in Fieberbrunn, Austria.  I happened to be in this little Tirolean Schneeloch (snowhole) just as the first big powder storm of the season hit in January, and it more than made up for the slow, depressing start to winter. One metre fell in 48 hours, transforming the grassy meadows into one giant powder-covered playground. I spent the next three days whooping and hollering around the extensive sidecountry as we tried to keep up with our guide, who was even more enthused than any of us…

My new Scott Cascade 95 touring skis. So. Much. Fun. I ended up using them as an all-mountain ski for the second half of the season. And even took them through the park once or twice (complete with Dynafit bindings).

I’d be more brave. I spent most of the season worrying about falling, which held me back. It took until March for me to stop worrying and just go for it. It makes progress very slow.

Serfaus-Fiss-Ladis. It’s the best “big” resort I ever skied; well-connected, very varied and fast lifts. How more Brits don’t ski here remains a mystery to me.

The Season Planner Issue. Graham Bell in New Zealand. Cody Townsend in Svalbard. Sam Smoothy in Alaska. Plus the best of next year’s resorts and gear.

Last day of the Ski Test at Kühtai; a little bit of fresh snow, playing around on easy lines within spitting distance of the pistes, realising that I could still ski on my new hip and starting to push harder, knowing that when the next one goes in it’s only going to get better. Standout skis that day? The Rossignol Soul 7HD, and my personal favourite, the Nordica Enforcer 93. 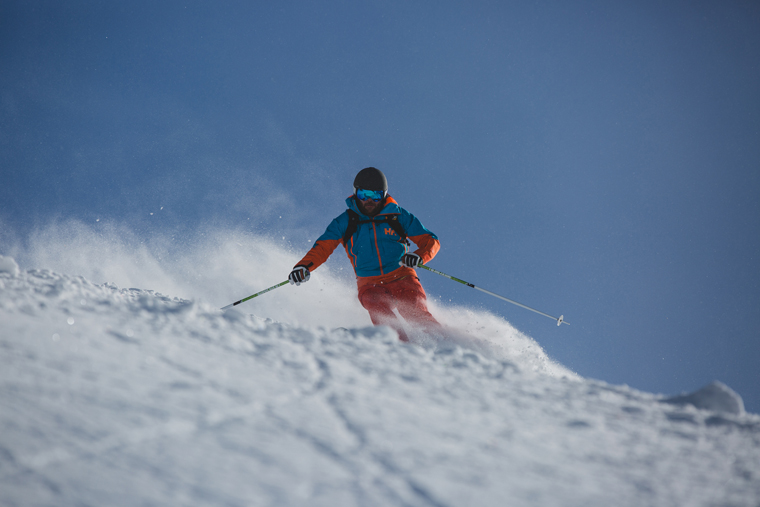 …was the Julbo Zebralight Aerospace Goggles (RRP £175). The most excellent reactive lens I’ve used. Truly outstanding definition in lower light, and easily soaks up the sunny day rays without glare. They do it in the Aerospace format which pops the lens clear of the frame to allow air to circulate. I poo-pooed this as a fad, and then ended up using it at the end of almost every run at the end of the season as the heat built up.

Snow. Having more of it at the places I went, even though I missed the drought of first couple of months of the season. Always more snow, please.

Norway. I was bowled over by the landscape – it’s like a supercharged Scotland – and hugely taken with the ‘well, we just pull over here and skin up here and have lunch on top of that mountain over there’ attitude. Not hard because you’re starting from a low altitude – thankfully – and not tricky unless you want to make it so. But overall it’s stunning, different, skiable scenery and wonderful vibe. I am now the Trollhunter!

1000m skinning earned outstanding turns above the fjords. Out with Headnorth.no on a quirky, eye-opening and different ski touring trip. Truly excellent skiing

Every issue has resorts/areas I haven’t skied, which is probably the most interesting thing about the magazine for me. So the favourite issue is Ski Europe. It’s so close and accessible, and it made we want to go to YET MORE places that are less than a two hour flight away.

We do bang on about backcountry, and I’ve certainly seen a few comments along the lines of “do the guys at Fall-Line every go downhill anymore?”. I think I can speak for every member of the team in saying that the up is just to get the very best down around, and some of the best runs come with just a little extra effort, which rarely represents what anyone would call touring.

My favourite off-piste instant-access run is at Bormio, where it mixes up a bowl, trees and the possibility of a few little plops (the less-than-extreme-skiers’ version of ‘drops’). You need to put in a good old pole at the bottom to get out, but there’s no doubt it’s worth the effort, even for a degenerating sack of crumbling physicality such as myself. Same goes for our favourite runs at most resorts – a little trudge at the top or bottom equals almost unlimited additional quality of runnage. See you on the quiet side.