A weekend in Whistler for Extremely Canadian’s two-day Steeps Clinic proves to be worth its weight in maple syrup for Will Robson. 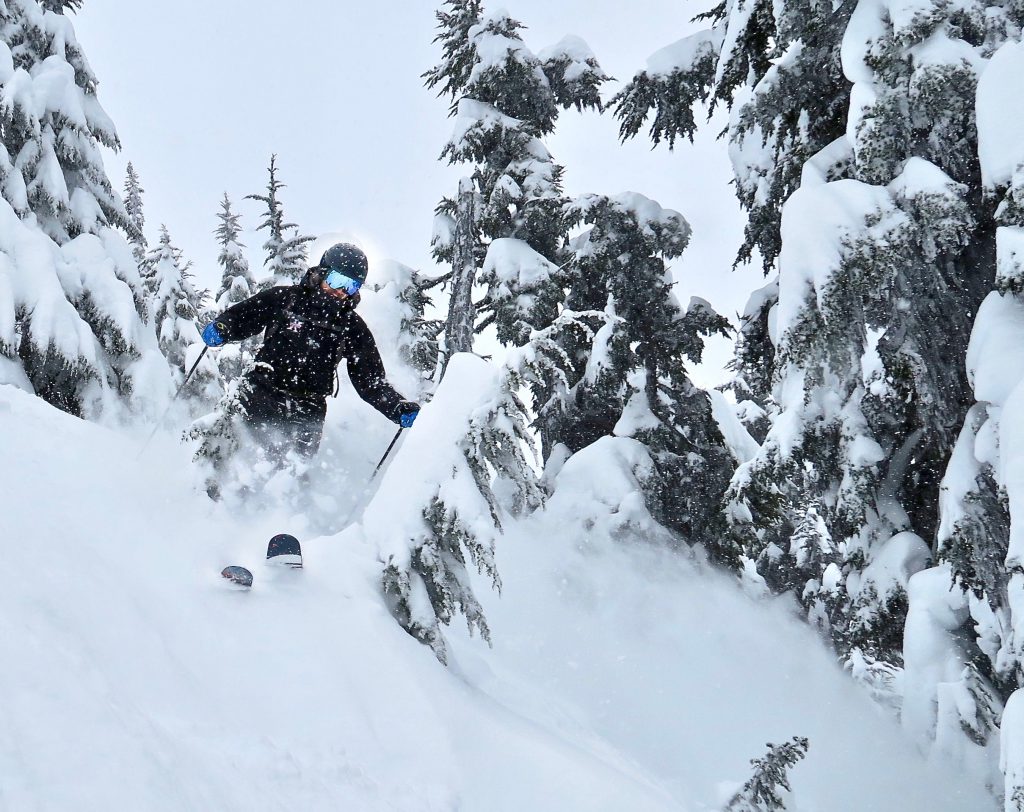 18:35 The Pacific Coach Lines bus pulls into Whistler, 75 miles north of Vancouver, after a couple of hours’ winding along the Sea to Sky Highway. Bags retrieved from its underbelly, I load them onto the shuttle bus. Nearly there.

18:46 I’ve been dropped off at Aspens, one of many large blocks of condos tucked in the woods in Upper Blackcomb Village. Whistler (600m) opened in 1965, although they didn’t pave the roads until the late ’60s. The idea was to have the town flow alongside Fitzsimmons Creek towards distant Howe Sound, with ‘eddies’ of accommodation to the side. Nice idea, but be aware that 50 years’ worth of development means walking anywhere can take a while.

19:01 Outside my one-bedroom condo, a wall of conifers sags under the weight of heavily falling snow. 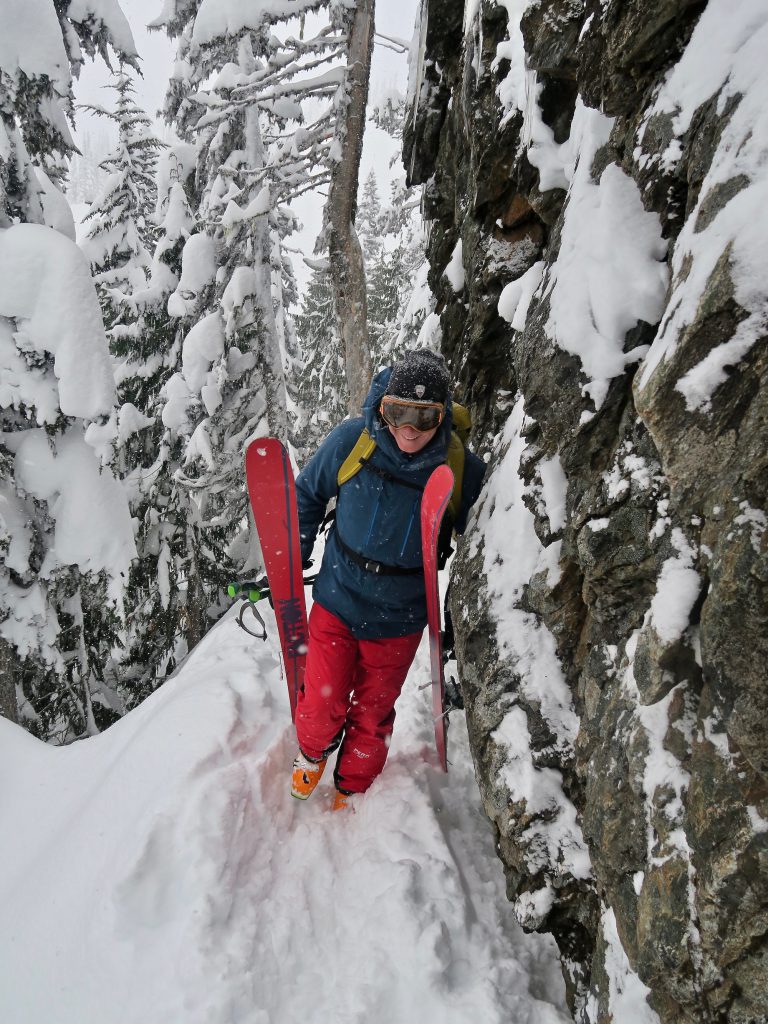 08:13 I exit out the back of Aspens and ski down Lower Merlin’s piste to traverse my way across to Whistler central.

08:28 I discover this is not possible. I’m stomping across Blackcomb Way into Whistler Village, trying to be grateful of the warm-up. I’m about to join Extremely Canadian’s two-day Steeps Clinic.

08:31 I meet up with the EC crew outside the Carleton Lodge opposite the Whistler Village gondola. Extremely Canadian has been teaching competent skiers how to ride challenging terrain for more than 20 years, mainly here in Whistler, but they also take groups to places like La Grave. Talking to others it’s clear many are regular customers. It’s not just the instruction: the guides take you to terrain you wouldn’t even know about unless you’d lived and skied here for years. Whistler-Blackcomb is Canada’s biggest ski resort with over 3,000 hectares of ski area; if your time is short, accessing the guides’ knowledge is worth its weight in maple syrup.

08:47 After a briefing we’re heading for the Whistler Village Gondola. The snow is plentiful and the sun is out. There is a guy wearing a rainbow-patterned traffic cone on his head. He may be celebrating that this week is Whistler’s 26th year of Pride Week. Or maybe it’s his hat. 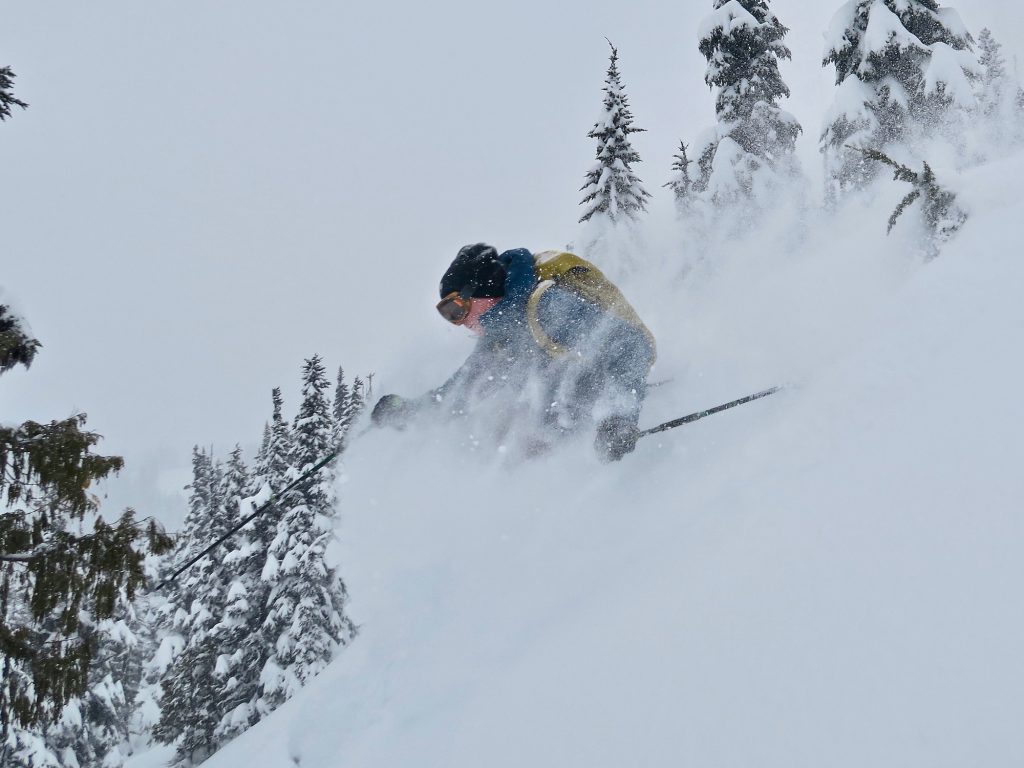 09:22 We’re warming up on Whistler mountain, I couldn’t say where exactly as no one is hanging about long enough for me to look at the trail map. We hit the piste first, soft with bashed snow; then the sidecountry. It’s deep and light and the guides are ecstatic. These conditions are as good as they’ve been in a long while.

10:45 We shake out into groups of five or so. Our guide, John Moon, is a man of few words, not least because he has a heavy cold. We must do what he says as he doesn’t like paperwork. We’re going to get along.

11:48 After some squirrely runs through trees, John is taking us high on the Harmony 6 Express to access some chutes coming off Little Whistler Peak (2115m).

11:53 The entrance is icy and rock-strewn. John, fearing paperwork, is almost animated about us side-slipping safely onto the face of Excitation, a 45˚ pitch that leads down to Glacier Bowl. Some people are cautious but it doesn’t seem so bad to me. I suspect they’ve never been ski touring and don’t have to master the near-vertical sheet-ice side-slip. “I see you’ve skied in Europe,” says John. The snow below the entrance is cold and light and we rip down onto Glacier Bowl.

12:19 Just when we think we know where we’re going, John cuts off through more trees and we find yet another pristine powder run, although this little pitch requires some attention. “You need to make a hard right turn on the frozen waterfall,” warns John. It’s time to be British and feign nonchalance.

12:34 John is a lithe and fearless skier and expects no less from his group. Extremely Canadian tailors its instruction to abilities within the group, but John has decided that this group should hunt clean, deep snow before anyone else gets to it. It’s definitely the right call, not least because we all have to raise our game just to ski where he takes us: being pushed is often half the battle for good skiers wanting to get better. 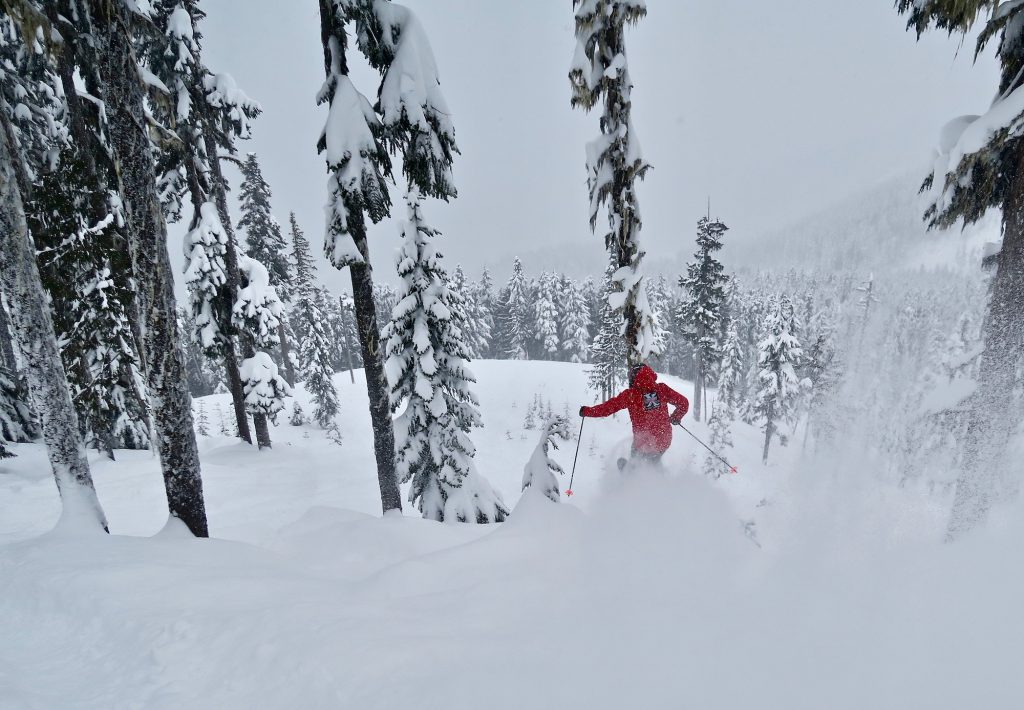 12:35 José, visiting from Mexico, impresses Christen, a local and Steeps Clinic regular: “You ski well for a Mexican,” she points out. I’m certain she means well, but José’s expression is hard to read beneath his mirrored goggles. Time for lunch.

12:48 We’re at the Raven’s Nest (1300m) at the mid-station. It’s the only vegetarian restaurant on Whistler mountain and I opt for lasagne. John, a fishing guide in the summer, grows his own vegetables and clearly enjoys his healthy lifestyle. It must be hard to avoid here as the action is year-round. In fact, more people come to Whistler in summer (1.5 million) than winter (1.3 million), mainly thanks to its biking trails.

14:20 Having shot up the Big Red Express we are taking another John detour, starting down the black diamond run Raven, then cutting down through the trees on the Club 21 line, before crossing the Ptarmigan blue run into the Side Order tree run. The lines are not too steep and as the trees have been gladed we take them with more speed. Fun times.

17:28 I’m sitting in the GLC, a bar adjoining the Whistler Village Gondola, having spent the afternoon exploring more of Whistler’s boundless and steep terrain with John and the group. My tired legs the sign of a good day. Tomorrow it’s over to Blackcomb, generally thought to have steeper terrain than Whistler. I’m trying one of Whistler’s famous Caesar cocktails. Think Bloody Mary with clam juice and a dried meat stick. Only by trying it will those flavours come together for you, as they almost do for me. 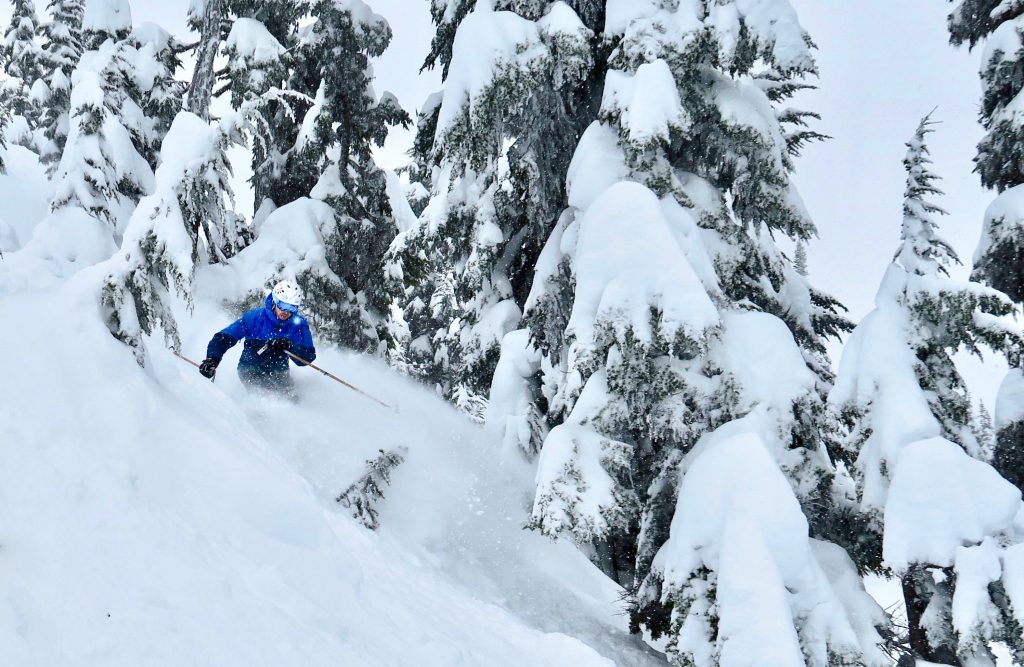 09:20 We’re over on Blackcomb ‘uploading’ on the Excalibur gondola and then the Excelerator Express chair. There’s been a dusting of snow overnight: just enough for us to revel in that first tracks feeling.

09:42 In ‘Steeps Clinic’ style we traverse a bunch of regular pistes cut through the woods, such as Stoker Bumps and Sorcerer, without actually going down them. John keeps finding more fresh tracks, steep pitches and mini-snowfields. It’s fun, if a little disorientating.

10:03 We exit the Solar Coaster Express chair to find 7th Heaven has just opened, so we speed down the easy 7th Avenue around to 7th Avenue Express and upload to Horstman Hut (2284m).

10:23 After traversing False Face, we’re skiing Sylvain into Sudain’s Couloir, making a little cut over to what’s called the Feather Trees. It’s all double-black-diamond steep, but the snow makes it epically fun to ride down.

10:58 Getting off the Glacier Express we head to Spanky’s Ladder (2137m), a famous boot-pack up to a ridge that accesses the far side of the ski area, down towards Blackcomb Glacier. Avalanche control has only just opened Spanky’s but already there’s a 50m queue of eager freeriders. 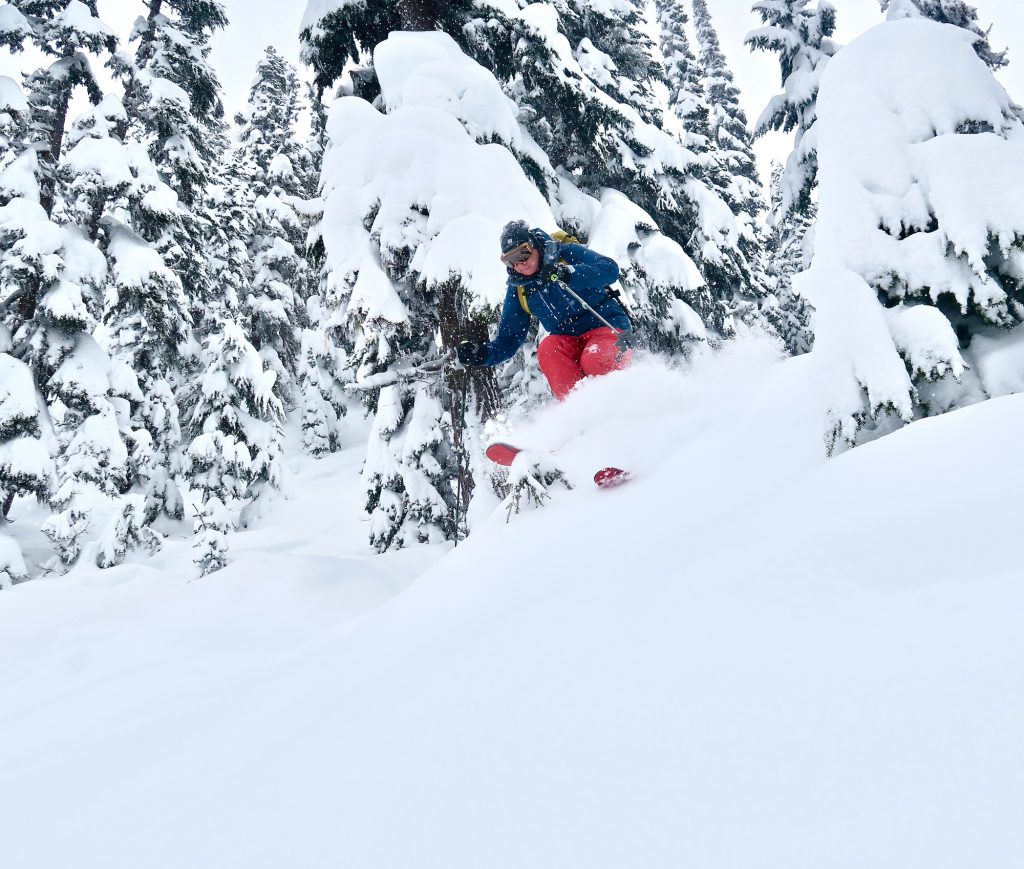 11:03 John says he lives at two speeds: ‘molasses or full-on’. This is his ‘full-on’ moment: the queue at Spanky’s sees him hike up away from the path, post-holing up to his thighs and inviting me to follow at a pace I find challenging.

11:38 The other side of Spanky’s Ladder reveals wide but steep bowl options. We choose a series of deep-dished snowfields, first Garnet, which then funnels us into Diamond Bowl. Midway down we cut left to a place called Bad Attitude. The good snow takes the edge off its intimidating name and we ski its 40˚ face and cross over to a pitch called Calvin and Hobbes, before exiting out on the rescue road to Crystal Express.

14:05 After lunch at Crystal hut we’re exploring more deep trees and steep pitches on Blackcomb Mountain. Although the light is flat, the endless tree-skiing options mean we don’t stop. John disappears at one stage, cutting off the side of a track into steep, dense woods. We find him leaning nonchalantly on his poles, smiling at our temporary panic that our sensei had disappeared in the mist.

16:02 Extremely Canadian guides are getting the beers in at Merlin’s Bar and Grill, and local band ‘Hair Farmer’ have struck up a Creedence Clearwater Revival rock standard.

There’s no doubt this Steeps Clinic is great value for money. We all got some technique tips on the way, but the main benefit is the exceptional range and fun and fast pace of the riding. I can see why many sign up to the clinic every season.

If you’ve just arrived and are a good skier wanting to check out Whistler Blackcomb’s terrain and conditions, there’s no better or faster way to dial yourself in.

Having never skied here before I couldn’t have had a better introduction to this legendary terrain.

Over on Blackcomb, boot-pack up Spanky’s Ladder for a fun run over the back of the mountain with some challenging steeps.

In the upper village (Blackcomb), Fitzsimmons Pub is a magnet for local and visiting beer-nerds

In Whistler village Brickworks is great for live music and events

If you prefer peace and quiet after après ski, book into the Scandinave Spa for hydrotherapy and massage – silence is mandatory

Air Canada has daily flights from Heathrow to Vancouver from CAN$1,050 return (£620).

Blackcomb Peaks Accommodations offers a one-bedroom condo from CAN$330 (£196) per night.

Mike Douglas shows us around his home resort of Whistler, BC

Battle of the ski resorts: Whistler