I have a love-hate relationship with lifts. Yes, they are essential for the average day’s skiing, but they’re often too long, too slow, in the wrong place or too busy. I hike and skin as much as possible, but often you need a lift to get to the point you want to hike and skin from. Exercise for exercise’s sake is all well and good, but on a powder day lifts rule.

Once I was skiing with a friend who was an instructor in Val Thorens. He was annoyingly talented and would pop a 360 off any bump higher than an inch.

We’d just finished dropping a couple of secret spots he knew; powder to our waists, needing fast, direct lines. Grins glued to our faces we popped out at a monster lift line. “Ah Simon, ees OK, I am with the ski school so we have priority.”

“No matter” – and off he toddled, stomping over the skis of the few million people in front. Now, it was OK for him as he was in uniform, but for me?

The few million people rightly decided they didn’t like two blokes walking all over their skis and decided to beat the hell out of the bloke not in a uniform. But his plan did work and we got to the front quickly. “See, easy Simon.” I wasn’t so sure as I dabbed at my bruised face. I may have faced a fortune in dental bills, but at least we could hit the line again!

Lifts have improved, but smaller resorts still have their share of arthritic one- and two-man chairs, and that’s often the sweet spot when it comes to fresh lines.

Les Contamines has a hamster-power lift that gives you a slow-motion view of everyone dropping the best lines while you grind to the top. By the time you hit the now-rutted lines, the guys who laid down those sweet turns have a similar view of you trashing them. Of course they’re smug in the knowledge that when they got on the lift previously (probably yesterday) they still had those lines to ski. 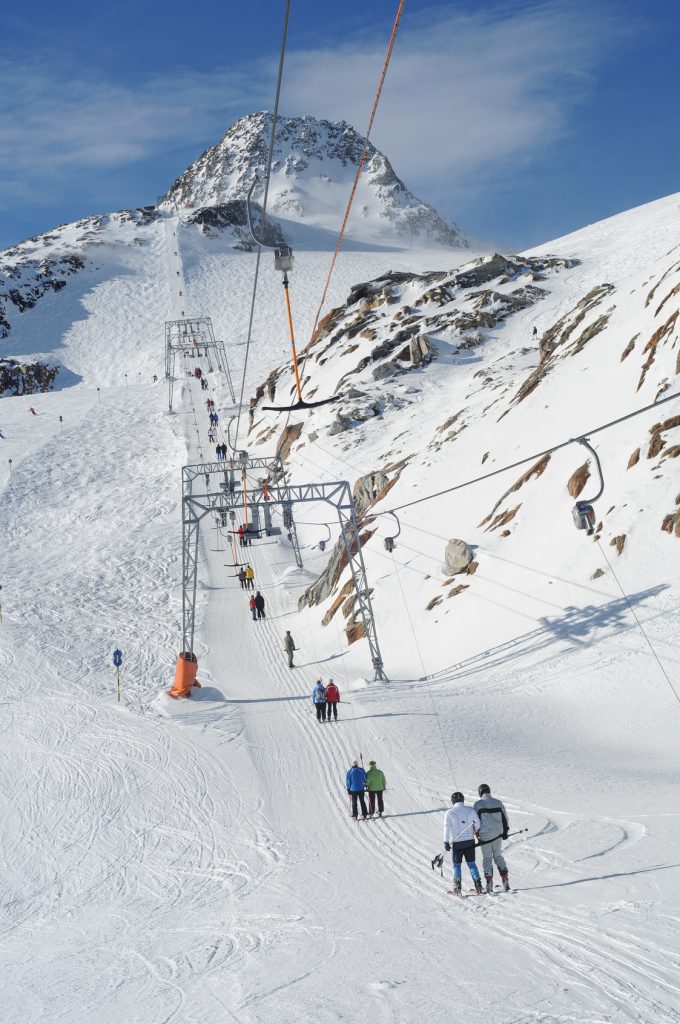 A T-bar in Tyrol, Austria | Fotolia.com

Powder and slow lifts go together. Resorts put in swanky high-speed lifts where the average public wants to ski, giving access to over-groomed wide pistes and enabling punters to get vast miles underfoot rather than quality of turns. Apps on phones tell them they managed a million miles; a few yards off piste, vast sections of the mountain turn into a strange inverted moonscape of moguls.

But maybe tucked away somewhere is a slow lift. A button with an alarmingly steep start, or a jerk that whips lesser mortals in the air, landing in a tangle of skis, legs and poles. Even better there might be a T-bar. Fewer and fewer people know how to ride them in comfort, so one journey on that fiendish contraption will make sure they never do it again. These lifts are underused, so for those in the know there will be lines no one has skied.

Some resorts are almost entirely made up of slow lifts, and will never attract the masses. Bruson near Verbier has slow lifts but accessible tree skiing, so in bad weather it becomes a locals’ playground. Still not the volume of folks that will be tracking out Verbier, and plenty for all if you know where to go.

Lifts can also be a physical test. Many years ago I worked in Livigno for a now-defunct travel company. One very cold lift – a two-man chair opened by the last Roman emperor – ran from Mottolino to the top of the Monta della Neve. It had slatted wooden seats and as you climbed on they’d give you a blanket for the 25-minute journey. You had an important decision: should you use it as a seat or to wrap up? If there were two of you, one would lay their blanket on the seat and the other wrap the two occupants.

When the weather was cold it set the teeth a-chattering and left you with frost nips to the cheeks. But the pistes were empty and vast untracked snow fields lay below if you didn’t mind a walk out. The resort has filled out now and an area like that is better lift-served. The chair was replaced by a high-speed six in 2000. These lifts still exist though, especially in Italy. Just last year I had the pleasure of riding a similar one in Sestrière.

So when I visit a resort for the first time, I check it out online and look for the ancient lifts, as they are often the best choice for untracked snow.

Often I use a guide – but I take along a hockey mask in case he takes ski school priority to the limit!

Simon Ashton is the chair of the British Freestyle Ski Team.