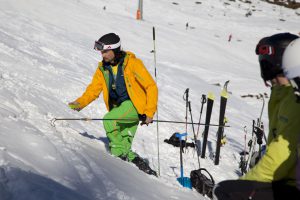 Need a hand to steer you away from the groomers? Here are five of the best new and improved backcountry courses, from basics upwards

When? Throughout February and March

How much? £595, including accommodation

Details: A five-day course covering touring basics, from off-piste ski technique through to skinning and transceiver work. There’s also emphasis on navigation and route choice, as well as winter anchors and belaying, as the aim of the course is to prep skiers for touring in both the Scottish mountains and the Alps. Participants need to be able to ski red runs in control, and have a good level of fitness.

Details: A 1.5 day course covering both theoretical and practical aspects of avalanche and snow safety. The first afternoon is spent looking at types of avalanche, weather, terrain and equipment. The second day is spent out on the mountain where participants learn fundamentals such as risk management, terrain checks and what to do when someone gets buried. The course is free, but does not include accommodation or a lift pass (€21 if bought at the time of registration).

BEST FOR A QUICK WEEKEND

How much? £650, including B&B accommodation

Details: Three days of backcountry skiing in the Chamonix valley, ideal as an introductory or refresher course covering essential skills. Highlights include exploring the back bowls of Le Tour, avalanche transceiver training, skinning and glacier skiing skills. Participants need to be able to link turns on most snow types, and be fit enough to hike or skin two hours a day.

How much? £1345, including half board accommodation and transfers from Geneva

Details: New for 2015, this is a seven-night, six-day trip showing skiers the Three Valleys’ numerous untouched and easily accessible backcountry descents. Aimed at confident off-piste skiers, the BASI 4 instructors and IFMGA guides will touch on technique, as well mountain and avalanche awareness training.

Where? Realp to Engelberg, Switzerland

Details: A five-day hut-to-hut tour across one of Switzerland’s steepest haute routes. Most days will consist of a long ascent up the south face, followed by a steep and rewarding descent down the north face, making it ideal for tourers who are just as much about the down as they are the up. You’ll need to be fit enough to climb 1200m a day, and experienced in skiing slopes of 40º.

See our backcountry issue for a backcountry course in Niseko, plus a mountaineering masterclass